Dublin's Docklands: A Walk Through One of the City's Most Unique Destinations
The Hot Press Newsdesk

We take a closer look at some of the brilliant attractions that make the Dublin Docklands such a unique destination.

There was a time when a continuous cacophony reigned over Dublin’s famous Docklands. Back then, the port area was dominated by massive maritime industries. But change has been in the air for a long time. The ships still come into Dublin in large numbers, and trucks roll off and on with staggering precision. But the wider docklands area, which straddles both banks of the River Liffey, has been transformed into a vibrant business and tech hub.

Tech titans Google, Twitter and Facebook are changing the way we communicate from behind gleaming windows, set in shining examples of modern architecture on the southside of the river. Meanwhile, half of the world’s biggest banks and insurance companies trade in the sprawling financial services campus of the IFSC on the northside.

The docklands have also become a thriving cultural centre. North Wall Quay has long been home to the 3Arena (née the Point Depot), a state of the art concert venue that has proudly stood Liffeyside for over 30 years. In that time it has hosted an array of legendary performers, from Frank Sinatra to Nirvana, Elton John and U2 and been the site of world famous live recordings by icons REM, Bruce Springsteen and the late, great David Bowie. Closer to the city, Custom House Quay is home to one of the top-rated visitor attractions in Dublin. EPIC The Irish Emigration Museum is an interactive showcase of how the Irish diaspora made such a big impact on the world, with adventure, adversity and triumph featured in hi-tech galleries.

An absolutely fascinating and engrossing experience, EPIC provides an incredible insight into Ireland’s cultural heritage and the remarkable influence its citizens have exerted around the globe. Visitors can avail of the tours on offer, or else opt for the self-guided option (with headset) and get their “passport” stamped along the way. With loads to see, hear, touch and read, the interactive EPIC exhibition offers an unforgettable look at the unique achievements of Ireland and its people. It’s just one of the many gems in an area that continues to grow in popularity. Indeed, the docklands are filled with an exciting range of activities and attractions just waiting to be explored.

The iconic Diving Bell was the first project in Dublin Port’s ambitious plan to create a ‘Distributed Museum’ of attractions. The plan would be spread across the Dublin docklands and into Dublin Port itself, with the aim of preserving the port’s industrial heritage and history. Charlie Murphy from Dublin Port has been working on the project from the get-go.

”The idea is to open up the port to the city, and open the city up to the port,” he explains. Looking into the future, Charlie says that Dublin Port hope to be part of, “A heritage trail, where you can walk from the city down the quays, passing the Famine Memorial, EPIC, The Jeanie Johnston, The Diving Bell – and a number of other attractions that are soon to be rolled out – and finally arrive at the Port Centre.”

There are, it emerges, even bigger plans on the horizon.

“We have bought back the old Odlums Mill,” says Charlie. “We’re currently working on the masterplan for a larger museum about the history of Dublin Port and the lives of those who worked there.”

In 2015, The Diving Bell was raised onto a two-metre platform, allowing public access to a water feature which has been installed beneath the structure, accompanied by a series of interpretive panels explaining the historical, social and engineering significance of the Diving Bell, and immortalising its creator and the brave men who toiled inside. 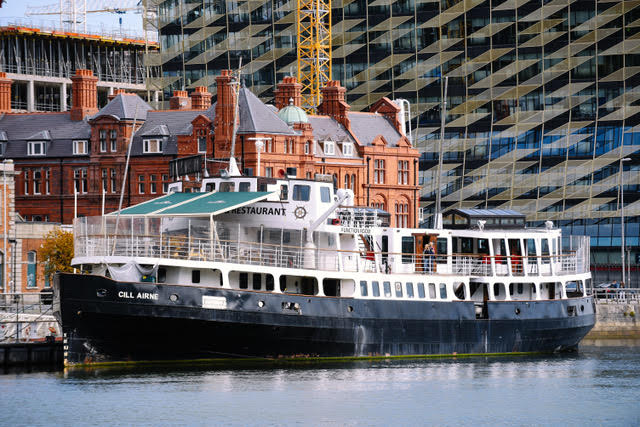 Dublin Port plans to make additional maritime attractions out of local landmarks within walking distance of the Diving Bell. The nearby Scherzer Rolling Lift Bridges have long been an iconic attraction for anyone travelling along the northside quays. Plans are afoot to construct a ‘greenway’ style pedestrian and cycle path from the northern perimeter of the quays to the east end of the port, allowing easy access to these fantastic port-side attractions.

At the Port Centre, on Alexandria Rd., close to the 3Arena, a ’60s quayside crane has been restored to its former glory, with an illuminated cabin for powerful night-time impact. It makes a striking addition to the city’s skyline. Standing in the shadow of Crane 292 is the Port Centre’s new Maritime Garden, now open to the public.

Following an absence of 35 years, Dublin’s historic No. 11 Ferry is returning to action on the River Liffey. First granted a charter in 1665 by King Charles II, the ferry was discontinued in 1984 following the opening of the East Link toll-bridge. The water-taxi has now been fully restored through a joint project between the Irish Nautical Trust, Dublin Port and Dublin City Council. Fares cost €2 per 3-minute crossing, and will soon be payable through the Leap card.

“The ferry was the only route for dockers on the southside to get to the northside to work on the ships,” Jimmy Murray of Irish Nautical Trust explains. “I remember the ferry as a child and as kids near the river, it was part of our livelihood. I was shown how to drive the ferry when I was young by Richie Saunders.

“Richie saved the boat from the scrap heap. He returned it to its original design, but in order to make it ready for modern day transportation, it needed to be completely refurbished. Dublin Port and Dublin City Council were amazing in helping out with the funding for that.

“With all the tech companies and the business at the IFSC, we have what we call the new-age dockers. It’s a real boom around the docklands at the moment, and we believe that this will be a service that flourishes.” As Jimmy notes, the ferry provides a unique glimpse into the capital’s past.

“The ferry offers a new generation on both sides of the city the chance to take a peek into the history of life on the River Liffey,” he says. “If they want to continue on the Maritime Training Course, then the ferry is there as their first introduction to this way of life. We have people with 30-odd years of vast sea-faring experience to pass on.

“There will be a few other journeys with the ferry coming up, but we have to keep them under wraps for the moment. We have a long term plan and it’s going to be very enjoyable, creative and historical.” oldliffeyferry.com

For a fascinating insight into Dublin’s dockside and tenement history, the North Inner City Folklore Project is an invaluable resource. An engrossing collection of artefacts, photographs and recordings of the lives of ordinary Dublin people, the project is the passionate undertaking of local Terry Fagan.

Since the 1970s, Terry has dedicated his life to preserving the stories of the community he grew up in. In doing so, he has amassed an astonishing collection of audio recordings chronicling the everyday lives of inner city Dublin. They are housed in a small Visitor Centre that gives people an opportunity to experience the hardships of tenement life, and the harsh reality of those confined to the nearby Magdalene Laundries and industrial schools.

Terry’s own history with the area runs deep. His mother was the last tenant to leave Corporation Buildings on Foley Street, and he and his father both served their time working at the nearby docks. His stories of the harsh life lived on the docks are illustrated with fascinating artefacts including docker’s badges, pay books, and examples of the tools of their trade. Terry is a fountain of fascinating knowledge about the area’s history and, if you give him the chance, he’ll spin stories that truly beggar belief.

The Irish national anthem, Amhrán na bhFiann, nearly met a fiery end at the hands of its composer, Patrick Heeney – saved only by the quick reflexes of its lyricist Peadar Kearney – metres from where the project is based. Terry will also regale you with tales of the notorious Monto, once the biggest red light district in Europe, and the (alleged) site of some eyebrow-raising tales involving both the King of England, and our own WB Yeats. The area was also surprisingly important to the revolution in Ireland, serving as a network for gathering and disseminating information for Michael Collins and others.

In addition to the Visitor Centre, Terry also runs the Red Lights & Revolution walking tour of the Monto area, which includes stories of the ladies who worked there, the Great Lockout of 1913 and the 1916 Easter Rising. It costs €10 and lasts two hours which, in the company of Terry Fagan, is money very well spent. folkloreproject.ie 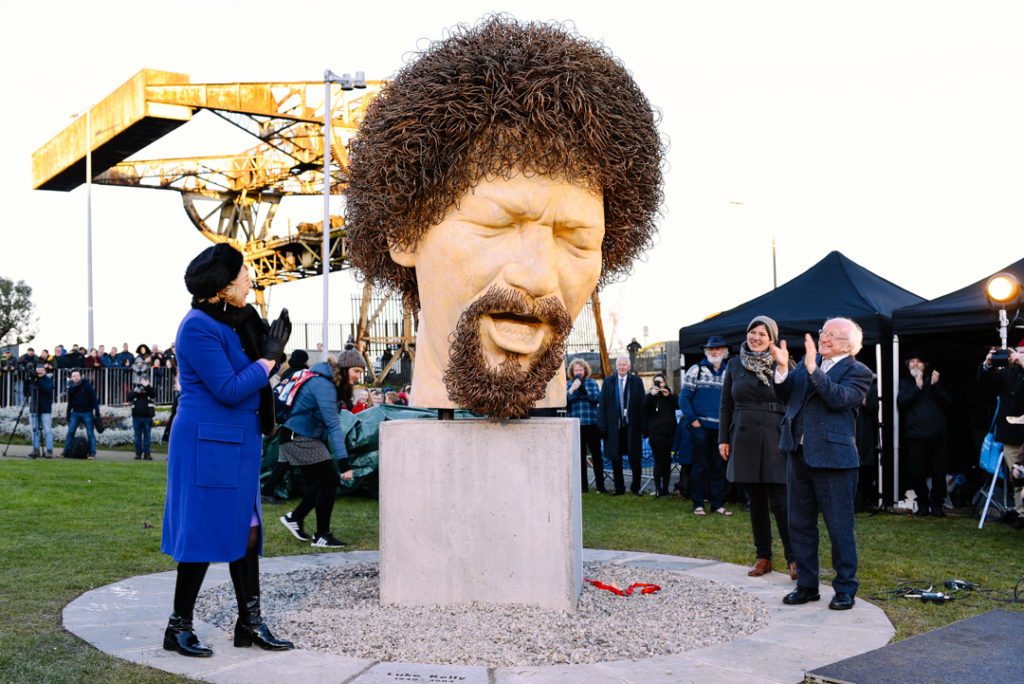 President of Ireland, Michael D Higgins, and his wife Sabina at the unveiling of the Luke Kelly statue at Royal Canal, Dublin. Wednesday 30th of January 2019. Copyright Miguel Ruiz

A short walk East from EPIC takes you to the Samuel Beckett Bridge. Turn left there, walk the length of Guild Street and just beyond Spencer Dock, close to the junction with Sheriff Street Upper, you’ll find the new statue of the great Irish folk singer Luke Kelly of The Dubliners. Created by sculptor Vera Klute, it is a marvellously impressive, larger-than-life head, adorned by Luke’s famous hair.

Ben Dunne Gyms: A Look Inside Their Newly Refurbished Lucan Branch
Interview with Andrew Porter: Looking Ahead to the Rugby World Cup
Bretzel Bakery: How They Became Dublin's Food Heroes

Stefanie Preissner: My Dublin Favourites
Warbler & Wren: Guardians of Some of The Best Coffee in Dublin - From Bean to Cup!
Sweet Treats: We Sample The Best Desserts In Dublin!
How The Exchequer Emerged as One of Dublin's Tastiest Gastrobars
'Winning Against The All-Blacks was a Dream Come True' Andrew Porter, in Best of Dublin 2019
The Hemp Company: Why Hemp Is The Plant For A Sustainable Future