Dubliner Francesca Griffin grew up in a creative household; her mother loves to knit and stitch – a love of textiles that was obviously passed down in the genes.

“I remember drawing a lot as a child,” says Griffin, who currently lives in Phibsborough. “It was mostly costumes and outfits on little characters. But as I became older, I became more conscious of my drawing skills – or lack thereof! – so it then turned into wanting to make the clothes instead of drawing them.”

Griffin studied fashion design in Sallynoggin College, which she describes as “a great course that really concentrated on the construction aspect of designing.” She then went on to NCAD to further her studies, graduating in 2016.

Griffin’s time in the fashion world has been rich and varied, with work experiences and challenges that have been both high-profile and deeply personal.

“I took a year out of college to intern in London with fashion designers Fyodor Golan,” she explains. “I learned a lot about the industry working for them as a start-up company – some good and some bad, but all of it was worthwhile. I have also worked in costume on a TV show in Dublin, which was great. It was a tough job with long hours but good people.” And then, of course, there was the most important fashion challenge of her life. 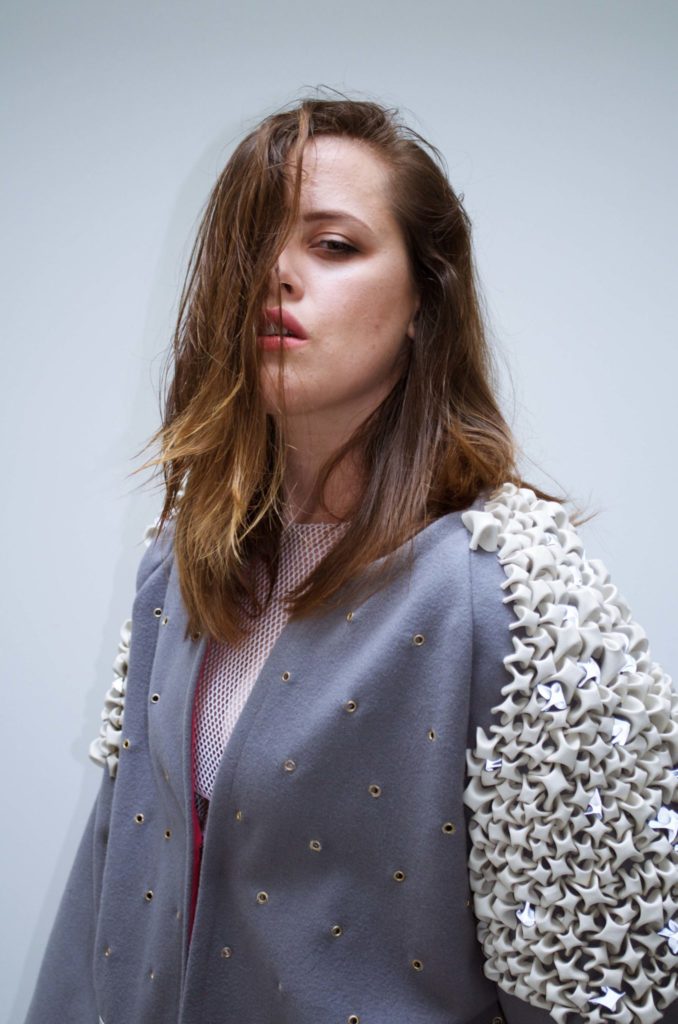 “I designed and made my own wedding dress a year ago!”

“I found through my studies that I loved to work with alternative materials,” she notes. “I incorporated items found outside the fashion studio. For my graduate collection, I ended up piecing together materials to make my own fabrics, such as crafting felt and hand-dyed zip ties. I have a tactile approach to fashion, with a heavy emphasis on fabrication, as well as sculptural and structural fabric manipulation.”

Griffin’s work feels extremely contemporary and fashion-forward, and it’s no surprise that her work draws from cultures and designers that embrace a blend of modernity and tradition.

“I’m a huge fan of Japanese designers such as Rei Kawakubo and Issey Miyake,” enthuses Griffin, “as well as designers Iris van Herpen, Alexander Wang and Yiqing Yin. Myself and my husband are hugely influenced by Japanese culture – he’s an architect – and we try to get over there every chance we can to soak it up!”

Griffin’s appreciation for Japanese fashion and culture has influenced her most recent collection.

“I was influenced by the sportswear silhouette and a more breathable, transparent base to work from,” she says. “The collection is called Kintsugi, which is a Japanese word for the idea of bringing together pieces of a broken object, enhancing the breaks with liquid gold. Some fabrics in this collection were reused from previous collections, and I thought this name really suited what I was going for.”

As a young designer, Griffin admits that forging a career in fashion design can be challenging, but she’s heartened by the support and solidarity she has found in Ireland.

“It can be hard when you leave the cocoon of college,” she reflects. “You’re trying to make connections in the fashion industry and get your business up and running alone. There are some amazing people, like Ruth who owns Om Diva boutique, who love to support Irish designers. It’s such a good start for many designers looking to sell in the Irish market. But a career in fashion design is hard work, so you have to live and breathe this industry.”

But for now, Griffin has more pressing things to think about, as she’s busy taking care of what is destined to be Ireland’s most fashion-forward baby.

“I just finished working on a custom wedding dress that was a lot of fun, my first wedding dress besides my own! Other than that, a three month old baby! I’m currently on maternity leave but plan to go straight into designing again soon, with the help of my daughter Lydia I’m sure!”

• Francesca Griffin’s latest collection can be seen and bought at francescagriffin.com. You can also find her on Instagram at @fgriffindesign.