The 20th anniversary Virgin Media Dublin International Film Festival kicked off this week, and luckily for you, there are still plenty of events, screenings and interviews happening up until March 6 – so get ready for a week of celebrating cinema! The hybrid in-person and online festival presents a jam-packed programme of features, documentaries, shorts and special events, including 100 features and 48 shorts representing 19 countries...

The Virgin Media Dublin International Film Festival began in fine form on Wednesday, with a gala screening of the celebrated Irish language feature An Cailín Ciúin, straight from its world premiere at Berlin Film Festival. Based on the acclaimed story 'Foster' by Claire Keegan and directed by Colm Bairéad, the achingly beautiful An Cailín Ciúin takes place in 1981 in rural Ireland, and tells the story of a quiet, neglected girl sent away from her overcrowded, dysfunctional family to live with foster parents for the summer. She blossoms in their care, but in this house where there are meant to be no secrets, she discovers one painful truth. Director Colm Bairéad attended the opening gala of VDIFF with producer Cleona Ní Chrualaoi and cast members Andrew Bennett, Carrie Crowley and twelve-year-old Catherine Clinch who plays the titular character.

It’s been an incredible month for the cast and crew of An Cailín Ciúin, as following its premiere at the Berlin International Film Festival, the film won The Grand Prix of the Generation Kplus International Jury for Best Film, and a special mention from the children's jury. This was a historical first for an Irish-language film.

Speaking about the award, director Colm Bairéad said: "It was truly an honour to have our World Premiere at the Berlinale next to so many wonderful films in the Generation Kplus programme this year. For An Cailín Ciúin to have won the Grand Prix is an overwhelming vindication of TG4, Screen Ireland and the BAI in their vision for indigenous, Irish-language cinema and its potential to reach far beyond our shores. It's also a beautiful tribute to the extraordinary work of our cast and crew, most especially the wonderful Catherine Clinch, who was the light that guided us through the making of this film."

Speaking at the festival opening, Minister for Tourism, Culture, Arts, Gaeltacht, Sport and Media Catherine Martin T.D. also congratulated everyone involved in An Cailín Ciúin as well as VDIFF at large, saying: “I would like to congratulate all involved with the Virgin Media Dublin International Film Festival on their 20th anniversary. It is such an exciting time for the industry at the moment, especially with the recent success of the Irish language feature An Cailín Ciúin in Berlin. The fact that the film is in our native language makes the award all the more special. This achievement also represents the importance of supporting our film industry."

On receiving the Volta award Adam McKay said: “I could not be more thrilled to have made it back to Ireland to join Minister Martin and festival director Gráinne Humphreys in person. The passion for film and the arts at Virgin Media Dublin International Film Festival and here in Ireland never mind the incredible Irish warmth and hospitality is second to none.” 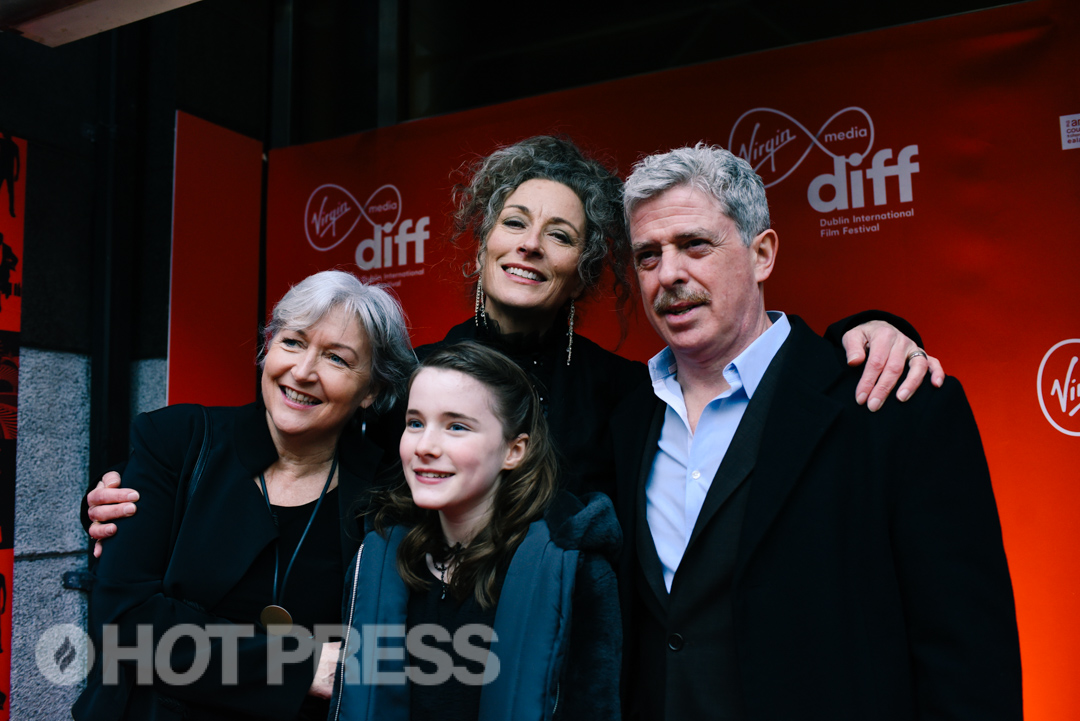 Other highlights for the first week of the festival include: the world premiere of the vital Vicky, Sasha King’s exclusive and intimate journey into Vicky Phelan’s fight to expose the truth of what happened in the Cervical Check Scandal for all women, but also her own personal fight to stay alive; the Irish premiere of Kate Dolan’s highly anticipated debut feature creepy and unsettling chiller You Are Not My Mother; composer and pianist Neil Brand’s live accompanied presentation of Laurel and Hardy; and Conor McMahon’s comedic vampire horror Let the Wrong One In on Saturday 26.

Comic book lovers and superhero film fans better have been quick off the mark for one of the Festival’s most highly anticipated screenings. On Monday, February 28, the Festival will have a special showing of Matt Reeves’ The Batman, starring Robert Pattinson. Festival attendees will be the first Irish audiences to see Colin Farrell as The Penguin before the film goes on general release in cinemas on March 4.

One of the highlights of the Industry programme, Virgin Media Dublin International Film Festival will present an exclusive online directing masterclass with Oscar-winning Danish film director Susanne Bier, hosted by acclaimed Irish director Neasa Hardiman. While Bier's films often play out against a wide-reaching global backdrop, their focus is intimate, carefully exploring the explosive emotions and complexities of familial bonds. This unique combination is part of the formula that has made her Denmark's leading female filmmaker and a powerhouse worldwide.

VDIFF is renowned for its insightful industry events that provide insight and illumination into the inner workings of this business we call show, and this year the casting event will see top Casting Directors Maureen Hughes, Shakyra Dowling, Susan Shopmaker, Barry Coyle, and Manuel Puro participate in a live online panel discussion on how they navigate the industry in a post-Covid world, casting your favourite films, and how to spot a star.

Marking the 20th Anniversary, journalist Tara Brady has written an oral history of the festival with memories of participants and audience members – a look back on some hilarious and heart-warming highlights of the Festival over its 20-year history.

Raising Films Ireland, supporting and advocating for the rights of parents and carers in the screen industries, will launch the ground-breaking results of its first report at Virgin Media Dublin International Film Festival. The Pursuit Of Change surveyed over 450 professionals and it reveals the shocking extent to which a ‘lost generation’ has been forced to choose between a career and home life because of a lack of flexibility and prejudice.

This year’s festival also continues its community research with several events focused on engaging with mature audiences to create community, connection and cultural engagement for older people. The Screen 8 programme this year has been extended to the older people in the community of Dublin 8 who, with the guidance of filmmaker Paul Farren, created their own short film which was premiered at the Festival.  Journalist Esther McCarthy will facilitate the Older Film Critics initiative which creates an informal education space for more mature people to engage with international and older-authored/classic and independent cinema. Participants from both initiatives will be joined by representatives from Public Health for an Older People On Screen Panel discussion on the importance of representation on screen, and the positive mental and physical effects of cultural engagement.

This year’s Festival also presents several films with HOH subtitles, or ‘closed captioning’; subtitles specifically intended for people who are Deaf or hard of hearing. These subtitles are shown on-screen in specially advertised screenings. The selection of films are: Róise  & Frank, Nitram, Worst Person in the World, Bergman Island and the second screening of My Old School.

The 20th Anniversary Virgin Media Dublin International Film Festival truly has something for everyone.

Irish language film A Cailín Ciúin submitted for an Oscar
Colm Bairéad on An Cailín Ciúin: "I've never made anything that was completely in English. That’s borne of my upbringing – I have Irish and I love Irish"
An Cailín Ciúin, KIN, Ciarán Hinds, Jessie Buckley, Moe Dunford win at IFTAs