Scandal, intrigue and era-defining style are all on the cards in House Of Gucci, Ridley Scott’s epic account of the iconic fashion family. Roe McDermott previews the hotly anticipated movie, which is already generating an Oscar buzz.

With Christmas breaks and possible Covid restrictions both on the horizon, there’s no better time to settle in with a wildly entertaining movie. Luckily, Ridley Scott’s House Of Gucci is arriving just in time to keep us utterly riveted.

The scandal-ridden real-life family drama is a thrilling exploration of three decades in the tangled history of the Gucci family. Coming to our screens 100 years after Guccio Gucci opened his first quality leather goods store in Florence, the film begins in the late 1970s, at a critical juncture in the Italian fashion empire’s history.

With the Gucci family’s global reach and soaring prestige in the fashion world ever in the ascendancy, problems are arising – personal, financial and legal. Financial improprieties, stifled innovation and a cheapening of the brand are causing headaches for Guccio Gucci’s two sons, the colourful and wily Aldo (Al Pacino), and his more conservative and detached sibling Rodolfo (Jeremy Irons).

But when Rodolfo’s timid scion, Maurizio (Adam Driver) falls in love with the beautiful and ambitious Patrizia Reggiani (Lady Gaga), Patrizia’s ambition and cunning change the destiny of the Gucci family forever. Conspiring with Uncle Aldo, pushing Maurizio to join the Gucci company and become the presumptive heir – and letting her own endless ambition drive her actions – Patrizia sets in motion a shift in the Gucci family, which will lead to many self-destructive choices from its sundry members.

Dodgy deals, scandalous affairs, battles for control and even consorts with a fortune teller (Salma Hayek) all add up to a relentlessly entertaining ride through three decades of the Gucci empire.

For the pivotal role of Patrizia Gucci, visionary director Ridley Scott (Alien, Blade Runner, Gladiator) approached Lady Gaga, who wowed audiences and the Motion Picture Academy in her debut, A Star is Born, for which she received an Oscar nomination as Best Actress, and won the Best Original Song award.

“I became curious about Lady Gaga, particularly after I saw A Star Is Born,” Scott has noted of the actress and singer. “I thought, now here’s a formidable talent – as an entertainer, as a singer, as a producer and the writer of her own show. A real engine of creativity. Then we met and I liked her immediately.”

The role of the aggressive and ambitious beauty Patrizia is a stark departure from Gaga’s turn as the innocent and loving ingenue Ally in A Star Is Born, but there are some thematic similarities between the two films. In both stories, Gaga plays a character who falls in love with someone with much more power and influence than she, only for her own ambitions and talents to emerge when thrust into this new world.

Both characters are also constantly fighting to maintain any semblance of self-empowerment and control in a world dominated by men calling the shots.

Scott and his producers were convinced that she was the only person to embody Patrizia Gucci.

Lady Gaga’s performance highlights the layers of complexity to the character, but she has admitted she was initially wary about playing a figure who could have been reduced to mere caricature.

“I’m an outsider and I marry into the Gucci family,” she recently said of Patrizia. “She’s been surviving her whole life and then she meets Mauricio and falls madly in love, and she starts to advise him in the business.

“When I first heard about it, I thought, ‘Oh, cartoon baddie’. I thought she was going to be some sexy killer after his money, and I felt this was uninteresting and that I’d seen it before, and that it was a tale as old as time. Also, I’m not interested in projecting that story about women, because not all women are like that.” 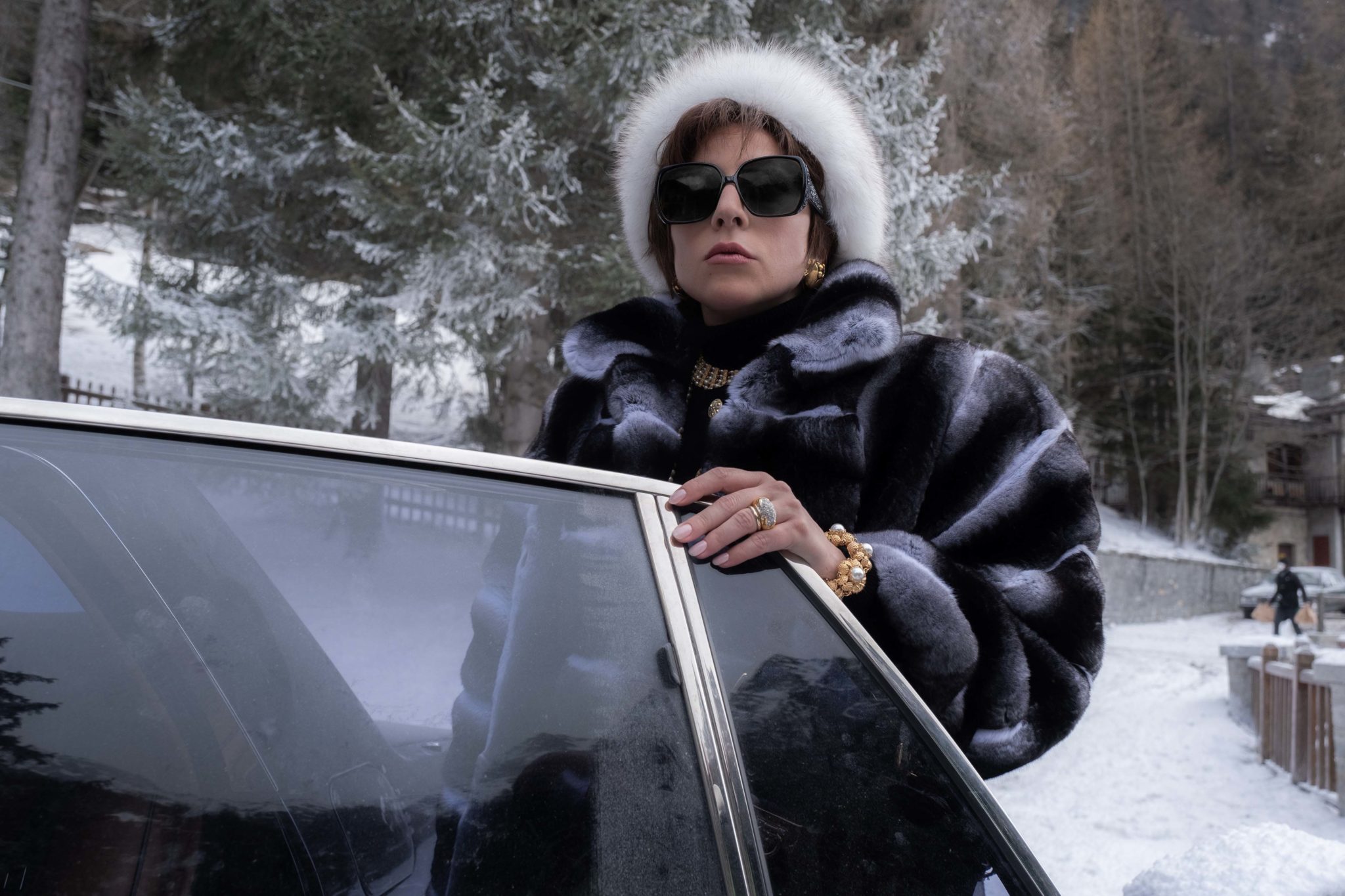 However, having read Roberto Bentivegna’s screenplay, Gaga found Patrizia’s motivations compelling. Likewise that the film explores the challenges, obstacles and sexism that Patrizia faced both within the Gucci empire and from the public’s perception of her.

“Before they see the film, some people might think Patrizia is a gold digger,” Gaga commented. “But when they got married, his family had turned their back on him. So, she didn’t marry for money, she married for love.”
Here, Gaga is pointing out that it was only after Maurizio inherited half the Gucci fortune from his late father that her ambition took hold and, even then, it emanated from a need for acceptance.

“She wanted so much to be taken seriously by the family,” the actress continued. “She was smart and felt that she knew what to do in order to move the company forward. But their acceptance was only an illusion. They were all using her to get to Maurizio and firm up their control. She was always an outsider, a woman in a man’s world, and there’s only so much she could do, as many women know. Their power can often go unnoticed.”

Lady Gaga found this gender dynamic intriguing and insightful, remarking that “like many human experiences in a world of systemic patriarchy, she thought she had power, but as soon as the men said ‘No you don’t’, she lost all her power just like that.”

These issues of power, gender and patriarchal systems have always been important to Lady Gaga, who has spoken out about her own experiences of sexism and misogyny, both within the music industry and at large. An advocate for survivors of sexual violence, the singer talked about being raped by a music producer when she was 19, after months of abuse, as part of this year’s The Me You Can’t See mental health docu-serie.

She has also spoken out about being body-shamed in the industry and being the subject of bizarre, misogynistic and transphobic rumours and attacks at the beginning of her career, all aiming to tear her down when her star was in the ascendant. But ever passionate and resilient, Gaga has consistently used her platform to speak out for people who are vulnerable, marginalised and abused.

In 2012, she launched Born This Way Foundation, a non-profit organisation dedicated to empowering youth, embracing differences, and inspiring kindness and bravery.

House Of Gucci is not only about gender and power, but also culture and assimilation. Gaga says that she felt deeply connected to the Italian narrative, given that she is Italian-American herself. She used her promotional tour for the film to speak eloquently and empathetically about the importance of immigrants and their experiences, crediting her heritage for her own work ethic and current success.

To Gaga, the House Of Gucci story is one of the ambition and cultural contributions of immigrants, which has become a vital conversation in America, given the explicit racism and xenophobia of the Trump administration, and the repeated devaluing, dehumanisation and targeting of immigrants.

“People can be very blind to it, and listen, I think the most perfect system is kindness,” she said to Ryan Tubridy on The Late Late Show. “It goes both ways and it doesn’t make anything go wrong. There is nothing bad there, it’s always good as long as it’s honest. And I think that people who are coming over from other countries are doing good hard honest work, and it’s elbow grease and it’s sweat and tears and it’s heart.

While Lady Gaga has a generous perspective on the film, its characters and the political messages held within, audiences may simply enjoy the glamour, scandal and betrayal that House Of Gucci has in spades. The family history is fascinating, and the tale of self-made Italian royalty and global tycoons self-destructing over family feuds, personal slights and power plays is endlessly fascinating.

The dysfunctional web of family, money and power makes House Of Gucci feel like a better-dressed version of Succession, mixed with a grand tradition of warring Tuscan families of the renaissance period like the Midici or the Sforza clan – great, powerful dynasties who couldn’t help but fight with each other, until they destroyed the very empire they had spent generations building. But most importantly, it’s a damn good watch.

“First and foremost,” Gaga notes, “this movie is a genuinely good time. A wild ride and every second is entertaining. Part of Ridley’s magic is that, with all his artistic ways, ultimately, he wants the audience to enjoy themselves.”

• House of Gucci is in cinemas now.

The Academy Awards nominations are in, and they are thoroughly inexplicable.
Film Review: A Star Is Born
Lady Gaga & Bradley Cooper Discuss Sound of 'A Star Is Born'
Cillian Murphy and Siobhán McSweeney make a showing in the 2022 TV Choice Awards Shortlist nominations
Lady Gaga to continue Hollywood success with Joker: Folie à Deux
Best of Ireland 2022: Cork star LYRA graces the cover of this year's Guide to Ireland's Finest!