The first in our series of six nights of discussions with the artists behind some of the greatest Irish albums ever recorded takes place tonight, with Conor O'Brien of Villagers leading the way.

Conor O'Brien of Villagers will kick off the Up Close & Personal series in the Grand Social tonight, as leading Irish artists discuss seminal albums. The series is presented by Hot Press, in association with Up Close and Personal Promotions, and comprises a series of live conversations with the artists behind some of the finest ever Irish albums.

Taking place across six dates, this intimate discussion series will involve a deep dive into a number of classic Irish albums with the artists who created them, talking about the background, the songs, the recordings and the mood of the times in which they were created. It promises the most fascinating insights into some of the greatest Irish albums ever recorded.

In tonight's opening event, Conor O'Brien of Villagers will discuss his acclaimed second album Awayland, which won the Choice Music Award, on its release in 2013.

Chatting to Conor O'Brien – who will perform some of the tracks from the album on the night – will be Paul McLoone, best known for his work over the past number of years with Today FM, and also as the lead singer with legendary Derry outfit, The Undertones.

Tomorrow (Wednesday) night will see Gemma Hayes discussing her beautiful, Mercury Prize-nominated debut album Night on My Side with staff writer Lucy O’Toole, who is one of the brightest stars in the Hot Press firmament. A musician herself, Lucy has a wide-ranging, in-depth knowledge of Irish music.

Sunday October 3rd we sit down with Mary Coughlan, to discuss her legendary debut album Tired and Emotional, which sold an astonishing 100,000 copies in Ireland. Mary will interviewed by Hot Press contributing editor Paul Nolan, who has been one of the magazine’s outstanding writers and contributors on matters musical, cultural and sporting since his first letter to the editor was published under the T. J. “Bolloxy” Ryan pseudonym back in the ‘90s.

The line-up for this initial Up Close & Personal series also features Andy Irvine & Donal Lunny, Tim Wheeler of Ash and Damien Dempsey discussing seminal albums, with all of the shows taking place live at The Grand Social Dublin between September 28th and October 20th (see full list of dates below).

“We’re really looking forward to the Up Close and Personal series,” Hot Press editor Niall Stokes said. “Over the course of six nights this month and next, some of the most important – and brilliant – albums in Irish music history will be revisited and explored in a unique way, with the artists themselves offering both personal and musical insights."

Only 50 tickets will be available per show – and a number of the nights are sold out, so grab the remaining tickets while you can! This special series of intimate conversations, is produced in association with Aidan Shortall of Up Close and Personal Promotions and is supported by the Live Performance Support Scheme and the Department of Tourism, Culture, Arts, Gaeltacht, Sport and Media. 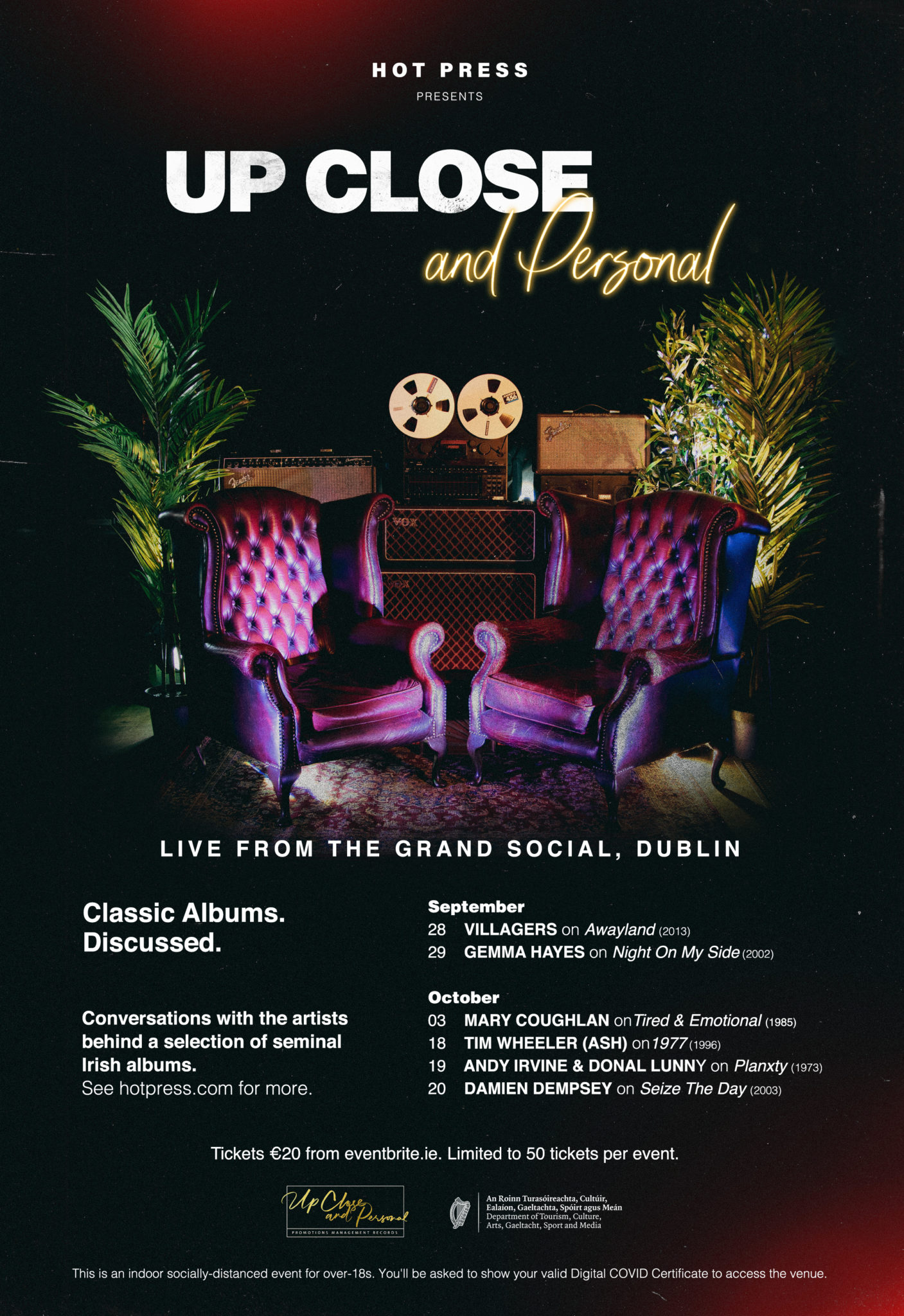 September 29th - Gemma Hayes on Night On My Side: Released in 2002, Night On My Side is Gemma Hayes’ beautiful and brilliant debut album. Produced by the legendary Dave Odlum, and packed with gorgeous songs, Night On My Side was nominated for a Mercury Music Prize. Gorgeously arranged and soulfully delivered, it established Gemma Hayes as an iconic Irish voice – and a very special songwriter indeed. (SOLD OUT)

ASH to celebrate 30th anniversary with homecoming gig at Ulster Hall, Belfast
The Hog: Why Are We Still Running Up That Hill?
In the new issue: Celebrating the 45th birthday of Hot Press with the 45s that shaped our world – and much more

Ash's Rick McMurray on Taylor Hawkins: "Every day he played the drums like it was his first festival, like he just couldn’t believe his luck"
Live Report: Up Close and Personal with Tim Wheeler at The Grand Social
Up Close and Personal with Tim Wheeler: Revisiting a classic 1996 interview with Ash
On this day in 1977: Bob Marley and the Wailers released Exodus
Ash announce global online gig to celebrate 25th anniversary of debut LP 1977
Live Report: Ash at The Academy, Dublin