Festival goers basked in the summer sun as they went on Shamanic journeys, revelled in spirituality and enjoyed the fantastic lineup. Photo: Miguel Ruiz

Born from the legendary Spirit of Folk festival, which ran from 2011 to 2016, SoFFT Productions’ SoFFT Nights aimed to take festival folk on a spiritual journey in Dunderry Park, Co. Meath. And it worked.

Between the Beehive and Pigsty stages, and all around the beautiful grounds, there were endless ways to enjoy the festival frolics.

Pop-up shops were dotted around the park, which is situated on a Shamanic ground. Attendees could buy vintage clothes and hand-crafted jewellery or get their tarot read. Workshops for singing and shamanic drumming drew in attendees who wanted to flex their own musical muscles.

On Day 1 of the festival, people were treated to an alcohol free event. Old friends and colleagues were reunited in the high heat of a July day, where spirits were high.

Before the crowds arrived, Dunderry Park was filled with the low hum of festival chatter. It was nice to hear these signs of renewal, after an extended period without festival events.

The grounds resembled a nature resort, with Dunderry House in the background, like a kindly grandmother. Attendees could roam freely, taking in the megalithic cairn, the lake and paths through the woods.

In line with the themes of mindfulness and spirituality, Amanda Healy was doing Tarot readings (and will be again at upcoming SoFFT events).

“There is beautiful energy down here,” said Amanda. "It’s a lovely place to work and everybody’s really nice."

It was at Dunderry Park that Amanda herself was first introduced to Tarot readings, as part of an induction into Shamanism. Her interest grew from there. On this occasion, she sent her last customer off looking very happy indeed.

“I think she walked away with some good answers. And a bit of hope and positivity,” she smiled.

Entering SoFFT Nights, ticket-holders passed through a COVID checkpoint, where everyone's temperature was taken. In the open air, masks were thankfully pocketed. A maximum capacity of 160 allowed the SoFFT Productions team to implement social distancing at every individual stage. Seats for the evening’s acts were designated prior to the event, with festival-goers assigned to pods.

Much of the emphasis of the festival was on spirituality and mindfulness. Workshops guided participants though a process for getting rid of their 'monkey mind' and uniting body, mind and spirit.

Slí na Croí drumming brought traditional Malinké dundun and djembe music from the villages of Upper Guinea in West Africa to Co. Meath for an afternoon, where attendants learnt to drum with Barra Ó’Flanniagh.

David Joyce, with the help of John Fahey, introduced the crowd to a Nigerian song called ‘Senwadende’ that they eventually managed to perfect. 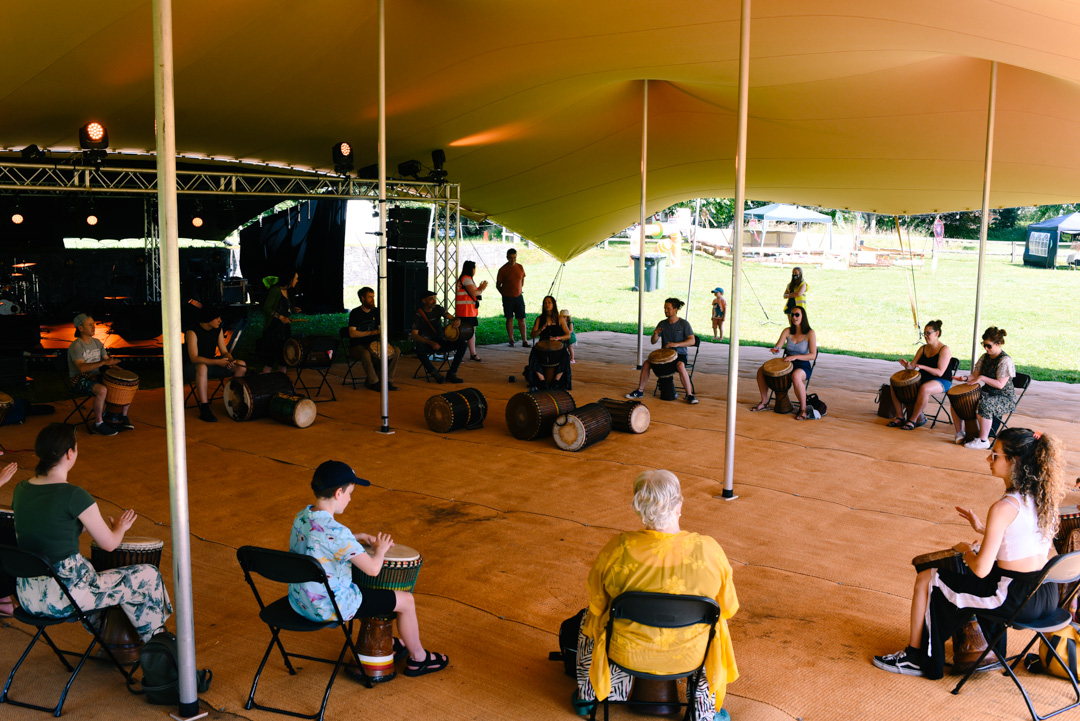 At the pigsty tent, Aideen McBride captivated children with her tale of Silly Jack, who it seemed could never get anything right. The Cabbage Patch was a special area for kids, tucked away in the corner of the site where they were read stories of mythology and enjoyed sound baths to realign the senses.

Fiachra Hayes and Nicole Daly from Ennis in Co. Clare were delighted to be attending a festival again.

“It’s lovely," said Nicole. "We just landed, and it’s brilliant. It's great to be back out at something outdoors. And the weather is so nice too.”

Fiachra – a musician himself in a band called Socks in The Frying Pan – was delighted with the line-up. “We saw Lemoncello a few years ago and they’re a great band," he said. "I don’t know Bunoscionn but I'm looking forward to hearing them. And Cormac Begley is just a phenomenal musician.”

Martin Duffy, the owner of the house over-looking the grounds, took people in the Beehive Tent on a Shamanic journey to find their power animal. He gave a history of the Shaman and tried to help people to shut off their monkey mind. Duffy spoke about the importance of nature, and the dangers of capitalism.

Mary Rose Buckley and John Fahey showered meditating (or sleeping) festival folk in harmonic waves with their gong baths. Buckley lit sage, shook chimes and played gongs along with Fahey to harmonise mind, body and soul. “Just go with it,” was Buckley’s message to those asleep at her feet.

Then, it was onwards to the live acts.

Lemoncello graced the stage just after 7pm and enthralled the crowd with their haunting harmonies and smooth, musicianly instrumentation. Laura Quirke may have been “cooking like a wee chicken,” as her band-mate Claire Kinsella said, but her voice was note perfect.

The pair gave a stirring rendition of ‘House of Cards', between bouts of banter. It was am occasion for the duo to re-ignite their EP Oil and Water which was released all the way back in March 2020.

Throughout their set, each song was delivered with poise and passion alike: make no mistake, Lemoncello are more than a bit special. 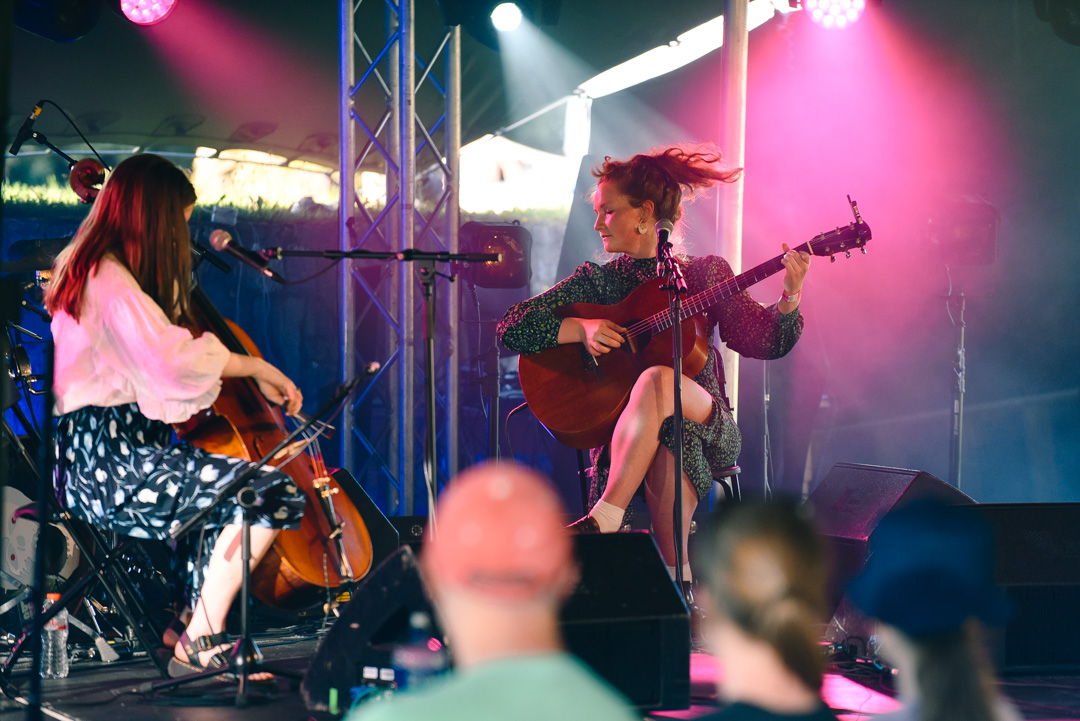 Bunoscionn rocked (and tradded) onto the stage next. They got the crowd leaping and bucking with their charming blend of trad, reggae, dance and rock.

The band, featured at every Spirit of Folk festival, were clearly fan favourites. They managed to get a seated and sober crowd excited enough to dance outside the tent, all in compliance with Covid protocols. They played an angelic cover of 'To Ramona' by Bob Dylan; and their original song ‘Stoned Hippy’ brought some, um, hazy calm to proceedings.

They finished with a brilliant cover of Bob Marley’s ‘Keep on Moving’ before the Kildare band asked the organisers if they could play one more tune. Given the signal, Bunoscionn set off again to the delight of the crowd. 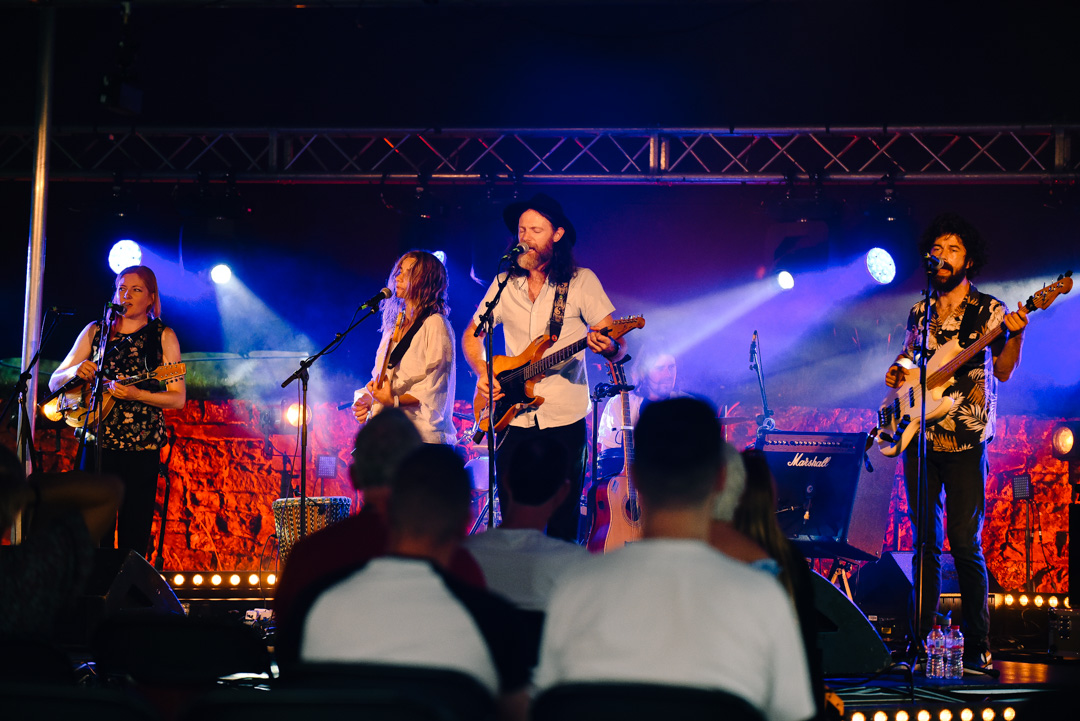 Cormac Begley brought the evening to a close. He took to the stage with his collection of concertinas, stories and lessons about his beloved instrument. Begley broke his first concertina of the night, an unfortunate habit he’s picked up, he told onlookers.

The highlight of Begley’s performance came in his set combining ‘Rolling in the Barrel’ and ‘O’Neill’s Cavalcade', the latter having been played by his ancestors on their way to the battle of Kinsale in the 1600s.

Begley made the concertina his own as he tuned the bellows into a percussion instrument and the keys into spoons, climaxing his set in style before being called back to the stage with chants of “One more tune!” It’s so nice to hear a genuine call for an encore again. 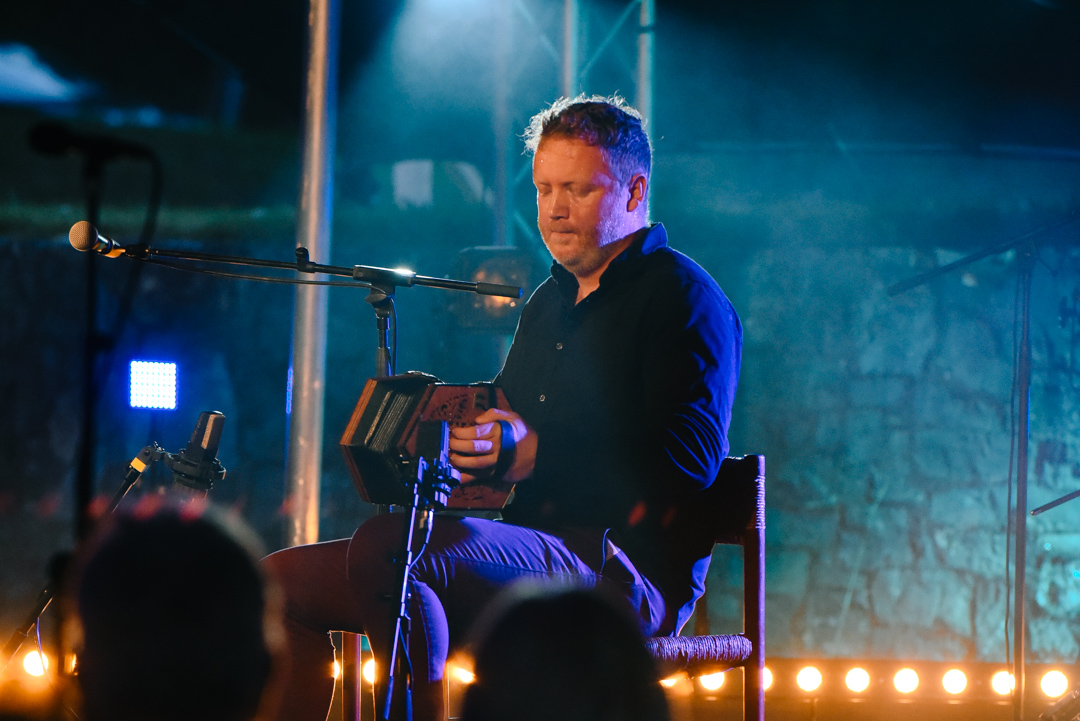 Overall, SoFFT Nights went off without a hitch. There was a palpable buzz in the air throughout the day, as people revelled in the excitement of that festival feeling, and the connections forged at events of this kind. Natasha Duffy, one of the festival organisers was pleased with how things had gone.

“We've had so much fun this week being back,” she said, “setting everything up and getting all the crew together and to be able to tell them, 'we have work for you', was amazing!

“To see people that would have worked on festivals for years back together is just brilliant. It's totally like having a family together.”

SoFFT productions consists of Caroline Duke, Conor Jacobs and Natasha, and was formed during the pandemic when the three of them all lost their jobs. Just under 40 people are working for SoFFT – who have a number of projects lined up.

Natasha designed the decor for the event and was inspired by the Spirit of Folk festival when putting it together with her colleagues.

“We wanted it to be rustic and to have a medieval feel," she says. "I’m really big into recycling and I’m starting a project called Smarter Sets in which everything is re-used. The flags were used 10 years ago. Everything here is custom made,” she said.

SoFFT Nights was a great day-out for young and old, and was a welcome reminder of where we are heading, post-pandemic. Well, hopefully. Most importantly, it was a chance for people to relax and shut off their monkey mind.

“The vibes today were super chill, and relaxing. It’s been amazing,” said Natasha.

SoFFT Nights: an interview with the organisers
SoFFT Nights returns for 2021 with Cormac Begley, Soda Blonde, and more
The International Drug Trade: What’s Really Going On?

Kamila Shamsie: "If you are Rishi Sunak, you are not the same as someone who has come on a lorry across many borders, just because the colour of your skin is similar"
Smile writer-director Parker Finn: "I wanted to use a smile to represent true evil, and allow people to wear a smile as a mask"
John Lennon's childhood home sold at auction for €312,000
New project facilitates dialogue between young Black adults and Gardaí in Blanchardstown
Catherine Martin secures funding for media scheme, artist spaces and Night-Time Economy
KNEECAP: "The only thing to do is take the piss – because if you don’t laugh, you’d be crying your eyes out"