See Change's Barbara Brennan on the Green Ribbon Campaign: "That little green ribbon is a symbol of hope for so many people"
btf

Over the last 10 years, See Change have been fighting to end mental health stigma across Ireland. Programme Co-ordinator Barbara Brennan tells us about her own journey with mental illness, and the importance of See Change’s Green Ribbon Campaign, taking place this month.

The impact of isolation, social-distancing and increased spare time, arising from the devastating Covid-19 pandemic, has left many people grappling with mental health issues. It has also forced many individuals to own up to aspects of their lives that had previously been brushed over in the rush of modern life.

All told, the effect has been dramatic – and many people are finding it difficult to cope. With that stark reality in mind, the work of organisations like See Change – whose aim it is to break down the stigma surrounding mental health – has never been so crucial.

This year, See Change are celebrating their 10th anniversary. Over the past decade, the organisation – and its dedicated team – have helped to shape the conversation about mental health and stigma across all aspects of Irish life, from the workplace, through the media into educational establishments and homes.

One of the centrepoints of the organisation’s ongoing work is their annual Green Ribbon Campaign, which encourages normal, everyday conversations about mental health during the month of October.

Among the key strengths of See Change’s particular vision is the way in which they involve people with lived experience of mental health problems – including their Programme Co-Ordinator, Barbara Brennan.

“I joined in 2009, just before we launched,” Barbara says with a smile, “and I became one of the very first ambassadors. I have an experience of severe and enduring mental illness previously in my life, as I have bipolar 1. In 2008, I was actually on life support, after trying to end my life. I had been very unwell since the age of 14.”

“But I survived,” she says, “and I got better – and I never knew that could happen.”

Inspired to take action, and help others in similar situations, she began sharing her story.

“I started off speaking at community events,” Barbara says. “I became the face of See Change back then – because 10 years ago, people weren’t talking about mental health. I became one of the first public voices on that. I was on The Late Late Show, and in all the national newspapers and on loads of radio stations that first year. It was an explosion of conversation that was so needed at the time.

“So, over the last ten years, I have stuck with that passion,” she continues. “Even if telling my story can help one person to not go where I’ve been, that’s enough. I’m also showing that people can, and do, get better – and that it’s possible to live a regular life, with all the normal stresses and strains, and still maintain wellness. It’s been a joy to work from being a volunteer, to a consultant, to then running the programme.”

As Barbara reveals, one of the most crucial issues surrounding mental health here is the enduring stigma.

“I believe that if society was free of stigma,” she reflects, “I may never have had the experience I had, to the degree that I had it. And I very strongly believe that we wouldn’t have as many suicides. A lot of people die not because they’re struggling with an illness or circumstances, but because they feel alone. They feel like they can’t reach out, or they don’t know where to go. They feel ashamed, or embarrassed – and that’s because of stigma.

The stigma around mental health, Barbara says, is a form of “prejudice and discrimination.”

“It’s deciding something about a person, just because of this label,” she insists. “It’s also labelling someone with their illness, when their illness is actually only one part of them. We don’t do that with any other illness. If you have cancer, or you have diabetes, we don’t say ‘you are cancer’, or ‘you are diabetes’. But someone will say ‘I am depressed’, or ‘I am bipolar’. Why should we have to say that? I have it, but I amn’t it. We need to start shifting the language.

“And while stigma itself is discriminatory, stigma itself doesn’t discriminate,” she adds. “So it doesn’t matter your age, your race, your sexual orientation, your background or your postal address – stigma can happen to anyone in society.”

Unable to take place as it normally does in May due to lockdown, the eighth annual Green Ribbon Campaign is now launching in October, and aims to bring an end to this discrimination. By wearing the Green Ribbon, an international symbol for mental health awareness, people can show that they’re committed to influencing positive change.

“When you wear the green ribbon, people know it’s okay to have a conversation about mental health with you,” Barbara explains. “You’re showing that you understand that mental health is important, and you get that it’s okay not to be okay. This is a grassroots movement looking to change society – one conversation at a time. That little green ribbon is a symbol of hope. When we started, we put out 33,000 ribbons. This year we’ve over half a million ribbons. As soon as we release them, they’re gone. It’s amazing.”

Research confirms that there’s still plenty of work to be done in fully breaking down the sense of shame surrounding mental health – particularly among young people and those in rural communities.

“The last time we ran the research, in 2017, we saw that one in three people have a close friend who has experienced mental health problems,” reveals Brennan. “We’ve all heard the numbers – that 1 in 4 people will be diagnosed with a mental health condition at some point in their life. But that’s slightly skewed – because how many people do you know who don’t go to the doctor if they have the flu, or if they have a lump? They’re not going to go to the doctor for a mental health problem. That statistic is only showing the amount of people who walk through the door.

Since launching 10 years ago, a positive change Barbara has noted is in people’s approach to the language surrounding mental health.

“See Change specialises in the language of mental health stigma,” she explains. “The kind of words that we see as stigmatising are ‘psycho’, ‘crazy’ or ‘lunatic’. People now understand that some of the words that we used to say are very unhelpful. There has been a huge change in the media too. Media representatives are being so much more responsible in how they have conversations, and how they portray people’s stories.”

After months of lockdown and social-distancing, Barbara Brennan reckons that this year’s Green Ribbon Campaign has arrived at a vital time.

“We’re more determined than ever this year, to make sure our conversation is as prominent as it would have ever been,” she says. “Now is an even greater time to be having those conversations about mental health – because people are finally engaging that this is part of their life.

“People have often experienced these feelings of anxiety or low mood, but they get distracted by other things in life – so they don’t give it the time, and they just try to step over it. But because Covid-19 has been such a prolonged thing, people have spent more time assessing how they are, and being honest with each other. From that perspective, this is the best time ever to have that conversation.”

• See Change is a Shine programme. The Green Ribbon Campaign is supported by The National Office for Suicide Prevention. 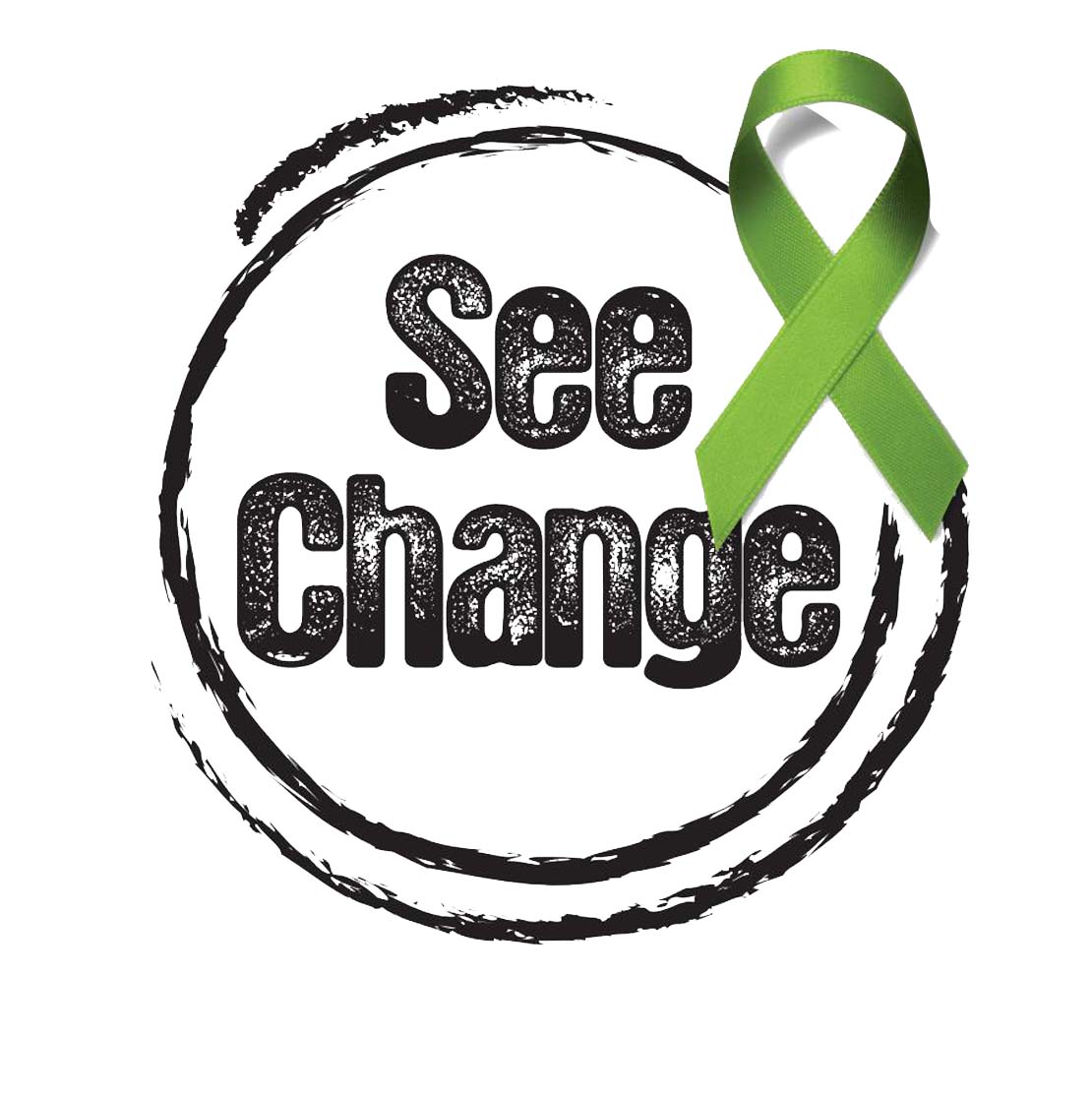 "My time with See Change has been so wonderful, a true time of growth of confidence for me. There’s nothing more that I love than raising awareness about Mental Health and Green Ribbon month always provides such opportunity to do so. It’s an honour to share my story.  Ireland has come a long way but we still need to do so much more. We cannot stop until everyone is free to talk of their mental health without judgement or shame."
– Abigail McDonnell (Launch Speaker)

"Being able to use my experience through See Change to further the conversation about mental ill health is so important to me. Stigma and mental health pejoratives are ingrained in our day to day lives. Even though we’re getting better at how we speak of and how well we understand mental ill health we still have a way to go. Green Ribbon month is another opportunity to move forward."
– Sinéad Keating, See Change Ambassador (Maynooth, Kildare)

"I think people need to be more accepting and understand that these difficulties aren’t temporary things. That going to therapy (if you can access it in the first place) isn’t a quick fix solution. And that by not approaching the subject with someone who you know is struggling just makes it more taboo and awkward in a way. Don’t be afraid to ask someone how they actually are doing."
– Jess McCaul, See Change Ambassador (Longford)

"My experience with See Change has been one of openness and acceptance. Being able to share my story in a safe way and help others is unlike any other thing I’ve been able to do, and with the other ambassadors it feels less lonely in sharing that experience and having someone to relate to."
– Miriam Dowling, See Change Ambassador (Dublin)

"Too often people the general population sees a person with a mental disorder as their disorder. As in, they are Bipolar, instead of, they have Bipolar. We need a change in perception and information on mental health issues."
– Rick Rossiter, See Change Ambassador (Celbridge, Kildare)

"I am a new ambassador which I’m very proud and excited about. I really want to help be the change in ending the stigma around mental illness. People identify with this campaign and it may help them get the support they need and also some comfort in knowing they are not alone. To help reduce mental health stigma, positive stories of mental health need to be portrayed on TV dramas, soaps etc. because we are normal people living normal lives and doing our best."
– Johnny Hunt, See Change Ambassador (Dublin)

Album Review: This Is The Kit – 'Off Off On'
Today FM Head of Music Brian Adams Announces That He Is Leaving The Station
Album Review: Eve Belle – In Between Moments

The Message: Donald Trump "has run the worst, most chaotic, most chronically dysfunctional administration in US history"
Track of the Day: Ferals – 'Separate'
Album Review: Bruce Springsteen - Letter To You
PREMIERE: lemin. – 'Good Looks Kill'
Dating in 2020: We’ve found the App to Help You Meet Your Perfect Match
Hozier, Ailbhe Smyth, Blindboy and more respond to controversial Mother and Baby Homes Bill
We use cookies to ensure you get the best experience on our web site - by using this web site you consent to our use of cookies. Read more »