Aiden O’Connor, the owner of Mike The Pies in Listowel, reveals the secrets behind the staggering success of his award-winning live venue.

Mike The Pies has fast become one of the most unique and revered live venues in Ireland. As the recipient of prestigious awards from both Hot Press and IMRO, the 100-capacity space has welcomed an eclectic selection of top Irish talent, international legends and promising rising stars to Listowel.

Owner Aiden O’Connor grew up reading Hot Press, fuelling his love of rock ‘n’ roll. “People come for the intimate setting,” he reflects. “It’s always incredible to see a big act in a small venue. We bring in a serious PA system from O’Sullivan Sound in Killarney, and we’ve a great engineer, who everyone knows – and loves – as Cookie. With our low ceiling and the right equipment, the sound in Mike The Pies is great.” Of course, the atmosphere in Mike The Pies – courtesy of its famously loyal fanbase – has also played a major role in transforming the bar into one of the most acclaimed venues in the country.

“I’ve been doing gigs here for four-and-a-half years now,” Aiden tells us, “and I have a list of everyone who’s been at each gig. I started putting them in order, to see who has attended the most. So, when there’s a big gig that’s going to sell out straight away, like Danny O’Reilly from The Coronas earlier this year, I invite the top 100 first. It’s the fairest way – I have to be loyal to the people who’ve supported us.”

Having become a haven for music fans from around the county and beyond, Mike The Pies is hard to beat for an intimate performance.

“For the quieter acoustic gigs, we encourage people not to talk through the songs,” Aiden says. “We had John Power from Cast in recently, and you could hear a pin drop during his set. It’s so important that people respect the artist and the people around them.” 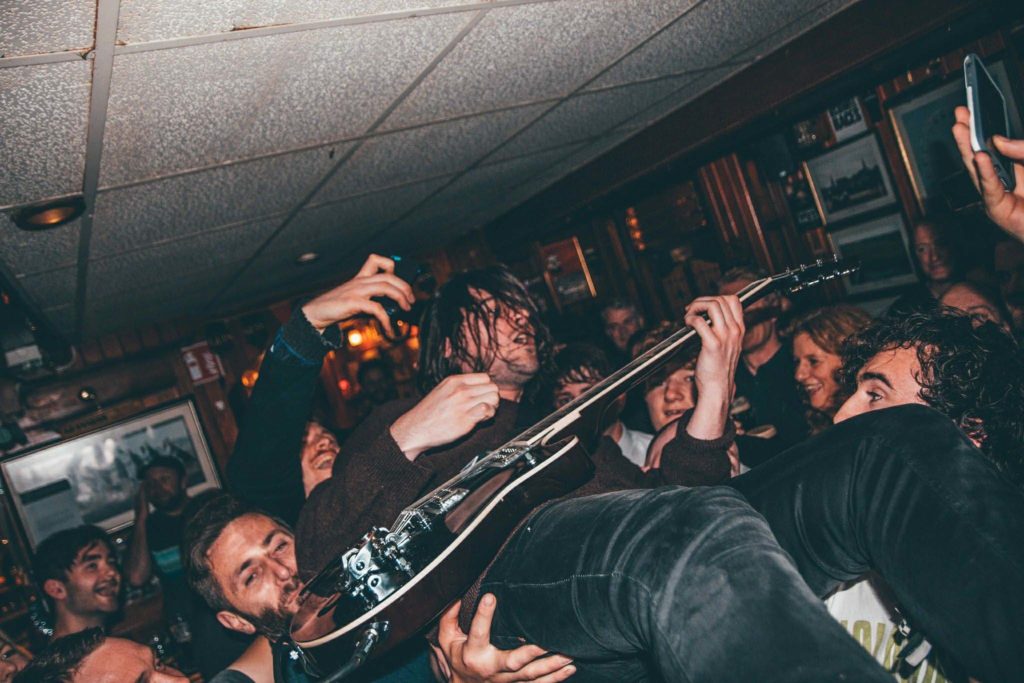 Fangclub in the midst of a typically blistering live performance

Of course, the crowds aren’t always quiet – especially when some of Aiden’s favourite acts are in town.

While a host of Irish stars have graced Mike The Pies, including Christy Dignam, Damien Dempsey and Mick Flannery, one legendary Cork band played a special role in its history.

“Our first gig here was The Frank and Walters in March 2015,” Aiden recalls. “I’ve been a Franks fan for years, so that was incredible to me – that they’d take the time to come across and get it started.”

Aiden’s great-grandfather certainly couldn’t have guessed that his pub would go on to host some of Ireland’s biggest stars when he first opened its doors over 100 years ago. Having been in the O’Connor family for generations, tradition remains central at Mike The Pies.

“I was reared here,” Aiden smiles. “When I was young, I spent all my time hanging around the bar. I then spent five years in Manchester before coming back to Listowel, and my father asked me to take it on. I was honoured, because he had really built it up, and created a great family atmosphere in the bar. I wanted to add my own touch, so I tried the music. Four-and-a-half years later, it’s a dream come true.”

In the run up to Christmas, Mike The Pies have one of their most exciting line-ups yet, including An Evening With Alan McGee, October 18; Ardal O’Hanlon, 24 (sold out); Hudson Taylor, 31 (sold out); Columbia Mills, November 8; The Riptide Movement, 15 (sold out); Thanks Brother, 21; The Blizzards, 28 (sold out); Block Rockin’ Beats, 30 (sold out); HamsandwicH, December 6 (sold out); and Otherkin,13. Oh, and another very special one indeed...

• To keep up to date with Mike The Pies’ latest gig announcements, see mikethepies.com, or find them on social media.