With its finger on the pulse of post-Good Friday Agreement Belfast, and offering an intoxicating streak of magical realism, Jan Carson’s The Fire Starters is one of 2019’s top reads.

East Belfast is an interesting place. As a hub for mainly Protestant labourers working in the shipyards throughout the 19th and 20th centuries, the area has for decades been steeped in loyalism. It’s also an area full of contradictions. Despite being associated with the grind of manual labour, the area has produced some of Ireland’s greatest ever cultural figures, including Van Morrison, Gary Moore and CS Lewis. And, despite being a staunch unionist stronghold, the fact that it elected the centrist Naomi Long as its MP from 2010-2015 showed that no one political outlook laid claim to the area.

Contradictions are at the heart of Jan Carson’s new novel, which takes place in east Belfast during the summer of 2014. The novel has some searingly accurate depictions of contemporary Belfast. She shows us a city on the brink of chaos – with the marching season at its height, bonfires raging throughout the city’s ghettos, poverty increasing, and the presence of violence never far away. She also shows us the city on the brink of opportunity – where increased tourism, foreign direct investment, and an emboldened artistic, cultural and social scene have made citizens dream of a newer, more stable place to live. “This is Belfast. This is not Belfast,” she writes in one of the early chapters of the novel, and you grasp exactly what she means.

But how does an author manage those contradictions? For Jan, it meant turning to magic realism (a style of writing whose very name is, itself, a contradiction).

“I remember walking around the city in the lead up to the 12th and looking at the sheer size of the bonfires,” she recalls, speaking on the phone from Belfast. “And, as a magic realist you’re always looking for these kind of cross-over points between the realist world and the fantastical. And when I saw the size of those things, I just started playing with this idea of them being beyond real, or hyperreal. Previous to that, I’d been in America giving a talk about bonfires and the people in Washington DC actually thought it was an example of magic realism! They couldn’t get their heads around a 70 foot bonfire in an urban environment. So that was a starting point between combining magic realism and the culture in east Belfast.”

The Fire Starters follows the stories of two fathers in east Belfast. Sammy, an ex-paramilitary soldier who fears that his penchant for violence may have spilled over into the mindset his teenage son. And Jonathan Murray, a doctor who is transfixed by a real-life Siren in east Belfast, enters a relationship with her, and is then left to raise their half-human, half-Siren child alone. Much of the plot is driven by an initially unidentified ‘fire starter’, who releases viral videos on the internet encouraging people to set fire to buildings and public spaces across the city, in response to the government’s decision to limit the size of 12th of July bonfires. As Jan explores, the propensity for nihilistic destruction has always been a factor in the city, especially around parade season.

“There’s places that are synonymous with things kicking off,” she says, “and there’s places that – at a certain time of year, with regularity – will have an outbreak of trouble. When you live on the edge of one of those spots – you see it. Already you have kids pulling out pallets for bonfires. You feel the tension building. There’s a kind of cyclical nature to this. When it gets towards the end of the summer, it’s almost like putting away the Christmas decorations, saying ‘Awh well, that’s it for the troubles this summer.’ But then sometimes it feels like it could maybe tip into being a long-term thing. No one in their right mind wants that – but the tension is there.” 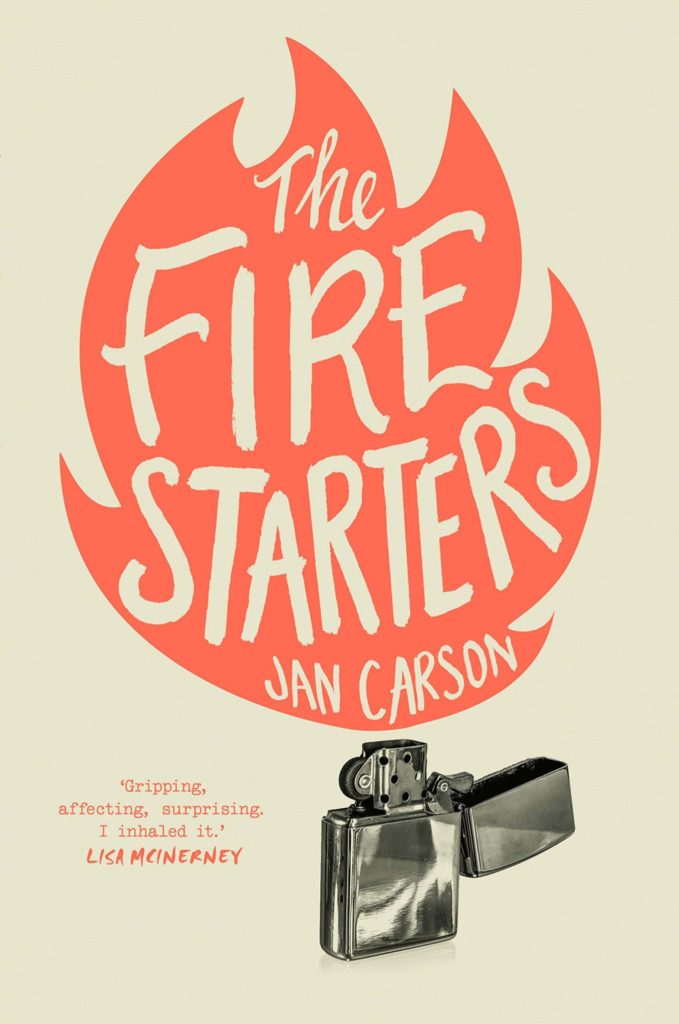 People who live in Northern Ireland know this well. An important article on suicide in Northern Ireland and the legacy of the troubles since the Good Friday Agreement – penned by the journalist Lyra McKee – indicated that generational trauma was a huge factor in how parents passed on experiences of conflict to their children.

“There’s generational trauma there definitely,” she nods, “but there’s also a myriad of contemporary issues. A bug-bearer of mine is that we’re not writing enough about contemporary Northern Ireland. There’s still an enormous focus on the past – which is brilliant – but we also need to focus on the present because if we don’t then we’re not addressing the issues which are pertinent now. Things like unemployment, gentrification in east Belfast.”

There’s also a sense of young people being left behind and alienated from the stagnant politics of post-GFA Northern Ireland. The ‘fire starters’ in the novel tend to be young people who aren’t out to prove some political point, but who act out of boredom and disillusionment with their place in society.

“I can’t speak for every community, only what I see, but there’s not that many avenues for people to express themselves,” says Jan. “That’s why recent cuts to the arts budget, especially the cuts to the community arts budget, are so devastating. Those were ways in which people could voice their frustrations, talk about their aspirations.”

With the rise of two party politics in Northern Ireland and exhausting debates about legacy, so much of Northern Ireland’s dialogue – political and social – has centred on trying to make conclusive narratives on complex issues. By contrast, The Fire Starters revels in inexplicable magic and indulges in anecdotes about superhuman children. It doesn’t insist on easy conclusions. It must’ve been liberating to write?

“I think so. And in my opinion, it is reflective of what a story is in Northern Ireland,” says Jan. “There’s not one story here. Language is ambiguous, even the magic realism in the novel is ambiguous. It’s all about how you create the story – that’s how Northern Ireland has been for a long time. My friends who come here say, ‘Why isn’t there a museum about the troubles in Northern Ireland?’ And I think, ‘Well, which version are they gonna put there?’ There’s so many versions, so many emotional responses.”

UK-wide issues have laid bare that ambiguity and, unfortunately, made it an issue again. “There was a period there, for maybe the last 20 years, where that ambiguity was allowed. People could create their own identity and sense of what it meant to be from here, and that was OK. But the threat of Brexit and hard borders means having to pick which side you’re on. And, for me anyway, that’s really constrictive. The ambiguous territory is far more interesting.”

More optimistically, east Belfast has gifted us with fantastic writers like Wendy Erskine and Lucy Caldwell in recent years.

“Increasingly, many of those writers are coming from the roughly Protestant tradition,” says Jan. “A lot of those voices had been lost. Interestingly, my Masters was in Theology and I realised a lot of the reasons had theological associations. Protestantism has a huge fear of the arts. I was brought up strict Presbyterian with the belief that telling stories equalled making things up, which equalled lying. So the generation preceding me – their religion didn’t allow them to tell stories or create art in a way that the Catholic tradition did, which has a huge tradition of storytelling, music and visual art. I also think there’s a case – and this might be a sweeping generalisation – about the ‘Protestant work ethic’. Increasingly in my community groups, I meet some older people who are incredibly talented artists, but they just never had the chance to do it because they were working round the clock.

“And there’s a thing that happens when you don’t see your story being reflected in the literature. You start to think, ‘Maybe my culture’s not worth reflecting’. I think that’s quite sad. But now the pendulum’s swinging and there’s more voices coming which aren’t talking about Orange Men and parades, but the wider experience of what it means to be a Protestant.”

The Fire Starters is out now, via Doubleday, Jan Carson will take part in an event with writer David Keenan, called ‘Unseen Belfast’, on May 19 at Smock Alley Theatre.

NI Music Prize delivers a brilliantly successful night celebrating music from Northern Ireland
'Bird On The Wire: The Songs of Leonard Cohen' to be performed in Belfast
Music Book of the Month: Paul Brady, Crazy Dreams