Plus, Jack Lukeman has also announced his first ever headline gig for 3Arena in November 2022. It promises to be an exciting 14 months!

With Ireland slowly but surely lifting its Covid-19 restrictions, Kildare singer-songwriter Jack Lukeman began to notice a fundamental shift in the way in which community was being valued. During the months of lockdowns, we had seen neighbourhood supports and charitable actions being nurtured and embraced. Now, however, much of that essential gratitude for human connection appeared to be waning.

Jack L is on a campaign to revive that ailing spirit. With this in mind, he has announced a hybrid entertainment livestream show, titled Postcards from the Edge – an innovative progression from the hugely successful weekly internet-based livestreams he ran during the course of the pandemic. Having connected with an entirely new audience during the various lockdowns, hosting digital fireside chats with people from all over the country, Lukeman is now inviting members of the public to submit their own stories for his upcoming streaming series. The pandemic has transformed concerts and cultural events over the past 18 months. But Jack is adamant that the generosity, which kept us moving forward as the ravages of Covid hit, must not be extinguished.

Supported by An Post and non-profit The Wheel, Postcards from the EdgePlus, he’s announced his first ever headline gig for 3Arena in November 2022. It promises to be an exciting 14 months! is set to be one of the most heartwarming and intimate livestream shows around. Having found solace in songwriting and exploring the breadth of internet connection from a hill in Laois, the performer also observed how loneliness affected members of the public in vastly differing ways. While some found brand new careers and hobbies or finally took the time to pause and spend time with family, others felt completely isolated. Finding strength himself from friends and family, Lukeman decided to use his musical skills for the greater good, supporting both his Irish audience going through hardship and Irish abroad who craved their homeland.

Tune in each Wednesday to hear Jack Lukeman meet local heroes, sing songs with musical guests and celebrate the public’s moving stories after a truly life-changing year in Ireland.

“I was in the middle of writing an album when Covid happened,” Jack L tells Hot Press. “I was down the country away from it all. Effectively, I got trapped on my own in Laois, so I started doing regular livestreams every week. It became my social life and an anchor to connect with others as well. With this new show, I’m trying to get out of my comfort zone – but it’s also about saying thank you to those people.

“Nobody can say they didn’t go through some kind of existential crisis at that time, when we didn’t know what was happening with the world,” he adds. “We had nowhere to go all of a sudden – and we all shared that traumatic experience. Postcards from the Edge is about trying to refocus and hold on to that community spirit that seems to be slipping away as we come out of the pandemic. People are wilfully forgetting that spirit, to go back to ‘normal’. But how is it normal to have your life completely consumed by your job and materialism? At the end of the day, a meaningful life all boils down to really connecting with those who surround you.” 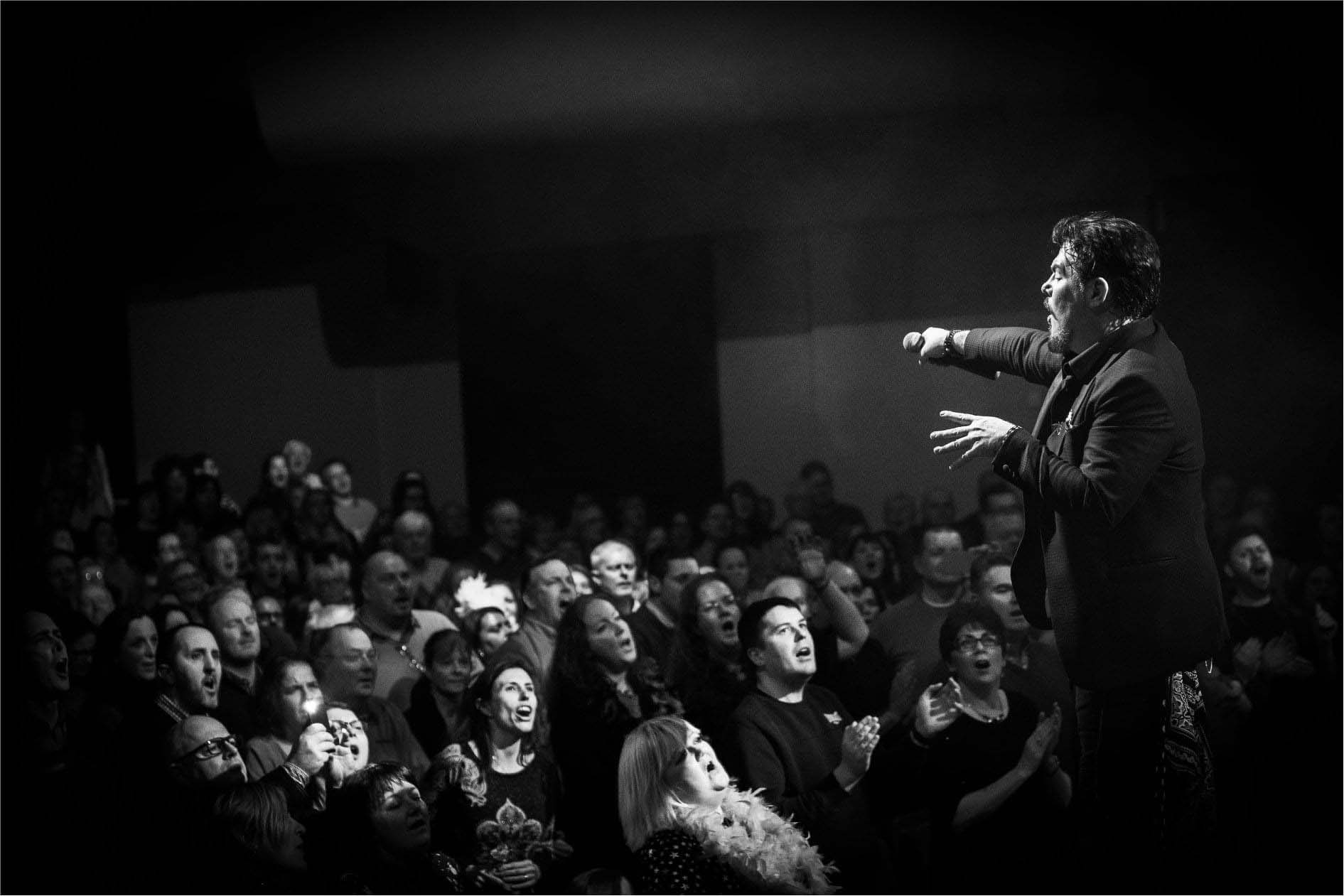 Jack is a brilliant singer and performer, and his performances will be at the heart of Postcards from the Edge – with fellow musicians, actors, poets, comedians and visual artists joining in the 90-minute show. Each broadcast will focus on differing themes, including Youth on Hold; Past Times; LGBQTI+; Isolation and Community; and Food for the Soul. In preparation, Lukeman has delved deep into these diverse areas, encountering tales of both joy and sadness.

“For the LGBTQIA+ themed week, I went to interview young members of the community, who had their first exhibition in the National Gallery,” Jack notes, referencing the ongoing, emotional ‘Queer: Mind, Body and Soul’ project.

“I felt so privileged to see their art. That was a really moving moment, hearing about their experiences of creating during Covid. All artists found a strange block, trying to make art in a global pandemic. It’s like something that steals half your brain. As much as you might think the isolation would help with creativity, it’s that lack of social interaction that dampens it more than anything else.”

Aa Ireland’s main provider of postal services nationally and globally, An Post will be providing pre-paid postcards across the country to allow the nation to share their stories of post-traumatic growth with Jack. Fascinatingly, the pandemic inspired a comeback for postcards, with more than five million specially-printed cards distributed by An Post to help families, friends and neighbours connect in a way that defied their isolation. It became a call to reconnect during the height of Covid. Who would have thought that a simple piece of mail could carry such a weight of human emotion?

Words and images, friendly greetings, expressions of love and care, anxiety and despair, were all relayed at a time when people were physically forced apart. Harking back to An Post’s COVID effort, postcards are now being pressed into service once again as the country emerges from the pandemic and tries to find a way forward based on what was learned, lived, lost and rediscovered. Everything from paintings, poems, music, Tik Tok videos, and letters with messages of love and support will also be welcomed as submissions to Postcards from the Edge.

With the shows featuring appearances from vital organisations like The Muslim Sisters of Eire, An Gaisce and Men’s Sheds, it’s no surprise that The Wheel were eager to support the project – which was made possible by the Government’s Live Performance Support Scheme.

For the uninitiated, The Wheel is Ireland’s national association of charities, community and voluntary groups and social enterprises. With a membership of over 2,000 organisations, it is both the representative voice of, and a supportive resource for, the non-profit sector. It offers advice, training and advocacy for non-profit organisations of all types and sizes.

Jack Lukeman will also be performing each week with Music Generation’s Re:Centering Ensemble members and musical guests, including The X-Collective and Jack Curran. Music Generation is Ireland’s national music education programme, which aims to ensure that all children and young people have access to vocal and instrumental tuition locally. Meanwhile, Dunamaise Arts Centre runs the re:Centering project in collaboration with Laois County Council Arts Office and Music Generation Laois. Re:Centering is fuelled by a combination of free, live events between now and April 2022, headlined by Jack L and encompassing artists with strong connections to Co Laois.

As if all of that wasn’t sufficiently intriguing, Jack Lukeman has just announced his first headline show at 3Arena. The announcement follows the success of Jack’s 2020 album Streamed - The Best of the Lockdown Sessions - Vol 1 and the immense growth of his online fanbase.

“After many years of travelling the high roads and the byroads of planet earth, I’m now asking people to travel to see me in the 3Arena on November 25th 2022. Needless to say, it’s very exciting to reach this point. This is the gathering and party of the hundreds of thousands of people who joined me during the lockdown sessions to celebrate the resilience and joy of live music.”

Tickets for Jack’s headline show are on sale on Wednesday September 29th at 9am from Ticketmaster.ie. With a career spanning 25 years, fans can expect a spectacular live performance from one of Ireland’s most enigmatic and magnificent performers, playing his greatest hits alongside live favourites.

Arcade Fire announce 3Arena Dublin date with Feist
Rod Stewart stops by Glasnevin pub Gravediggers
Róisín O: "Going into the music industry at a young age, I was naive - I look back at me in 2012, and I was just a kid"