Imelda May brings dreamy vocals to a sing-a-long in Wexford pub
Imelda May with the staff of The Coal Bunker Bar in Wexford.

Frequenters of the Coal Bunker in Wexford were treated to a show by the internationally renowned musician.

Internationally renowned Irish singer and musician, Imelda May, shocked the locals in a small Wexford pub as she joined in with their sing-a-long.

In a video from the pub, the singer is dressed in her signature all black, joining in with a circle of locals to sing a few old traditional Irish tunes. 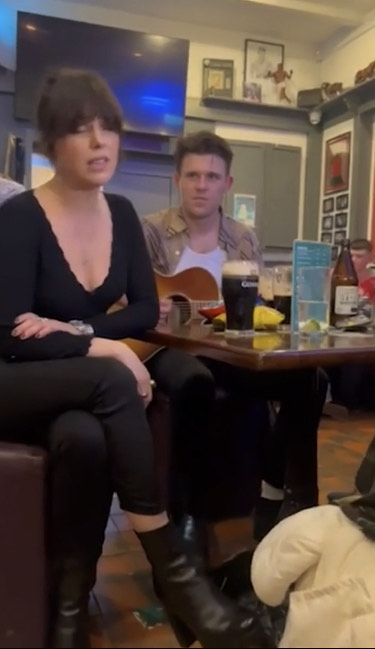 Imelda May joins sing-a-long at The Coal Bunker.

The singer was in Wexford to support her friend, Niall McNamee, who was playing a last-minute gig to finish out his Irish tour, ahead of his return to the UK.

Larry Coleman, owner of the pub, explained the situation further, saying: "Niall got in touch with us wondering could he come and play before he got the ferry back to London.

“He sold some tickets and then invited all the locals in from the front bar and put on an amazing show. He played all originals and he’s as good as you’ll get now really. Imelda May is a great friend of his and she came along as a special guest and got up on the stage to do a song or two," Coleman continued.

"Then afterwards she stayed on for a session. They all went into the front bar and had a few drinks and a few of the locals here brought out their instruments and it was a brilliant night. Niall joined us for dinner then on Monday before heading back to London on the boat.”

Larry added that both Niall and Imelda had such a great time at The Coal Bunker, that they're in conversation to have them both back to play early next year.