He was a leading light at the infamous Manchester club, Hacienda, rubbing shoulders with the top brass of the Manchester and Liverpool scenes – including, as it turned out, a young Courtney Love, at that moment when she discovered that rock ’n’ roll would be her metier.

Former Hacienda DJ Dave Haslam's latest book is called Searching For Love: Courtney Love in Liverpool, 1982. It explores the early exploits of the future leader of Hole – and wife of Kurt Cobain – in both Liverpool and Dublin. However, Haslam has other strings to his bow – and memories worth exploring. Having been involved during the glory days of the Hacienda has has many a tale to tell – for example, being responsible (allegedly!) for the formation of Oasis, having tea with Morrissey – and much more. So, without further ado, let’s get down to business... 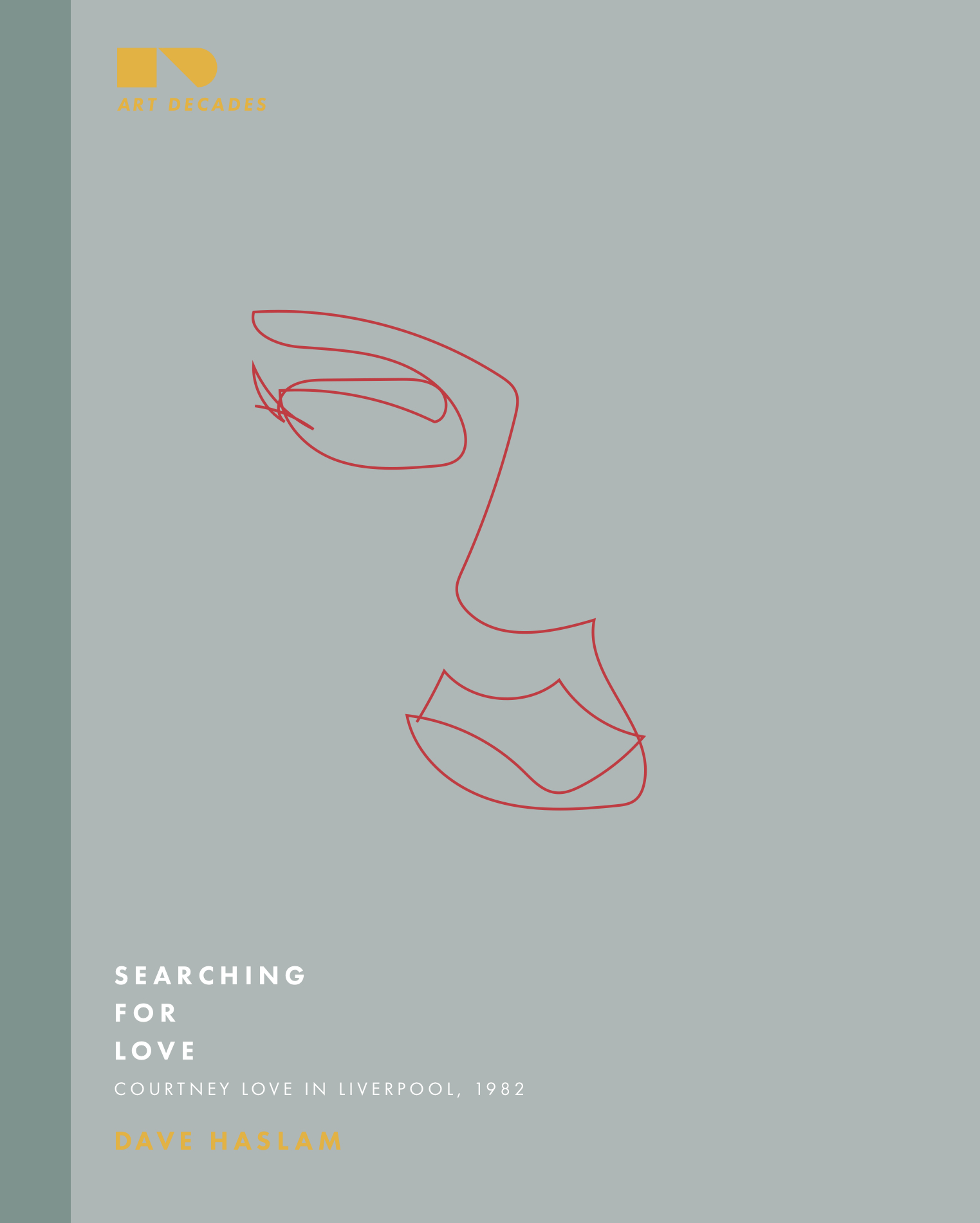 What interested you about the period of her life that Courtney Love she spent in Liverpool?

The formative years of an icon, that fascinates me. Liverpool in 1982 was a very fertile period in the city – the Bunnymen, Teardrop Explodes, Wah! Heat. She immersed herself in all this, aged 17. That world of alternative rock was already something she had an interest in but in Liverpool she got close to it and inspired by it. The collision of those young men in their overcoats with their rock dreams and the crazy, loud, young American seemed like an encounter worth researching.

This book is third in a series of Art Decades – a series of mini books. Why did decide to start writing in this format?

I've written five full-length books – they take me a few years to write. My head is full of book ideas, and I decided the shorter format would be an ideal and quicker way to get these ideas out into the world. 10,000 words is long enough to add depth and details and generally to tell a great story, and for some people it's a more convenient and attractive that they're books you can read in a day. I think of them as singles, rather than albums. But a single like 'Ever Fallen in Love (With Someone You Shouldn't've)' says as much in less than three minutes than some one-hour albums. That's what I aspire to!

Before she went to Liverpool she was in Dublin. How did Courtney Love ended up in Ireland?

Courtney had a chaotic and damaging childhood, which is not something I fully appreciated until I began the research. Hank Harrison her biological father was living in Drogheda and even though her relationship with him was, shall we say, 'problematic', she wanted to get out of Oregon, be someplace new and so she travelled to stay with him.

Whilst in Dublin she had various jobs including making coffee for U2 and working in Hot Press – please elaborate and how much credence should we give these claims?

Courtney isn't necessarily the most the most reliable narrator of her own life story, but she was focussed, perhaps pushy, and seldom left a door unknocked, so she may possibly have got herself some kind of commission from Hot Press although there is no record of it. As for U2, she was in Dublin as the final bits of October were being recorded so she may well have visited the studio. She says she made coffee for the band at the studio but it was a pain in the ass getting there from Drogheda by bus, and back of course; I don't know much about Ireland's bus transportation system in 1981 but I certainly think this detail has the ring of truth!

Courtney Love was invited to Liverpool by Julian Cope, who has since gone on to denounce her and make no secret of his hatred – what’s behind that?

She first met him when the Teardrops played at McGonagle’s in Dublin and then again in London in February. By this time she'd left Dublin and met up with one of her friends from home, Robin, and the two girls were staying in London – and not enjoying it there much –Julian told them if they wanted to go to Liverpool they could stay in a room he'd just vacated in the city. She calls him her 'first crush' and 'almost a guru'. They got on OK, he invited her to gigs: she and Robin would get in the van and go off and see the band perform. Then just over ten years later he takes out an advert in a music paper and called her a "Nancy Spungen-fixated heroin a-hole". She was taken aback and properly hurt. He's never really explained it. Robin reckons it was mostly down to jealousy; Courtney's star was in the ascendancy and Mr Cope's wasn't. It made me admire Courtney more, threatening an old man's rock star ego like that. Priceless.

Pete Burns seems to have been similarly enraged at the time but later gave a more considered opinion that she had ‘fire inside her’. Tell us a bit about his role in the Liverpool scene.

Pete Burns lived in the same house she moved into with Robin. As did the singer from the Wild Swans and the drummer from Echo & the Bunnymen. It was a multi-occupancy rock & roll who's-who there, I think! But Pete also worked at Probe Records, a place that was important to the scene and where Courtney Love liked to hang out. Pete was very sarcastic and gobby and gave everyone stick – but Courtney gave him stick back. Maybe he later realised that this was a mark of her fire!

She seemed to thrive being around musicians. Not in a ‘groupie' sense, but she seemed to get a kind of ‘contact high’.

I think music-obsessed teens love hanging out with rock stars. If you're a guy who goes to soundchecks or gets in the van to gigs or hangs out at a record shop for hours, you're in the gang; if you're a girl, you're suspected of being a 'groupie'. In Courtney's case she had the usual sex drive of anyone her age, but even more importantly, she had a load of shit in her head she wanted to find a way to express – and she was realising rock music was the medium she was going to use.

Courtney Love has said ‘The trip was one of the most important things of my existence’ – why do you think the city impacted on her in such a way?

It was a grounded, DIY scene, very different to stadium rock or whatever she might have experienced back home. Also, it was very literate – the Liverpool lads read books, took stuff seriously. They also had nurtured self-confidence: the Cope walk, and Ian McCulloch all aloof and cool. Creativity and attitude: as one of the people I spoke to says in the book, "We were a bunch of ragamuffins, but we had something she wanted." Being in Liverpool and seeing musicians who were on the cover of music papers one day and walking through Liverpool the next, or just sitting in the Armadillo Tea Rooms, made being in a band and being successful seem achievable.

You are probably best-known for your legendary DJ sets in the Hacienda and your relationship to the club. What was its role in the cultural evolution of Manchester?

There was a lot happening in Manchester in the mid-1980s, New Order were at their peak you might say, and The Smiths too. A lot of good stuff was also happening in the underground clubs, lots of little scenes from jazz-funk to electro and lot of live music. In fact, most interesting things were underground. Status Quo, Dire Straits – they were the popular groups. My little world was considered weird: bands like James, or me playing 23 Skidoo records in tiny clubs on a Thursday night. But we all kept on keeping on, and the Hacienda became our playground and what we were doing eventually clicked with the wider community.

You are also well-known for your various journalistic endeavours which have their roots in your fanzine Debris. One of your early coups was interviewing Morrissey who came around to your house for tea.How would you compare the man then and now?

I've been vocal in my response to some of his rants about race and politics and his support for the far-right English figure Tommy Robinson – and also his criticism of the #metoo movement. He's got into some unforgivable views and to be honest, especially in the UK, it's lost him fans and a lot of respect from his peers. I was and remain a big Smiths fan, and I admired him and liked hanging out with him. He was charming and interesting. I think it all went downhill once he'd moved from Manchester and become a tax exile. Brits abroad – they can be a strange bunch.

In 1987 you reviewed The Stone Roses for NME and two years later the magazine was obsessed with them. You warmed up for The Stone Roses many times, for example in Spike Island. What are your memories of that infamous show?

It's thirty years ago, but I can remember two things, one of which was how Spike Island felt like a gathering of a new generation and an event that would be historic. But I also felt a little detached from it: it had got so big. Over the decades I've realised that I'm most turned on by music when it's new and undefined. All great culture starts at the margins, a few people getting together. The 2nd book in my series was about the artist Keith Haring: the small venues, galleries and other spaces in New York in 1979-85 were incredibly significant in forming his ideas and launching the careers of him and the likes of Jean-Michel Basquiat.

Can you give us any other musical examples?

Fifteen years ago I saw Everything Everything play at a small empty club in Manchester, and five years ago The Orielles at a tiny venue called Aatma; both those bands pull way over a thousand people in Manchester now. I love it when ideas in culture are effervescing, breaking through, and you can feel the hunger and passion of the newness of it; for me, things can become stale once it all becomes defined.

You have organised many shows in your lifetime. One of the biggest was the Anti Clause 28 (banning the ‘intentional promotion’ of homosexuality by a Local Authority) show. Liam and Noel Gallagher claim if they had not attended there would never have been an Oasis. How do you sleep at night Dave?

Ha! This was 1988, an event protesting the Tory's homophobic legislation about what could and couldn't be taught in schools. The band James played and The Stone Roses supported. Liam found it all intoxicating and you can tell that Ian Brown is an influence. I like that Oasis, loved by loads of lads, had their genesis at a concert staged to show solidarity with our queer brothers and sisters.

Finally, did researching the current book change your view of Courtney Love?

I started by being interested in Courtney Love and I ended by being inspired. She's flawed, like we all are, but she's come through so much and done so much. The next book in the series is about Sylvia Plath - specifically in the months before she met and married Ted Hughes. I'm realising there are several parallels between Courtney Love and Sylvia Plath. How do we articulate the chaos in our heads? They both did it so well, with such power. 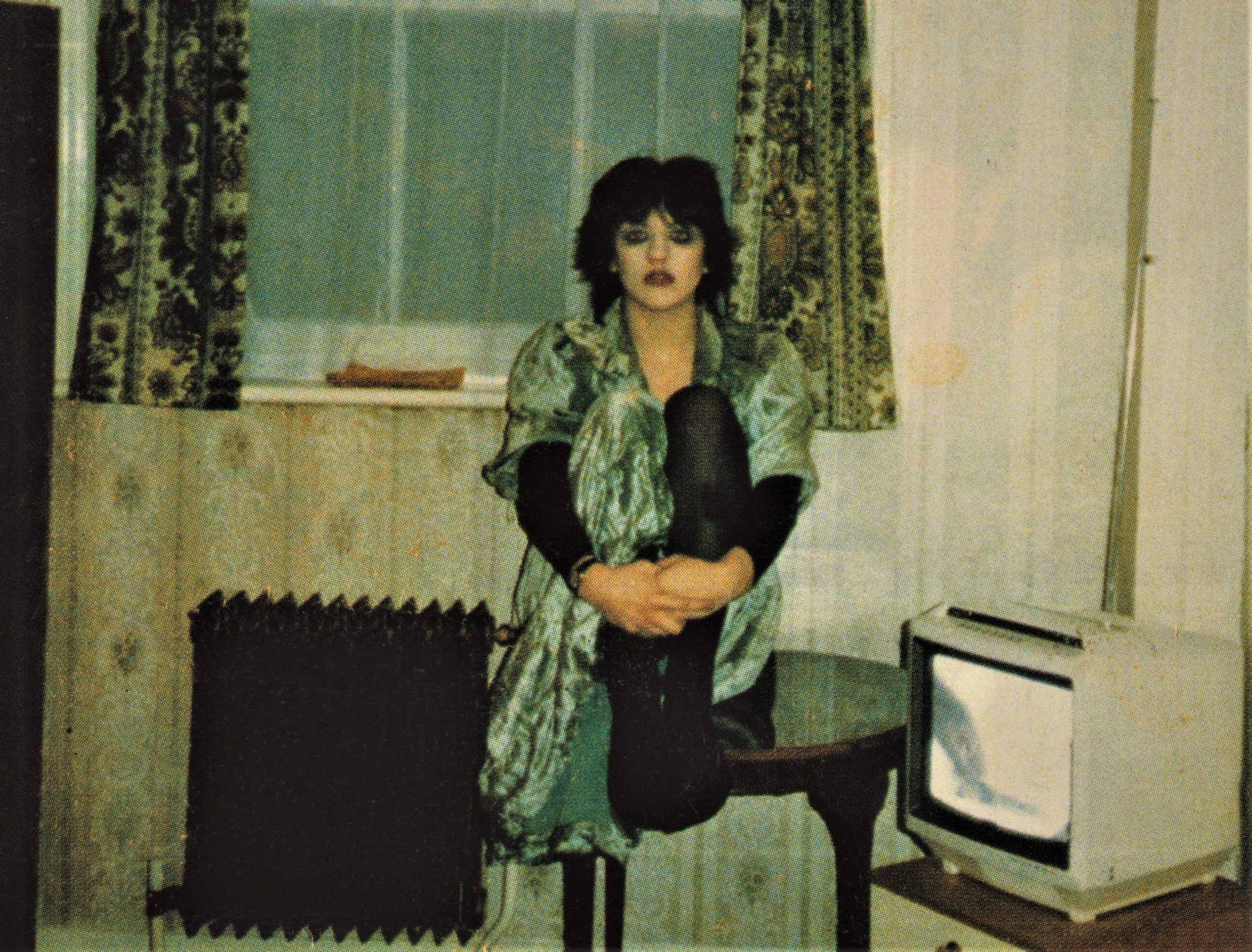 MORE about Searching For Love; Courtney Love in Liverpool, 1982 here.

Main photo by Mark Edwardson: Dave Haslam, in front of the house Courtney and her friend Robin moved into. Also occupied by Pete Burns, Paul Simpson of the Wild Swans and Pete de Freitas of Echo & the Bunnymen.