The demands of the Climate Strikers
Speaker at the Student Strike for Climate Change
Indie Caldwell / Hot Press
By: Selina Juengling

"Make the changes that will give us back our future!"

20,000-30,000 people took to the streets today to strike for climate change, specifically appealing to politicians and the government to take action. The march came to a close at Merrion Square where a stage was put up in front of the Department of Taoiseach.

There, the leaders of the climate strike in Dublin – mostly students – took to the stage, delivering one powerful speech after another. The message they want to spread is the same: the climate crisis is real and has to be stopped as soon as possible.

"We never should have had to do this. Children shouldn't have to miss school and worrying about having a planet in the future", student Beth says, almost shouting, in her speech, "but we have to because those in power won't wake up."

Another girl, called Molly, directly addressed the ones in power. "To our government: you have caused me and thousands others to give up our teenage years 'cause you couldn't do your job correctly. We need radical action, not just paper straws. Laws need to be put in place. There should be no such thing as a huge climate activist. Dear government, this is what you've driven us to. Start changing!" She says this with such enthusiasm and conviction that her voice cracks multiple times during her speech, underlining the urgency and importance of her message.

At one point during the rally, the speakers asked all the climate strikers to set their alarms on their mobile phones to go off at 11 minutes to 2, "cause we have 11 years to stop this". At 1:49 everyone went silent for a minute. It was truly chilling to hear the different ringtones chime, symbolising that something has to change – we have to change – right now. Building on that metaphor, the leaders of the climate strike smashed a clock with a hammer. Tick tock, time is running out. 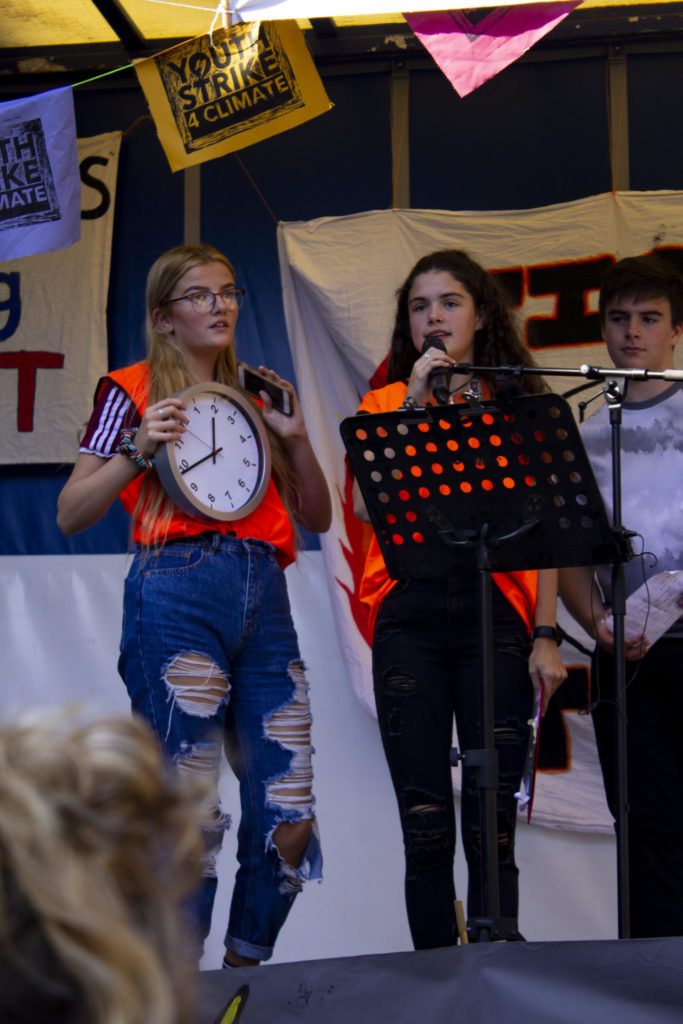 Speaker at the Student Strike for Climate Change

There were loads of emotional speeches today. College student Lucy Holmes, for example, was close to tears during her delivery of the poem that she wrote. And primary school student Theo Colin Moose even admits, "Just before I stepped onto this stage, I felt like crying. Not out of sadness but out of pride."

They can indeed be proud of today as it will likely be the largest global climate strike in history. Let's just hope that it woke up our leaders to take action and to stop climate change once and for all. As 10-year-old Ruby demands in her speech: "Make the changes that will give us back our future!"

Frontlines: What are they doing to our trees?
'We're On The Edge Of A Precipice' - President Michael D Higgins talks climate change, Greta Thunberg and more
Irish talents to come together for 'One Trillion Trees'
Earth Calling: Faces of the Dublin Climate Strike
20,000-30,000 people estimated to be in attendance at the Dublin Climate Strike
Climate Strike: Why Students Are Striking Today
We use cookies to ensure you get the best experience on our web site - by using this web site you consent to our use of cookies. Read more »