Bono's memoir is set to be published in November.

The 2022 Literature Festival in Cheltenham is a 10 day event that runs from the 7th-16th of October. The line up for events has just been released, including a discussion with U2's frontman, Bono, about his new memoir.

Bono's book Surrender comes out this November. Published by Penguin Random House, their descriptor for the book reads as such: "As one of the music world’s most iconic artists and the cofounder of the organisations ONE and (RED), Bono’s career has been written about extensively. But in Surrender, it’s Bono who picks up the pen, writing for the first time about his remarkable life and those he has shared it with. In his unique voice, Bono takes us from his early days growing up in Dublin, including the sudden loss of his mother when he was fourteen, to U2’s unlikely journey to become one of the world’s most influential rock bands, to his more than twenty years of activism dedicated to the fight against AIDS and extreme poverty. Writing with candour, self-reflection, and humour, Bono opens the aperture on his life—and the family, friends, and faith that have sustained, challenged, and shaped him.

"Surrender’s subtitle, 40 Songs, One Story, is a nod to the book’s forty chapters, which are each named after a U2 song. Bono has also created forty original drawings for Surrender, which appear throughout the book." 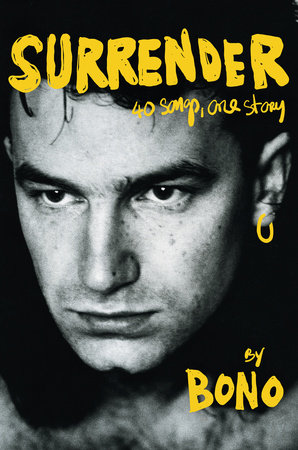 In addition to this star-power, the festival promises events and talks from the likes of Stanley Tucci, Stephen King, Charlie Mackesy, Natalie Haynes, and Taylor Jenkins Reid. The festival also boasts countless offerings across the worlds of art, literature, music, science, and social activism.

There's a mixture of ticketed events, free family activities, and fringe events scattered throughout the town. Head to their website to view the full list of participants and for information on booking tickets.

From 7 to 16 October, we'll be taking over the town for #CheltLitFest

Check out our brochure: https://t.co/Sl7Ve5VqjS

And keep your eyes peeled at 10am when you can head to our website and start creating your wishlist pic.twitter.com/AKZNHSEBWl

Dermot Kennedy: "I know who I am, and who I want to be... I felt less pressure, as a person, for this one"
Glen Hansard and Rónán Ó Snodaigh on The Busk: "We’re a tiny island with about five million people. We should really look after each other a bit better"
In the new issue: Dermot Kennedy stars on the cover of our special festive edition
Shane MacGowan launches new book The Eternal Buzz & The Crock of Gold
In the new issue: Bono graces the cover in a classic shot from the Hot Press archives
The Coronas' Danny O'Reilly: "I'm proud of our longevity and the fact that we still love it... We're blessed"