“A lot of my story is about not understanding my place in hip-hop": Tebi Rex tackle the themes behind It’s Gonna Be Okay
Tebi Rex. September 2021. Copyright Miguel Ruiz.

Having established themselves as one of the country’s most exciting young acts, hip-hop heroes Tebi Rex are back with the abrasive, rock-influenced It’s Gonna Be Okay. “This album is more purposely chaotic,” they tell Kate Brayden. Photography: Miguel Ruiz

Nestled in DCU’s Student Union building, Maynooth alternative hip-hop duo Tebi Rex are preparing to hit the Lawn Tent stage for 100 eager college kids. Matt O’Baoill, though, can’t seem to find a Very Important Hard Drive full of beats for their sophomore album, It’s Gonna Be Okay. Calls are being made to retrieve it.

Matt and Max Zanga are pretty chilled out, considering they urgently need the hard-drive for the show.

“Tebi Rex really needs to get organised, which is a different kind of battle,” Max admits. Part of their charm is their ability to navigate the music business with a quickfire sense of humour, but they always retain creative control.

“Sometimes we don’t even know what’s going on, to be honest. Our manager gives us freedom,” Matt grins. “We did some remastering work for the ‘Deadman’ music video, and suddenly I’m in bed with Max’s housemate Raff filming a gay sex scene.”

“Did that go well?” Max queries.

Twenty-seven year-old Matt currently works as customer success manager at a tech company, which is somewhat left-field, given the nature of his passion project. Max, meanwhile, has finished a Masters in Media, after attending Maynooth University for his undergrad. (“I’m a full-time musician-slash-writer-slash-creative, which means I do anything for money.”)

Tebi Rex was formed back in the duo’s college days.

“It was actually music first, before friendship,” Matt reminiscences. “There were some funny, brief interactions in clubs and bars, before I figured out that I wanted to make hip-hop. I knew he was really good at it, but I wasn’t so sure about myself.  I don’t know what Max made of me at the start, though.”

“I first met Matt when he was campaigning to be Student Union President for Maynooth,” Max takes up. “We had a mutual friend, so I just agreed to wear the t-shirt for him. We were in completely different spaces in life at the time. He seemed nice but unsure about the whole rapper thing, and just wanted to have fun. That was the main vibe of our first conversation. I really wanted to pursue music and make a go of it.”

“It was probably like six to 12 months before I realised that I did too,” Matt adds. “We were releasing an EP, and a couple of hundred people at one of our gigs were singing back the lyrics to us. I was like, ‘This is it, fuck everything else.’”

Two years have passed since Tebi Rex unveiled their debut album, The Young Will Eat The Old. Sophomore offering It’s Gonna Be Okay takes a sharp left turn into rock territory, with wonderfully frenetic results. The pair are quick to credit those who support them.

“I have one or two friends who are really supportive,” says Matt, “and more who jumped along as it started to make more sense to them. My parents have always been pretty understanding.”

“My parents are purely practical people,” adds Max. “So if it makes money, they do not care. When your parents see you on TV or hear you on the radio, it’s easier to sell it. I got a full education, so they’re cool with my decisions. My dad really wants me to make Afrobeats. He’s like, ‘There’s such a market in Nigeria’. It would take months to learn that. We embedded rock into this album – it took ages. When you’re young, your parents assume you’re just fucking around and you’ll stop eventually.”

“It took us a couple years to break properly,” Matt observes. “We were a slow burn. Some people pop straight away and do really well.”

“It doesn’t have to take so long,” jokes Max, “we just weren’t very good.” 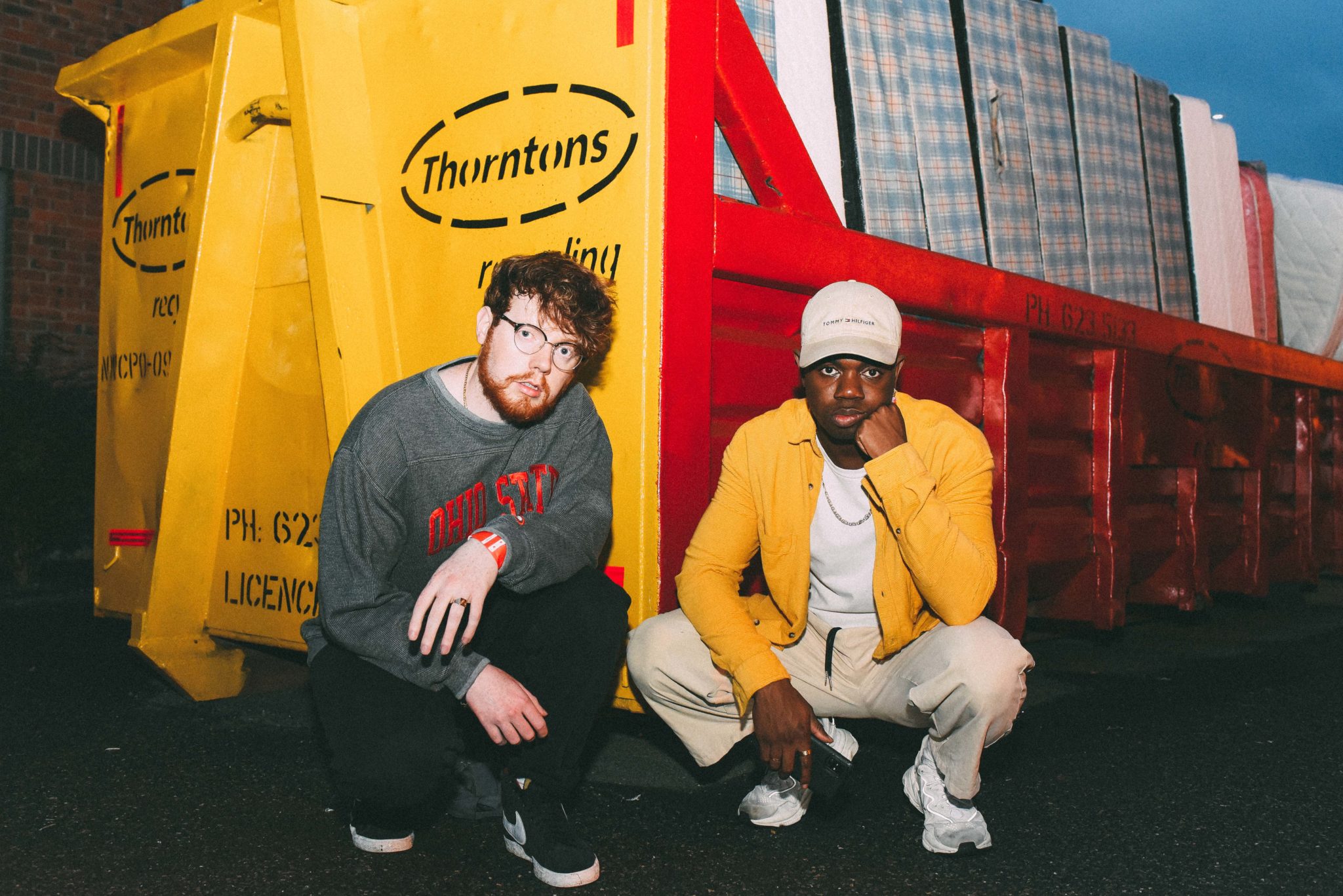 Delving deeper in the rockier textures of It’s Gonna Be Okay, which has echoes of Idles, Shame and Girl Band. Max breaks down its aesthetic influences.

“Irish hip-hop does this thing where it can be jovial and funny,” he considers. “It also does sadness really well. Artists like Malaki perfectly encapsulate that melancholy. It’s harder to do that when you want to work with anger and rage. You see it in the US in terms of gangsta rap, or grime in the UK, but music in this country is so rock-heavy.

“When we did the first album, we wanted to show that Tebi Rex can make a clean, professional album. This album is more purposely chaotic. I wanted that noise-rock messiness to tell a story, because our headspace is all over the place.”

Teaser singles ‘Deadman II’, ‘Hanging With Trees’ (featuring Derry act ROE) and ‘Deadman’ explore themes as wide-ranging as mental health, capitalism, death, racism and the decline of Irish culture. Young people are speaking out about the burdens weighing down their generation, and this album has the powerful feel of truth.

“From a storytelling perspective, says Matt, “Tyler the Creator is a good example of someone who inspired us.”

Indeed, wit and meme culture are at the heart of Tebi Rex.

“I remember when I heard IGOR for the first time,” Matt recalls. “It’s one of my top 10 albums ever. You start to learn that making the sound shitty was his decision. It’s all about his characters and their distorted points of view.”

“I try very hard not to focus too much on someone else’s sound, in case I end up drowning in the influence,” Matt adds. “Particularly within the hip-hop realm, I sound different than the norm. Other Irish artists get me going creatively, but Max dreamed up the concept for this album.”

“Matt indulges my ideas,” Max concedes. “I was at a party and someone told me how much they enjoyed ‘Men Are Trash’. He’s like, ‘I really love what you say and what you stand for’, all that type of shit. It felt so wrong, because that song is about being honest in terms of what we lack. We got put into the male feminist rapper bracket. That’s not a bad thing, but it’s something I was not deserving of. I just suddenly felt really fake. I walked through a forest and had a panic attack before I came through this tiny clearing. That’s where the idea of a talking tree came from.”

As Matt highlights, there is a narrative of sorts running through the LP.

“That spiritual force isn’t telling you everything is great and it’ll all end up fine in the end,” he asserts. “We didn’t want to make an album about that from the jump, it had to have an arc. ‘It’s going to be okay’ is the kind of thing you say when a plane is about to crash and you don’t really believe it. The album has that hollow feeling at the beginning, but gradually it becomes more comforting by the end.”

“I had a fucking mad year,” Max adds. “My brother got diagnosed with cancer, which I talk about on the album. I’m also just messed up by imposter syndrome. It was cool dwelling in these bad feelings while trying to be optimistic.”

How does Max cope with such intense anxiety?

“I think it’s purely about the outside perception of me,” he replies. “I had such an issue with that when we started doing well and people were treating me better. I don’t think I could ever handle actually being famous. That small amount of attention I got on my college campus made me a dickhead for six months. I’m not proud of that, but clout is a hell of a drug. Weirdly, I don’t get anxiety on stage. Performing is the best part of this whole thing. Then you go on Twitter after and it’s like, ‘Oh, everyone hates me.’”

“I loved social media when we were first starting, but now I’ve seen this other side,” Matt observes. “We did a song with The Blizzards and Bressie was like, ‘Don’t look at Twitter mentions.’ We went, ‘What a weird thing to say right before we go on stage’. That was nerve-wracking, but he was right. There was nasty shit up there. The worst thing is if someone says something that’s true. Say anything about the music, that’s fine. But about us as people? That’s the hardest stuff.” 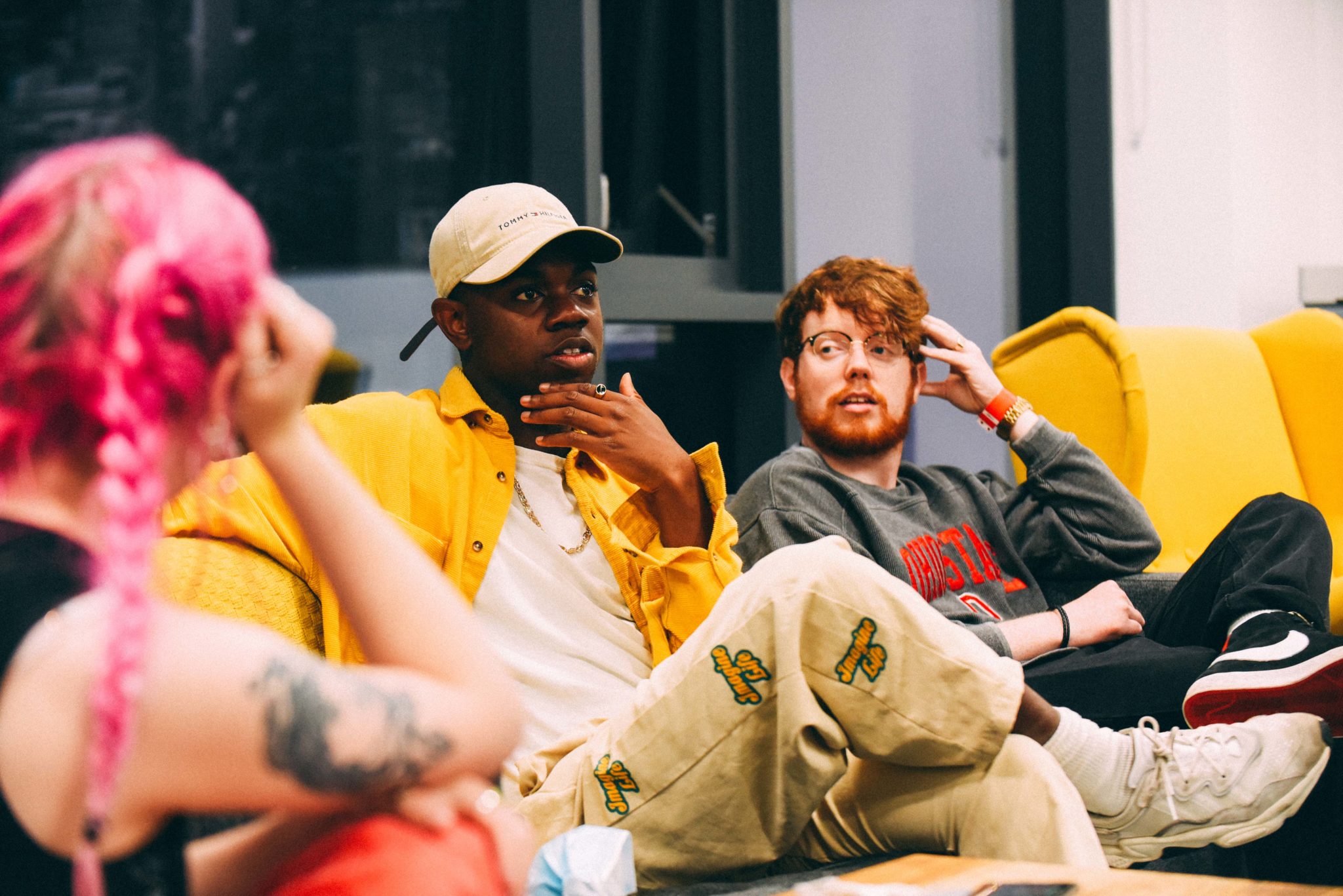 Max chimes in on the record’s emotional rawness.

“I didn’t really want to make It’s Gonna Be Okay a mental health album,” he says. “A lot of it is about suicidal thoughts and ideations. It’s not about trying to fix it, because I can’t. It goes from a sense of hopelessness, to a point where I’m going to just try. A lot of my story is about not understanding my place in hip-hop.”

“The album for me was about having the most honest reflection of myself I could,” Matt posits. “I put the line ‘26 with a shrink on speed dial’ in, because I just started seeing a therapist. I started the process after years of shrugging it off. The cost of mental health just seemed too high before. I didn’t tell all my friends about it, but then I realised that 99% of them had quietly all gone to therapy.”

As the pair continue to chat, the bond between them is palpable.

“I honestly wouldn’t have a music career if we had a fight and split,” Matt says, glancing at his musical partner. “I’ve done solo music and I don’t get the same buzz from it. When you’re in a duo and things go wrong, we’re in it together. We can also celebrate together when things go well. I would support his career rather than mine.”

“I’d be fucking huge without Matt, I’d be a fucking star,” Max jokes. “No, I don’t see us having a massive argument, because we know we don’t want to do music forever. We’re going to take a break from new music after this release and just tour Europe. Then we might mix an EP and maybe a final album, but when we dissolve, it’ll be because we both feel it’s the right time. It would be far less fun on my own. Solo stuff is so boring. You’re not having a back and forth when you’re on stage by yourself. It seems like a bummer. I would be too insular. He reels me in, you know?”

“If we got famous, I’d quit my job to be a full-time artist for as long as possible,” says  Matt. “I can’t tell my kids to follow their dreams if I don’t do it myself.”

“He’s talking about his future children,” deadpans Max. “He doesn’t currently have kids.”

• It’s Gonna Be Okay is out now on Republic Of Music. Tebi Rex play the Opium Rooms, Dublin on November 20.

Mental Health Special - Pádraig Jack: "After my first panic attack, I went to a counsellor straight away and talked to friends and family"
Mental Health Podcasts: Here's Five To Check Out
Megan Thee Stallion launches mental health website for fans

Student Mental Health - Clodagh Ní Ghallachóir: "We’re very much about meeting the individual as they are, and then tailoring the service to meet their needs"
Florence + the Machine unveil video for 'Free' starring Bill Nighy as "anxiety"
Live Report: Tara Nome Doyle on the Hot Press Y&E Series
Tara Nome Doyle: "I hope the album's lyrics inspire people to think about their own shadow, or the things they find unacceptable about themselves"
"The low mood of artists is the dominant issue right now but stress, anxiety and career problems are also up there": Minding Creative Minds' Dave Reid
Colm Mac Con Iomaire, Robert Grace, Willzee & more to play Mental Health Arts & Culture Festival 2022