In Rod We Trust

I was asked on the wireless recently what live act I'd love to see that I hadn’t already. I mumbled some vague answer about Elvis but I really should have mentioned Sir Roderick David Stewart. The records he made after his big break with The Jeff Beck group – from 1969’s An Old Raincoat Won’t Ever Let You Down to 74’s Smiler are masterpieces that combine very good time rock n’ roll with warm readings of songs by everyone from Elton John to Ewan MacColl. Not only that, but he managed to chip in with The Faces at the same time, the absolute kings of the boozy bonhomie boogie. Many might claim that he went off the boil after he moved to America for a life of champers and a conveyor belt of leggy blondes, but why the hell would one want to be a rock n’ roll star in the first place if you couldn’t get involved in that kind of messing? And anyway, he was still knocking out singles like ‘Hot Legs’, and if you can’t take any joy from that, you should check your pulse. Most importantly of all he did everything with a massive grin on his mug. Bowie might have been from outer space, Jagger may have reeked of dangerous decadence but Rod looked like he was having more sport than anyone else on the planet – read his book if you haven’t already, you’ll laugh yourself in half - and that is reason enough alone to love him.

I was excited so, and I wasn’t on my own. The 3Arena was packed with eager, smiling faces, a few Celtic jerseys, scarfs, bits of cheap neon – you get the idea, for a lot of people here the party had started well before Rod took the stage to a roar and launched into the old Persuaders number ‘Some Guys Have All The Luck’. Let us examine the evidence – the set looks like it was transported, bulb by bulb, from Vegas, I count six – six! – fabulous looking women in outfits that could only be described as “snug” (FYI: I’m quite probably going to refer back to these women a few times, if that sort of thing troubles you, then I suggest you leave now, this review won’t be for you), the band are all grinning and moving about, and Rod himself looks fantastic. He’s in pinstripes and polka dots, with some sort of snakeskin shoes on (“Why does one of them have a red light in the heel?” Ms Coyle asks, sat beside me. “In case he needs to make a right turn?” I posit), he’s making faces, he’s wiggling his arse, and his voice – one of the very greatest in rock n’ roll – is more than up to the job. If you’re still not convinced there’s a Celtic logo on the bass drum and a big wailing Eighties sax solo. During ‘Having A Party’ the ladies are doing a variation on the can can which certainly succeeds in distracting me from what is hardly the greatest song of all time, but everyone’s already singing along, so what harm?

“Good evening friends, we had a sensational night last night, so let’s beat that!” he bellows before ‘It Takes Two’ and then “What a marvellous start to the evening, I did a lot of fucking talking last night, I’m not doing that tonight, this is for all the servicemen, thank you gentlemen” An accordion leads us into ‘Rhythm Of My Heart’, Rod puts his fist in the air, sticks out his gut and does a walkabout with the mic stand in his hand, a move he pretty much invented so that the Steven Tylers and Chris Robinsons of the world would have something to do. The women are now marching together, looking like the kind of pinups you used to see painted on the fuselage of fighter planes, and the song ends with a sample from the Churchill “fight them on the beaches” speech. Again, it’s not Rod’s greatest song, but they’ve certainly put a few bob into the production.

“One we didn’t do last night” into ‘It’s A Heartache’, the old Bonnie Tyler chestnut that could have been written with Stewart’s sand paper and honey pipes in mind. Never mind all the screens, this is what we want and the whole place joins him for the chorus, and what’s better than one fiddle solo? That’s right, two of them. The women in the band are not just eye candy for the hopelessly unreconstructed dinosaurs amongst us, they’re gifted musicians and singers too. I’m not sure what’s going on in ‘Forever Young’ though. Rod wanders off in the middle to make room for some sort of quasi- Riverdance bollocks, tap dancing, banjos, a Lambeg drum, and women spinning around like a Bord Failte ad. Things start to make more sense when he returns and starts slapping his own arse like he’s riding an imaginary horse. Anyway,  that's out of their system and we finally get down to the classics. Stewart has always been an underrated song writer and ‘The Killing Of Georgie’ is a diamond, and ballsy subject matter for a jack the lad back in 1976. It’s delivered in front of Broadway signs and helped along by backing vocals and three sets of shakers, although that glorious coda is cut too short. 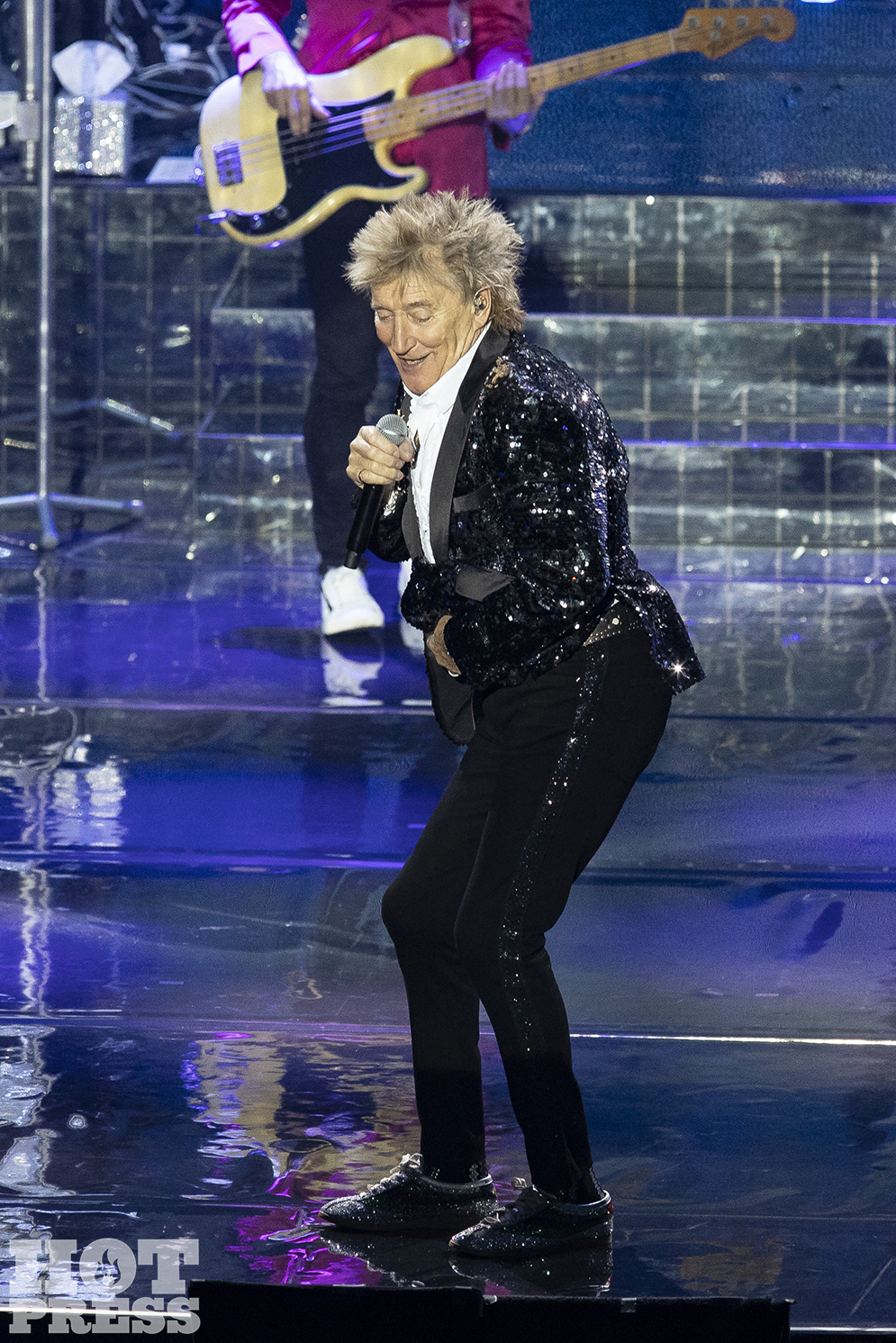 “I recorded this with my old mate Ronnie Wood, only two takes but two bottles of wine” The heavily Hammond-ed ‘I’d Rather Go Blind’ is a surprise and a delight. Two spotlights pick out Rod and if anyone was worried about the voice, his singing of the “I was Just, I was Just” section shows them the door. The sax player – he must be getting paid by the note – comes back in after a very fine approximation of Wood’s guitar style  but he fits in well this time. “All right, let’s get rocking!” ‘Young Turks’ has most of us, your correspondent included, up out of our seats, arms in the air, roaring along, and not just to Rod’s lyrics either, we’re all giving it out to the keyboard riff coming from the man behind the sparkly Johanna too. I didn’t notice but another drummer has turned up and Rod slips off again so we get a percussion solo which is too long to be ignored but not long enough to sneak out to the jacks and back. Good thing too as I would have missed ‘Tonight’s The Night’ complete with a porn sax solo – Rod is getting his money’s worth out of this lad. ‘You know what they say,” says Ms Coyle, “where there’s brass, there’s…” “Muck?” “Class, Pat. Class.”

Rod causes a bit of concern when he brings up the new album and opens the immortal ‘Maggie May’ with a dodgy orchestral arrangement but once it kicks into proper gear, everyone’s up waving scarfs and miming stealing their Daddy’s cue and making a living out of playing pool. “You must have heard of Tom Waits, He was happy I recorded this, it put a roof on his house” he says by way of introduction to a great ‘Downtown Train’ complete with footage of Rod’s model railway set up. There’s an instrumental interlude while clothes are changed, and the sax man cometh, again, but at least it’s mercifully short.

He’s back, in a spiffing blue, spangly jacket – “wrong colour for a Celtic supporter!” - for an acoustic-y set that kicks off with ‘Dirty Old Town’ and then it’s lump-in-my-throat time for ‘The First Cut Is The Deepest’ and ‘I Don’t Want To Talk About It’ and the gigantic chorus of ‘You’re In My Heart’ - not to mind “the big bosomed lady with the Dutch accent” - was worth leaving the house for on its own. Singing ‘Grace’ in Dublin is like shooting fish in a barrel with an M16 but Rod takes this song that we’ve all heard at a million closing times and gives it life, his is a voice that could sing you a terminal diagnosis and you’d still be waving and warbling along. The set finishes with Van Morrison’s ‘Have I Told You Lately’ and there’s something in my eye.

The lads in the band all get a solo before the women, now in eye-popping leopard skin, go through Donna Summer’s ‘She Works Hard For The Money’ and the world and its Ma uses this as an excuse to visit the facilities. Rod now has his own leopard skin jacket and spats which bode well for the time we have left, and here we go. I’d love to tell you all the details that followed, about how Rod played the greatest single of all time – ‘Da Ya Think I’m Sexy?” – followed by the second greatest single of all time – ‘Baby Jane’ complete with TOTP graphics and sax solos, and then went into The Faces’ ‘Stay With Me’ - “With a face like that you’ve got nothing to laugh about” – complete with slide guitar and false stops. Yes, I’d love to tell you all about it, but I spent that time throwing shapes, shouting, hugging strangers, “singing” and “dancing”. A good half of it was spent faced in the other direction, wiggling my arse like the hero on the stage. I was cutting the rug out in the aisle until staff “persuaded” me back to my seat and Ms Coyle evil-eyed the two people next to her until they left so she could have more boogie room. Never mind all that end of year lists stuff that you're supposed to like, this section on its own was the best gig I’ve been at in a long time.

Curfew is approaching so Rod and gang are back out for a quick go at ‘Sailing’ - although we can’t hear him because the thousands here have taken over and even the ‘Hotel California’ styled guitar solo can’t ruin it – and then he waves us home. Outside it’s cold, misty, and it's raining, but no one's complaining. Rod Stewart is the greatest. Never A Dull Moment.

Live Review: Anne-Marie at 3Arena
Live Report: Neil Diamond Brings 50th Anniversary Tour To Dublin
Live Review: ZZ Top give all their loving at the 3Arena
Wild Youth's David Whelan: "We want to be the first band to represent Ireland in the Eurovision"
The Wombats' Dan Haggis: "The pandemic was a great time to be on a journey of self-love and acceptance"
Longitude's Rising Stars: Pa Salieu, ENNY, Knucks and more