Live Report: Cavetown lights up The Academy in sold out show
Cavetown @ Academy 02/20/20

Cavetown transports us all from the packed Academy arena to the floor of our best friends bedroom, and it’s brilliant.

This is the first of two sold out Academy shows for Cavetown — a testament to the affect of the singer/songwriter’s indie-rock/bedroom pop draw. The 21 year old is known for breaking barriers between artist and listener, and his live shows are no different.

Following the launch his Youtube channel in 2014, Cavetown has amassed a growing, devoted following. There’s an enchanting ambiance to the audience, like that of a group of old friends, with glitter on cheeks and flowers ribboned through hair.

Clad in some of the coolest socks I’ve seen, Cavetown and his band enter onto the plush, carpeted stage which is lined with dimmed living room lamps. There’s a corner of cushy chairs, and a table holding a vintage tv flickering in hazy static. 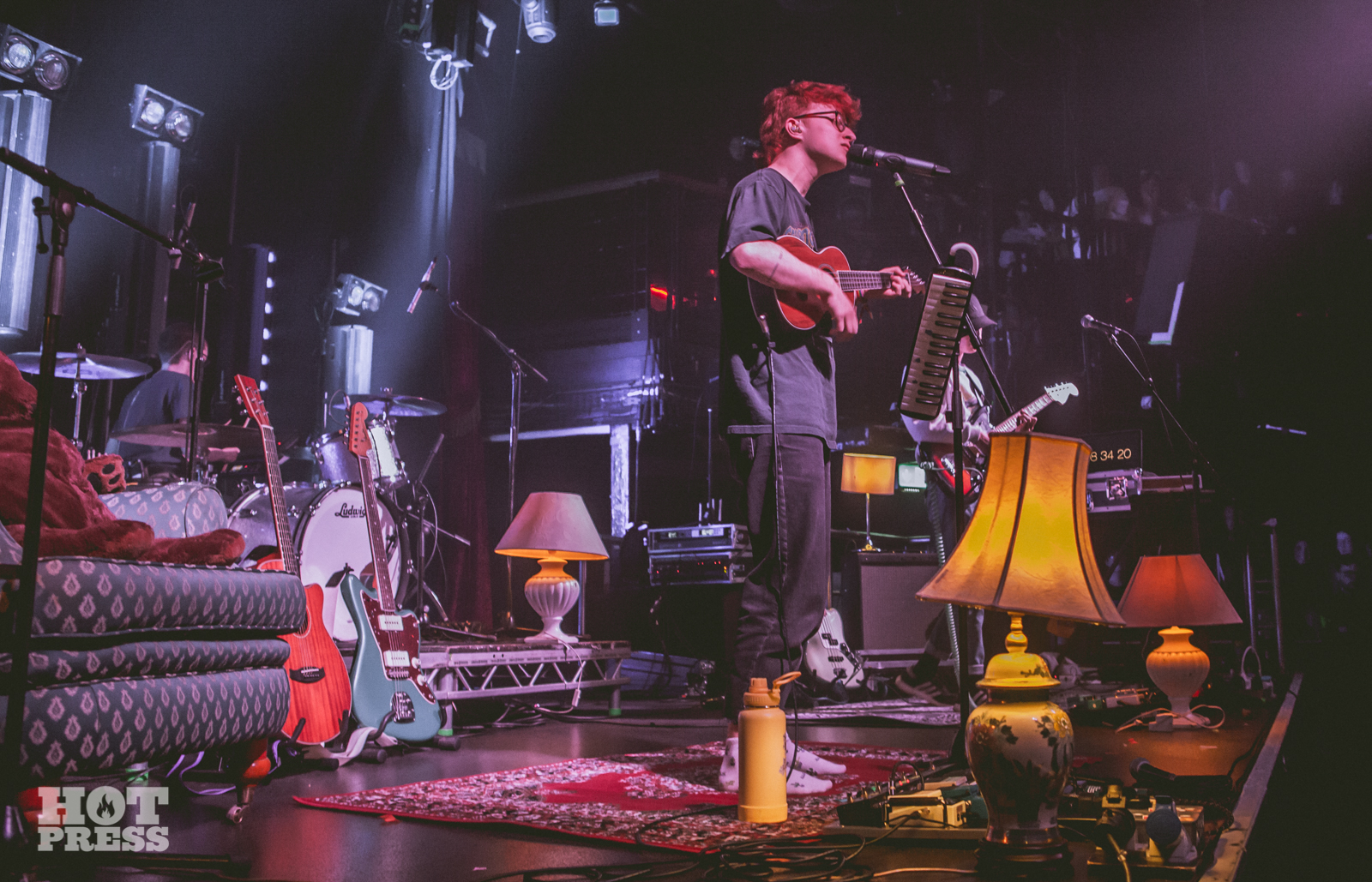 It’s "bedroom pop" on a whole new level. The intimacy is near palpable as Cavetown jumps in with newly released track prior to his upcoming album ‘Sweet Tooth’.

“It’s my first time playing it live…which also means I’m nervous about it!” he laughs sheepishly before soaring effortlessly into the darkly groovy indie anthem.

Moments like this are typical for Cavetown, who possesses a power to make the wide stage he occupies and hundreds of dimly lit audience faces feel practically inches from one another. He banters softly about his haircut, and lets the audience teach him a word in Irish.

Following a rendition of one of Cavetown’s most popular tracks ‘Lemon Boy’, a fan reaches from the tangles of a packed front row and hands him a lemon, which he leans off the stage to accept, appearing tickled. It’s a miraculous intimacy, like we really are all together in a bedroom, as he talks to us about life and growing up.

The tracks may be bops, but their lyrics are dripping in sentiment. ‘Devil Town’ — as I’m informed by a girl behind me — is about Cavetown’s parents’ divorce, with the lyrics blending elements of heartbreak and wit. A bedroom pop/indie musician’s concert may not seem the place for a mosh pit, but this audience was sure up for anything. Bathed in scarlet light, mini mosh broke out to the song's chorus, “Devil town is cold in summer time / I’ll settle for two birthdays.” 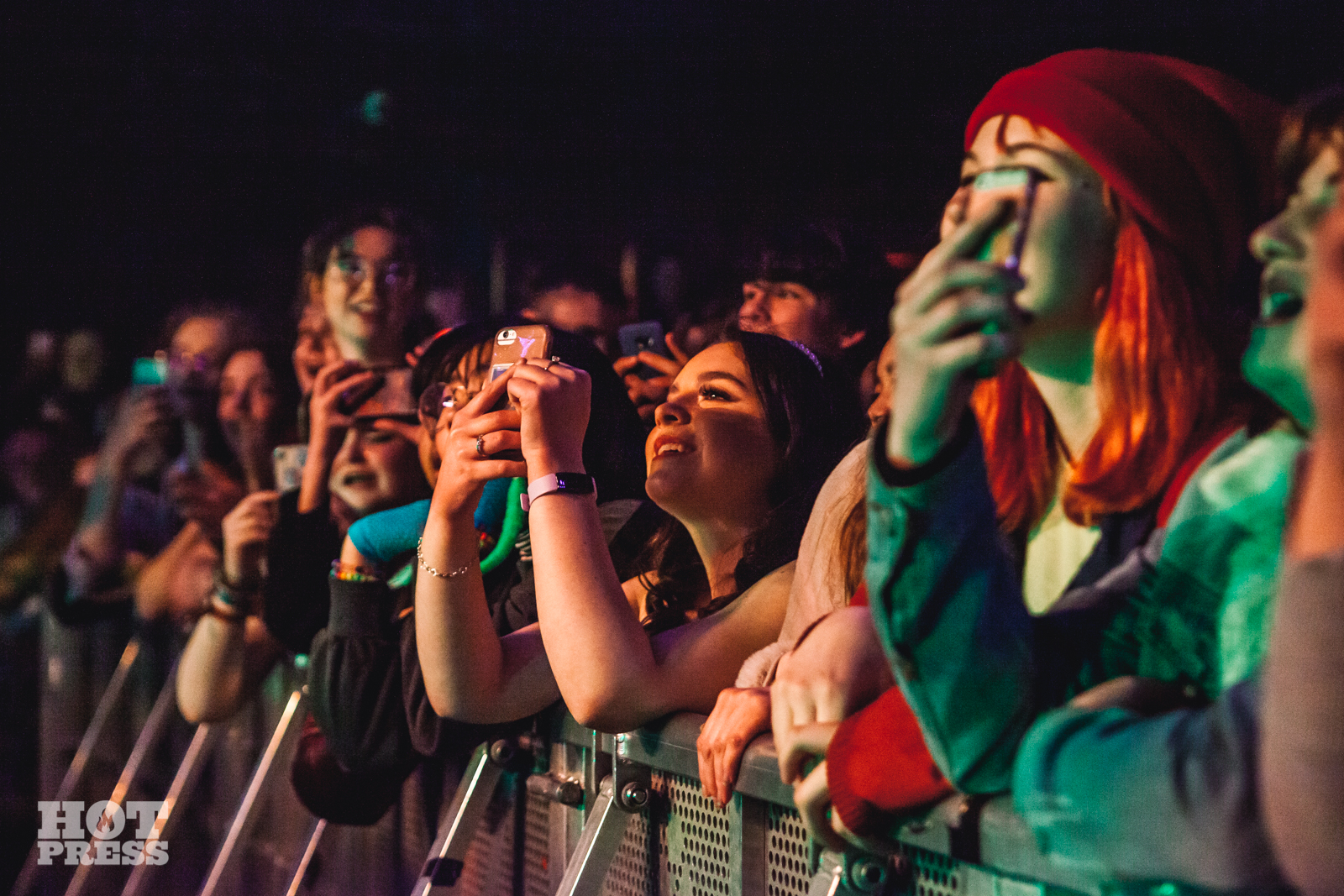 Cavetown dances outside and in-between more emotions and genres than I can count — bedroom pop, indie rock, lo-fi ballads and more. It’s an experience exuding vibrancy.

Bright strings mingle with shimmering metallic synths at one point -- a combination creating an ambiance that’s alarmingly sweet and whimsical, almost like floating through outer space, and therefore rather fitting for the song fittingly titled ‘Telescope’. Suddenly, there’s a the clunky, vintage microphone tons of ‘Taking Care of Things’, and then back to his bedroom pop roots with fan favorite ‘This is Home’.

Come the end of the night, Cavetown is wrapped in a pride flag and crowned in a ring of blue faux flowers. Encouraging us all the dance along with him, he closes us out with ear-worm ‘Boys Will be Bugs’, one of the singer’s more indie-rock anthems, but encompassing so much more than merely teen angst. Cementing his reputation for connecting musician and listener, this song is purely human and perfectly relatable. A brilliant end to a magic night that felt ripped straight from notebook pages on bedroom floors.