On Saturday, Brave Giant took the stage at a sold out Olympia Theatre - and proved to everyone that they belong there.

"At the Olympia, everyone's right close to you. You can really feel the energy of the crowd. It's the biggest, yet most intimate venue you can get in Ireland", Brave Giant told Hot Press' Brenna Ransden back in October. They are right, the Olympia Theatre always makes for a very special atmosphere, especially when the music is as energetic as Brave Giant's.

The indie-folk maestros have come a long way since their ballad-y beginnings. Their new album White, Pink + Blue is full of rockin' bangers which allow them "to go apeshit" as they call it. Drummer Emmett Collum in particular seems to enjoy heavier tunes like 'Lake Of Anna' or 'Otherside', hitting those drums as if he was in a punk band.

Frankly, their music sounds a lot darker and less Mumford and Sons-y in a live context. Not that there is anything wrong with Mumford and Sons, but performing their songs live allows Brave Giant to give their banjo/mandolin-based music a whole new identity. Played with distorted guitars, songs like 'Waves' create an incredible and explosive energy that instantly infects the audience.

Adding to that, their light show was crazy! White, pink and blue lights – naturally – as well as strobe lights were flashing during the more upbeat songs. At times distracting, they nevertheless further enhanced the energetic atmosphere. 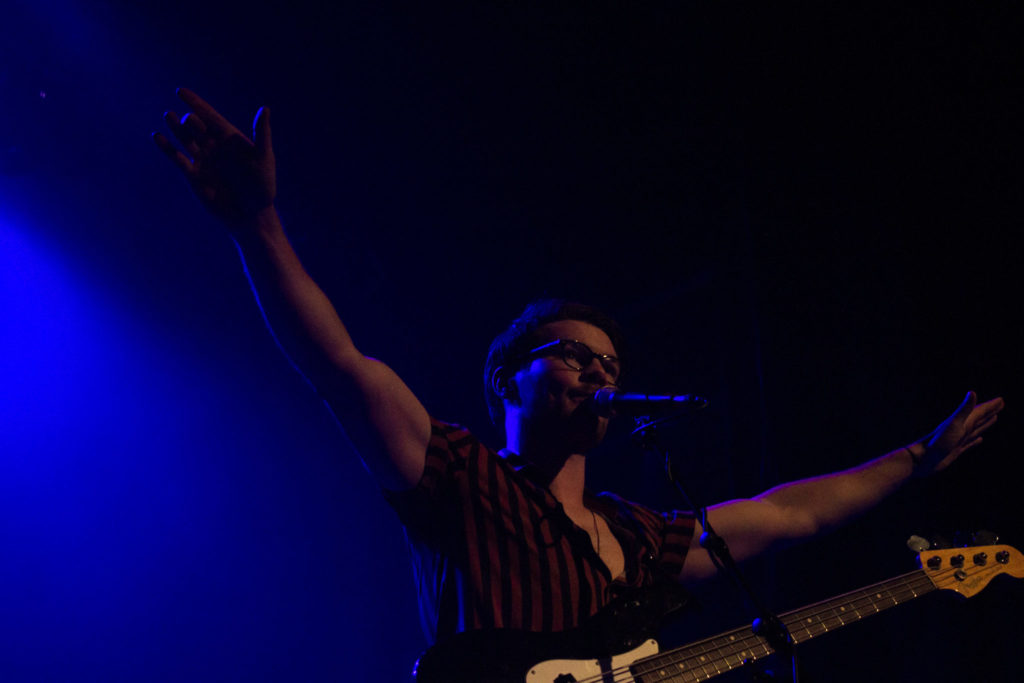 Brave Giant at The Olympia

But of course, Brave Giant wouldn't be Brave Giant without their folk-ballads. Particularly moving were renditions of 'Hand Me Downs' and 'My Last Cigarette'. Honestly, if those harmonies didn't give you the chills, I don't know what will.

However, all these emotional moments and rocky bangers couldn't compete with their last song of the night, 2017's 'The Time I Met The Devil'. This was the song where Brave Giant really went "apeshit". Singer and guitarist Podge Gill even went off stage to start a call & response to the Isley Brothers' 'Shout'. Throw a little bit of Eurythmics' 'Sweet Dreams' and 'Freed From Desire' (You know, the 'Will Grigg's on fire' song) in there, and you get an epic mashup.

This was an important show for Brave Giant who didn't get tired of repeating how grateful they were to be here, not only thanking the audience but also their families. "To sell out the Olympia Theatre is a fucking dream come true. Thank you to our families, this is your night as much as ours", they declare at one point during the concert. You know what they say: Never forget where you come from, even/especially when you sell out the Olympia.

New Irish Songs To Hear This Week
Live Review: Trinity College showcases superb music talent during Freshers Week
Album Review: Vieux Farka Touré Et Khruangbin - Ali
Live Report: The Black Crowes Shake Your Money Maker at 3Arena, Dublin
Yewande Biala: "A lot of people don’t see police brutality up close in Ireland, so they don’t believe it's here"
Student Special: "Although it's important to be aware of what's happening in the world, doomscrolling is harmful in a plethora of ways"