Interview – Lisa Gerrard: "I was brought up in a house where there was sean-nós singing and poetry..."
Lucy O'Toole

As Lisa Gerrard releases her new collaborative album Burn with Jules Maxwell, she reflects on her Irish roots, and four decades of Dead Can Dance...

Whether joining forces with Hans Zimmer on the award-winning Gladiator soundtrack, helping to establish the reputation of 4AD in the early ‘80s as a member of Dead Can Dance, or working on any other of her numerous solo and collaborative projects over the last few decades, Lisa Gerrard has carved out a captivatingly unique path in music by refusing to conform to the traditional limitations of sound, genre, era, cultural barriers, or language.

Her new album, Burn – a collaboration with Bangor-born composer Jules Maxwell – finds her continuing to push at these boundaries, to present a project that ambitiously blends elements of electronica, cinematic soundscapes and world music. The project is a notable departure for both artists – whose creative partnership stretches back to one of Dead Can Dance’s world tours, when Jules was brought in as a keyboard player.

“We got quite creative together,” Lisa tells me. “We were doing an improvised piece together every night, and we started to really like working together. We have a nice rapport when we work together. We don’t lead one another – we walk side-by-side.”

This creative connection was reignited in 2015 – as Jules joined Lisa at her home studio in Australia to collaborate on material for the Bulgarian choir Le Mystère des Voix Bulgares. It was during this time that the pieces that feature on Burn were written: “Or were in their embryonic state, at least...” she recalls.

“It was a bit premature – because when I wrote those vocal parts, I thought I would be able to get the Bulgarian women to sing them,” she resumes. “But they don’t sing in bel canto scales. So a lot of the stuff I had written while Jules was here wasn’t really useful. Like a lot of music, you do things, and nothing ever happens with it.”

However, “good ol’ Jules” wasn’t about to let all that music sit idle. Rather, he developed the pieces over the next few years, and enlisted the help of producer James Chapman, aka Mercury-nominated artist Maps, to bring them together for Burn. 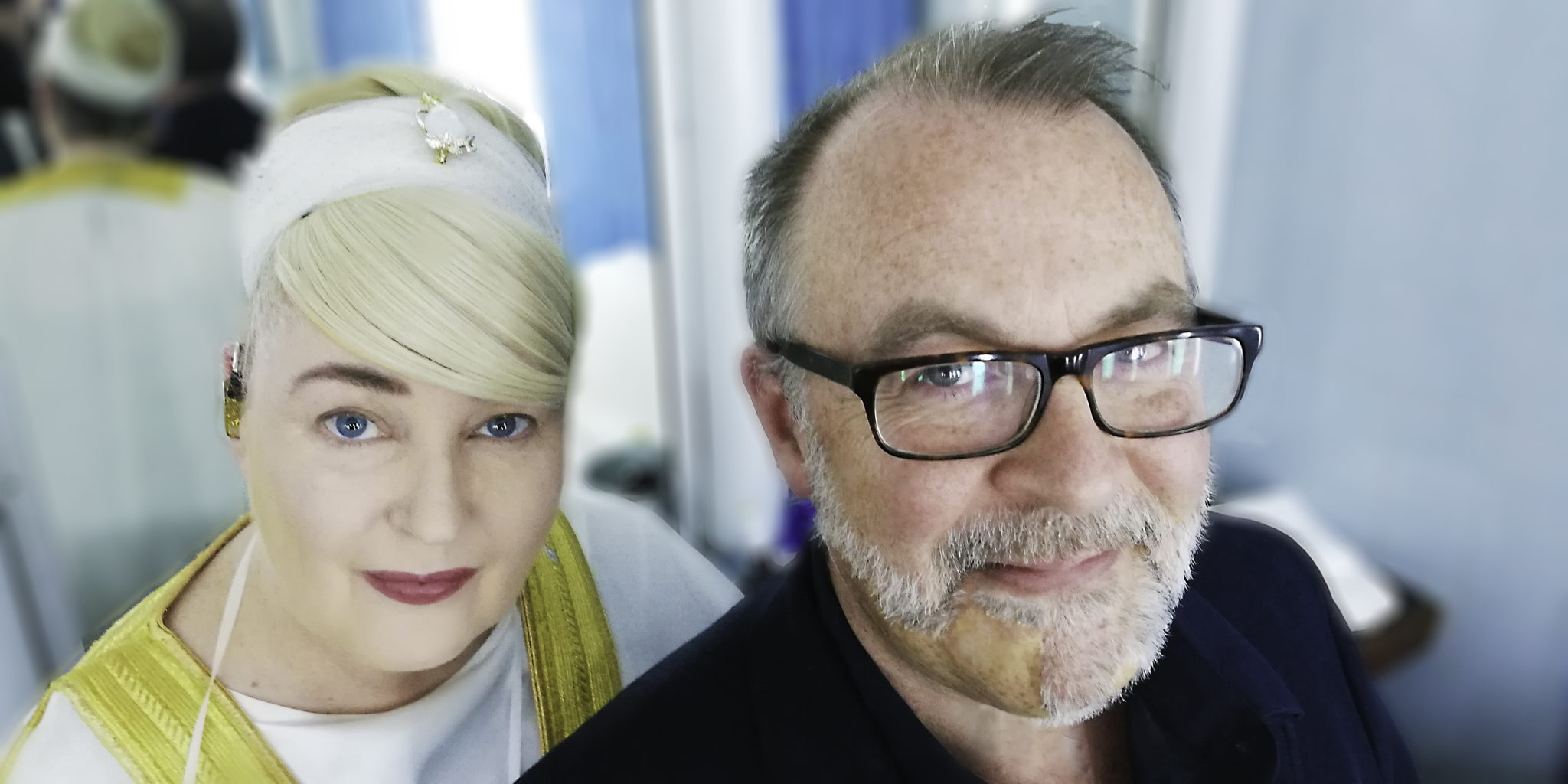 Although many of Lisa’s previous releases have clocked up Spotify streams in their millions (‘Now We Are Free’ alone has with over 131,500,000), with coveted spots on plenty of major playlists, one of the recent singles from Burn has also made it onto a playlist celebrating the best of Irish music – a fact she’s delighted to hear, given her own Irish connections...

“My father was born in Co. Meath,” she tells me. “He actually played for the Co. Meath football team. I spent many years in Ireland – Brendan [Perry of Dead Can Dance] and I were based there for eight or nine years. Most of the albums that we did for Dead Can Dance were actually created in Ireland. And Jules also has Irish roots, of course. So I think this music genuinely does have an Irish nationality.”

From her early days in Dead Can Dance, Lisa’s Irish roots have played an important role in shaping her sound.

“I was brought up in a house where there was sean-nós singing and poetry,” she reveals. “Every Sunday during my childhood, we got up and went to Mass, and then everyone came home and had Sunday lunch – and then there was poetry and singing and everyone got drunk and sometimes had a bit of a punch-up! And then everyone went home, rebooted, and did the exact same thing the next week. That was it, for my whole childhood!

“We were immigrants,” she continues. “My parents came out on a ten-pound ticket on a ship. The street that we lived on, in east Prahran [in Melbourne], was predominantly Irish and Middle Eastern families – and I can definitely hear that influence in my music. We didn’t have any money when we were children, so we didn’t go and buy singles and stuff. Music came to us through the direct connection of our community, or through school, or through the families.”

As part of her unique approach to singing, Lisa often appears to blend, or even invent, languages. It’s a feature of her music that’s hugely indebted to her upbringing.

“I remember people used to say to my father, ‘What’s she singing, John?’” she laughs. “And he’d say, ‘Leave her alone, she knows what she’s singing! You don’t need to know – just as long as she knows!’

“I heard all this language being sung around me, and I didn’t know what it meant. I just knew that it felt really powerful, and really moving. As a child, that’s what you pick up.

“Being in an Irish home was also huge in terms of my ability to grow in my confidence,” she adds. “I don’t know how it is these days, but when we were children, I don’t think you could have grown up anywhere where children were celebrated more.”

Although Dead Can Dance was formed when Lisa was still based in Melbourne, she and Brendan relocated to London in the early ‘80s, and released their self-titled debut album on 4AD in 1984. That same year, Lisa also contributed two songs to the first This Mortal Coil album, It’ll End In Tears. Both projects powerfully embodied the non-conformist ethos of the iconic label in its early years.

Following 4AD’s recent 40th anniversary celebrations, it won’t be too long before Dead Can Dance’s debut LP is also hitting that landmark...

“I was recently showing a friend this piece of footage on YouTube – a Bedford concert, when Brendan and I were extremely young,” Lisa reflects. “We’d just been living in London for a little while, and we were quite literally starving. When you look at us on stage in that footage, we just looked so ill!

“I look back, and it seems like a long, long time ago – but I remember it as though it was yesterday,” she continues. “The one thing I feel really sure about, is the fact that we both believed in what we were doing – so much so that we were in that situation, and we were blinded by our love for music. We didn’t see anything else. Even though we were living in the most low income areas – very unattractive aesthetically – it was of no consequence. Because we had this treasure chest of pieces of music and songs that we could visit and disappear into.”

Collaborations of this kind have been at the heart of some of Lisa’s greatest work. It’s a connection that, once formed, “never really goes away”, she says.

“My relationship with Brendan has proved that,” she resumes. “There’s always been so many times when we’ve been separated – in different countries, children being born, living different lives – and we still end up working together. I also see that with Jules and I. Once you make that connection in music, it takes quite a lot to get rid of it. It's an intimacy that’s born of trust.”

As Lisa reasons, while other forms of relationships and bonds can be destroyed through lies, “it’s impossible to lie with music.”

“That’s why I find it really sad when people say to me, ‘Oh, it’s terribly mainstream’ or ‘terribly commercial’,” she says. “You still have to make that sacrifice to do it. You still have to feel, and surrender, and be a poet. I believe every piece of poetry, and every piece of artistic surrender, deserves to be embraced, and honoured. Because it took somebody’s courage.”

Lisa credits her own inherent sense of courage to her Irish background – and she hopes to spread as much of that as she can during these dark days with Burn.

“It’s a very good, positive vibration – not to sound too New Age!” she laughs. “But we’re coming out of the end of something pretty scary, and we’re still not there yet. We need to give as much encouragement as we possibly can.”

Burn is out now.