David Keenan's Alchemy & Prose: A Concert Film documents the distance travelled from his bedroom in Dundalk to the stage of The Olympia Theatre. It also serves as a tribute to a departed friend. "That's what it's all about, that community," he tells Pat Carty.

January 2020 seems like an awfully long time ago, but it started on a high with the release of David Keenan’s long-awaited and triumphant debut album A Beginner’s Guide To Bravery, wherein he made good on the promise that he had long shown. He also took his travelling carnival show around the country, culminating in a celebratory night at Dublin’s Olympia Theatre. Hot Press was present for that very special show; one that both summed up the five years it took for him to get there, and gently closed the door on part one. To mark it, Keenan has released both a live album and a concert movie/documentary – helmed with great skill by director Mark Logan - called Alchemy & Prose.

As well as documenting the first phase of Keenan’s career, the film now sadly stands as a memorial to Gar Kane, Keenan’s bass player and friend, who tragically passed away only recently. I was lucky enough to meet him once or twice myself, and he was indeed a lovely man. Keenan has dedicated the release to his friend and also offers it as a beacon of hope in desperate times.

“We tried to get it in the IFI, so we could go and physically be there together,” says Keenan, down the Zoom line from Catalonia, where he moved just before the lockdown kicked in. “But given the nature of things, I just wanted to get it out [The film was selected to premiere at the Doc’n Roll Film Festival after we spoke]. I've just finished recording the second album, and this film bookends that chapter of my life so beautifully.”

“Obviously it's been an incredibly tough few weeks with the passing of Gar Kane, whose presence permeated every aspect of the journey over the last 3, 4, 5 years; his voice, his playing, and his presence on and off the stage. Grief is tidal, it ebbs and flows, and it's coming on in waves, but I'm just blessed to have known Gar. This COVID thing is killing people, but how many people are dying because of loneliness and isolation? It's a padlock on the neck; we're not being allowed to get together and express ourselves and to hold each other. This film is full of hope. It's full of testimonies of what music brings to a life, and what it brought to my life, and how it brought me from Dundalk to Dublin, finding that tribe, and realising a dream. Now so more than ever, it needs to be nurtured and preserved and protected and respected.” 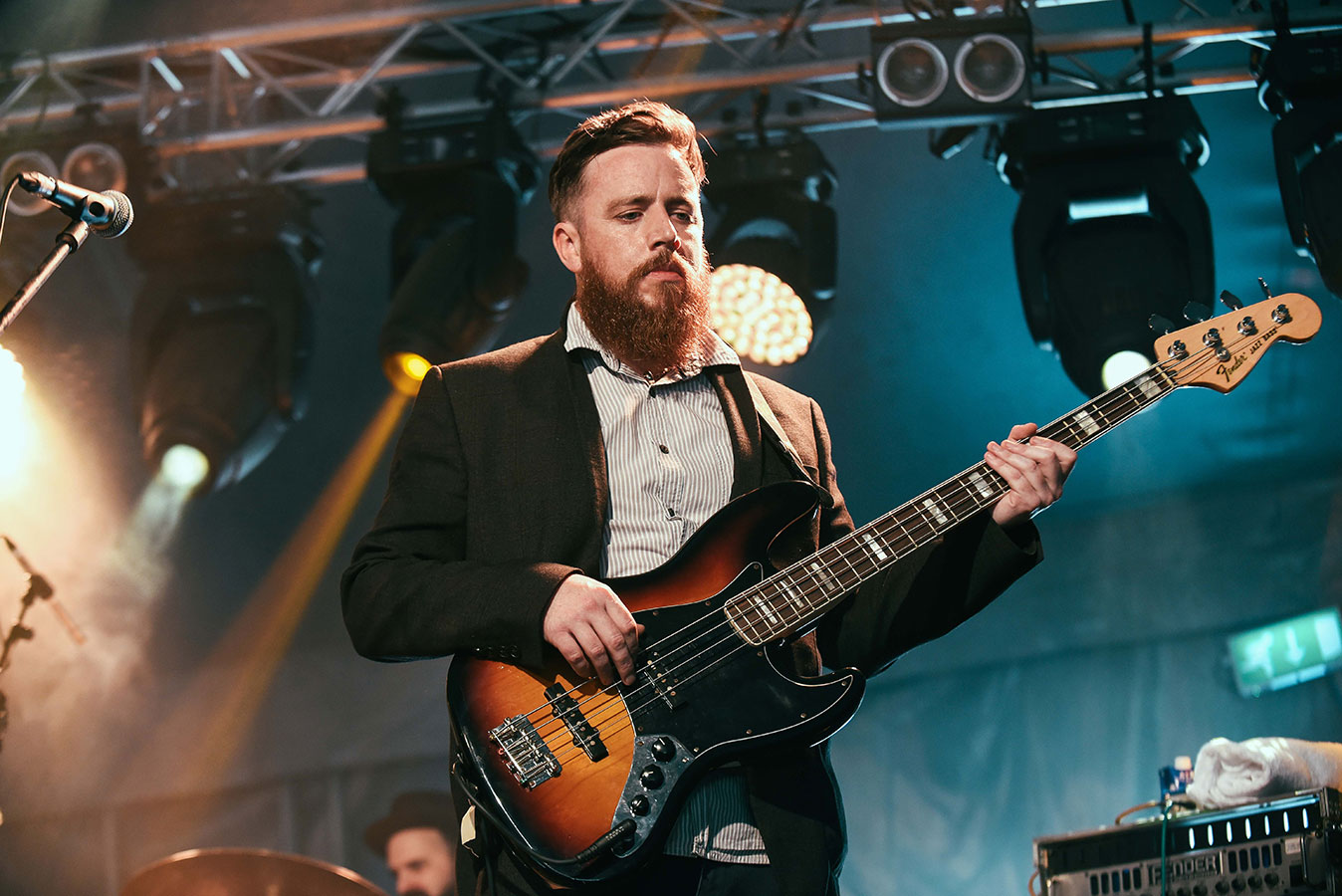 The title, Alchemy & Prose, is a good one. Keenan explains what it means to him.

“I think the title sums up what the live thing is, people in the room as the heat is being turned up, and you're hopefully invoking a sense of connection with the audience. And then this other thing happens, people become free, inhibitions go out the door. The band creates the alchemy behind me, and I can spit out the lyrics. It certainly was in that room that night, you could see people grabbing the person next to them, that sense of unity. It's my life over four or five years condensed into an hour and twenty minutes, so there's a strangeness in watching it, but you see what can happen when a group of people believe in each other. Fashionable cynicism gets thrown out the fucking window.”

The film opens with Kennan making himself ready behind the curtain, like a boxer about to enter the ring.

“There's fear involved, you try to overcome that and battle with it. I am a big boxing fan; I did a bit of it when I was younger. I suppose I was building up to that moment to get a chance to play in the Olympia. It's a full house, the curtains coming up slowly and the introductions playing, so it was like going to battle. I remember Brian Larkin [Keenan’s road manager/fixer/confident] putting the guitar over my neck and I said to him, ‘is this it?’ Five years just flooded before me, I was in the Olympia, I got there. You can see in the footage, I'm full of adrenaline the whole way through, it was the biggest night of my life, I wasn't going to go out and start singing at me shoes. And that was our last gig as that band, and the last gig with Gar, which makes the footage more important.”

“I didn't want it to be sterile. I want us all to feel like we were at home in our own space,” says David. “You’re creating a night, you want people to feel like they're stepping into your world. You want them to want to say there.”

The musicians in Keenan’s Unholy Ghosts are each given screen time to talk about what the music means to them. What emerges is a genuine feeling of kinship. It was these friendships that were so important to Keenan’s development when he moved to Dublin.

“There was this sense that you're around people who can bring out the best in you naturally,” Keenan remembers. “I always wanted to be part of a gang, I wanted to be part of a tribe. And I saw the limitations of just me and the guitar, but if I could gather these people, you could just do more with it, you could elaborate on songs, you could make a better gig, and also it was more interesting for me, because I've been doing the thing with me and the guitar for 10 years. There comes a point where you want to grow and you want to evolve.” 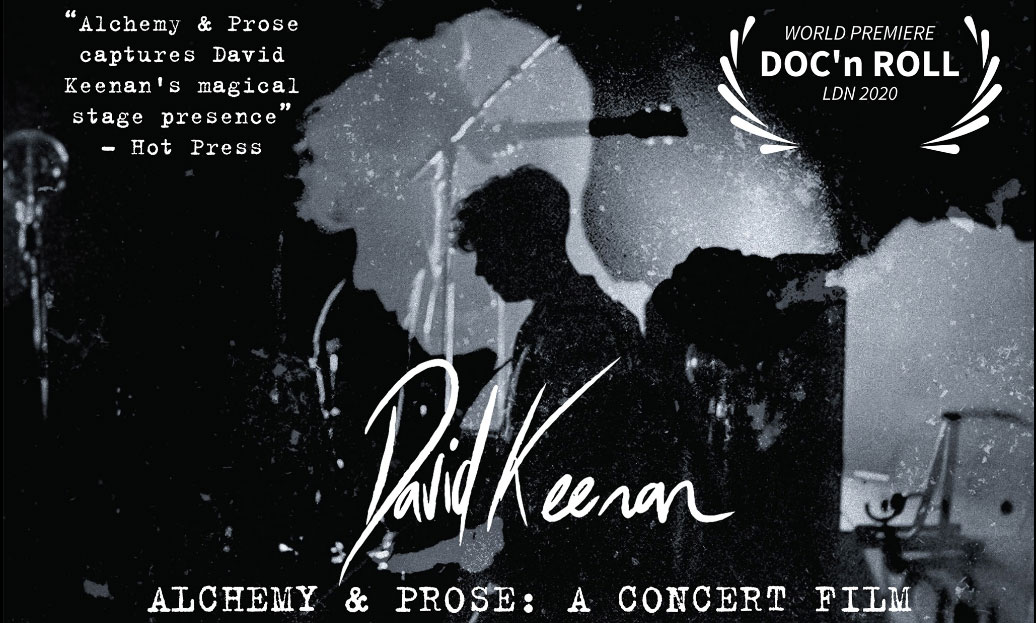 You can see, in Harry Hoban’s interview, as well as the accounts from more seasoned veterans Gavin Glass and Graham Hopkins, that the musicians around Keenan believed in him, right from the off.

“Harry's always been over my shoulder, himself and Gar. I met him in Sin É at an open mic night, and I thought ‘that fucker's laughing at me!’ but we just hit it off immediately. I met Gar that night as well. Harry and I talked all these things into existence over years, his is one of my favourite moments in the film. I met Gavin in Whelan's one night, and he said to me, ‘I have to get a microphone in front of you’.

“I fought Gavin many times, he was just trying to give me advice along the way. You think you know everything and you think somebody doesn't understand your vision. There's a real love there between us, he taught me. I had 'Evidence Of Living' on the guitar and it was like a Pogues B-side, but Gavin started playing this little progression in the studio, and I put down the guitar for the first time. I can never forget it.”

Keenan used the extra time allowed in the live show to sum up his work to that point.

“I had so many songs that weren't all going to fit onto a record so why not stretch them into a two hour gig and give people something different and give people their money's worth? A lot of people in The Olympia would have been with us from the beginning, but also there were people that got into it over the years, so I saw that as an opportunity to document that period, but also knowing that I wanted to make a second record, so I was giving all these things a chance to be heard, but then to move on. The film encapsulates all that, book ends that period of my life, and frees up some space in my head and my chest so that I can move on, to something different.”

Watching ‘Subliminal Dublinia’ at the end of the film with its refrain and call to “occupy the city with original ideas” as the images cut to previous smaller gigs in The Grand Social - that was a good night out - and The East Side Tavern, it strikes a long-time Keenan fancier like myself that he did it, his ideas did occupy the city, he got there.

“Yeah, it was about planting the flag. You ask yourself, ‘Do I have it in me to achieve these things?’ and you see the confidence in other people, and you think ‘Yeah, why can't we achieve this?’ And so to make it to the Olympia, was for me like reaching the peak of Olympus in Dublin, after kicking around dust for a few years, trying to get a gig here and there. This is the power of music, and this is the power of a group of people. It's a reminder of the importance of just fucking going for it, it’s about just living in the moment and appreciating. And so why not plant your flag with people that you love around you? And people in the room that have been following you for five years? You know, go for it.”

Alchemy & Prose is also as much a celebration of the audience as it is of the artist.

“Absolutely, I think that has to be recognised because if nobody was coming to the gigs, I wouldn't have the means to travel,” Keenan agrees. “When audiences grow, it gives you a sense of confidence. It's not about building an ego; it’s about getting through to people. The Olympia was full before I released the album, it wasn't as if I’d released two or three records and there were 15 million streams online. My story kind of unfolded gradually over the years, be it Whelan's upstairs or downstairs; you might get five or ten people at a time that become really invested in you. It's an independent story. There wasn't backing from my big management companies or big labels. It was word of mouth for the last five years, groups of people coming and then telling their friends.”

Every one of us is missing the live music experience at the moment, so a film like this does remind us of what we’ve – temporarily, hopefully – lost and offer hope for the future.

“That's it. Hope. It showcases the positive change that music and an ideal and a dream can make to a life. It’s about a young lad who’s given his life to music. And these things are happening as a result. Obviously, there’s been a lot of fuckin’ hard work, a lot of trusting people, a lot of encouragement, and a lot of generosity. But if there's a young man or young woman watching this film, I hope it shows that you can do it. You don't have to sign your life away when you're 15. You can do it your own way, find the tribe of people and trust in that.”

“This film is a celebration, there's been a lot of laughter just reliving the moments. And, you know, it's a testament to Gar Kane as well, and the support that his family has shown us, and how the community rallied round after his passing. That's what it's all about, that community.”

The Return Of Joe Soap: An Interview With David Keenan
Album Review: David Keenan - WHAT THEN?
The 12 INTERVIEWS OF XMAS: David Keenan on the release of his debut album A Beginner's Guide to Bravery