Achtung Baby U2 Niall Stokes [originally published in 1991]
There is no question about it. He may look as if he's been dipped in a bottle of red ink, but it is Adam who stands there bollock naked before the camera and the world on the back sleeve of the latest, long playing opus from the band whose name begins with U and ends with 2. And is that Eve who hovers topless behind Bono on the front?

It's a long way from the palpable innocence of Boy, this seething odyssey into the dark underbelly of inter-personal exchange, signalled on the cover by a series of images of shameless lust for low-life and the exotic. It's a long way too from the clarion-like conviction of those early years, best characterised in the religious dedication of 'Gloria'. “I try to speak up”, Bono sang back then, if you remember, “but only in you am I complete. Gloria in eo Domino.” And the guitars rang and the angels sang and the heavens rejoiced. Rejoice! I cannot think of a more alien concept to Achtung Baby.

Instead we are confronted here with a world of intense uncertainty, a world in which bearings have been lost, in which cruelty and betrayal, lust and infidelity walk hand in hand – a world in which the metaphors of religion have quite clearly given way to the metaphors of sex. “If you want to kiss the sky, Better learn how to kneel,” Bono sings on 'Mysterious Ways', and in another context it might have been taken as a reference to prayer. But here humility gives way to humiliation, as he interjects with the authority of a dominatrix: “On your knees, boy”. 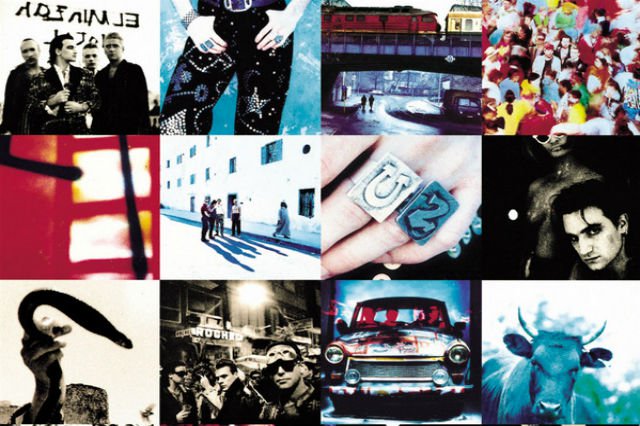 Pleasure and pain. The desire to deny those to whom we are closest the freedom we crave for ourselves. Confronting the terrible truth that in love there are no rules – these are the kind of themes that refuse to be ignored when all your own assumptions of certainty and security and fidelity are blown apart on an intensely personal level.

Achtung Baby is not U2's Blood On The Tracks but at the very least it is a distant cousin of that epic saga, full of pain, hurt and resentment.

It opens on an appropriately disorientating note. Like a machine it splutters into life with ugly slabs of industrial noise. Larry picks up a harsh techno beat and Bono's dehumanised voice comes in over the top, offering itself up to chance. “(I'm) ready for the shuffle, ready for the deal, ready to let go of the steering wheel, I'm ready, ready for the crush!” There is an undercurrent of impending violence here, a thread of anxiety that runs throughout 'Zoo Station'. But there is also a sense of fearlessness that comes from recognising the animal in all of us. “In the cool of the night, in the warmth of the breeze,” Bono sings. “I'll be crawling around on hands and knees.” But he's ready to say that he's glad to be alive all the same. Voices reassure us that “It's alright, it's alright, it's alright” – but they sound more like riot police trying to control a demonstration which has exploded in panic than anyone genuinely capable of pouring calming oil on troubled waters.

Achtung Baby is loaded with these kinds of paradoxes. In many ways it is the bleakest U2 album, but it also contains some of their most obvious singles – pop songs which are deceptively accessible while dealing in harrowing emotions, the illusion of something throwaway masking the search for a deeper truth. Achtung Baby at once evokes the spirit of T. Rex and Scott Walker, The Beatles and the Stones, Bob Marley, Al Green and Leonard Cohen. It is trashy, ambitious, subversive and profound. It sounds less like the U2 that we know than anything they have done before and yet it is unmistakably them, their signature indelibly inscribed into the grooves, from the Edge's first guitar colourings on the opening track onwards.

It can seem gratuitous, after a brief acquaintance with a record, to identify highlights because as every critic knows, where music is concerned, colour and shading and emphasis shift with time and sometimes it's only after months that particular songs insinuate themselves into fullness. But there are cuts here whose potency defies equivocation. On first hearing, and still one week later, 'One' seems transcendant, a magnificent synthesis of elements: words and music, rhythm, instrumentation, arrangement and intonation combine to create something that speaks a language beyond logic, the definitive language of emotional truth. “Well it's too late tonight,” Bono sings, “to drag the past out into the light…” and anyone who doesn't understand, well, they haven't been there.

Whoever chose the organ here was a genius – or maybe, as is so often the case in recording, it simply fell into place. The melody evokes the ghost of Led Zeppelin at their finest. The mocking vocal undercurrents are brilliantly reminiscent of The Rolling Stones circa Sympathy For The Devil. Are these things accident or design? And who chose to add a touch of strings where sax would have been the obvious choice?

'One' looks back to Bob Marley, it recalls the euphoria of 'Angel Of Harlem' from Rattle And Hum and on the final magnificent 4-chord trick of the outro, Al Green looms large behind Bono's vocal performance. Among all these elements it's impossible to say what makes this so utterly inspirational, but it is just that, soul music that avoids the obvious clichés of the genre and cuts to the core. It would, it seems to me, be a certain No. 1 hit – as if that accolade should mean anything! But of course it does, when you imagine the dark brooding mystery of this song being resolved over and over again on mainstream radio.

But then Achtung Baby is full of both potential hits – and dark, brooding mystery. 'Even Better Than The Real Thing' is pure pop, The Beatles of Revolver, and Marc Bolan joined together to culminate in a soulful plea à la Sly Stone. Except that here the appeal to “take me higher” feels utterly and explicitly sexual, rather than spiritual in its intent.

The use of voices is crucial throughout Achtung Baby. Nothing is ever as it seems to be – and where you think that it might, here they come, the voices, buried in the mix, rising and falling, a running ironic commentary on the main theme. 'Until The End Of The World' offers a doomy narrative of decadence and indulgence, reminiscent of Leonard Cohen, which takes on a psychedelic surrealism in the instrumental section before bowing out on pounding drums and a mounting babel of voices, like some medieval vision of the Apocalypse, transported into a rock'n'roll context.

There are times when the record seems to have been recorded underwater, in a black tunnel, or through a long (long) dark night of the soul. The bass on 'So Cruel' is sub-aquaesque like a baby's heartbeat on a foetal monitor. "I gave you everything you wanted", Bono declares. "It wasn't what you wanted". And in the background the voices moan, a kind of mock chorus incapable of taking the personal tragedy in the song too seriously.

A ghost, whose presence is palpable through all of this, weaves in and out of focus – the woman who moves in 'Mysterious Ways'. There is an impression at times of a conversation between band members, or that the theme involves all women, or indeed all the subjects (or the objects) of our love, male or female. And the conclusion is that even love itself, shrouded as it can be in rhetoric, equivocation, pose and dishonesty, is not to be trusted.

It would be wrong to take any or all of this as autobiographical – there is certainly more of the Edge in the lyrics than on previous U2 albums, and doubtless Bono is acknowledging dark elements – or elements that might conventionally be seen as dark – in his own psyche. But there are personae adrift across the landscape of Achtung Baby also.

To what extent is the lead singer in a band an actor, donning masks, adopting stances and expressing emotions which are only partially his own? Or to frame the question differently, are we the audience not also actors, pretending to be something which we are not but which gives us the illusion of a place in this world? There is a sense here of a band not so much on the run as on the slide, their grip loosened if not lost, opening themselves up to the teeming risks of life on the edge – and revelling in that new definition of freedom.

It’s a tightrope act, acknowledging that everything we feel and do is conditional, in which there is always, always, always the possibility of disaster, of being exposed, of being uncovered as a fraud and a whore. “I must be an acrobat to talk like this and act like that”, Bono acknowledges in 'Acrobat' a song which for some reason sounds to me like a message to Sinéad O'Connor with its final plea – “don't let the bastards grind you down.”

But in the end Achtung Baby is so magnificently contrary that if effectively redefines freedom on its own terms. The thread may be ripping, as Bono attests in the final Scott Walker-esque ballad 'Love Is Blindness', the knot, indeed, may be slipping, but those strange illogical reassurances with which the album is littered do indeed finally make sense.

Achtung Baby plunges into the rich complexity of adult experience, the spiritual, the cerebral and the sensual all clashing in a cauldron of ambition, insecurity and desire. Ostensibly decadent, sensual and dark, it betrays a seam of optimism reborn out of personal, social and political chaos. It is a record of, and for, these times.

Achtung! It's dangerous because it's honest. Or maybe, being honest, it truly isn't dangerous at all…

Usually, the road makes you (and U2) more manic. Since “Rattle and Hum” was their most frantic, scattershot album, you might expect “Zooropa” also to be tinged by all the volatile experiences of touring. If so, it’s expertly hidden. Without its own “Helterskelter”, U2’s latest is no roller-coaster. The major surprise is that it’s a far more measured, coherent record than “Achtung Baby”.
“Zoo T.V.” may have been dramatised as a circus of media overload and misinformation, but “Zooropa” dives beneath all that surface chaos and static. Instead it distils the music and makes the decisions that were delayed at the several crossroads of “Achtung Baby”.
That album occasionally suffered from an air of contrivance, as if they felt under pressure to prove themselves. But once your ears have unlocked the codes of “Zooropa”, you’ll find it wins by its consistency of tone and scale. Nothing here screams ‘hit’ like “One”, but neither are their tracks when you wonder if U2 are second-guessing either their audience or radio programmers. 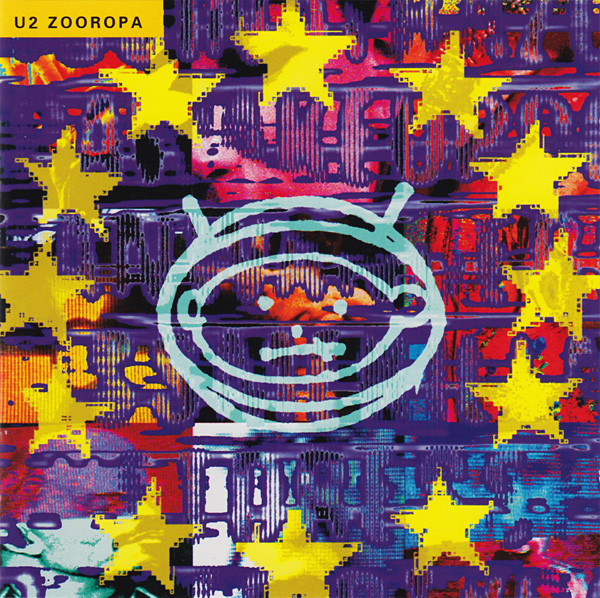 U2 fan launches campaign to help 'One' reach one billion views on YouTube
On this day in 1992: U2 release single 'Even Better Than The Real Thing'
Happy Birthday U2 - Bono At 60

U2 - Under The Covers
My Favourite Things: Prince and Sign O' The Times
Album Review: U2, The Joshua Tree Super Deluxe Edition
The Message- Looking For Hope In A Desolate World
Live Report: U2 eXPERIENCE + iNNOCENCE, The SSE Arena, Belfast
Music Network and Dún Laoghaire-Rathdown County Council reveal details of 2021 Musicians In Residence scheme
We use cookies to ensure you get the best experience on our web site - by using this web site you consent to our use of cookies. Read more »