Over the past 12 months, society in Northern Ireland has undergone a sea-change, with the introduction of same sex marriage and abortion. Rock ’n’ rollers, however, have decided that the fight for equal rights is only starting. That’s the thinking behind a new EP, The Fight Is Not Over, which features four of the North’s most exciting punk-influenced outfits.

The slogan is emblazoned across the jackets of Strange New Places, onstage at the Ulster Hall at the end of their electrifying set at the NI Music Prize show in November. “As much as the small victories are meaningful and worth celebrating, our work is not done,” lead vocalist Ashley Jones tells the packed venue, and the words are beamed out across Northern Ireland, via the live radio broadcast of the event.

“While injustice persists, we won’t shut up. Until a sea-change in our society affords us autonomy rather than oppression, we will not be satisfied. We aren’t there yet, which is why we’re still here.

“The fight is not over,” Ashley insists. “Join us in it.”

Activists in Northern Ireland had fought for years to finally achieve the equal marriage and abortion rights that the rest of the UK and Ireland enjoys. However, Strange New Places’ message on the night was clear: we have not reached the end goal. Now is not the time to stop fighting.

Over six months later, the quote adorns the back of a new vinyl compilation The Fight Is Not Over from Belfast label Third Bar. Following a Rock for Choice gig at the Ulster Sports Club last year which Strange New Places headlined, I had spoken with some of the acts on the line-up for The Guardian. The musicians voiced their frustration with the region’s lack of social progress. They made no secret of the fact that they were explicitly giving the middle finger to the politicians, who were upholding these draconian laws.

Music, it seemed, was an effective and cathartic form of protest.

After reading the article, Davy Matchett, who co-runs Third Bar Artist Development with Snow Patrol frontman Gary Lightbody, came up with the idea of capturing the spirit of protest which inspires these bands, on an EP that would consciously showcase their most political material. Involving several of the bands I had originally spoken to, The Fight Is Not Over was born, taking its name from Strange New Places’ landmark set. For many of the featured bands, it is their first time on vinyl.

On the four-band EP, Sister Ghost, Gender Chores and Problem Patterns join Strange New Places in recording live versions of their most potent protest songs. Artist Jacky Sheridan has delivered a bold and colourful sleeve design, which aims to invoke “a sense of solidarity with the people involved in the record itself – people who are down to their last spark energy wise, people who’ve been pushed down and trodden on, but have gotten back up.”

Published at the height of pre-Brexit tensions in the North, with a collapsed government and the DUP still exercising its chokehold on equal rights, my Guardian piece was a sobering snapshot of Northern Irish politics at the time. Soon afterwards, in October 2019, equal marriage and abortion were finally introduced, in the absence of a Northern Irish assembly, through a Westminster bill.

As the first same-sex couples tied the knot in February this year, however, the path to providing abortion access remained fraught, with more obstacles to surmount. The new law faced a rear-guard action from the DUP, with the result that some people were still forced to travel to London and elsewhere, in spite of the pandemic.

Nearly one year on from the introduction of what should have been empowering, new legislation, the punks of Belfast’s music scene are not yet satisfied and echo Ashley’s call for further change.

Having won Best Live Act on the night that Ashley called the music scene and the wider community to arms, Sister Ghost’s Shannon O’Neill has never shied away from overtly criticising leaders at Stormont. ‘Fake Friends Run This Country’, the opening track on The Fight is Not Over, is an unrelenting, fast-paced, anthemic wall of punk fury and a rallying cry against self-interested politicians. The video sees the band clad in bowties and rosettes taking over the empty Assembly building, bouncing around and knocking down frames of Donald Trump, Boris Johnson and DUP leader Arlene Foster.

For O’Neill, the track is, sadly, as pertinent now as it was then.

“I think that song will always be relevant, as ironic and grim as that might sound,” she says. “There will always be a machine to rage against in every society.”

The Derry native is nothing if not ambitious. 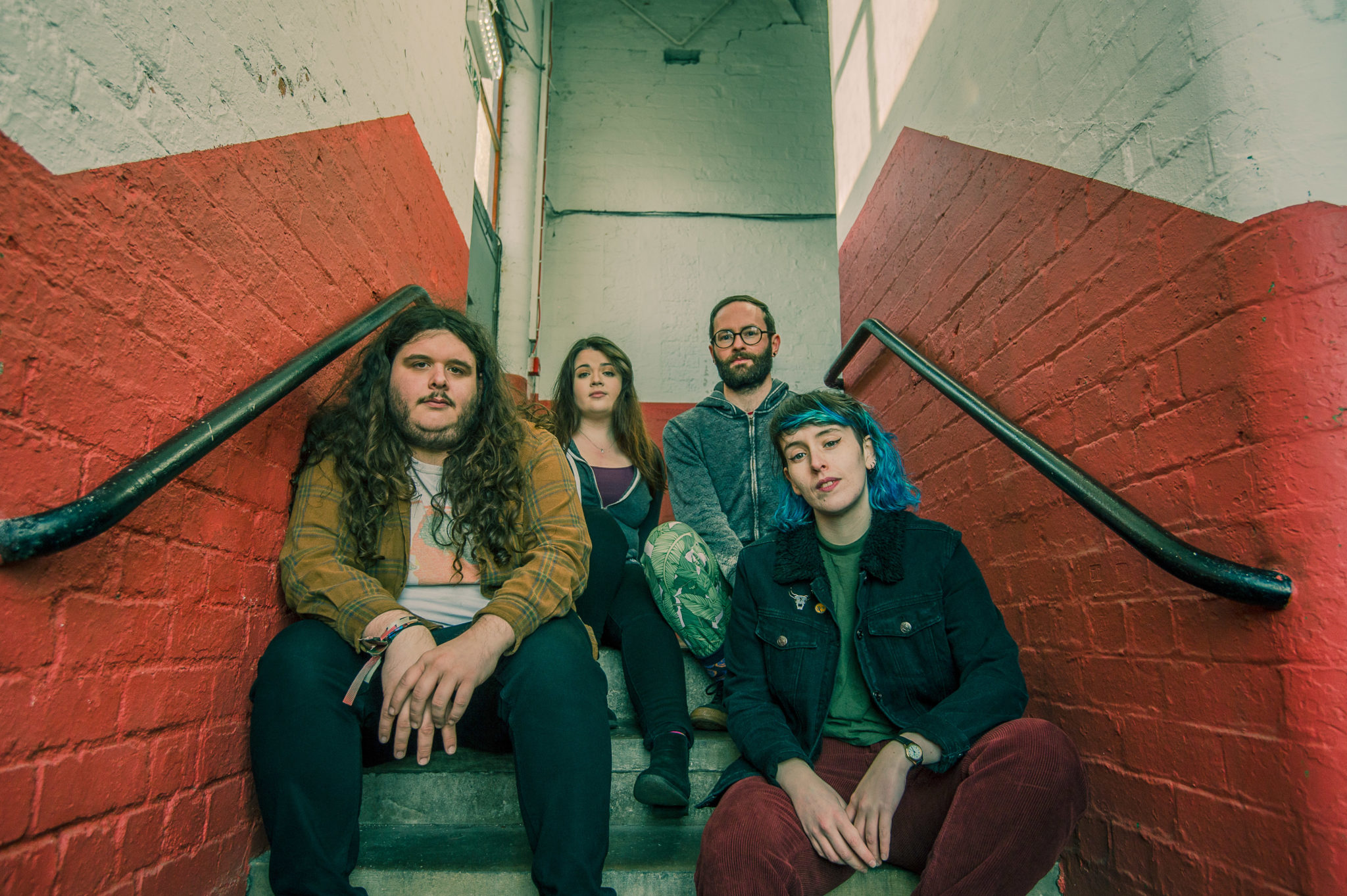 “I want to change the ingrained societal perceptions towards both issues [same-sex marriage and abortion],” she says, “by working on how these topics are addressed and spoken about in schools so that future generations are more compassionate, supported and informed.”

From self-serving politicians to gender dysphoria, Strange New Places’ contribution to the EP takes the form of ‘Mr Gumble’, an exploration of sexuality, confidence and Simpsons references. For bassist Caleb, the song marries jaunty light-heartedness and the often distressing reality of dating as a transgender person.

“It’s a bit of a bop,” Caleb says, “and then you listen to it and it’s like, ‘Oh, this is actually quite sad’. Because these are the struggles of transgender people, myself included, trying to assimilate into a nicer image of what I can be, a more palatable image of what people expect me to look like.”

As well as expressing the need to actively create safe spaces, and to platform women in music rather than just paying lip service to the cause, he sees the state of healthcare for trans people as another crucial component in the ongoing fight.

“It is abysmal,” he laments over Zoom, “I was very lucky to access healthcare as soon as I turned eighteen when they weren’t facing a mad overload, and now people are on waiting lists for years for vital healthcare – and they’re having to start self-medicating. It’s killing people.”

Strange New Places almost accidentally coined the phrase that has given the EP its title. Whilst throwing around ideas for their NI Music Prize performance, they ended up landing on something quite profound. A matter of weeks later, they were backstage at the Ulster Hall struggling with tape to put the words of the slogan on the back of each band member’s jacket.

“People are quick to say, ‘You have marriage equality now, so what are you complaining about?’ – but that doesn’t represent the entire LBGTQ+ community, it’s just one issue among loads,” Caleb argues. “We want to keep up that momentum for queer-led spaces, where LBGT bands can thrive and flourish in safety with their audience, and have them feel protected as well.”

In recent weeks, reports of abuse from within the local music scene have surfaced, with some victims openly sharing their stories on social media. Bands spanning the musical spectrum have shared messages of solidarity, expressed regrets about having worked with alleged abusers in the past and promised to combat abuse in the community in any way they can.

Jealous Of The Birds, one of the North’s most prominent acts, have led the way by axing their lead guitarist following multiple people coming forward with accounts of his abusive behaviour towards them.

Getting involved in the creation of the EP was a natural fit for straight-shooting queer punk trio Gender Chores. 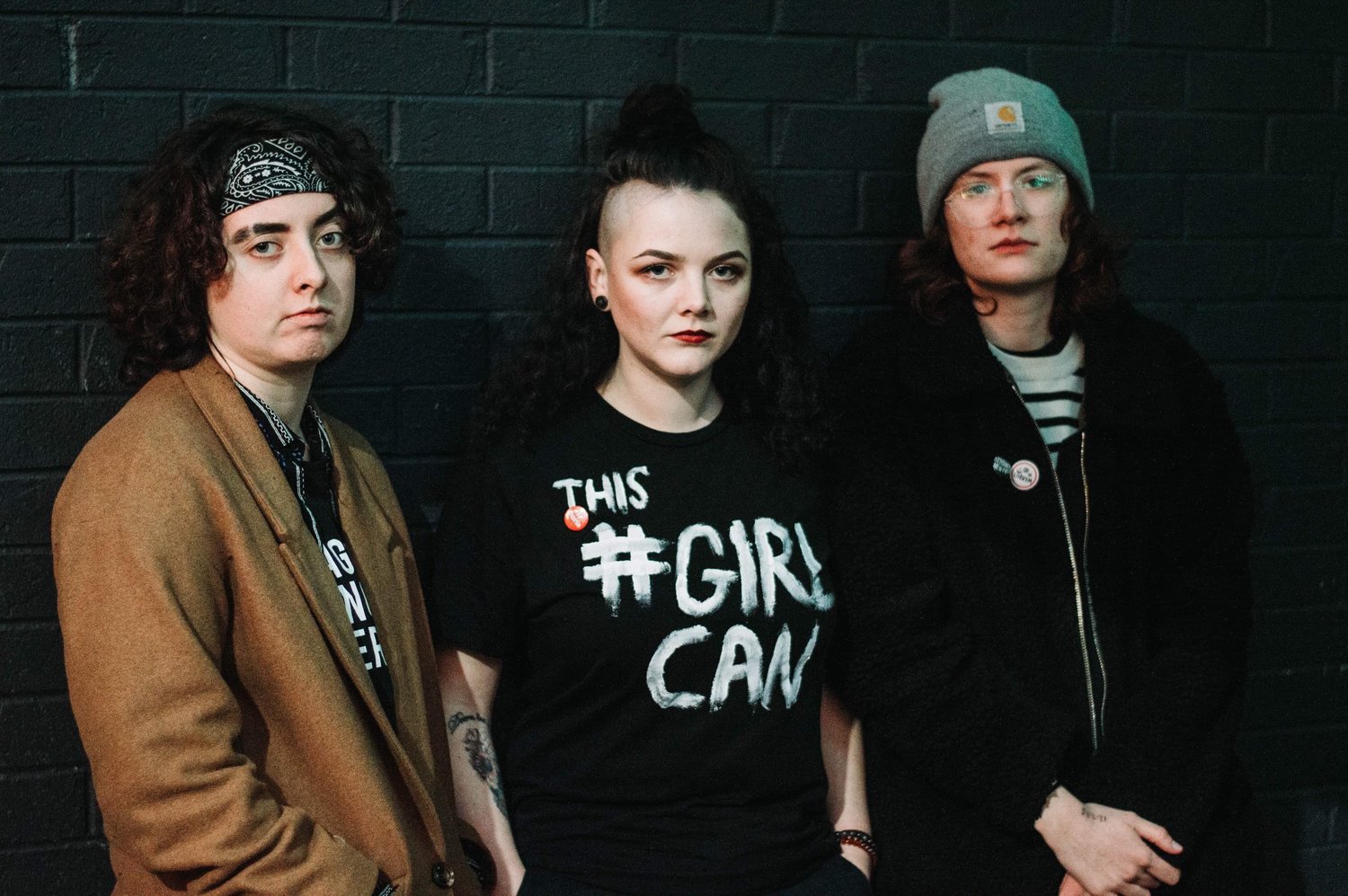 “I think that’s the best sub-genre to do a project like this on,” says drummer AJ. “Especially considering how, for all four of us [on the EP], every single song is political or is talking about a situation or idea that’s a bit of a taboo subject.”

Side two of the EP kicks off with the jagged riff and snarled lyrics of Gender Chores’ ‘Territory’ – capturing all the urgency of a live performance.

“‘Territory’ was the first song we wrote as a band,” guitarist and vocalist Sam explains. “It was off the back of a very high-profile rape trial in Belfast at the time and it just seemed there needed to be some kind of statement made. The particular line ‘I’m not a sentence in your story’ is a double entendre because it’s talking about a prison sentence and how that would be the thing that people seem to get so defensive of, that these abusers lives are going to be ruined. But that’s a victim’s story as well and that’s their life. We need to listen to victims and stop apologising for the behaviour of people who abuse.”

In light of recent allegations, lines about ‘predatory glory’ have a special resonance.

“The fight is just starting now,” according to bassist Soph.

Sam concurs: “It feels like the odds are stacked against minorities. That’s another big thing we’re fighting against, outside of the music scene, where we have more control and an ability to actively make change.”

Whilst lockdown has forced Gender Chores to take their activism online, supporting grassroots campaigns, signing petitions and sharing resources, it’s easy to forget that not everyone shares their ideology.

AJ reflects on the need for a wider reach: “That’s a fight as well. We’re in that lovely, cosy queer bubble in Belfast, but our music tries to transcend that. I think everyone’s music on that EP does – we’re trying to move past that and get the music out to absolutely everyone.”

Closing the EP, Problem Patterns pull no punches on their rage-fuelled, frenzied punk anthem ‘Sell By Date’. The four-piece does not have a singular front-person, instead opting to switch roles and instruments. The unambiguous lyrical content of their EP track deals with the societal pressure to have children and the incessant conversations that plague anyone who says they don’t want to. 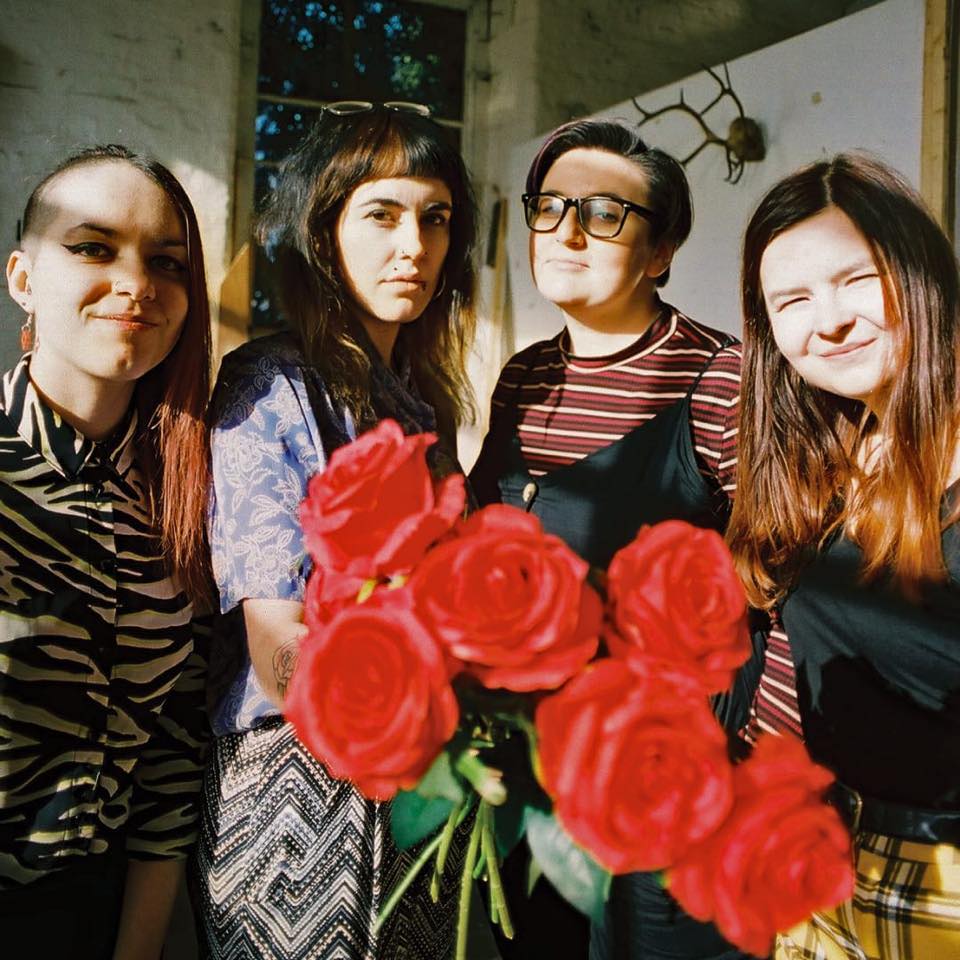 “You should just be respected for your life choice,” Alanah says of her experience. “I’ve found that’s the one that’s had the most personal reaction in terms of people coming up to us after a gig.”

Beverley elaborates: “It’s also something put on young kids, like they have baby dolls and pram toys and it’s a bit strange, like, that’s what your life’s leading up to.”

Ciara agrees: “It’s the big grasp of traditionalism that people hold onto.”

Problem Patterns embrace punk’s uncompromising bluster to deliver their message, but with a soft and gooey centre.

“Punk always comes from some counterculture or response to something,” Ciara believes. “And especially in Northern Ireland, with its big old weird history, it’s always been speaking about how fed up it is with the way we are and it’s always wanted a nicer, more compassionate community.”

Performing may act as a kind of primal scream therapy for the band, but providing a safe and accessible environment for their audience is equally important.

“The fight is not over because if every one of us is not safe, then we have a lot of work to do,” Ciara adds. “I think men coming out and saying they don’t stand for it [abuse] is a massive movement that we’ve really needed. The queer punk pocket has always been saying this stuff, but seeing the male bands and non-political bands also coming and standing behind it means a lot as well.”

With the return of live music still uncertain and safety being a top priority for the band, they are wary of leaders being too hasty in the easing of social distancing restrictions.

“We’re not punks who are like, ‘fuck the rules!’” laughs Bethany.

But what could be more punk than not trusting the government?

• The Fight Is Not Over EP is available on vinyl and all digital platforms with profits going to The 343, an artist-focused, feminist-led queer arts space in east Belfast.