Junior Brother, Emmet Kirwan and more announced for 'This Ain't No Disco Live.'
By: Joey Molloy

Featuring some big Irish names, the lineup for ‘This Ain't No Disco Live’ is out and looking good.

The online Irish alternative music programme This Ain’t No Disco has announced Anna Mieke, Junior Brother, Emmet Kirwan, and John Francis Flynn, for their debut live event ‘This Ain’t No Disco Live’, to be held in D-Light Studios, 7pm, Thursday 26th September. The event will be hosted by legendary DJ Donal Dineen and documented by director Myles O’Reilly. That’s not all though, the showcase will be holding a silent auction and there are rumors that a number of special guests will be making appearances. The star-studded event comes in an effort to celebrate the launch and raise funds for the highly anticipated second season of the show.

For those unfamiliar, This Ain’t No Disco is a dynamic audio-visual showcase, representing some of the most talented but under-represented and hard to pigeonhole musical visionaries in Ireland today. It’s a uniquely Irish event that you’d be absolutely foolish to miss. Grab your tickets for ‘This Aint No Disco Live’ for only €20 via https://uticket.ie/event/this-aint-no-disco-live ! 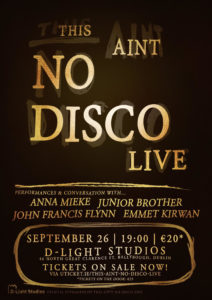