Indie-folk crew Brave Giant talk about their stunning debut album White, Pink + Blue, creating “dark, dark tunes”, and why – despite the odd ruction over count-ins – they’re putting no limit on their ambition.

Landing a headline gig at Dublin’s famed Olympia Theatre before even releasing your debut album is no easy feat, but Longford indie-folk maestros Brave Giant have managed it.

“When we announced the Olympia last year, none of these songs were written,” admits lead singer Podge Gill, pointing to a copy of their debut album, White, Pink + Blue. “So that gave us the incentive to have them released before we do the Olympia. It gave us a timeline of when to start, when to complete it, and when to have everything done. (Laughs) It gave us a kick up the ass, essentially.”

After all, they needed to give fans a bit of time to learn all the words!

“We need to learn them first,” chuckles bassist Mark Prunty.

Playing the Olympia is a real statement of intent. It’s the “holy grail of Irish music”, as multi-instrumentalist Ross McNerney puts it. “The Mecca”, Mark adds.

Podge trails off, struggling to put the feeling into words. “It’s the biggest, yet most intimate venue you can get in Ireland. You’re only a couple feet away from the audience. At the Olympia, everyone’s right close to you. You can really feel the energy of the crowd.” 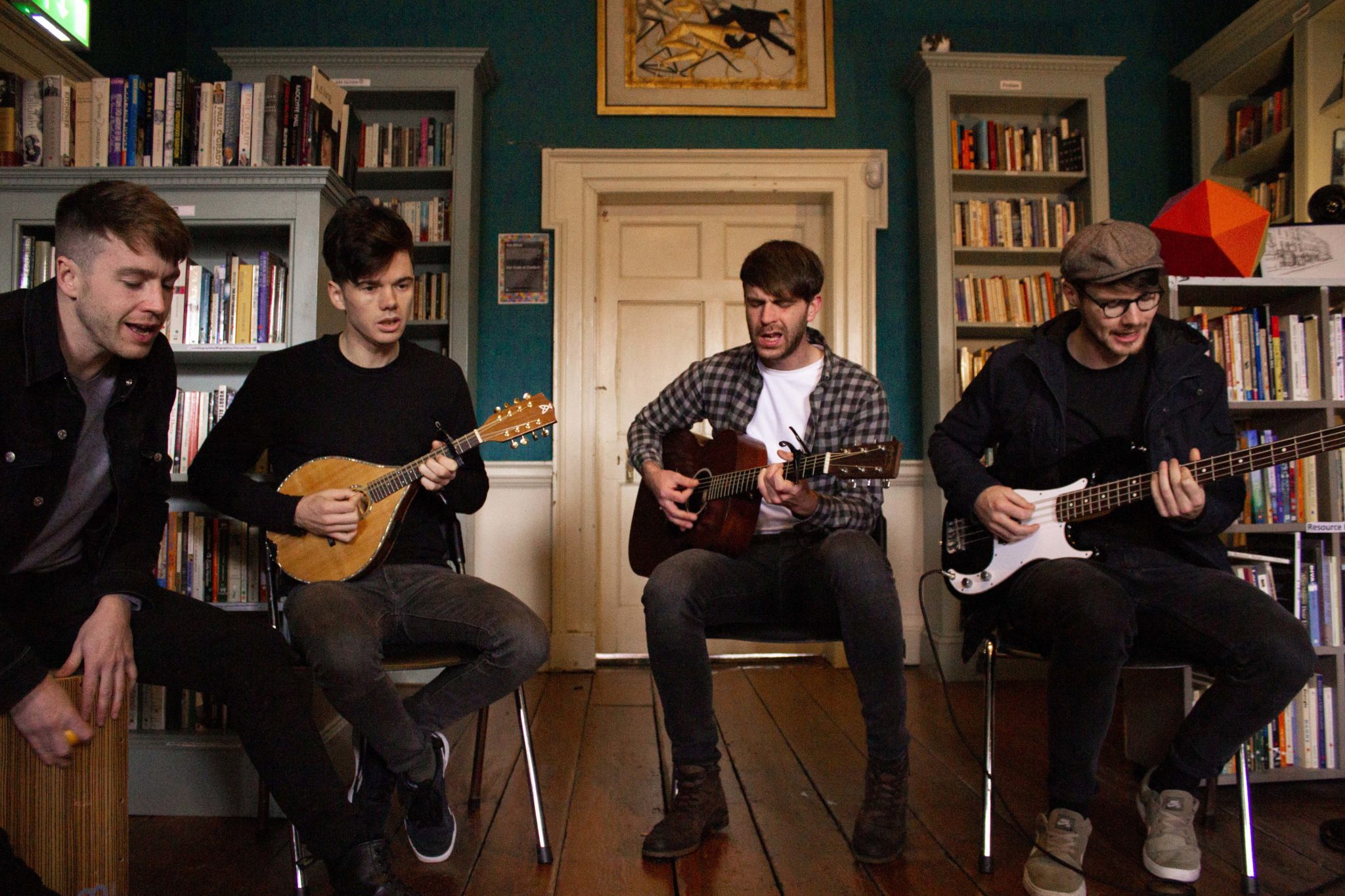 Brave Giant are renowned for their brilliant live performances, but that energy will inspire them to even greater heights.

“Our live sets have become a lot more fun to play,” explains drummer Emmett Collum. “A lot of the tracks we’ve done before – a lot of ballads and stuff like that – have got a little bit slower. But now with the new stuff, we’ve got the licence to go a bit"

“A little more ourselves,” adds Ross. “You’re kind of meant to be a bit…"

“Do a little bit of headbanging,” concludes Mark, with a laugh.

The lads are completely in tune with each other, finishing each other’s sentences and nearly jumping out of their seats with excitement to share everything about their latest endeavours. Conceived as a band nearly eight years ago, Brave Giant have been friends for much longer.

“We all went to school. We grew up together,” explains Ross.

“If we weren’t in a band, we’d go drinking together,” says Mark. “Well, we do that as well. And we play football together – we do everything together.”

They also do their bonding, healing and sharing as a collective. The inspiration for many of their songs, comes from personal experience.

“It’s our personal struggles,” Mark reflects. “Our truth. It’s not just one of us who went through a tough time or whatever it might be. The band shares it and I think that comes across when we’re playing live. It allows all four of us to have a view on the songs in the studio. We’re close enough to have that collective voice in our songs, which is good.” 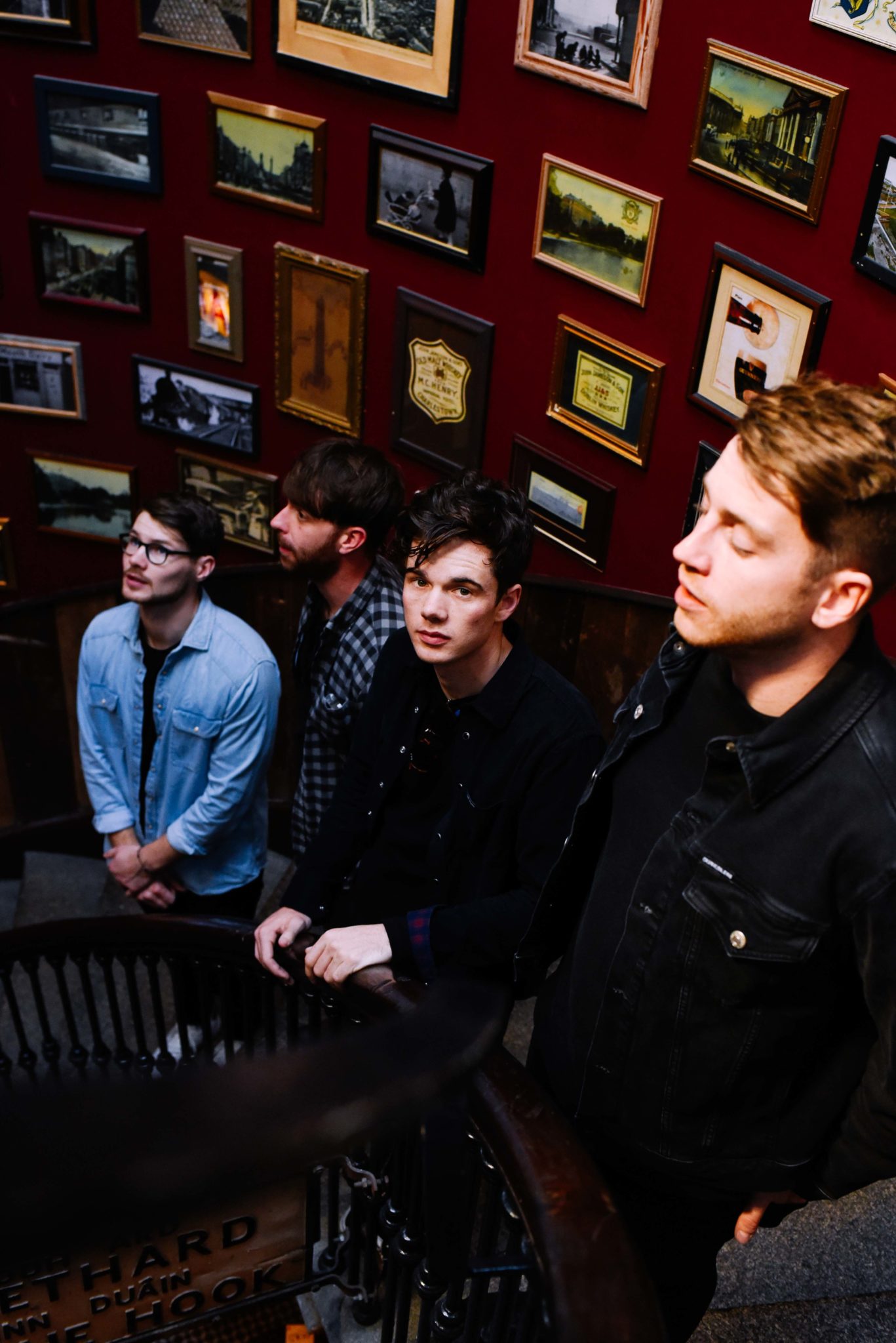 That brotherly love seems all-encompassing. They may have no difficulty coming to a consensus in relation to the songs but there are moments when it seems they might be taking their inspiration from Liam and Noel Gallagher. There have been ‘falling outs’, albeit wholly goodnatured.

“We were doing 2FM and we’re attempting a cover of ‘Little Lies’ by Fleetwood Mac,” recalls Emmett. “So I played it and Ross was like (in a high-pitched voice), ‘It’s a bit… meh’.”

The lads burst into laughter, taking turns mocking the infamous “meh”. Ross, still laughing, admits he now loves the song after playing it. Once the chuckles die down, Podge assures me that they really do get along well.

“Generally, the actual creation of the music is quite easy. Except when you two forgot to count for ‘Otherside’”, he says, glaring jokingly across the table.

A mixture of groans and laughter ensue.

“I don’t even know what happened,” Emmett says, shaking his head.

“I don’t…” Mark trails off, putting his palms up in an I-didn’t-do-it manner.

Convinced he was on the right side of history, Podge explains that the band were trying to figure out the instrumental break for the track ‘Otherside’, and they couldn’t come to consensus on when they were supposed to come in.

Mark and Emmett jump in to defend themselves and brotherly banter ensues. After a few moments of back-and-forth, I’m assured that the track is a cracker.

“We made it work in the end,” Mark assures me. “It’s different.”

“It’s a little bit different, but it was the same idea,” defends Podge.

“Yeah, same idea, but it’s in the normal time now,” agrees Mark. The track in fact turned out to be one of the best on the album, he adds.

“It’s a dark, dark song. There’s quite a punky beat going through it. But then you hear this really light and melodic mandolin breaking through. It works well – well we think so!”

The mandolin, as well as the banjo, add a different dimension to their sound, explains Ross, who plays both.

“Obviously the mandolin and the banjo – they’re folk instruments. They’re traditional instruments. You can’t avoid that. But definitely, on this, they’re messed up. They’re altered. I go into music shops like Waltons and X Music and I’m like, ‘I wanna get such and such a pedal for a banjo.’ They’re looking at me like I have three heads.”

“You can’t do that!” mocks Emmett, at which they all laugh.

“I want a distortion for a banjo,” Ross adds, “or I want a flanger for a mandolin, and they’re like–"

“Get out!” snaps Emmett.

The desire to explore new sounds comes from a myriad of sources. They’ve been doing their homework, expanding their tastes and attending as many gigs as possible for inspiration. Foals are a common denominator in their music libraries right now, with other favourites including Bon Iver, Tame Impala and The National.

As for Irish artists, the lads name Talos, Dermot Kennedy, Fontaines D.C. and The Murder Capital as current favourites. “There’s so much inspiration everywhere in Ireland at the moment,” says Ross.

With charisma, musical maturity, and great things on the horizon, it won’t be long before others are putting Brave Giant on their list of inspirational Irish acts. You just wait....

Pat McManus: “I don’t think it fully dawns on people how dangerously close we are to a situation where the world is changed forever — and not for the better”
Sinéad O’Connor will "never do" Woman's Hour again after “misogynistic” BBC interview
Easy Life's Murray Matravers on Guinness, Leicester City, nerves and Life's a Beach