Yewande Biala: "A lot of people don’t see police brutality up close in Ireland, so they don’t believe it's here"
Kate Brayden

Since walking through the glamorous doors of the Love Island villa for Season 5, Dublin scientist Yewande Biala’s life has been turned upside down. Now using her platform to write about personal and societal issues, Reclaiming is a powerful book from the debut author, addressing issues such as racism, abuse, body image and more.

Seated on a plush couch in the glamorous reception room of Dublin’s Merrion Hotel, Yewande Biala is hoping to nab a few scones. The 2019 Love Island contestant has also been lapping up the (strange) Irish sun before jetting back to her London base.

The scientist has penned a new book, Reclaiming: Essays On Finding Yourself, One Step At A Time. No doubt, she’s faced barriers to publication, not least being underestimated as an “influencer”, but her debut tackles serious issues, such as racism, colourism, abuse, police brutality, self-worth, body image and more.

“The first time I was published was in January 2021, when I wrote an article about the importance of names for the Independent,” she explains. “It wasn’t the first thing I ever wrote. I tried to write a rom-com movie script when I was 13 on a chunky computer. I’d love to go back and read it! That’s when I fell in love with writing.”

During Yewande’s time on Love Island, her name was frequently mispronounced by the public, producers and contestants alike. When she left on day 22, she was given access to her phone, and felt compelled to speak out about her experiences of racist microaggressions and colourism.

“I released a statement on Twitter about my name that went viral, and the Independent asked if I’d like to do a full feature about it,” she recalls. “I wrote it overnight and handed it in first thing. There was a great reaction, which I didn’t expect at all. I did another article for them about colourism, and later got approached by a few publication houses, but they didn’t believe in me as a writer.

“The publishers felt like I needed coaching or someone assisting me. If I was going to tell my story, it couldn’t involve anyone else. I got a book agent and we put together a 16-page proposal on what the book would look like. I wrote three sample chapters, and we pitched to other publishers who could see the vision.” 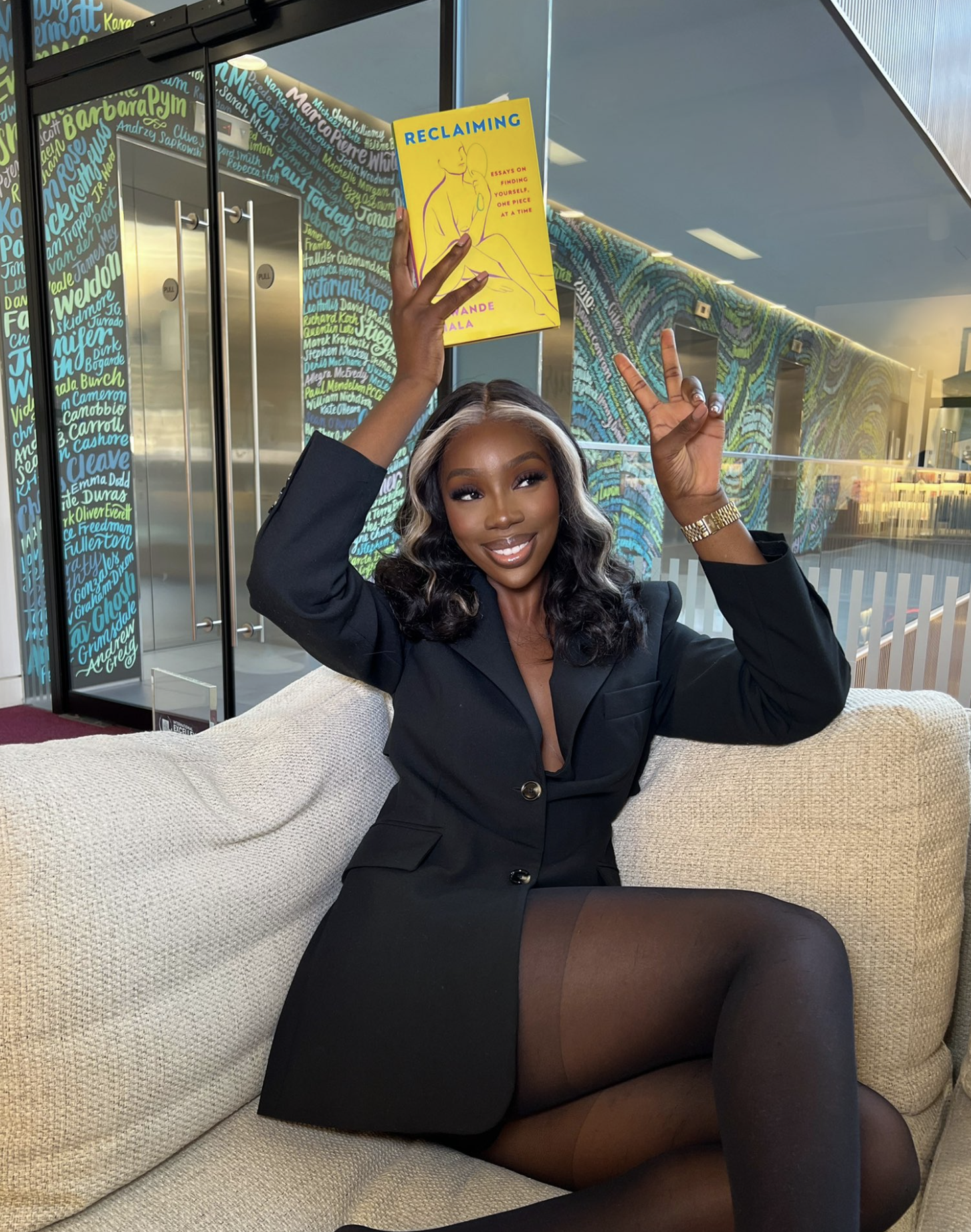 Publishing is also well-known for being one of the most white-washed industries.

“That was what swayed me to go with my current publishing house,” Yewande nods, a veteran of navigating predominantly white, homogeneous spaces as an influencer. “My agent and editor are both Black women. I’m talking about my own personal experiences, so it would be incredibly hard for a non-Black editor to comprehend them or critique properly without fear of saying something wrong.”

Tackling subjects like #EndSARS, eating disorders, dating as a Black woman and her Yoruba roots, Yewande leaves no stone unturned. Having spent five years in university studying biotechnology and pharmaceutical quality assurance, she is more than capable of coherently discussing societal problems in an accessible way.

“I felt a sense of responsibility. A lot of people were surprised at the contents of the book!” Biala smiles, rolling her eyes. “Another Irish journalist said she was shocked that there weren’t any pictures in the novel. I was like, that’s strange? It’s not a child’s book. There’s an assumption that influencers or people in the public eye aren’t intelligent and can’t sit down and write a non-fiction project. I felt like I needed to prove myself. I can bring light to these subjects in a unique way.”

Did Yewande feel pressure to hide the identities of those who appear in Reclaiming?

“All the names are changed, apart from my secondary school teacher,” she says. “It’s incognito. From a legal standpoint, I just wasn’t allowed to print names. But being able to write your own narrative in a book is so liberating. Usually, when you suffer from anti-Black racism or colourism, especially as a public figure, you just learn to deal with it privately.

“You cope and accept that this is the life you’re living. Getting the chance to write about my life in an educational way that’s also loving is incredibly empowering. It’s a blessing in disguise and hugely therapeutic. I knew my family and friends would be supportive because it was open and honest.”

Yewande’s family have memorable cameo roles, teaching her from the beginning that her name carries immense cultural weight and pride. Reclaiming represents the validity of their collective experiences as Black Africans in the diaspora; it means reclaiming the power to fight for an identity that has been diluted through years of forced assimilation. It also represents anyone struggling to find their voice in a world determined to speak over them, as the introduction states.

“I’ve been balancing Yoruba and Irish culture my whole life,” she continues. “When I was younger, I thought you could never be both - that you had to choose one. Representation just didn’t exist back then. Even with TG4, there are so many Black Irish-speakers here but none of them are on TV. This is why younger Zimbabwean, Ghanian or Nigerian-Irish people feel like they have to choose a side.

“There are a lot of microaggressions that suggest if you’re Black, you can’t also be Irish. I get the phrase, ‘If you were Irish, you’d know’ said to me a lot. It’s like you’re constantly being made to feel othered. You learn how to balance the two cultures over time.”

Interestingly, the chapter highlighting the value of names includes a section on deadnaming - the act of referring to a transgender or non-binary person by a name they used prior to transitioning, such as their birth name. Deadnaming may be accidental, or an intentional attempt to deny, mock or invalidate a person’s gender identity. Yewande had to fight all the way for the reference to be included.

“My agent told my editor I was writing it, and she didn’t think it was a good addition,” she says. “I was insulted when she said I mightn’t be able to speak about it with care, and the emotional intelligence it needed. I was so angry, because I’d already written a chunk of the book already at that time.

“How can I write a progressive book and not mention a community that needs so much representation? In the end, I interviewed my manager Allegra, because I needed to speak to someone transgender and have their voice included. It stayed in the finished novel, thankfully.”

Yewande’s own name means “mother has returned”, inspired by a grandmother she never got the chance to meet. She came back to the family via her granddaughter, hence the name. Demeaning her name, therefore, is an insult to her lineage. It also evokes a history of dominant groups forcing new names on oppressed groups.

“I think as a society, universally, we’re moving forward with race,” Yewande posits, when I ask if she’s noticed progress even since her 2019 launch. “We’re being more open and honest about those tricky conversations, whether it’s performative or real diversity. There’s a bit of change, but we’ve got miles to go. It’s definitely a start.”

“It comes back to representation,” says Yewande. “If you don’t see a pale ginger person or blonde person with blue eyes, they don’t think that’s what an Irish person looks like. I used to never read articles about myself because it was just emotionally draining. I’ll shy away from interviews. Unless I’m talking about the book or something really important to me, I’m just not going to give you clickbait.” 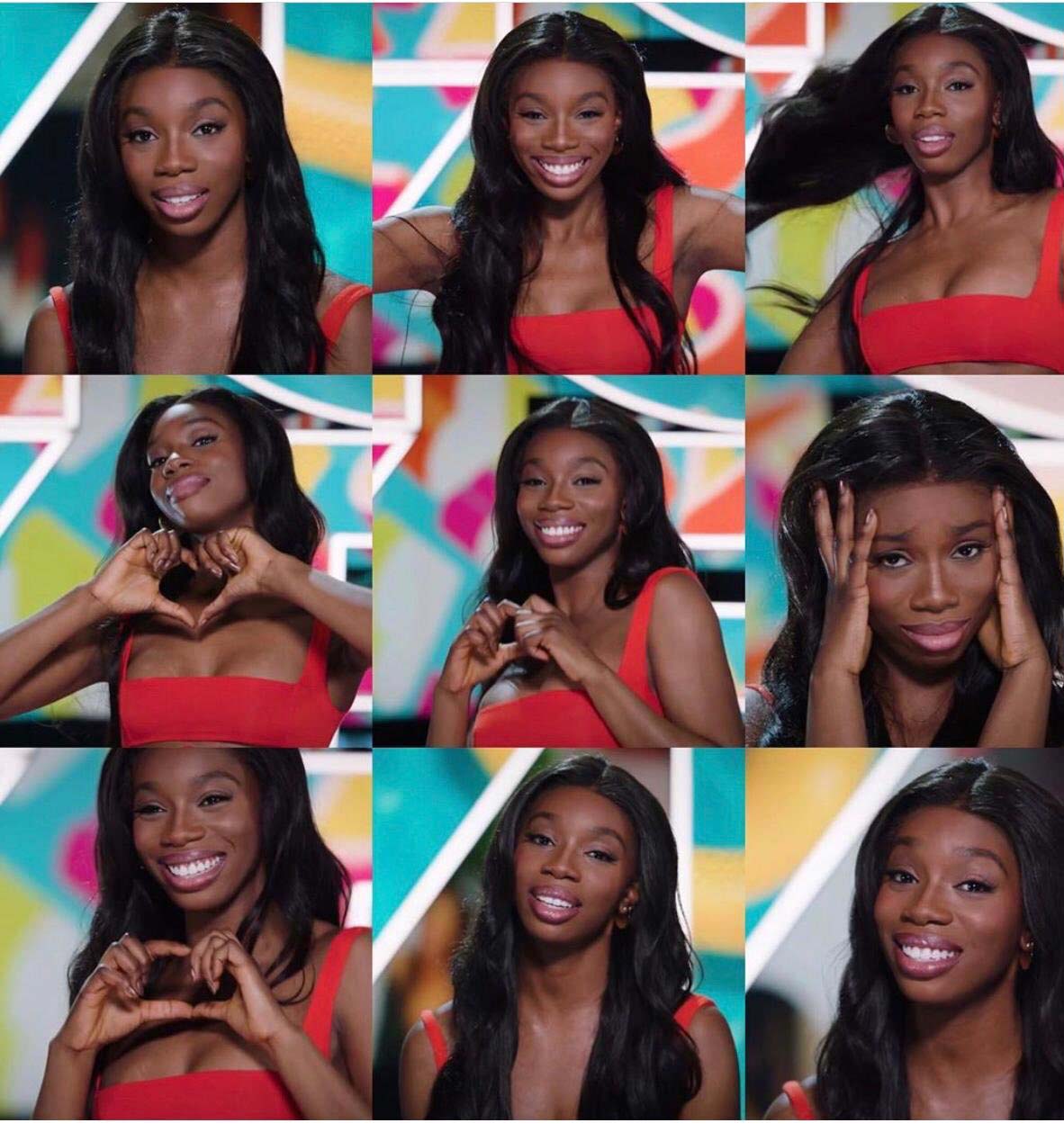 “At the moment, people in marketing, fashion, PR or beauty assume that whiteness sells. It’s the most palatable to their audience. Because of that, they’re always going to go for the white, blonde, blue eyes in terms of deals. Those people who work in marketing are also predominantly white.

“Until we have Black people in those senior executive roles and PR spheres, we’ll keep having those issues. Instagram feminism and the body positivity movement is so whitewashed.”

One part of Reclaiming touches on the ‘beauty’ fad of bleaching one’s skin to achieve a lighter tone. The racism experienced by darker-skinned women is well documented, yet documentaries on colourism have often been presented by mixed race individuals or lighter-skinned women, Biala notes in the book.

“Colourism is my longest chapter because there’s so many conversations to be had, but skin bleaching was one I wanted to touch on,” she says. “Presenting a show as a Black woman is often centred around Black trauma, and I wanted Black joy to be the focus too. It’s great for representation to see a Black woman talk about colourism from her perspective, but there’s a lot of people who have been denied those opportunities.”

Biala has been open about the impact of mental health on her life.

“Anytime I read certain paragraphs or pages, I’d just ball my eyes out,” she says. “It felt like reliving old wounds and trauma. You tell yourself that you’re fine, but you’re not really. Writing it was hard because you had to go back to these moments. I wrote it like diary entries from when my mental health issues started all the way to the end, when I was sitting in a therapist’s office.

“That was one of the hardest chapters. For anyone struggling, I recommend speaking to someone who can help. If you really want to speak to a Black therapist, you can find one, even over Zoom. There’s this relatability factor that you can’t get with a white therapist. They know where you’re coming from because they might have had those experiences themselves.”

Reclaiming also touches on police brutality. While Ireland has not been under the same spotlight as the UK and US, An Garda Siochana is by no means perfect. Statistics showing anti-Traveller bias in particular was released in 2021, but the Irish Network Against Racism has continuously called out the Gardai for its handling of the horrific George Nkencho killing in 2020.

“I was in London, at a train station and found out on Twitter,” Yewande reflects. “I actually knew George Nkencho growing up, our families are in the same church. We used to hang out together. It was so shocking to find out that way, and then to find out how he died. The video was just horrendous. There is so much racism in Ireland, but it’s not as overtly aggressive here without guns, so people shy away from speaking about it.

“This was a representation of racism at our doorstep, and the way it was handled was awful. An Garda Siochána brought out a statement and denied race being a factor in the police force, and it’s like, who decided that?”

Minister for Justice Helen McEntee confirmed this month that 228 people have died in or following Garda custody since 2007, with no cause of death released by case.

“Loads of people don’t see it up close in Ireland, so they don’t believe in police brutality here,” she adds, exasperatedly. “That’s the mindset they’ve adopted.”

All in all, what are Biala’s hopes for the path Reclaiming will take?

“I’d be content just knowing that it changed even one person in a positive way - be it that they were educated on an important subject or their personal experiences finally felt seen,” says Yewande. “That’s enough for any author to ask for.”

• Reclaiming: Essays On Finding Yourself, One Step At A Time is out now via Coronet. 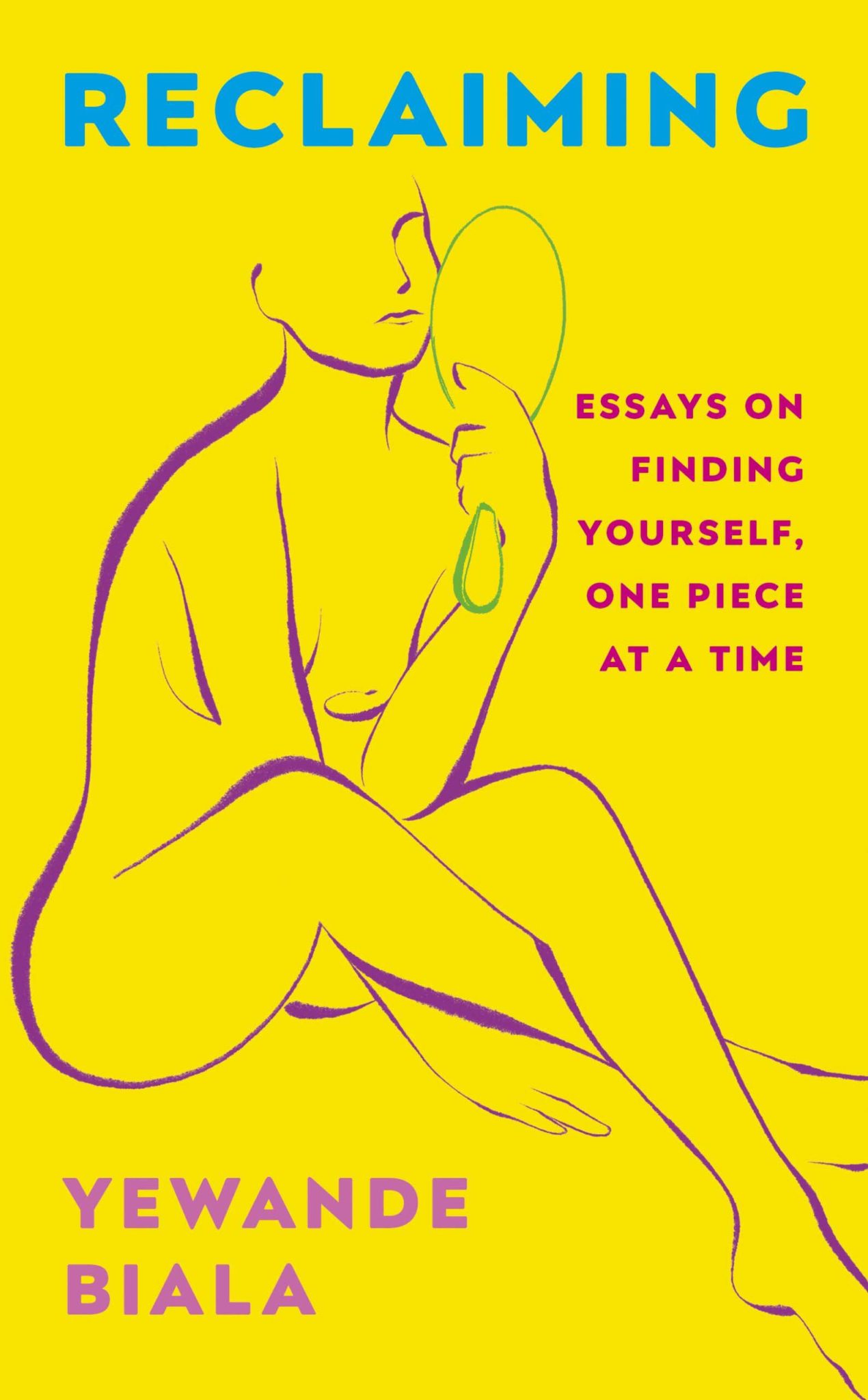 Late-night DART and commuter services begin this weekend
Review: "Grounded does for back gardens what Jaws did for oceans
Research shows young Irish generations willing to make sacrifices to help climate