The knock on impacts of a shock decision will reverberate for years to come!

Social media has been set ablaze over the weekend with shock waves reverberating around the world – for those who missed it - in the final second of the game a Canadian player went to ground in the ‘circle’ or penalty zone. So far the only twitter account seen supporting the penalty stroke being awarded by the video umpire, is run by an ex-international umpire… from Canada! 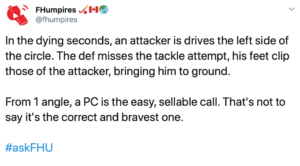 With the governing body for Hockey, the FIH, declining to comment other than to say that the umpires decision is final.

The Canadian team used their final referral opportunity to appeal for a ‘penalty’ review after the final whistle in the game had sounded. The video umpire, who had no prior experience, reviewed the final play and decided that a penalty ‘stroke’ should be awarded… virtually gifting the Canadians a drawn fixture and therefore the right to a penalty shoot out.

The Irish had already started to celebrate – after all the final whistle had been sounded, neither of the umpires on the pitch had seen anything malicious or deliberate in the dying seconds – when all eyes were on the players and the ball in the circle, and everyone knew that had a shot been taken – it didn’t have time to cross the line! The Canadians decided to chance their arm and appeal for a ‘penalty’ … presumably expecting a denial at worst, or a penalty corner at best. But Christmas came early for Canada and bizarrely the video umpire declared that a penalty stroke should be awarded.

A penalty stroke is awarded when a deliberate foul is committed within the penalty zone – ‘the circle’ OR where a foul in the circle by a defender prevents a what would otherwise would have been a definite goal.

The attacking player takes a one shot ‘flick’ or ‘push’ (not a hit) to try to beat the goalie from 6.4m away, directly in front of the goal.

So why all the shock?

Basically, the attacking player (Canada) had no time left to score and was shielding the ball, from the defender. The attacker stood on the defenders stick and fell over, as the ball travelled over the backline and out of play. The game was being watched around the world, and no-one watching could see a foul meriting a penalty corner, much less a foul which led to a certain goal-scoring opportunity in the form of a penalty stroke.

However, The video umpire bizarrely and inexplicably awarded the penalty stroke.

Irish captain David Harte tell's RTE "The real underlying factor behind is that the FIH appointed an umpire to make his first ever appearance as a video referral man (for this game). That is something we can't get our head around." "I had deemed that the rules and regulations stipulated by the FIH, that when it came to hosting two such important matches, you had to have a minimum of 12 cameras. Judging what was seen in Canada, there couldn't have been more than four cameras, which was mind-boggling, to be honest with you."

Still reeling from the shock of the penalty stroke which was scored (although the Irish Goalie, David Fitzgerald from Leinster and Monkstown) was centimetres away from saving, had been time or the ball wasn't going over the backline. The Irish men went 3-1 ahead in the shoot-out before eventually losing 4-3 in the sudden death phase. And that was it – all over… no chance to appeal, no opportunity for a replay or a re-match. Dreams shattered. Opportunities gone. The knock on impacts will reverberate for the next 8 – 10 years – loss of funding, no tournament play for 18 months, valuable ranking points lost, therefore making it harder to qualify for championships or Olympic qualifiers in the future.

Players who have put their careers/relationships on hold to achieve the dream will almost certainly retire; unlikely to stay playing for another 5 years to get to 2024 in Paris. 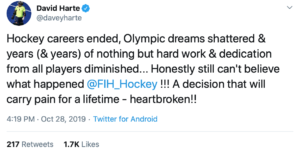 The Irish are no strangers to drama and the big occasions. The men lost out in 2012 when a goal was scored by Korea with 7 seconds left. The women lost out in a penalty shoot-out in 2015 to China. But this was a bitter pill – the game was won, the boys were on their way, they were celebrating … and then had to pull themselves back into a numbing shoot-out which they knew in their hearts was a travesty, an injustice.

The dream has come true! Ireland set for the Tokyo Olympics!
Irish Women to play Canada in Hockey Olympic Qualifiers!
Hot Flavours 2019: Food and Drink Tips For The Fortnight

Covid-19: Chief Medical Officer examining school reopenings in other countries
Cook Up A Storm online fundraiser launched in aid of the Dublin Rape Crisis Centre
Minneapolis protests call for justice for George Floyd
Irish pub capacity could be slashed to 12.5% of pre-Covid levels
The Whole Hog: COVID-19 Invades Our Meat Factories
Sustainable Fashion: Where to Start
We use cookies to ensure you get the best experience on our web site - by using this web site you consent to our use of cookies. Read more »