Man arrested for murder of 87-year-old Clare man in London
Mr O'Halloran was well known in the area for busking outside Greenford station.

Thomas O'Halloran, originally form Ennistymon in Clare, was brutally attacked and killed while on his way to busk near his home in west London.

A 44-year-old man has been arrested in connection with the murder of 87-year-old Thomas O'Halloran on Tuesday, August 16, in west London.

Mr O'Halloran, originally from Ennistymon in Co Clare, lived in the Greenford area of west London and used a mobility scooter to get around.

The Metropolitan Police have said that a man was arrested at an address in Southall, west London, in the early hours of this morning.

Leading the investigation, Detective Chief Inspector Jim Eastwood said: "I would like to thank the public for their overwhelming support following this horrific incident. As a result of the release of a CCTV image yesterday, an arrest has been made and this investigation is progressing at pace.

"Mr O'Halloran's family have been updated with this development and continue to be supported by specially trained officers."

According to an unidentified friend, the Clare native was attacked while on his way to busk.

Chief Superintendent Wilson told the PA news agency: "He was coming back from Perivale to play his accordion and make some money for his family and he was stabbed to death."

Police officers were called to Cayton Road, in Greenford, west London, to reports of a stabbing, with Mr O'Halloran declared dead at the scene.

It is believed Mr O'Halloran was stabbed at 4pm approximately in Western Avenue before travelling around 70 metres on his mobility scooter to Runnymede Gardens, where he asked a member of the public for help.

Thomas was apparently known locally for busking outside Greenford Station and was also said to be raising money for Ukraine. A newsagents worker said: "He used to play his accordion here. He came every day for a long time, at least two years. He usually busked around five o'clock."

Former Labour MP for Ealing North Steve Pound described Mr O'Halloran as "the uncrowned king of Greenford", adding that "his mobility scooter was like his throne." 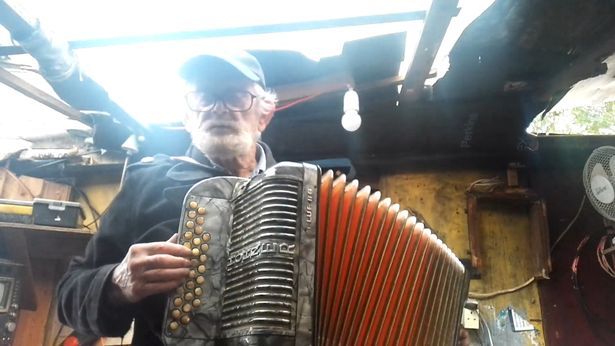 Mr O'Halloran was well known in the area for busking outside the Greenford train station.

Mr Pound spoke to RTÉ's Morning Ireland, saying: "He was so much an integral part of our community. He was almost like the hub around which all of Greenford revolved and circulated, because he was always there holding court outside the café opposite Tesco in Greenford, or playing his accordion and not playing, probably, the finest version of Danny Boy I've ever heard in my life, but an instantly recognisable version of it."

"He was always looking to raise money," Mr Pound added, "In fact, God rest his soul, when he was brutally killed he was actually raising money for Ukraine.

"We have a campaign here, in Ealing, for refugees arriving from Ukraine, but the great thing about him (was) he was an absolute character. In some ways, he almost played up to that sort of cheerful Irish stereotype."

Thomas is survived by his brothers George and Richard, and sister Bridget, as well as many nieces and nephews, still living in his west Clare birthplace.