Everybody loves Queen. Even people who claim they don’t like them secretly do, for all are powerless to resist the charms of one of their gigantic choruses. Put on their Greatest Hits – the one that has sold about seventeen gazillion copies - in any gathering and watch as people lose all reason, stick their fists in the air, and loudly agree that Fat Bottomed Girls do indeed make the rockin’ world go round, Yeah. There’s plenty of room in the world for the po-faced seriousness of the likes of Radiohead or whoever but rock n’ roll is supposed to be loud and garish and flamboyant and over the top and, most of all, fun, and nobody embodied that more than Queen, and no one in Queen looked like they were having more fun than Mr Freddie Mercury.

That being said, music fans should always be wary of the biopic. For every success like Ray, there are at least ten disasters like the god-awful Greetings From Tim Buckley. Added to that, this movie has had a troubled production. Sasha Baron Cohen had been attached to star but dropped out when it was proposed that Freddie’s death take place half way through the movie, and director Bryan Singer was fired for apparent “unprofessional behaviour”. So perhaps we should be grateful there’s a movie at all and more surprising still, that it’s a pretty damn good one.

A quick synopsis: Young Farrokh Bulsara dreams of making it big. He hooks up with Brian May and Roger Taylor of Smile after their lead singer quits. They make an album, get a manager, play Top Of The Pops and they’re off to the races, if you’ll excuse the pun. They record ‘Bohemian Rhapsody’ and the world falls at their feet. Freddie accepts his homosexuality, drifts away from the band, takes a big cheque to make some lousy solo records but is reconciled with them just in time for their triumphant victory at Live Aid. There’s your movie, and don’t go crying “plot spoiler!” for my next door neighbour’s cat could have told you all that. 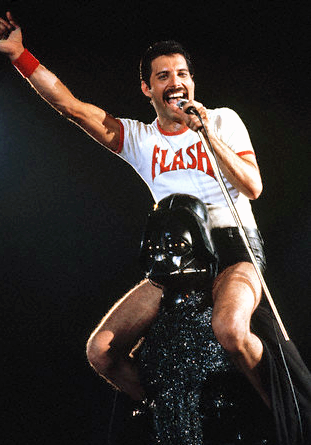 The Greatest Photo Ever Taken

There are a few problems with it, of course. For one thing, it does skip ahead a bit too quickly at times. My companion, Ms Kane, excused herself to the ladies room early in the screening. When she left the room Queen had barely formed and when she returned just a few minutes later, they were already selling out arenas. Mercury’s AIDS diagnosis is used as a way to add extra meaning to the Live Aid finale, but, according to Mercury’s partner Jim Hutton, he was only made aware of his infection in 1987, two years after the show. There’s only room for two women in the movie, Freddie’s mother and his girlfriend, of sorts, Mary Austin, who points out to our hero that which was obvious to everyone, including that aforementioned cat: he’s gay.  Other critics have pointed to the treatment of Mercury’s homosexuality as the movie’s deepest flaw, that his spiral into loneliness and drug dependancy came about because of this, which is, of course, bollocks. There are plenty of lonely drug taking straight people in the world too. All of these flaws, and they are there, can be perhaps be explained away by the simple fact that this is a movie, and a 12A rated one at that. If you’re looking for an in-depth story of Queen, then look no further than the excellent Queen: Days of Our Lives documentary from 2011, but if you’re after some over the top entertainment, then Bohemian Rhapsody is just the ticket.

As it’s 12A we sadly do not get the infamous party at the New Orleans Fairmont Hotel from 1977 with the naked  waiters/waitresses and the dwarfs with bowls of cocaine on their heads. Nor do we get the the marketing stunt to launch ‘Fat Bottomed Girls’ which was exactly what your guessing it was. We do however get the recording of ‘Bohemian Rhapsody’ as Mercury’s operatic fantasy is brought to life, much to the chagrin of record company exec Ray Foster, played by an unrecognisable Mike Myers. And, in fairness, how could he not doubt the commercial potential of six minutes of “Galileo Figaro Magnifico”? History would prove him very, very wrong of course. And we get the band absolutely walking away with Live Aid - one of the greatest performances in the history of rock n' roll.

There’s a heavy Irish presence too – Aidan Gillen plays their seventies manager John Reid, a man who managed Elton John for nearly thirty years so knew a thing or two about flamboyant Queens, Allen Leech portrays Paul Prenter, the villain of the piece who is blamed with leading our Fred astray, and Aaron McCusker is Jim Hutton, the Carlow man who was Freddie’s partner up until his death in 1991. They’re all good, but the acting honours must go to Rami Malek in the title roll. He’s fantastic throughout but it is during that Live Aid performance – recreated here in almost it’s entirety – that you start to appreciate all the Oscar whispers. Every move and gesture is replicated, he simply is Mercury.

But let’s go back to the start, the greatest asset the film has is the immortal music. ‘Another One Bites The Dust’, ‘Keep Yourself Alive’, ‘Somebody To Love’, ‘Hammer To Fall’ – if you’re not nodding and smiling just reading those titles, then there’s little hope for you. This is a movie for fans, if you don’t like Queen (although remember, you probably secretly do) then don’t go.

If you’re after a movie with life changing wisdom then this isn’t it, but if you want something that’s funny – there are riffs on Roger Taylor’s ‘I’m In Love With My Car’ and few digs at retired bassist John Deacon (history is written by those who stay around) - and touching – there was a tear in Hot Press’ eye by the end – then this is for you.

Lastly, and this is perhaps the most important thing to consider when judging a movie about rock music, it rocks like a bastard.

"If somebody comes up with a genius plan": Queen's Roger Taylor on a possible Bohemian Rhapsody sequel
Queen announce that they will perform at the Oscars
Netflix announces Agent Elvis cartoon with Matthew McConaughey

Netflix’s Scoop has found its stars for the upcoming drama
Wild Youth react to being selected as Ireland's Eurovision entry: "It's been such an emotional journey up to that day, so much I broke down in tears after"
Conor McPherson's Girl From The North Country to get film adaptation – featuring Olivia Colman, Woody Harrelson and Chlöe Bailey
Fatboy Slim documentary, featuring involvement from Dublin's Windmill Lane Pictures, to premiere this weekend
The Last Of Us: A compelling and often exhilarating apocalyptic thriller
5 Reasons To Watch M. Night Shyamalan’s Knock At The Cabin