Taylor Swift: Grammy nomination for Song of the Year is "momentous and surreal"
Emily Greenberg

The 2023 Grammy nominations were announced yesterday, and Taylor Swift's Red (Taylor's Version) earned her a few.

'All Too Well (1o Minute version) (Taylor's Version)' was nominated for song of the year, an award that Swift has yet to win.

She wrote on her Instagram story, "So many reasons to lose my damn mind today but... All Too Well 10 is the song I'm the most proud of, out of anything I've written. The fact that it's nominated for Song of the Year at the Grammys, an award I've never won, that honours the songwriting... it's momentous and surreal."

She went on to recognise her co-writer Liz Rose, who began writing the song with Swift when she was just 14 years old. She also thanked her fans, saying "this wouldn't have happened without you." 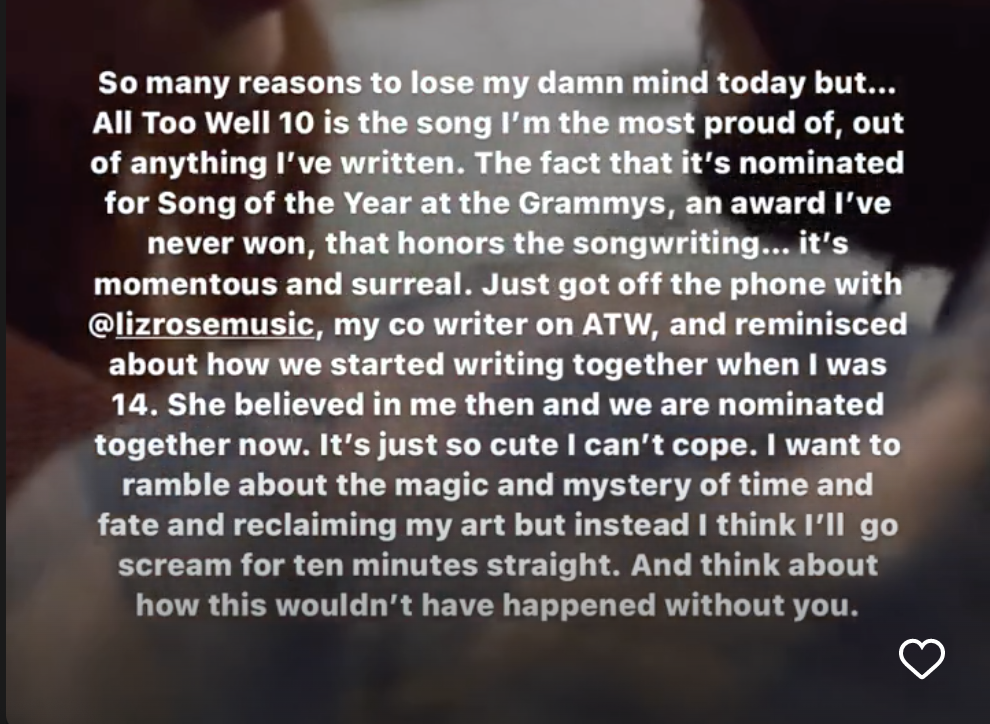 Swift's other nominations are as follows: Best Country Song- 'I Bet You Think About Me (Taylor's Version) (From the Vault)'; Best Song Written for Visual Media - 'Carolina', from Where the Crawdads Sing; and Best Music Video- All Too Well: The Short Film starring Sadie Sink and Dylan O'Brien.

Midnights, Swift's newest album, was released just one month too late to be considered for the 2023 Grammys, but will have its chance in 2024.

Swift already took home a number of awards at the 2022 EMAs this past weekend. She earned best video and best long-form video award for All Too Well, as well as best artist and best pop.

The record-breaking artist also took home the Video of the Year, Best Longform Video, and Best Direction awards for All Too Well at the VMAs in August.

Taylor Swift shares re-recorded version of 1989's 'This Love'
U2's Bono to be awarded Fulbright Prize for International Understanding at ceremony later this month
Jake Gyllenhaal shrugs off Taylor Swift's 'All Too Well': "It has nothing to do with me"