A first in Irish music - they're saying, and they're a big gang, so we won't argue - "trad fusionistas" Kíla will be joined onstage by an 8 piece brass band for a defiant celebration of music and culture in the face of ongoing the Covid pandemic.

It will be live streamed for the bargain price of €0 on the band's FaceBook page from The Glens Centre in Cluainín/Manorhamilton in Leitrim on New Year's eve from 10.45pm - 12.15am.

Trombonist Paul Frost will be scoring the parts - this reminds me of Allen Toussaint working with The Band's Rock Of Ages album - and, in a who's who of the brass world, will be joined onstage by Ritchie Buckley (sax), Ciarán Wilde (clarinette, sax), Cathal Roache (baritone sax), Ray Martin (trumpet), Colm Byrne (trumpet) Eoin Kelly (trombone), Gavin Waren (sousaphone), Paul Frost (bass trombone). You'd think one of them could have been called Michael or something similar, so I could shoehorn in an auld "where there's Mick, there's brass" gag. Thanks for nothing, lads.

If you're unfortunate enough to have never experienced these headers live then a) what the hell have you been doing?, b) oh yeah, right, and c) here's your chance, and it's not like you've anywhere else to be going. Here's a recounting of just how good they are. Never mind yer man on the telly with the piano; see you 'down the front'. 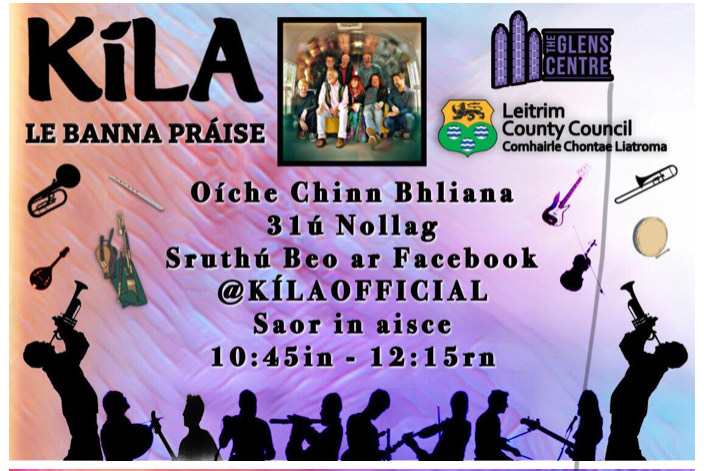 Tara Kumar shocks RTÉ 2FM fans with news of her departure
Beyond the Pale announces summer 2023 return with headliners Hot Chip
Strange Boy on Fómhar in Fanore, Irish mini festival in Co. Clare: "There’ll be something there for everyone"

Tau & The Drones of Praise collaborate with Damien Dempsey and Pól Brennan on new single 'Ceol Ón Chré'
Bono opens up about death of his mother in new extract from upcoming memoir
Register now for Minding Creative Minds' September meet & greet session
Liam Neeson's poetic reading of Patrick Kavanagh's work releases ahead of Almost Everything…
Junior Brother: "I’m more bold and difficult in my music than I am as a person"
Event celebrating Irish writer Mary Lavin to feature Steve Wickham, Catherine Byrne and more