Inspiring Women in Fashion from BBC's 100 Women of 2018 list
By: Amy McMahon

Meet the most influential women of 2018 from the fashion industry, all encouraging women in various ways.

The BBC have compiled a list of 100 inspiring and influential women from around the world for 2018. A diverse group with ages ranging from 15 to 94 and from 60 different countries.

The list is in alphabetical order as a way to celebrate these brilliant women without ranking them in any way. A refreshing take.

Model turned activist Svetlana promotes body confidence. The 18-year-old survived a fire that burned almost half her body and rather focus on the negatives, she works to help people with scars feel positive about their bodies.

Judith is the co-founder of Giggle Knickers, a company which makes special underwear for women who suffer from urinary incontinence. They provide all sorts of underwear options from thongs to full briefs.

Barbara established BehindBras, a company that specializes in giving female prison leavers skills to start careers in the fashion industry. Barbara found inspiration for her business when she too was behind bars in her late 50s.

Best-selling author and activist Chidera encouraged new conversations surrounding women's bodies. The inspiring 23-year-old was the mastermind behind the social media movement #saggyboobsmatter, which now has nearly 9k posts on Instagram, and 185k on her own account.

Thando is a diversity and inclusion advocate. She became the first person of colour in South Africa to be featured in the Pirelli calender in 2018.

The Good Place actress Jameela began the #IWeigh movement encouraging women to focus on their positive attributes that make them who they are, not a number on a scale. The @I_Weigh Instagram account has 209k followers, creating an empowering community. Below is the photo that started the movement, which Jameela posted to her Instagram story and blog. 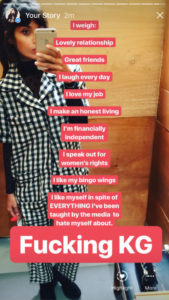 Presenter and Model Joey and her partner Angelina Mead King appeared in a documentary which followed the couple's journey when Angelina came out as transgender.

Maral is challenging stereotypes head on while travelling the world on her motorbike, battling Iran's ban on women riding motorbikes in public.

'Derry Girls' creator named one of the 100 most influential women in the world
Hudson Taylor begin their 2020 album campaign with 'What Do You Mean?'
Poet James McCabe to give lecture on William Butler Yeats

Waves' Kelvin Harrison Jr: "So much of the Black experience, especially in America, has been about trying to catch up and trying to prove that we are worthy"
Happy Out release debut EP 'Is,was,wasn't'
Netflix unveils first trailer for 'The Stranger'
'Late Late Show' line-up revealed, Hermitage Green to guest
Hot Press spoke to the head of Dublin's new 'narco terrorism' task force, Jack Nolan, in 2018
Disappointment after Thin Lizzy fail to make Class of 2020 at Rock & Roll Hall of Fame
We use cookies to ensure you get the best experience on our web site - by using this web site you consent to our use of cookies. Read more »