Youth climate activists to voters: "We may not be able to vote tomorrow, but we will in the next election. And we are watching"
Pre-election Climate Strike at the Statue of William Conyngham Plunkett, Kildare Street. Friday 7th of February 2020. Copyright Miguel Ruiz.

Hundreds of youth climate activists rallied at Kildare Square this afternoon to amplify their message to vote climate in tomorrow's election.

Hundreds of youth climate activists gathered in Kildare Square this afternoon in a strike to call attention to the climate crisis ahead of tomorrow's election. Though many of them were too young to vote, their message was steadfast.

“We may not be able to vote tomorrow, but we will in the next election. And we are watching,” proclaimed Beth Doherty, one of the youth organisers leading the Dublin strike. "“Nothing this big will ever be easy. But you know what will be more difficult? Living with the effects if the climate crisis." 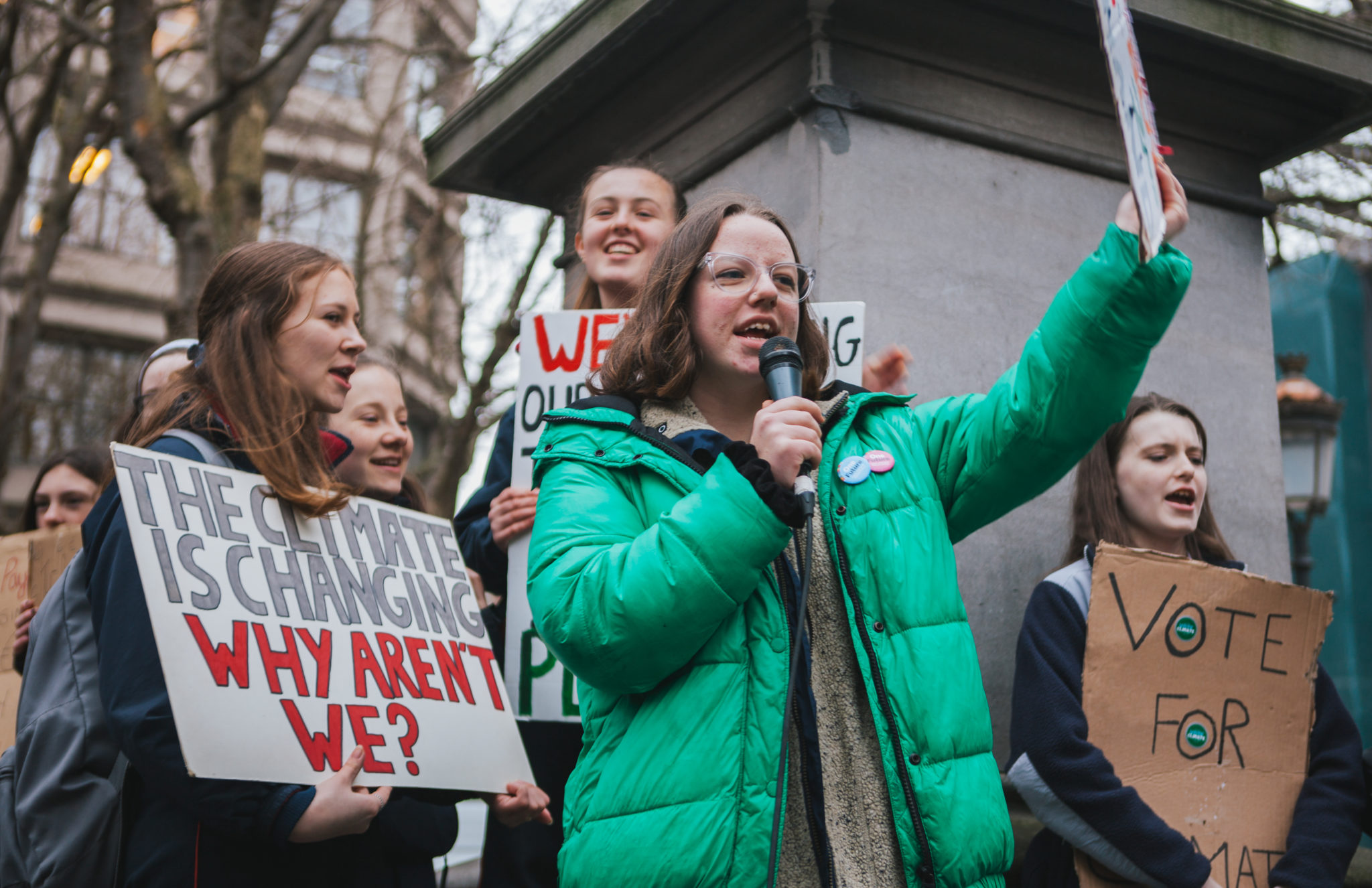 16-year-old Evan Pereira delivered a rousing speech, urging everyone in attendance, regardless of their voting status, to get engaged in politics. “Keep Fianna Fáil and Fine Gael out,” he admonished, as the crowd thundered in agreement. “All we can do is take them on head on. Get engaged. Take them on because they need to be held accountable. Not just on election day but every day, day in, day out.”

Fellow striker, Harvey, mirrored Pereira's sentiments against the establishment parties. “Mr Varadkar, you failed miserably at your job,” he scolded.

Numerous activists chose to share their sentiments artistically, through posters and poetry.

Sisters Anwyn and Olivia Wilkinson, 5 and 8 years old respectively, were attending their third strike since the record-breaking global strike in September that drew up to 30,000 people in Dublin, and millions across the world. For Olivia, it was her second strike this week.

"She's very much wanting to do something," explained her mother. The two sisters created their own posters, with Olivia's featuring the popular strike chant, "There is no planet B." 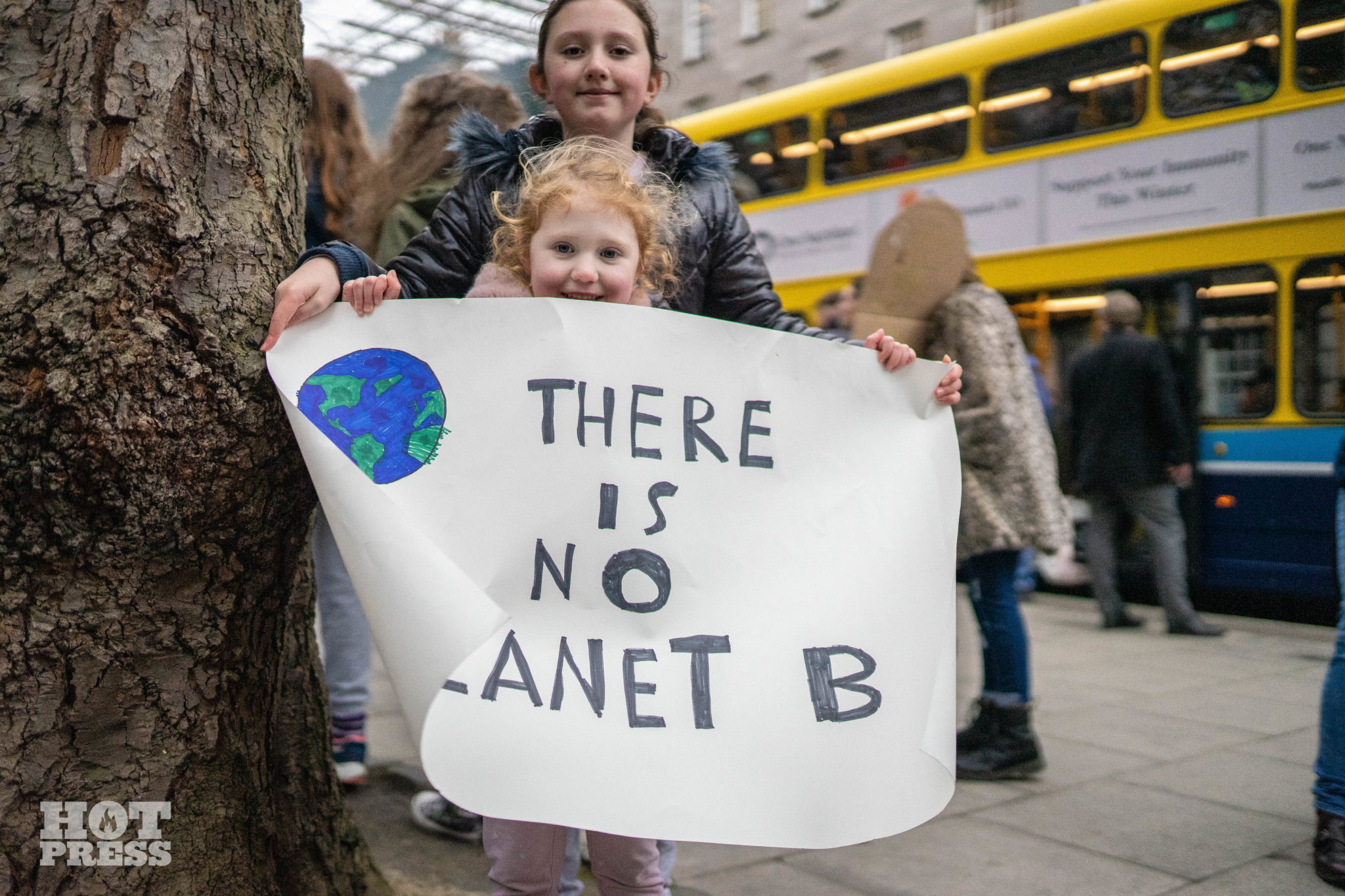 Lucy Holmes took the microphone atop the Statue of William Conyngham Plunkett to share a poem she wrote, called 'Complacency.' Her moving delivery, at times nearly in tears, and at others emoting an immeasurable fury with the system, concluded in one chilling line: “The doomsday clock is ticking down. Our complacency will kill.” 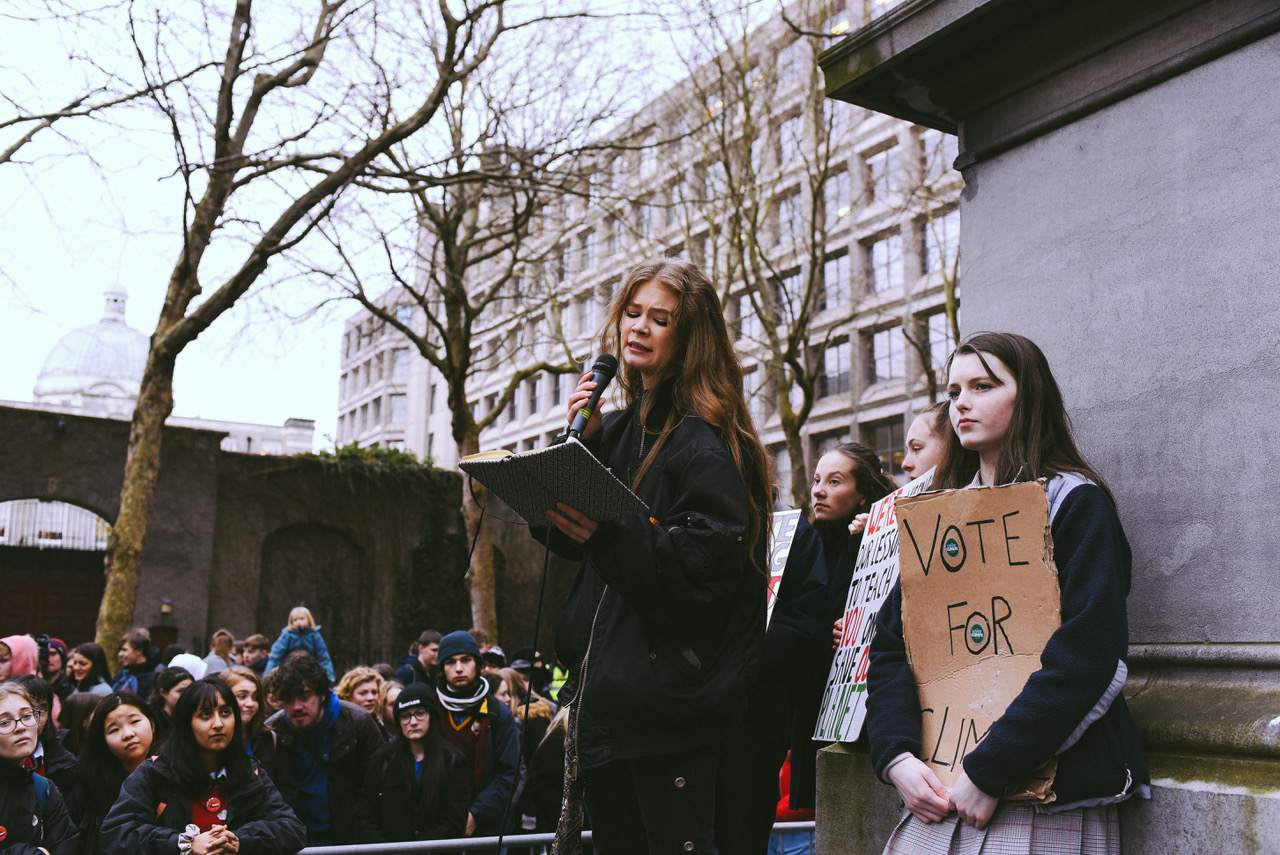 The strike, part of an ongoing weekly protest of young people concerned with the government's handling of the climate crisis, was expected to draw larger than normal crowds as it landed the day before the election. Initially expected to be in the thousands, the event drew closer to 500, presumably in part due to fears of repercussions from an Garda Síochána.

In a press release posted to the Fridays For Future Dublin Instagram page on Wednesday, the group claimed, "an Garda Síochána have refused to support our protest on the grounds of the age profile of our participants, allegations of previous behaviours, and have gone so far as to add threats of criminality for what is peaceful protest." 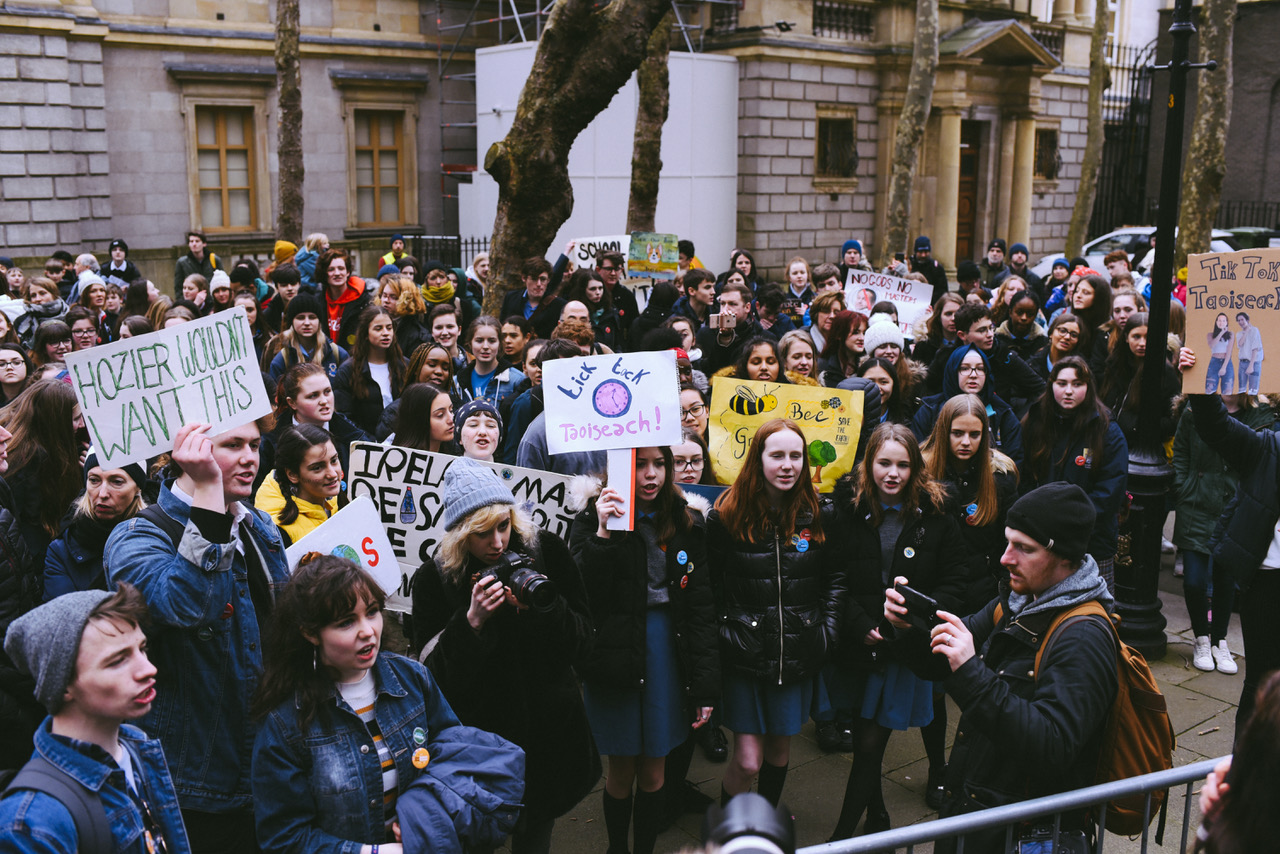 The group also posted a series of five emails they exchanged with the Pearse Street Garda Station, with individual names redacted. The alleged Gardaí email cited, "the level of risk, the age dynamics of the group, the unwillingness of the Teachers to co-operate, [and] the lack of trained stewards" as reasons why they refused to facilitate the protest.

Due to concerns about the lack of Garda support, Fridays for Future assured potential strikers that they had consulted with the Irish Council for Civil Liberties to confirm that it was within their rights to carry on with the strike.

Legality was far from the minds of those in attendance though. "We're here because of a lack of action that has given us no other choice," said Fridays For Future Dublin's Beth Doherty. "That changes tomorrow."

Kanye West partners with L.A. charities to tackle homelessness
The Message: Striving for 2020 Vision
Musicians on the General Election: RuthAnne – "I don't trust any of the parties in Ireland anymore"

General Election to be held on February 8th
"It's your moral obligation to speak out" – Congressman Jim McGovern on impeachment, guns, and the border
John Lennon's childhood home sold at auction for €312,000
New project facilitates dialogue between young Black adults and Gardaí in Blanchardstown
Catherine Martin secures funding for media scheme, artist spaces and Night-Time Economy
KNEECAP: "The only thing to do is take the piss – because if you don’t laugh, you’d be crying your eyes out"