“From the awful situation, there was one positive. My dad getting sick saved his brother’s life.”

By 2023, Movember aims to reduce the number of men dying prematurely by 25%. The ambitious goal is a testament to the incredible achievements of the NGO, which was started in Melbourne nearly 20 years ago. What began as a bit of fun amongst friends to fundraise for men’s health has expanded into a worldwide movement to help fathers, partners, brothers and peers. We can’t afford to stay silent anymore.

Movember, as the leading charity enacting change, has now funded over 1,250 mental health projects since 2003. That doesn’t even touch on the €500 million raised and five million Mo Bros and Mo Sisters who have signed up over the years.

From suicide prevention initiatives and research for testicular and prostate cancer to awareness campaigns on emotional wellbeing of men; Movember refuses to give up on its mission to offer happier, healthier and longer lives.

Hot Press sat down for a chat with two Movember Ireland campaigners, Kev Sharkey and Seán O’Hara. Both men have differing yet equally moving reasons for joining the mustachioed enjoyment in 2021.

“I started taking part on my own at first,” Kev says. “My Dad died six years ago in March of prostate cancer. As a little tribute, I decided to grow a moustache. I wanted to make people aware that this form of cancer is very treatable if it’s caught in time. That was the most important thing to me — to push that message on.

“If you get checked on a regular basis, your chance of getting prostate cancer drastically reduces,” he continues. “My dad was too far gone by the time his cancer was caught. This is my sixth year doing Movember, but my team has now grown. There were six of us during the second year, but we’re up to about 17 now. We’ve all been growing our beards since September so we can do silly moustaches throughout the month.”

“He had his first heart attack at 49 and subsequently had a double and a triple bypass. He had a stent put in as well. Around the same time, he got diagnosed with haemochromatosis and diabetes - a laundry list of stuff. He didn’t really look after himself — I can’t lie. When he had his operation, the doctors reckoned he wasn’t going to live long but himself and my mum moved to Greece for eight years. One week, he was struggling to go to the loo. He went to one of the clinics on the island and it turned out his PSA levels were through the roof. They came back from Greece to Ireland that October to get seen. It wasn’t confirmed until January that it was prostate cancer. He was too far gone for treatment, so he was given palliative care.”

When Sharkey reminisces about the next three years, his gratitude for the precious memories shared before his father’s death radiates outwards.

“We had chats with him in person multiple times a week. I’m thankful for the time I had with him — what I had, as opposed to what I lost. My dad has five brothers and a sister — and one of the brothers went and got his prostate checked. He found out that he had prostate cancer too and it was treated successfully. From the bad situation I was in, there was one positive. My dad getting sick saved someone else.”

Prostate cancer is the second most common cancer in men globally, with more than 1.3 million men diagnosed with it every year. Across Ireland, more than 30,500 men are living with – and beyond – this disease. As for testicular cancer, it remains the most common type of cancer affecting men aged 15-39.

Why does Kev resonate so deeply with the messaging behind Movember?

“I just feel that there are so many men out there that don’t get checked. They won’t talk to people. They stay within themselves,” Kev says, passionately. “It’s the mentality of a stoic 1950s man. A lot of boys can’t cry or even show emotion. What Movember does is give people a talking point – somewhere to start. Men need to see that they can get checked without judgement and express their worries and fears to an entire community around them safely. The visual impact is also immense, it makes me feel less alone. Seeing a moustache in November for me is very poignant.” 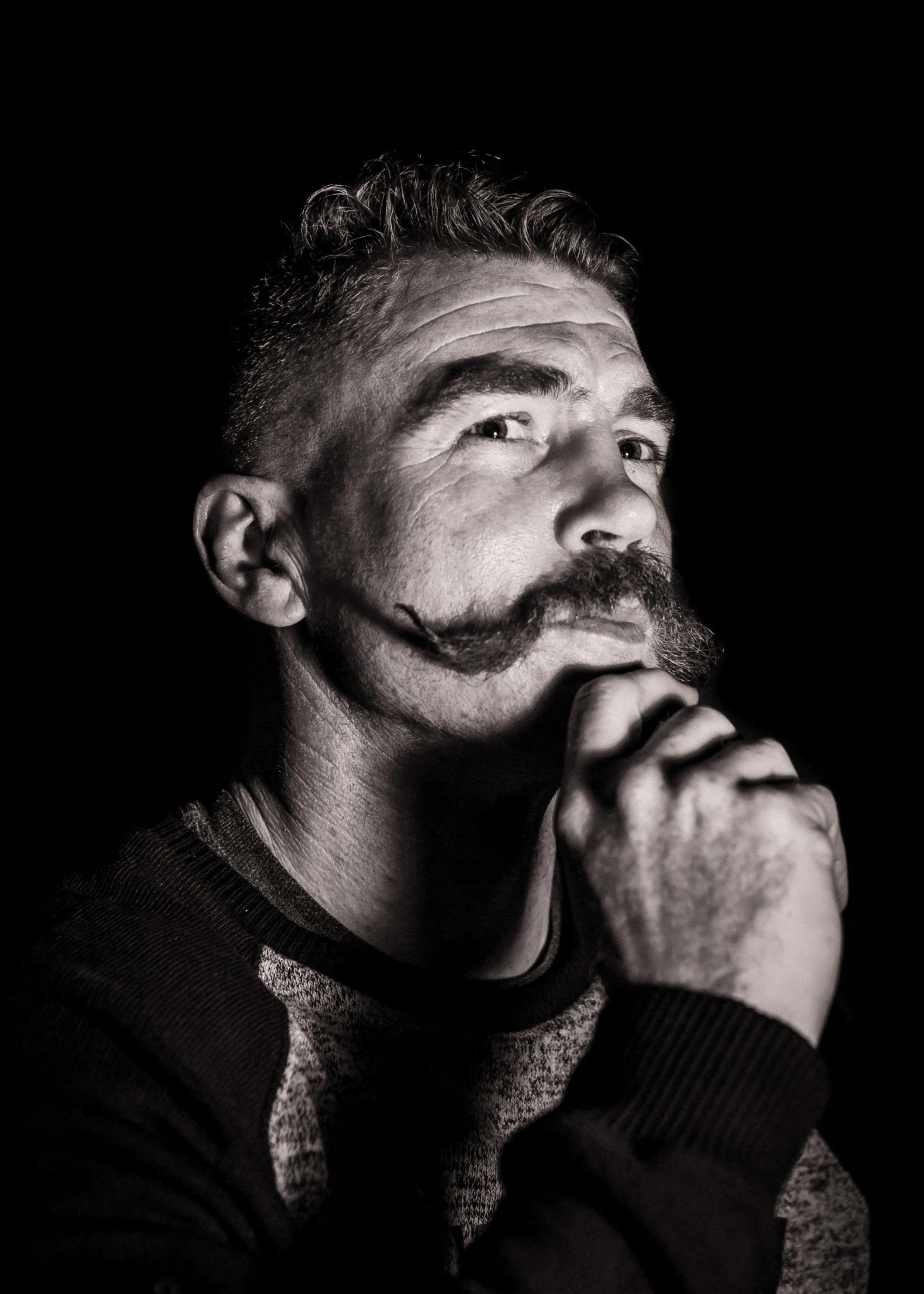 Seán O’Hara’s story recalls an alternative path: his journey with depression. The rate of male suicide is alarmingly high: approximately 3 in 4 suicides are men in Ireland. Approximately one man dies by suicide every minute of every day, but charities like Movember march on with their goal to dramatically change this. Seán’s empathy for fellow mental health sufferers made him the ideal Movember ambassador - simultaneously helping others while giving himself a purpose.

“I got involved with Movember in 2018 - I had a rough time the year before and discovered the charity through friends,” he recalls. “I also saw moustaches everywhere, so I couldn’t escape it! I gradually became more involved with every campaign. I’m bumping it up another notch in 2021.

“It’s only in the last number of years that Movember has come on board with male mental health. There’s still a massive stigma attached to people talking about this issue in general,” Seán insists. “The NGO does a great job of opening up those conversations. Just by growing a moustache, so many people will reach out to you. We’re definitely going in the right direction but I think the statistics speak for themselves. The numbers are shocking when it comes to male suicide rates. As young men grow up and have to deal with different circumstances in their lives, especially with social media, their mental health suffers in new ways. Having something like Movember allows boys to become more capable when it comes to dealing with their emotions. Men my age were rarely able to do the same.”

Movember’s mental health strategy takes an upstream approach, where it aims to reduce the number of men who need to avail of the existing crisis support services. This is largely based on prevention and early intervention, by opening up the conversation around men’s mental health, giving guys the tools to effectively support their friends who are going through a tough time and by addressing some of the key risk factors for men’s mental health. For many guys this is uncharted water – they’ve never had these conversations before. Movember up-skills guys with a roadmap to support their friends, navigating tough communicative moments.

As a younger man, Seán never had the language or tools to fully realise his illness.

“I dealt with quite a lot of anxiety and depression in my teenage years, but I didn’t realise what was happening. I had no clue what anxiety was and didn’t really pay much attention to my mental health. It was just something I shrugged off, because of that mindset: ‘What do I have to be depressed about?’.  In 2017 I started to face it a bit more. I only realised what was going on after hearing other people talk about their own experiences of panic disorders. It felt exactly like a heart attack.

“I went to a counsellor for the first time after that,” Seán recollects. “Talking about issues that I’d pushed away — unravelling all of that — brought back the same feelings again. I was overcome with depression and anxiety throughout 2017. The following April, I ended up being hospitalised in St. Pat’s University Hospital. I spent about a month and a half there. I came out a different person.

“I was better able to deal with stuff going on in my head. I built up my own toolbox of coping mechanisms that worked for me. That led to me getting involved in Movember. I had been in a position where I couldn’t talk to anyone about it or tell anyone about what was going on — I was afraid of the stigma that was there and thinking people would treat me differently or see me in a different light. Having come through that now, I feel passionate about opening up these conversations so other young boys and men potentially don’t have to struggle in the same way I did.” 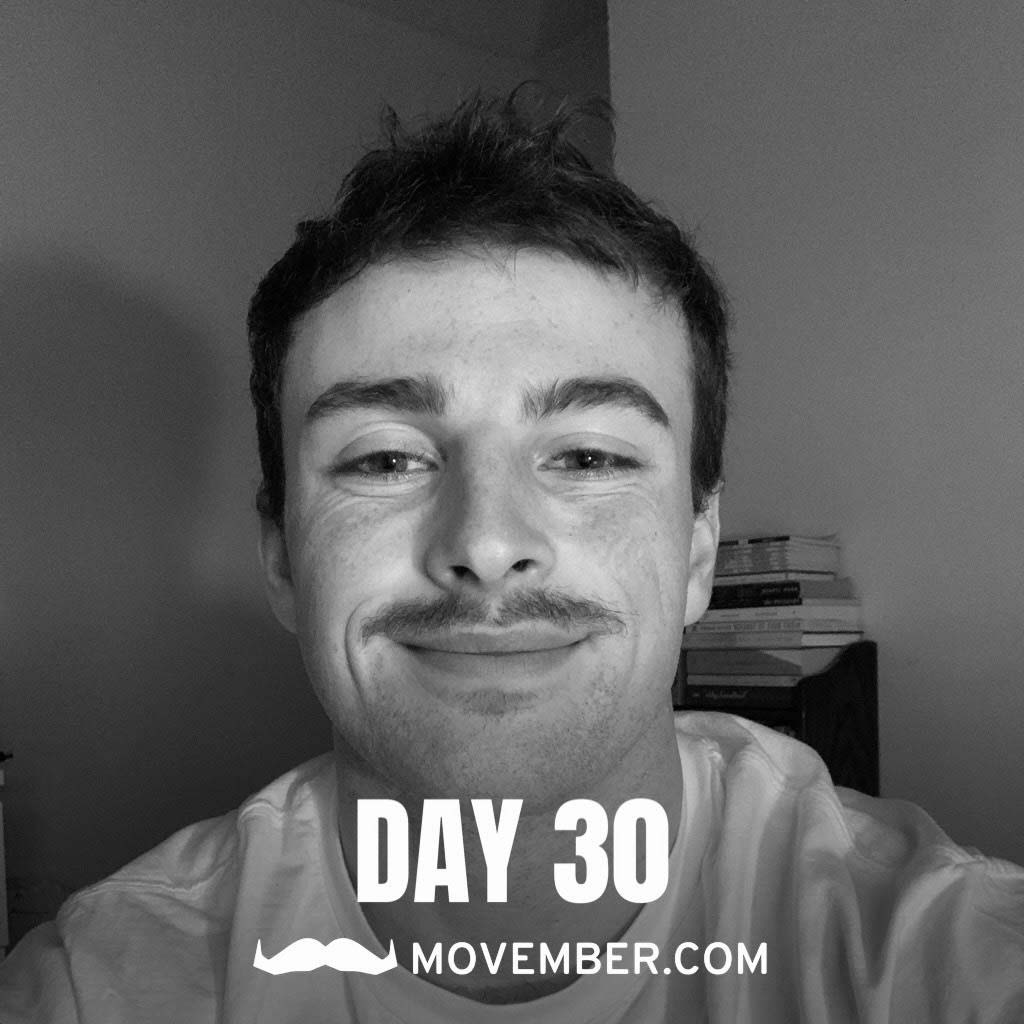 Sporting his own unique facial hair, O’Hara illustrates why the moustache is the perfect symbol for a growing movement.

“It catches your eye straight away. Globally, it’s become associated with Movember throughout the year. Everyone knows what you’re hoping to fundraise for as soon as they see your face. There’s also a great community aspect. You know you’re involved in something bigger just by having a physical attribute. Whether you can grow a great handlebar moustache or you have a little wispy Ronnie, everyone enjoys taking part. There’s no judgement or confidence issues with your ‘tache.”

The original Movember idea is that you grow a ‘tache – and raise funds for Movember by getting family, friends and anyone else you can reach out to, to sponsor that noble endeavour! Needless to say, the more dramatic or impressive the moustache the better.

Nowadays, there are many different ways you can join in the fun, under the headings Grow A Mo (your face will raise funds and awareness for men’s mental health), Move for Movember, Host A Mo-ment and Mo Your Own Way among them.

100 Voices #AllAgainstRacism: Yasmin Seky – "What can be done in the future? Educating younger people and teaching them something fundamental: that, really, we are all the same"
Just Mustard, Fears, Aoife Nessa Frances added to SXSW festival 2022 line-up
Kerry act Francie Conway shares 'Christmas Night' on 41st anniversary of John Lennon's death