Coldplay are booming from the kitchen stereo as Andy McFadden tends to the morning deliveries, the first of which to arrive is the whole lamb that the Glovers Alley supremo models in his Best Of Ireland photo-shoot.

“I’m a big fan of nose to tail eating, so we get in a whole lamb from Wicklow, a whole goat from Galway, a whole pig, a whole deer, which is pretty unique,” Andy enthuses. “We had a pig’s head left over the other day, so I came up with the idea of Roasted Scallops with a Pig’s Head Boudin and a little Balsamic Gel. Philly, my head chef, did this deep-fried coriander, carrot and onion to go with it and it was like, ‘Boom, pure flavour!’ We started after lunch and had it finished at six o’clock just before evening service. The sommeliers were freaked out a bit because they only had a few minutes to work out which wine to pair it with. It’s good to fly by the seat of your pants sometimes!

“The exception to the whole animal rule is our beef – you can’t bring a cow into a kitchen, so we’ve this guy from the North, Peter Hannan, who sends us these amazing cuts of beef in a Himalayan salt. We’re using his 70-day aged sirloin to do a Beef Tartare, the texture and aroma of which are out of this world! The fact that 95% of our beef is going to France, where they’re insanely picky, says it all.”

Glovers Alley is possibly unique locally in that they don’t roast any of their meats.

“If we’re cooking a fillet of lamb, goat or venison, we season it with table salt, roll it in egg whites and, in most cases, roll it again in breadcrumbs tangled up in garlic, parsley, rosemary and thyme,” the 32-year-old explains with evangelical zeal. “You put it in a pan, which has foaming oil and butter, and you keep turning it every minute. What you’re basically doing is creating your own mini-rotisserie.”

Am I the only one who’s suddenly feeling really hungry? One of the youngest chefs to ever bag himself a Michelin Star, McFadden has been putting in ninety hour weeks since taking over the third-floor Fitzwilliam Hotel space previously occupied by one of his culinary heroes, Kevin Thornton. While the Glovers Alley food, vibe and decor are very much Andy’s own, he shares his predecessor’s belief that dining out should be a feast for all the senses.

“I’m on a mission to bring back the boozy Friday lunch,” he smiles. “I love the idea of a group of friends coming in and enjoying the food with a couple of bottles of wine; having great chats and immersing themselves in the atmosphere of the room; gazing out on Stephen’s Green; seeing what’s going on in the kitchen through the hatch which we’ve retained from Thornton’s… and possibly having another bottle of wine! I’m with the Italians – meals shouldn’t be rushed. They should be an experience.”

One of Glovers Alley’s trademark dishes, Knockanore Smoked Cheddar Dumplings Dumplings with a Wholegrain Mustard Emulsion and Ham Hock, is the result of Andy’s own boozy lunch in nearby Grogan’s bar.

“We had the most amazing toastie there, so I thought, ‘Let’s do a riff on it!’ One of the joys of being back in Ireland is the cheese here. It changes all of the time, but we’ve currently got St. Killian, Cashel Blue and St. Tola in the restaurant. I go into Sheridan’s, which is just around the corner, every Saturday just for myself and have a good look around.”

Any other favourite off-duty haunts besides the aforementioned South Anne Street cheesemongers and Grogan’s?

“Kehoe’s next to Sheridan’s is another great trad pub, and my favourite Dublin restaurant is Forest & Marcy on Leeson Street. We did a lot of eating there before we opened Glovers Alley and pretty much every fish was remarkable.”

“I was struck by the fact that he was always there making breakfast,” Andy reflects. “Having been given the enormous privilege of having my name on the door, it should be me doing the heavy lifting. Neven’s had me on his TV show and I’ve done MasterChef Ireland twice, which is how I became friendly with Simon Delaney and Niamh Kavanagh who are both good enough to be professional cooks. 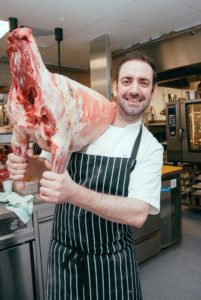 “Being from there, I’m very proud that I went to college in IT Tallaght, which meant I could walk in from home. I had 12 weeks at L’Ecrivain learning like crazy under Derry Clarke and then went to work in the Nuremore Hotel in Carrickmacross, which is a fabulous establishment. The head chef there at the time, Raymond McCardle, was obsessed with Gordon Ramsay and said, ‘You have to go and work for him in London’. Then he ate in Shane Osborn’s Pied à Terre in Fitzrovia and changed his mind: ‘Forget about Gordon, this is the guy who’s really going to teach you how to cook.’ I was a silly, naïve 20-year-old but that’s precisely what Shane, who’s become a father figure to me now, did.”