U2 Give Peace A Chance in Mumbai
By: Justin Nisly

To end The Joshua Tree tour, U2 took the show to India, performing their first ever gig in Mumbai. It turned out that India was ready – and then some!

In the days before U2 took the stage in Mumbai for their first India show, their presence was impossible to miss. News cameras followed their visit to Mahatma Gandhi’s historic home. The city chartered a ticket-holders-only train to the stadium. Bollywood stars and cricket legends walked the red carpet, while 40,000 fans – many in U2, Metallica or Iron Maiden t-shirts – lined up outside.

Expectations for U2 were high, but perhaps no band in the world works harder to give fans their money’s worth. The Mumbai show was the last stop of The Joshua Tree tour, and the generous setlist mirrored the band’s career: 5 early hits, the entire The Joshua Tree album, and 8 highlights from their albums since the 90s.

It took a few songs for the stadium to fill completely, but U2’s sound was locked in from the first martial drum beats and chiming guitar arpeggios of 'Sunday Bloody Sunday'. The opening set is played without video projections or pyrotechnics; that minimalism, and remarkable audio clarity for a stadium show, allowed classics like 'I Will Follow', 'New Year’s Day', and 'Pride (In the Name of Love)' to shine. When it was time for The Joshua Tree, the audience was ready.

Bands that do “full album” live shows run a risk of coming off like historical re-enactors at the museum of their own career. But when the songs are as good as the ones on The Joshua Tree, it’s a risk well worth taking. The opening sequence— 'Where the Streets Have No Name', 'I Still Haven’t Found What I’m Looking For', and 'With or Without You' — sounded as urgent now as then, and the already excited crowd found its groove, shaking the concrete stadium and singing along to every word.

For the next hour, an Irish band played an album about America for an Indian audience. It was a welcome reminder that people born elsewhere often have a sharp understanding of the American myth — the aspirational dream, the often grubby reality. Accompanied on the massive video screen by Anton Corbijn’s desert vistas and twisted forests, songs like 'Bullet the Blue Sky' and 'In God’s Country' still captured that mix of romance and rottenness to electric effect. 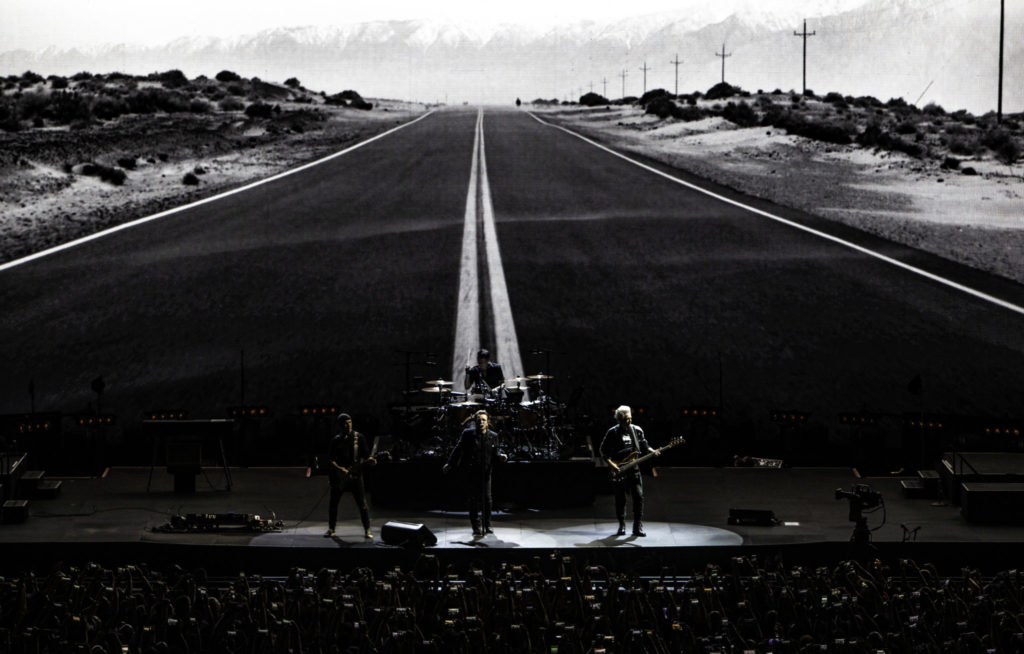 Noel Gallagher ex- of Oasis made a surprise appearance for 'Desire', and then it was time for the newer hits, with trippy visuals that recall the ZOO TV and PopMart tours of the 90s. The jump to the straight-ahead pop-rock of 'Elevation' and 'Vertigo' was a bit jarring, and some of these songs felt overwhelmed by the psychedelic effects. But the playing was impeccable and the audience loved it, so who am I to argue? Highlights included crowd favourite 'Beautiful Day', and 'Even Better than the Real Thing' driven by the Edge’s propulsive, octave-jumping guitar riff.

U2 added a number of India-specific touches that acknowledged the significance of the night. Bono noted the similar colour schemes of the Irish and Indian flags, and shouted out to Ireland’s Taoiseach Leo Varadkar, who “was born in Dublin, but his father was from… guess where… this very town!”

While the band vamped before the outro to 'Bad', Bono praised Gandhi’s idea of ahimsa – non-violence – as he told Hot Press, a long-time source of inspiration. Then he led the crowd in an extended sing-along of what he called “John and Yoko’s prayer”: “All we are saying is give peace a chance.”

In a biting irony, while Bono, Adam, Larry and The Edge were singing for peace in Mumbai, a bloody Sunday broke out in New Delhi when police teargassed a university library and beat students, following protests against a new citizenship law that discriminates against Muslims. Under the leadership of Hindu nationalist Prime Minister Narendra Modi, such human rights violations in India have been increasing, and some fans I spoke to thought Bono might address the issue directly.

Instead, a general but pointed focus on non-violence and religious tolerance continued through to the end of the night, when the renowned Indian composer and musician AR Rahman – along with his two daughters and singer-songwriter Rianjali Bhowmick – joined the band for the first live performance of their new single 'Ahimsa', and tour-closer 'One'.

With so many moving parts, even the best stadium rock can’t be spontaneous. But these two songs (briefly rehearsed during sound check) had a welcome air of improvisation. Bono seemed invigorated, cuing entrances and cheering on the young women. The arrangement of 'One' was simple but effective, layering harmonies into the first two choruses and a lovely call-and-response into the third.

Three young Indian women — one veiled — singing “One life, but we’re not the same, we get to carry each other” with four Irish men who happen to be the biggest rock band in the world: what better way to end a tour that aimed to break new ground? 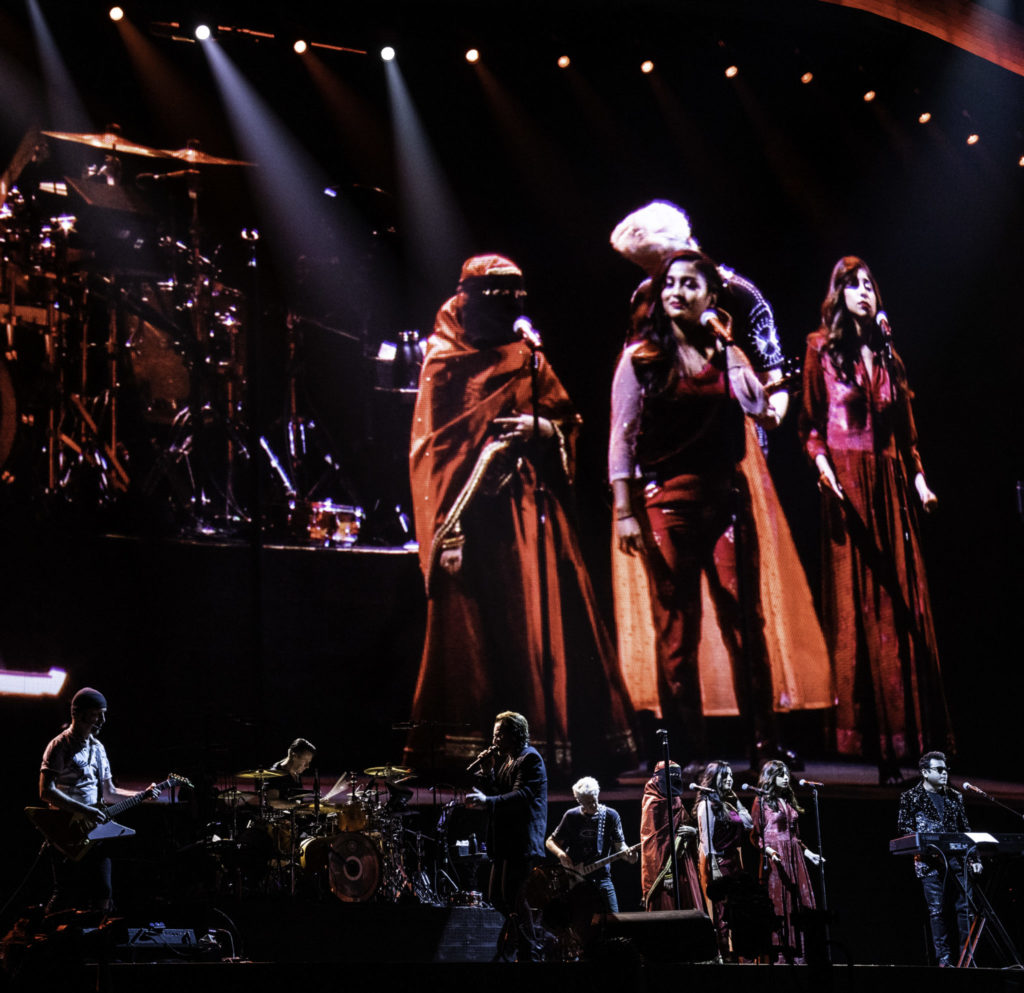 Bono joins forces with will.i.am, Jennifer Hudson and Yoshiki on 'Sing For Life'
Bono shares surprise new song in the midst of coronavirus lockdown
On This Day in 1987: U2 release 'With Or Without You'

On This Day in 1983: U2 Score Their First UK No.1 Album with War
On This Day in 1987: U2 Release The Joshua Tree
Niall Horan makes his solo debut on the cover of the music magazine he grew up reading, Hot Press!
On this day in 1997: U2 release Pop
U2’s Bono and Mary Robinson to launch UN education campaign for girls
"Now we’ve got to deliver an album that’s as good as the first Clash or Strokes record" -- Inhaler tell their story so far
We use cookies to ensure you get the best experience on our web site - by using this web site you consent to our use of cookies. Read more »