An estimated 20,000 - 30,000 people descended to the streets of Dublin today to demand action on climate change from our political leaders. They want immediate action to protect the earth – and to avoid young people being forced to bear the brunt of the impending climate crisis as the future unfolds.

Tens of thousands of people – students, parents, teachers, workers, and more – took to the streets of Dublin, to participate in today's Global Climate Strike – the humble objective of which is to save the earth from destruction. Here's what some of them had to say... 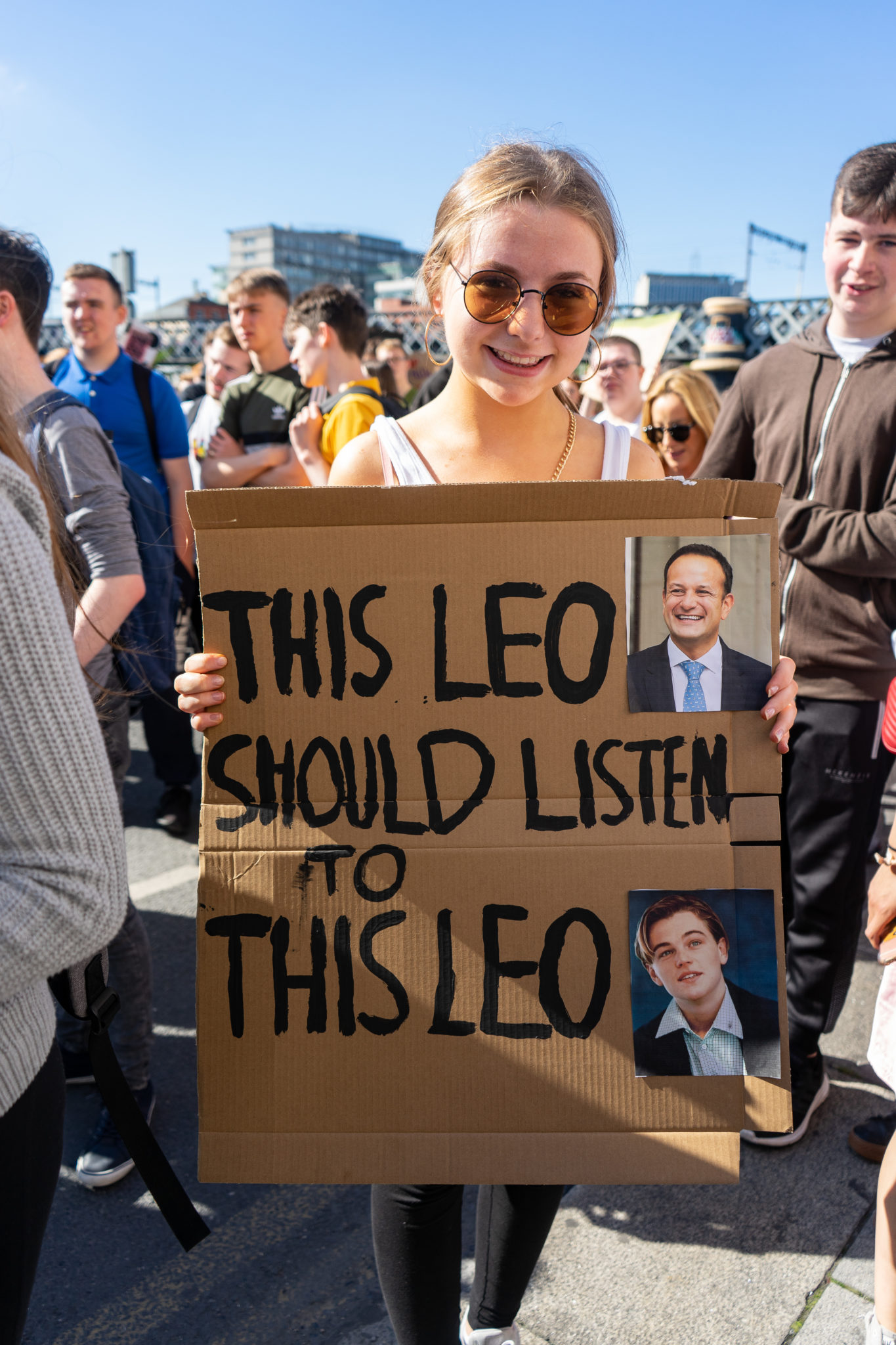 In a strike led by the youth, one thing is certain: there will be some stellar memes. Ella Clancy did not disappoint. Her poster, recycled from an old box, dares Taoiseach Leo Varadkar to take a lesson from Leonardo DiCaprio, the famed actor and environmentalist.

"I believe that the government in Ireland isn't doing enough," she asserts. "And they're not listening to the young people. We're the ones that have our future ahead of us and they always talk about prepping the youth for the future. But then, when it comes to actually doing stuff about the climate, they don't care. So we're showing them that when we all come together, we're super powerful."

While she dreads the possibility of the climate crisis playing out, she still has faith that the strike today will make waves. If the Taoiseach were to learn one thing from today's demonstration, she hopes it to be this: "For Leo, I'd say take a stand now before it runs out." 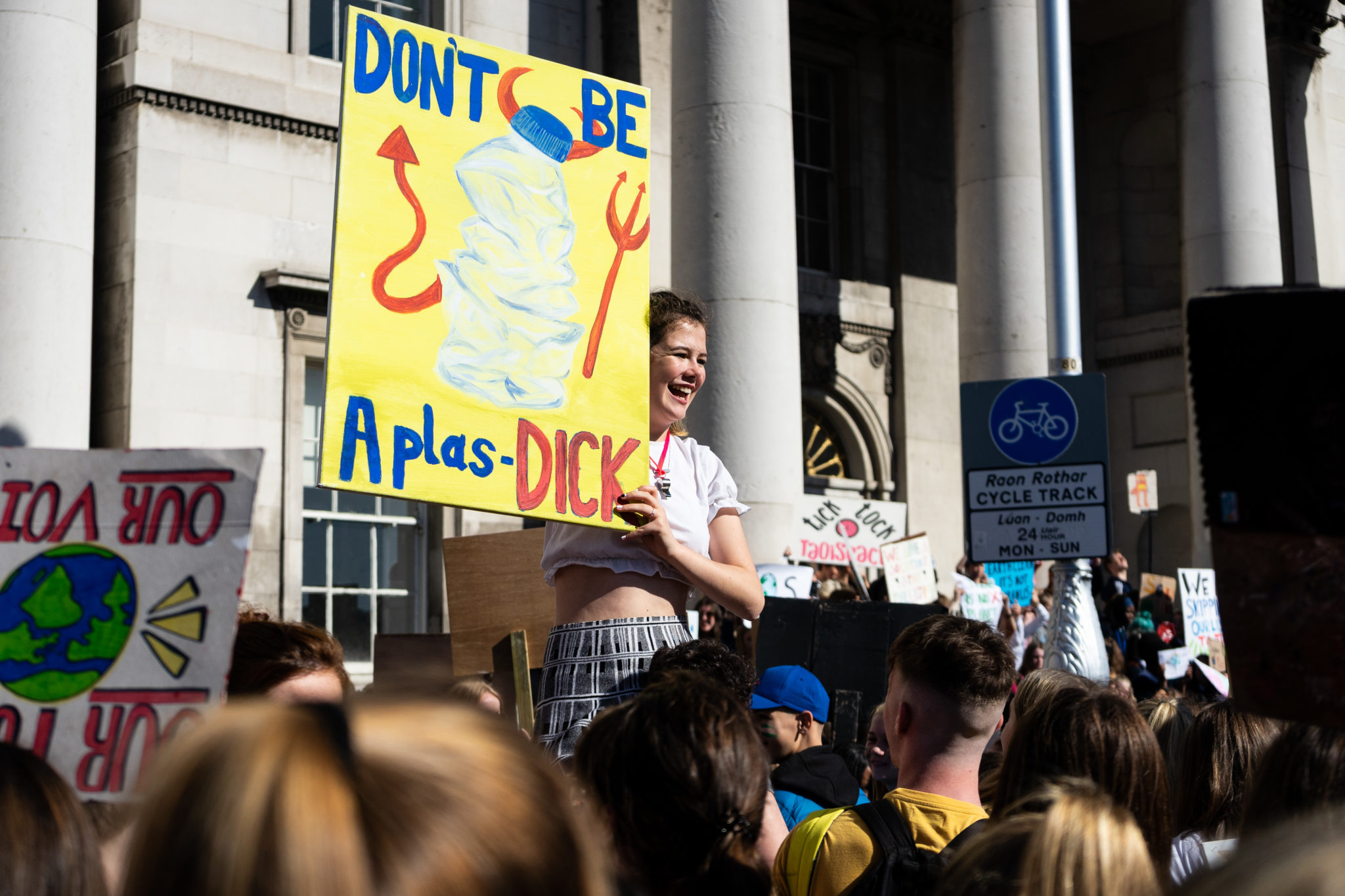 From the middle of the masses gathered in front of Customs House arises Maisie McMahon. She hoists a bright yellow, hand-painted sign reading, "Don't be a plas-dick" with a picture of a crumpled single-use water bottle with the devil's horns and tail.

She blows the whistle around her neck and chants in response to the current tune: "What do we want? Climate justice!" she screams.

"When do we want it? Now!" she adds, without skipping a beat.

"We're all gonna be gone pretty soon unless we make a big change. And we're all really young, so we wanna keep going for a while," says McMahon.

While she's sure going to class today would have been a good idea, since she has an exam soon, she said she did not doubt her decision to strike instead. "I would be in school studying history, because I have a big history test coming up," she explains. "It's mad that I should be studying and doing well in my exams, but I have to strike for something as basic as saving the world." 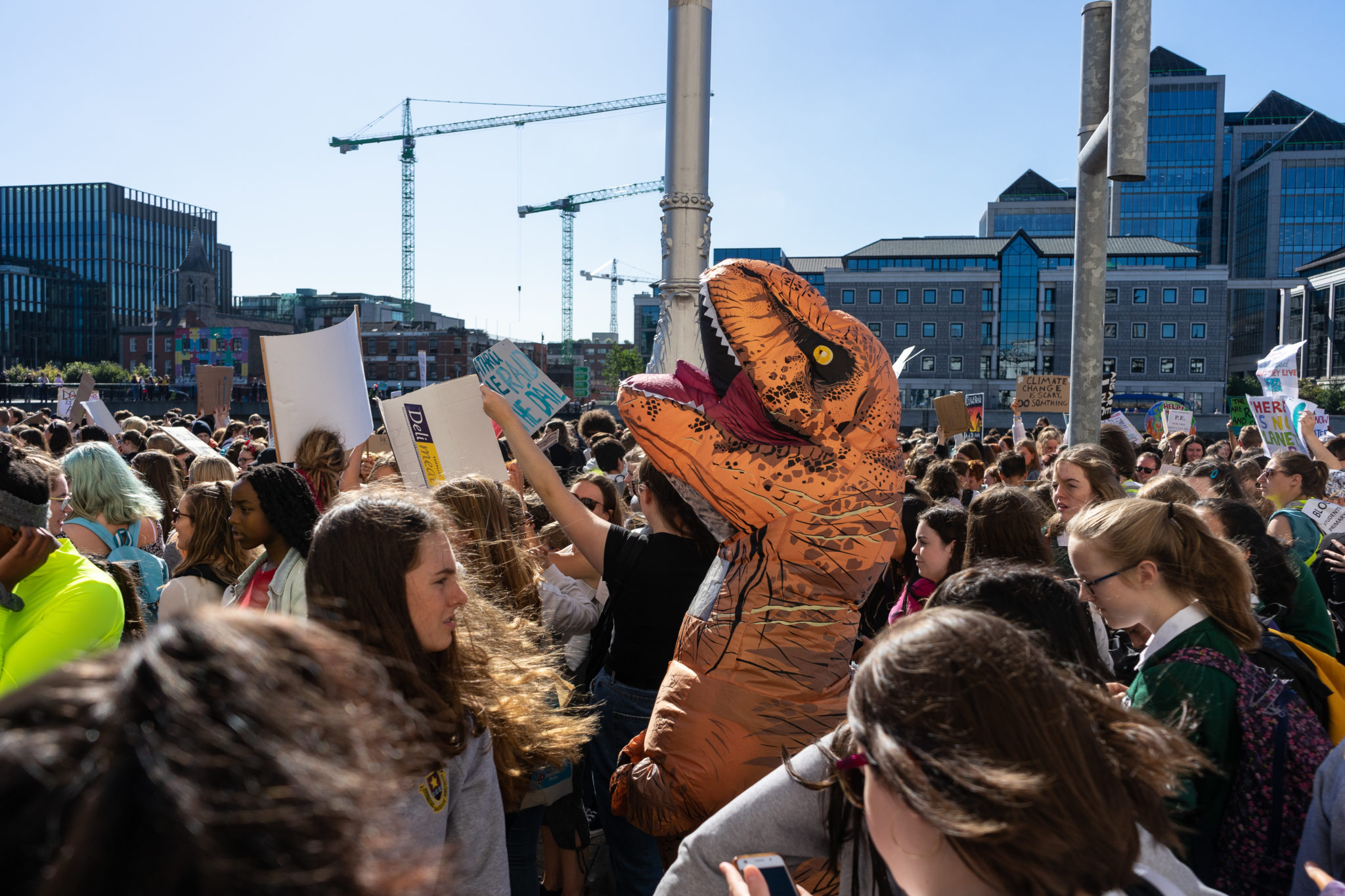 Many students donned their school uniforms or the typical jeans and t-shirts they'd normally wear to school. But Grainne Gillespie thought she could use her outfit to make a statement.

"Well, my costume is based on the t-rex from Jurassic World," she explains. Recalling the dismal fate of the dinosaurs, she warns that we could very well be facing another mass extinction.

"Don't let other animals go away like the dinosaurs," she pleads.

Gillespie offered a simple solution. "It's basic," she deadpans. "Cut emissions. Do a better job of cutting emissions in big industry." 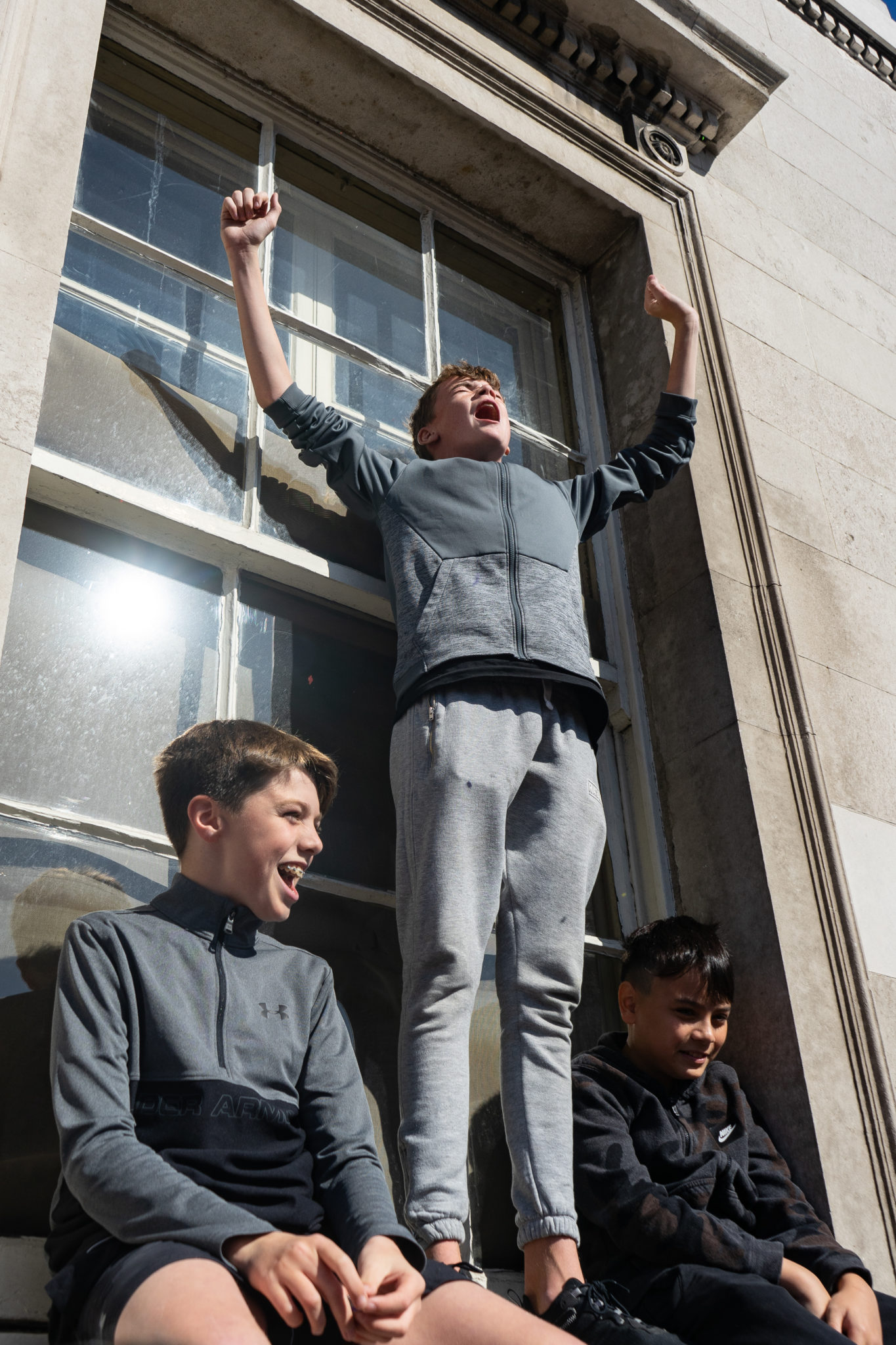 The chants at the strike roared across the Liffey this afternoon. Of them, the one led by 14-year-old Eoin Byrne was particularly catchy.

He climbs onto the window-sill in front of The Customs House and raises his arms to rally the crowd. "When I say climate change, you say fuck it!" he screams.

The desperation in their voices is clear, but Byrne is all smiles. In his quest to save the earth, it is unity and action that he demands, and the crowd is giving it right back to him. 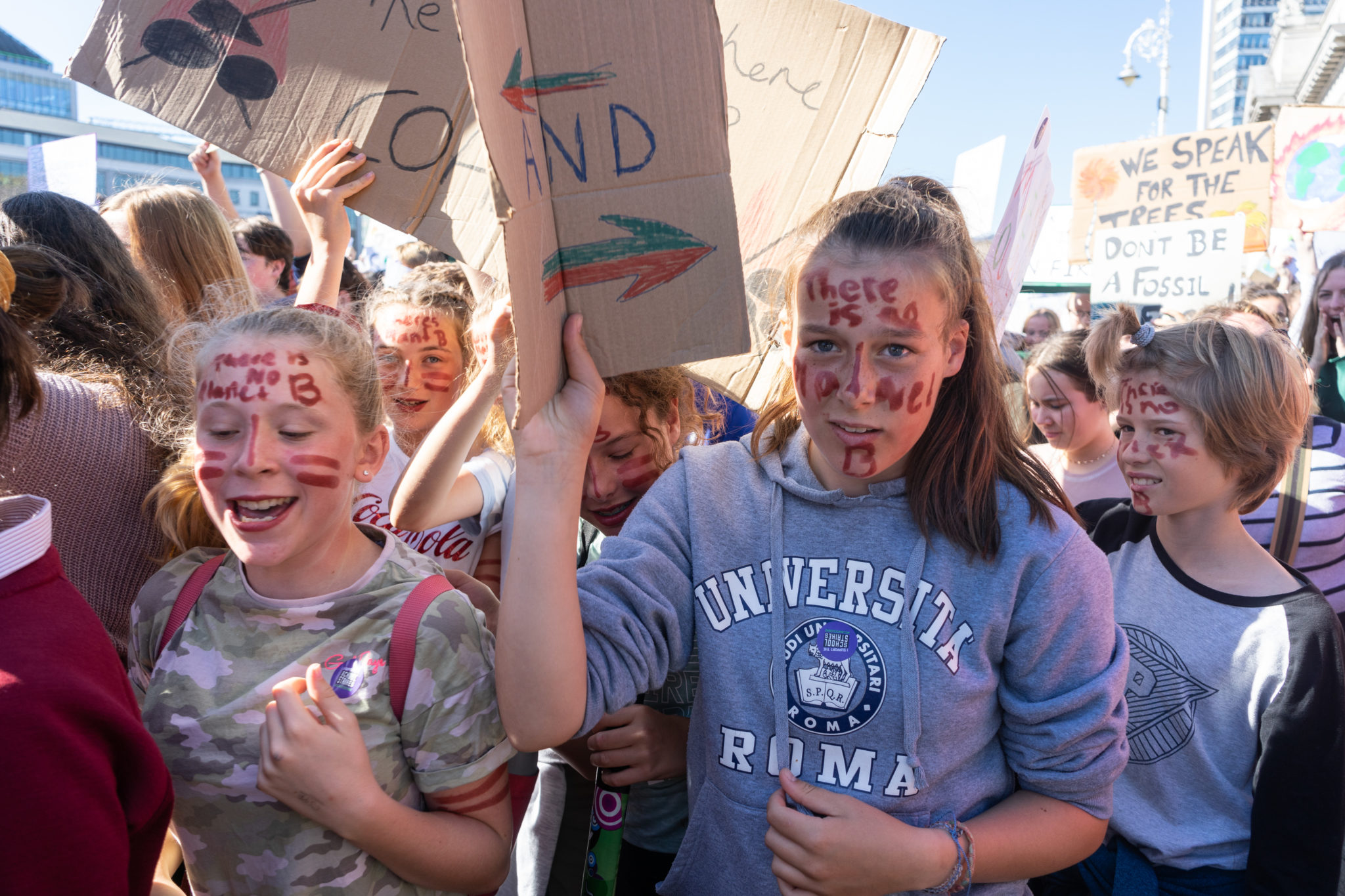 It's not blood, but it sure does invoke some level of discomfort.

"There is no Planet B!" they all exclaim, in reference to the popular pun comparing birth control and climate change.

With the earth itself under imminent threat, they chose the phrase to demonstrate the urgency of the situation, they say. 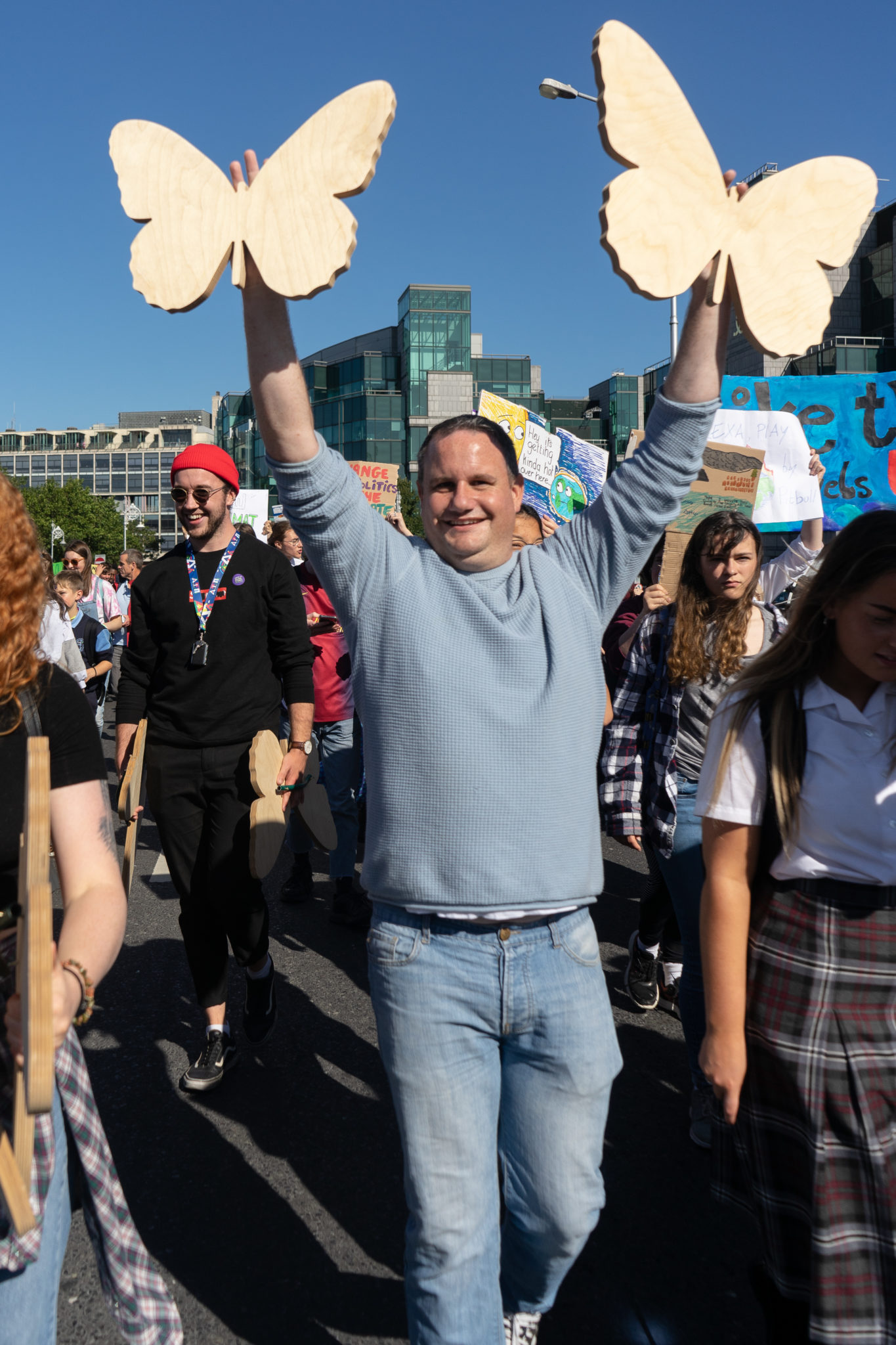 Amongst all the teenagers towing cardboard signs, Stephen Neville emerges with a wooden butterfly in each hand.

"This is actually a re-cycled piece of wood in the form of a butterfly," he explains of his unconventional sign that he and his coworkers at JEArchitecture are donning. "We used it on a previous project in Portrane, but we wanted to make a local change – and also to bring it and illustrate it on a national level as well."

The signs aren't just aesthetically pleasing, says the 37-year-old. They are part of a larger symbol of biodiversity and ecological protection.

"The philosophy behind it is the local coastal area, there's a local Bleeding Pig Festival and it's a cliff formation in Portrane that is celebrated every year around the harvest season. And one thing we noticed was that the farmer that's living next to this cliff edge failed to spray this specific area: all of the fields, which just so happens to be at that Bleeding Pig formation. And what we noticed was wildflowers growing in that area. And a lot of butterflies have congregated there since the lack of spray on the field on the land. And I think it's very significant in terms of climate change, because if we all can do a little bit and promote it, it can go a long, long way. It's like a ripple effect. And that's why we're here today."

He adds that the threat to biodiversity is only part of the problem, though.

"The government has failed us and it's been proven yesterday in the decision that was made," he says in reference to the High Court's decision this week against an environmental NGO's challenge to a government plan they claimed was insufficient at reducing carbon emissions and combatting the climate crisis.

"It's gonna cost us millions, if not billions, to resurrect and change what we've destroyed. And the government haven't acted fast enough to make those changes according to Europe. And we're here to make change." 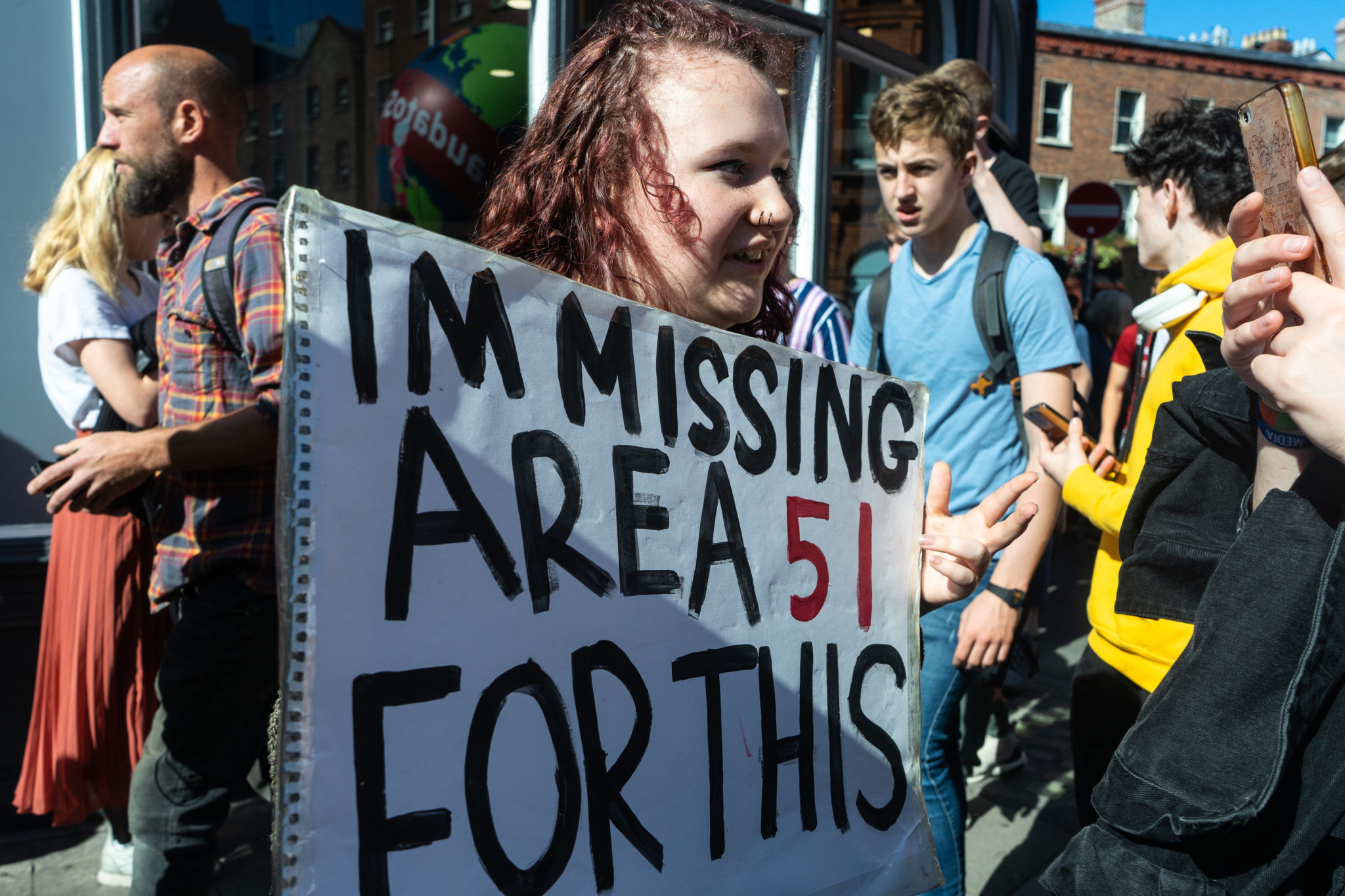 "I'm here because the government are not doing enough to combat the climate crisis and I feel as though everyone needs to be heard," says Louise Claffey. To her, it's more important than storming Area 51, a top secret military base in the US. The storming of Area 51 went viral when an online event was created for the same day that combined storming it and confirming reports of alien life.

There are bigger problems than fulfilling the viral meme, reminds Claffey. And everybody should be worried.

"People say it's just a secondary school movement, but this is going to affect everyone. We need to take care of our planet. And we need to save it before it's too late."

As for what she hopes will come out of today, she has an agenda. 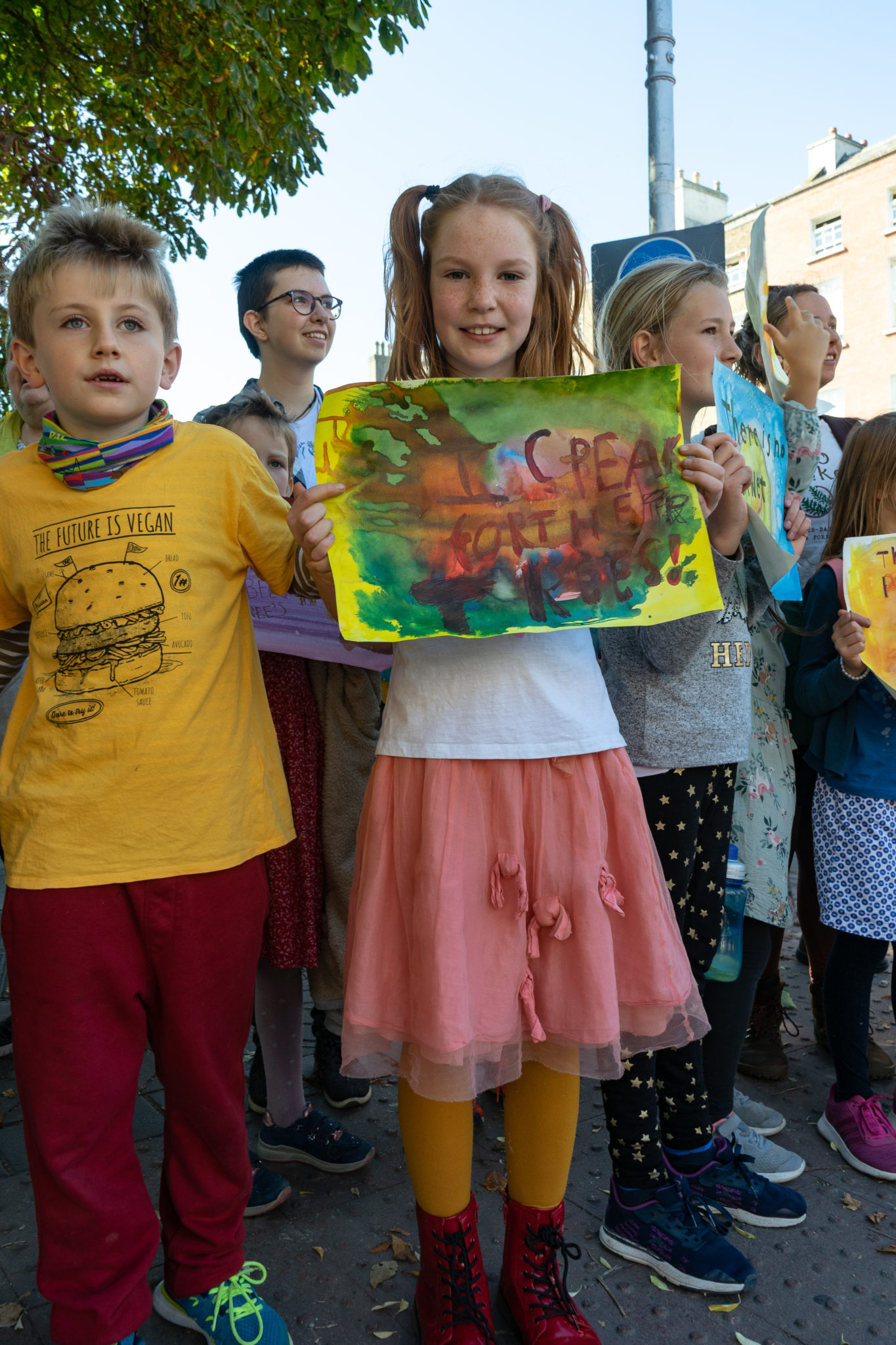 At nine years old, Orla already knows the value of her voice. "I speak for the trees," reads a colourful sign she painted herself.

Don't be fooled by the pigtails: Orla means business.

When all is said and done, she hopes the adults will heed her advice and take action. "The Earth needs to get more healthier," she says. "We need to stop throwing rubbish everywhere."

For Orla, striking is only the first step. "We will work for it," she promises. "We don't throw rubbish all over the place. We keep it tidy. We keep it clean. We don't be mean to the earth. We don't stomp and say 'I hate the earth!'" 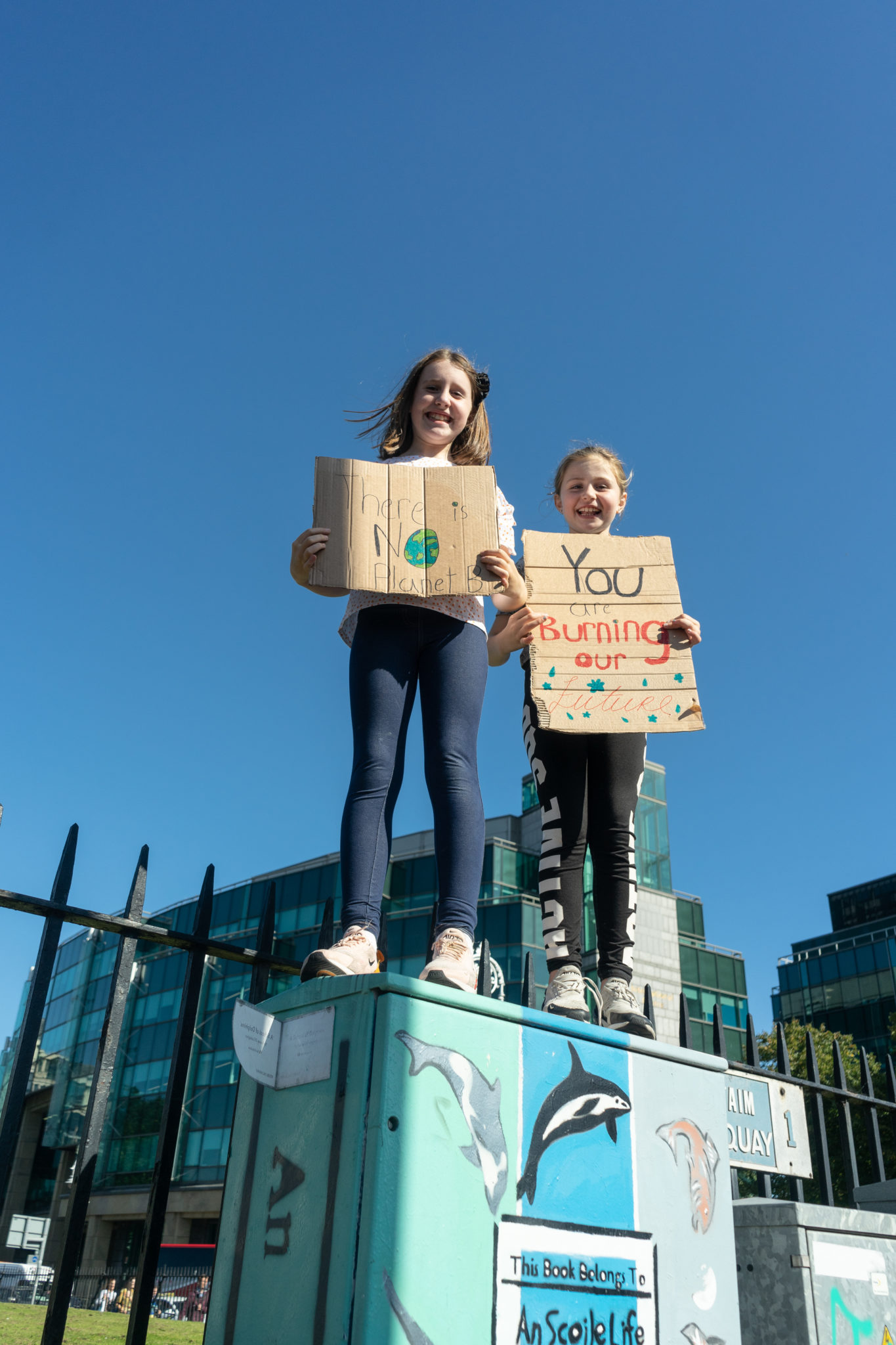 It's quite the surprise to see Eabha Williams and her friend Charlotte, two eight-year-olds (well, eight-and-a-half in the case of Eabha), towering over a crowd of 30,000 people. But how else are they supposed to get their message out?

With a slight waver in her voice, she adds: "Well, we don't really... we just don't want the world to end. And we don't like the way that people are littering and the way that most people don't care about the world."

"And we just don't want the world to end 'cause nobody wants anybody littering," adds her best friend Charlotte. "And it's not fair on everyone else if they don't really help the world."

Late-night DART and commuter services begin this weekend
Review: "Grounded does for back gardens what Jaws did for oceans
Research shows young Irish generations willing to make sacrifices to help climate