Electronic Sheep is one of the hottest names in Irish fashion, and was founded by the dynamic design duo Brenda Aherne and Helen Delany. The pair have lived and worked as designers in London, New York, Munich, Rome and Dublin, and over the past 16 years their knitted ‘tapestry-esque’ pieces have gained a cult following. Electronic Sheep is now stocked globally throughout the UK, Ireland, Switzerland, Amsterdam, Italy, Germany, Japan and Australia.

However, the story all began on a street in Dublin, where Aherne and Delany grew up as next-door neighbours. And what better way to bond with the girl next door than over fashion?  “We became rockers just as we hit our teens,” reflects Delany. “We listened to Pink Floyd, Hawkwind, Black Sabbath and Led Zeppelin, and spent all our weekends in Freebird record store and Flip second-hand shops. As we got older, our taste got more eclectic – we got into everything from Elvis to The Velvet Underground. As important as the music was, so were the people who belonged to the scenes and the clothing that went with it. The Smiths, The Cure, The Clash and The Ramones all made their mark on us. 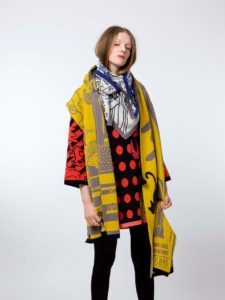