Theatre Review: It was easy (in the end) at the Abbey Theatre
Brooke Weber

It was easy (in the end) is an experiment. It’s an experiment in thought, in fear, in action: advertised as an attempt to end capitalism through art, the three-hour-and-ten-minute long production runs the gamut of topics from industrial overwork to the drug trade to the prevalence of phone surveillance, complete with selfie sticks and plenty of livestreaming to boot.

Set in a world with a rapidly decaying sense of imagination, the cast of thirteen performs various exercises in order to get back what they’ve lost. Each player slips between up to seven imagined roles throughout the show. Lines from Shakespeare’s classic tragedy Hamlet connect the stories: actors keep a watchful eye out for ghosts in the audience; homeless men become the Prince of Denmark in the space of a breath; factory workers read the play aloud and desperately quash the desire to perform.

Like any good experiment, some things work out – the spark flashes, and the flame is lit. The transitions into Shakespeare are rich and full of double valences that add a grounding sense of weight. Barry O’Connor is a formidable Hamlet; the role is malleable in his hands. Though O’Connor switches from part to part throughout the show, sometimes with no warning or clear break between characters, when he’s Hamlet, you’ll know. There’s something magical playing behind his eyes. 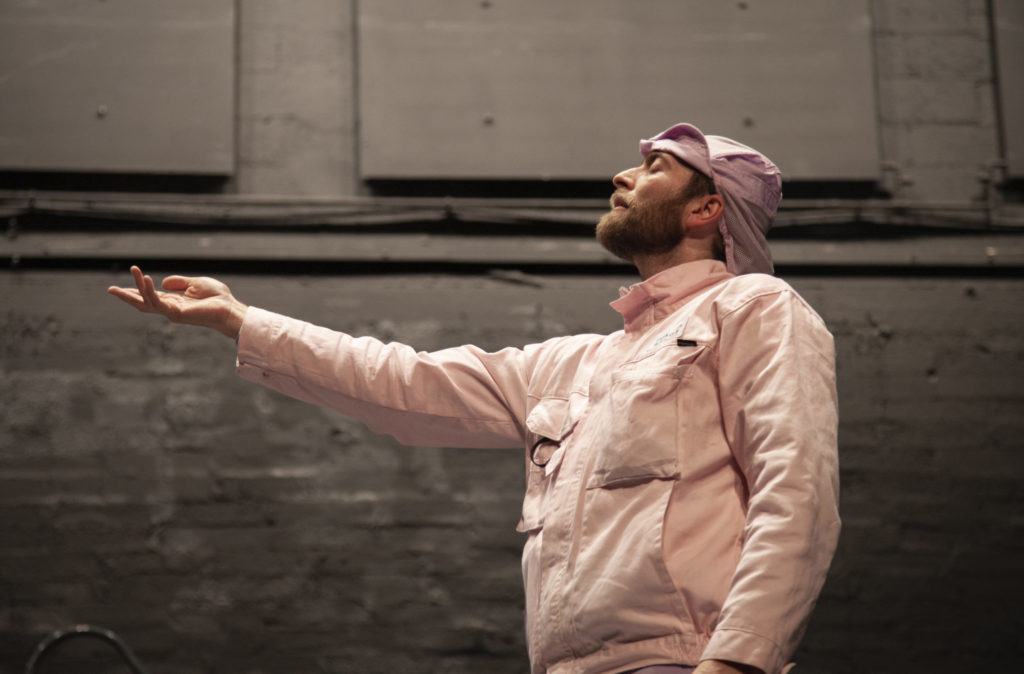 Eva-Jane Gaffney shines, bringing both humour and an eerie sense of doom to her performance when they’re called for. Eoin Winning’s deadpan comedy is a welcome break from the show’s heavy subject matter. This is a cast that clearly cares, and that’s a beautiful thing to watch.

Like any good experiment, too, some things don’t quite hit the mark. The tone of the play is nearly impossible to pin down, at least in the first two hours. Radical statements about the necessary nature of feminism are immediately undermined by surrounding jokes. “Woke” culture is reaffirmed in one moment and belittled the next. Two female cast members inexplicably disrobe whilst frantically trying to teach the others about the dangers of cocaine. Phones are brainwashing agents of control, serving only as vessels for an onslaught of online hate brought on by social media. Later, though, they’re cast as an instrumental part of the downfall of the capitalist regime.

What position is the play taking? Are we meant to laugh when a woman accuses a man of playing Ophelia through the male gaze, or are we meant to question why we’re laughing? The work never quite goes that extra step, doesn’t quite push the audience to the unexpected, radical place it claims to approach.

Maybe this ambiguity is purposeful, satirical in some way. Perhaps the point is that there is no point, that there need not be a unified message. If the show is celebrating diversity of thought, though, its separate threads are lost in the muddiness of the converging and diverging plots and characters. The fog is so thick and multi-layered and touches on so many issues that it’s difficult to see through. 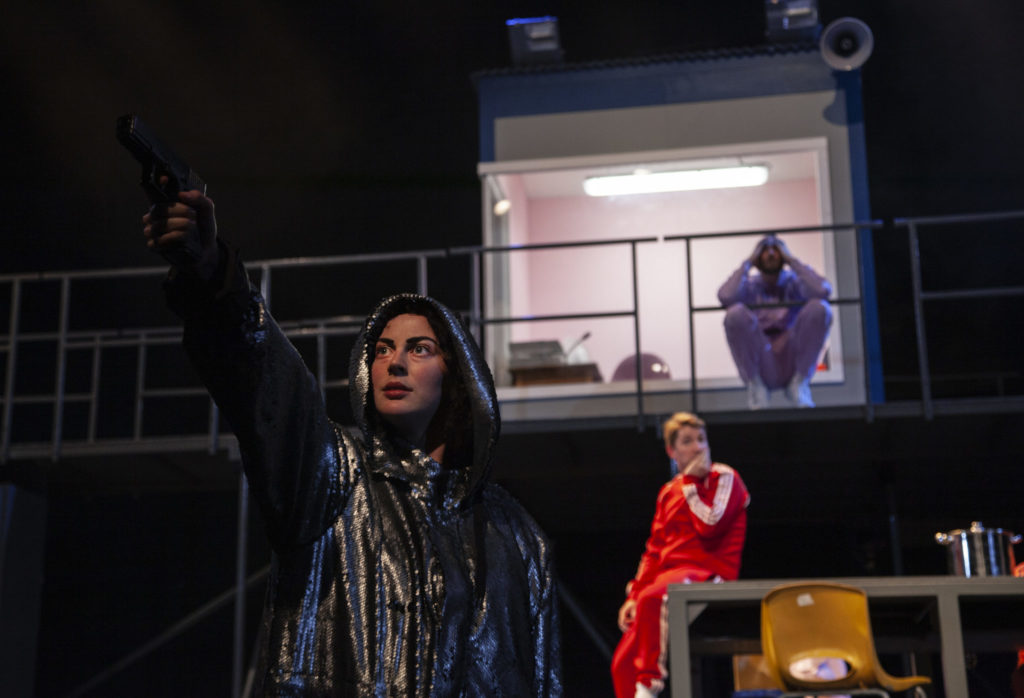 The play’s much stronger second act is where all the imagining is done. Finally living in a world post-capitalism, the actors exit one by one after performing monologues about their roles in the end of the institution that had once ruled their lives. Neil Keery muses on breaking down Belfast walls to applause from the audience. Pom Boyd reaches back to the shattered beginning of time and uses the pieces to craft a future without an apocalypse.

There’s a comfort in this, here. There’s a comfort in the idea that there’s another way, that there’s some way to imagine a world that lasts beyond thirty years from now and make that world real if we all just decided to try. There’s productive experimentation, a format that the audience can follow, an enactment of a society led by moral law rather than the economic imperative to generate, generate, generate. But the path from act one to act two isn’t a path at all: it’s a total teleportation.

Was it easy, in the end? I didn’t want it to be – I expected this play to challenge me, to question me. To some extent, It was easy (in the end) did deliver on that promise. Though the play never quite arrived at a way of thinking all its own, I found myself opening up, really trying to listen and see and imagine. This piece is an exercise and an experiment for all, not just those on the stage. Imagine. Imagine a new reality. Imagine it and walk into it.

We have that power, the play seems to suggest. In today’s times, it’s a nice reminder that daydreaming might not be so unproductive after all. In fact, it might just be the only way forward.

It was easy (in the end) runs through 4 May. 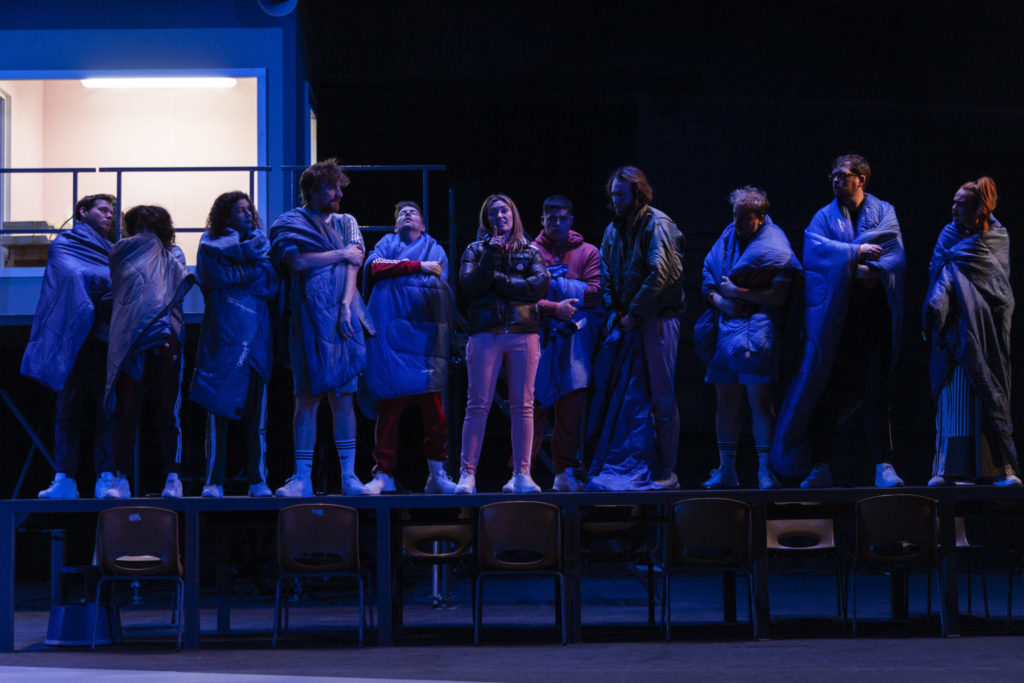 New Play 'Dublin Will Show You How' Premiering in April
€75 million in Arts Council investment to be made for individuals and organisations throughout 2019
'The 24 Hour Plays' Return to the Abbey Theatre
Arts Council Respond to Abbey Theatre Concerns by Withholding 300k Funding
12 Christmas Poems in the Abbey Theatre
The Abbey Theatre announces details of the 2019 Season
We use cookies to ensure you get the best experience on our web site - by using this web site you consent to our use of cookies. Read more »