Sam McBride's Burned: How a DUP Scandal led to one of the most talked-about books of 2019
By: Peter McGoran

Standing somewhere between being a real-life political thriller, and a forensically researched indictment of governance in Northern Ireland, Sam McBride’s Burned has become the most talked about book of 2019.

It’s been over two and half years since Sam McBride last chatted to Hot Press. Back in January 2017, as the Renewable Heating Initiative scandal – a botched green energy scheme which stood to cost the NI taxpayer £500 million – continued to embroil Stormont, Hot Press went to the journalist who had been following the developments with a fine tooth comb right from the start.

In the years since we talked, Sam has followed the story relentlessly. He’s covered the Stormont Executive crumbling and failing to reform, as well as the major public inquiry into the scandal, which has exposed the rank incompetence of some within the NI civil service, as well as the dirty dealings within the DUP’s top branch – including the former First Minister Arlene Foster and several of the party’s highly paid, unelected Special Advisers (SPADs).

Sam, who works as Political Editor for The News Letter, knew there was a massive public interest in this book, but even he couldn’t predict the response.

“I could see that people were interested in RHI – we could see that from the outset in terms of web data and paper sales – but it’s one thing for someone to want to read 1000 words in The News Letter, and it’s another to pay 17 quid to read a book of this size! So I think my publisher deserves a lot of credit for taking the risk with this. Even in terms of the first print run, 6,000 copies, it was ambitious. Now we’re on our third print run.”

Unlike some of your run-of-the-mill stories of political impropriety, RHI was an incredibly complex scandal which involved numerous players and dozens of threads to untangle. And yet, despite its complexity, it captured the public’s attention almost immediately.

“I think there’s various reasons for that,” Sam says. “One of them is the power of TV. The investigative Spotlight programme on the BBC, with presenter Conor Spackman literally throwing bank notes into the fire as he described how so much money had been wasted while Arlene Foster knew about it – that was captivating. Then there was the fact that Stephen Nolan picked up on it. He has a massive audience and can communicate complex things in a very simple way. Then the third element was the extraordinary TV interview with former Stormont Minister Jonathan Bell [who blew the whistle on much of the scandal and turned against his DUP colleagues in a spectacularly dramatic fashion.] There’s been nothing like in the history of Northern Ireland. 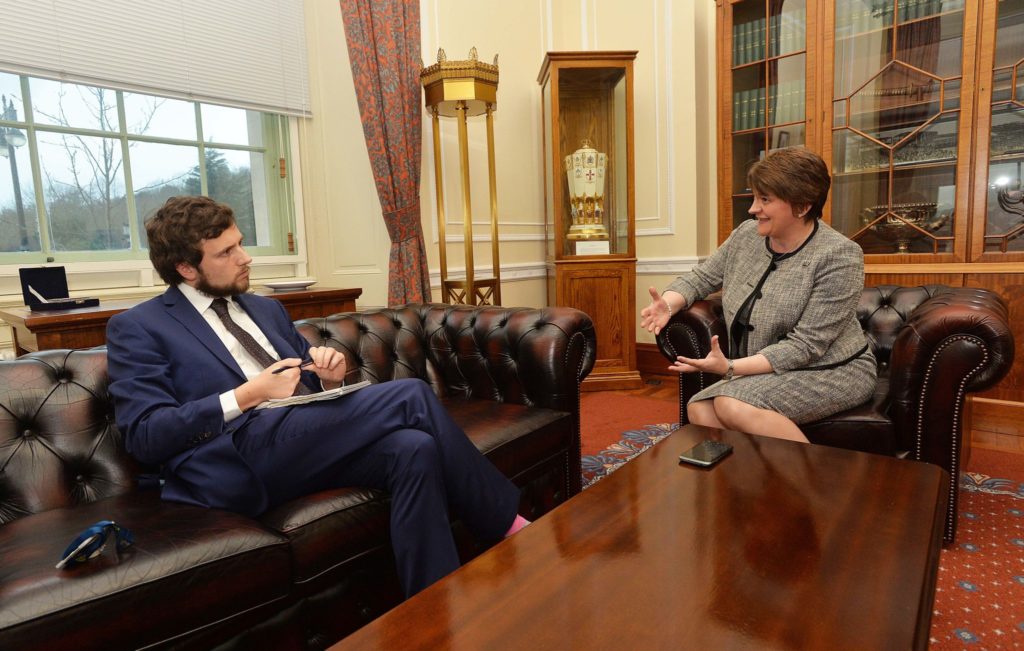 “I think another part of it was that this was not the first scandal. If it had come in 2007, after Stormont had been restored, I think a lot of people would have given a by-ball. But this came after the NAMA scandal, Red Sky, expenses. There was a general sense that Stormont was an ineffectual form of government.”

Having been asked multiple times if he’d write a book about RHI (and really, there’s no more authoritative voice on this topic), Sam began writing in earnest last autumn. Spending thousands of hours going through inquiry transcripts and documentation, he put together a timeline which exposed the corruption at the heart of this scandal, and he spoke to sources on and off the record to build a vivid picture. His story comprehensively covers how civil servants pushed for the RHI scheme despite being warned that the lack of cost controls would leave it open to abuse, but perhaps the most shocking element is his examination of how much power was in the hands of a few unaccountable Special Advisers (some of whom had family members who were benefitting financially from the RHI scheme).

“It might be shocking for the public, but it was well-known in Stormont that SPADs had enormous influence,” says Sam. “And hand-in-hand with that was an inherent weakness from the civil service, that these people couldn’t say, ‘That’s against the rules’ when they were being pushed to do to something by these SPADs. There was a culture of doing things just to keep people happy. Some civil servants were doing that for noble reasons – they thought that was a crucial element of the peace process, it was realpolitik – but once you start on that slippery slope, rules ultimately become meaningless.”

Sam doesn’t tar the entire DUP with one brush, saying that members have reached out privately to help him with this book. Does he get the sense that this has really rocked the DUP’s inner workings?

“There’s a battle going on within the DUP and has been since the fall of Stormont,” he nods. “It ebbs and flows according to what’s going on at any given time, but this has led to a lot of introspection. Some people on the outside will say there hasn’t been enough, seeing as the party leader and a lot of the SPADs have remained in place, but there’s at least questions being asked.”

In the kind of thing that would make for a taut political thriller, Sam shows how many of those who benefitted from the subsidies of RHI were, in fact, poultry farmers supplying to one business – Northern Ireland’s largest private sector firm, Moy Park. He pieces together the numerous benefits, directly and indirectly, that Moy Park got from RHI, as well as the political clout that they had at Stormont.

“The Moy Park element is really interesting for a number of reasons,” he says. “If you step outside the immediate confines in this story, and think about it in global terms – what do you do when you’ve got a company which is this dominant within an economy? They basically are the poultry sector. Therefore, when the company is saying, ‘We need you to do to this’, Stormont is almost a delivery agent for them. If you place yourself in a situation where you are the Minister, and Moy Park come to you and say ‘We’re a capitalist organisation. Play ball with us or we’ll take these jobs elsewhere’, what do you do? Now, there’s no evidence that they explicitly said that in a form that has been recorded, although we do have a civil servant, David Thomson, who heavily suggests that the scheme was in part intended to help Moy Park. One of the elements is that, when a company gets to be that big, governments are potentially at their mercy.”

In a bizarre, explosive side-story in the book, Sam documents how the RHI public inquiry compelled one of Sinn Fein’s most powerful figures, former Minister for Finance Máirtín Ó Muilleoir, to release internal party emails and texts. His texts revealed that he had been in contact with several unseen republicans about RHI, effectively asking them what to do about the matter. Seeing as there have always been rumours that an IRA Army Council still holds the power in Sinn Fein, these texts exposed some of the secret operators behind the party.

“I think they revealed an awful lot,” Sam agrees. “It’s very damaging for Máirtín because he was presented as the new face of the party – pro-business, responsive to the public. And, as Minister for Finance, he was also the second most powerful person in the Executive behind the First Minister and Deputy First Minister. But ultimately, what you see is that he was going to unseen figures, some of whom have very deep links to the IRA – either as members or as go-betweens in the past – and there’s a sense that Máirtín comes out as a greatly diminished figure, basically a glorified messenger.”

This has implications in the Republic as well, where Sinn Fein are trying to grow the party.

“From a southern perspective, it raises questions about how Sinn Fein operates. If they do get into government in the south – which is looking unlikely based on the polls – is this going to make for good governance? The idea that politicians are accountable, that doesn’t work if there’s secret decision makers in the background.”

With the inquiry into RHI expected to be published in November, and with international eyes still on Northern Irish politics because of Brexit, many will be wondering what, if any, the repercussions of this will be.

“It’s very difficult to say. That’s the honest answer. I think there’s going to be an awful lot of people criticised in this. I think the great hope for Arlene Foster is that if everybody is to blame then nobody is to blame. Then she can say, ‘Yes, everybody got things wrong and I was one of them’, and she makes an apology and hopes that that’s enough. I think the really concerning thing for those within the DUP and those within unionism is that when they look at her and this story – how she’s reacted, her inattention to detail – do they see someone who is a credible leader? A First Minister? That’s more significant. It’s exposed Arlene Foster in a way in which she’ll probably never recover.”

Burned is out now, via Merrion Press.

Priest delivers moving eulogy to Lyra McKee at her funeral in Belfast
Northern Irish political leaders release joint statement in response to death of Lyra McKee
Brexit: Everything hinges on 10 votes from the DUP
The Message: Is It To Be Deal Or No Deal?
Book Review: Eoin Colfer, Highfire
EU touring artists will need visas to perform in the UK beginning in 2021
We use cookies to ensure you get the best experience on our web site - by using this web site you consent to our use of cookies. Read more »