Roll Up For The Next Emerald Gem Of Ireland

Everyone has a good book in them, goes the hoary adage, but that, frankly, is a load of old me arse. I know, I know, you have a file on the computer called 'novel' or 'masterpiece' or some such thing, and you might even open it now again and stare at its blank, polar-like expanse, stroke your chin in something approximating a thoughtful manner, then close it again for another month. The great Christopher Hitchens once said, "Everyone has a book inside them, which is exactly where it should, I think, in most cases remain," and, as usual, he was on the money. Just because it happened to you does not make it interesting. I know that you've sat in the boozer, cogitating and pontificating on the great work you're in the process of extracting from your cavernous mind, although "it's probably too real to find an audience". I know because I was/am that soldier, and I'm in no position to be throwing stones - although I get paid by the word, so always expect a barrage.

You and I and the dog are only too painfully aware that the chances of you ever holding a book in your hands with your name on it are slim to none, but there is hope! The great Patrick McCabe is throwing you - you! - a rope, and not one to put a loop in and swing over the nearest beam because you're "just too special for this world" either! Thanks to the miracle of modern alms gathering that is crowdfunding, you can get in on the ground floor with regard to his forthcoming book, Poguemahone. There are a variety of rewards to be had once you transfer your shekels, including - but not limited to - getting your name into the book itself. Return to the boozer above in glory, with the hardback under your oxter, and loudly point to your moniker on the pages as proof that you have helped McCabe complete another masterpiece, kind of!

You hardly need me to tell you that McCabe is one of the greatest Irish authors at work today, but I shall, because of the point I made earlier about the relationship between words and euros that puts tobacco in my pipe. His is a wholly original voice, that shot out of some place in Monaghan and headed straight for notoriety with his fourth novel, The Butcher Boy. He liked the feel of the place, and so stayed there with work as crucial as The Dead School and Breakfast on Pluto, oddball-punts like Emerald Gems Of Ireland and Winterwood, and returned to catch up with Francie Brady in 2019's The Big Yaroo. McCabe is the chronicler of that old country madness - the stray sod country - that is surely familiar to anyone like myself who grew up aways away from Health Food "stores", "broadband", and people who put down the word 'barista' on their C.V.s.

I'm lucky, I get sent a lot of books to read, and while I'm very grateful for them all, you can take it from me that we do not need another summer Dún Laoghaire romance, or one more windswept country epic where history bleeds through to teach the protagonist a lesson. What we do need is McCabe, and this is your chance to help make his next book a reality. How can you say no? Go now to this location - https://unbound.com/books/poguemahone/ - and click on the video to enjoy Lisa O'Neill's singing, if that's your bag, but pick a tier - hardbacks, audiobooks, gigs (unlikely to be happening tomorrow or next week) - and cough up. How about a pledge as a present for that annoying nephew? When he shoots you a malevolent look on Friday and mutters something about this not being the PS5 he asked for, shoot a smug glance back from behind your celebratory glass of port and assure him that he will thank you later, when he gets over all that button-pressing shite. 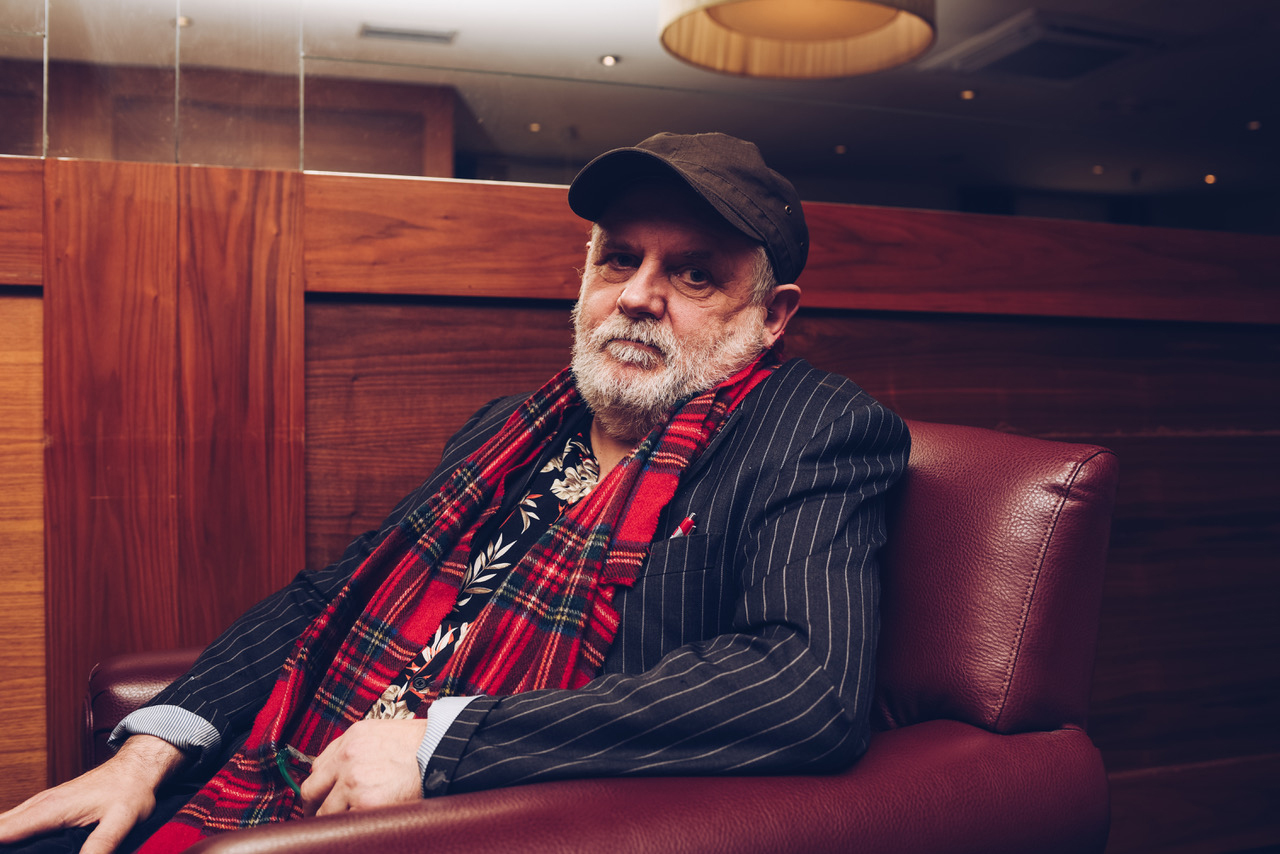 Here is how McCabe himself describes Poguemahone.

"It's a wild, 600-page ballad, a free verse monologue narrated by Dan Fogarty, an Irishman living in England, who is looking after his sister Una, now 70 and suffering from dementia in a care home in Margate."

"From Dan’s anarchic account, we gradually piece together the story of the Fogarty family. How the parents are exiled from a small Irish village of Currabawn and end up living the hard immigrant life in England. How Dots, their mother, becomes a call girl in 1950s Soho, working in the Piccadilly bar run by their legendary Auntie Nano, another exile from Currabawn. How a young and overweight Una, finds herself living in hippie squat in Kilburn in the early 1970s, and becomes infatuated with a two-timing Scottish poet and stoner called Troy McClory, much given to vatic poetry recitals and channelling prog rock vibes. How the squat appears to be haunted by vindictive ghosts, who eat away at the sanity of all who live there. And, finally, how all that survives now of those sex-and-drug-soaked times are Una’s unspooling memories, as she sits outside in the Margate sunshine, and Dan himself, whose role in the story becomes stranger and more sinister."

Janey Mac! There's some more info from the people involved too;

"What sets Poguemahone apart from the rest of Patrick McCabe’s work is its form. He's leaving the safety of the traditional novel behind him. No chapter numbers; no voice-of-God narrator; no safe handholds.

Instead, it’s structured like a swirling piece of music. The way words are arranged on the page matters. The spacing and line shapes and breaks open the meaning. At times it comes on like a modernist poem by e e cummings or William Carlos Williams; at others it’s a beat recital in the Ginsberg/Ferlinghetti mode; sometimes it makes you feel you're holed up in smoky North London pub with a folk band rattling out the auld tunes.

It’s a book that draws the reader in and asks you to look and listen, to follow it as it swirls and riffs across the page. Like the best ballads, narrative themes come and go and are reprised, each time with new variations, filling in more of the details of the Fogarty family history.

It’s a huge shape-shifting epic of the Irish in England, steeped in music and folklore, crammed with characters, both real and imagined, on a scale McCabe has never attempted before.

Imagine the supernatural terror of Beyond Black by Hilary Mantel, combined with the experimental élan of Lanny by Max Porter and the mesmeric ventriloquism of Ducks, Newburyport by Lucy Ellman and you’ll get some idea of what McCabe has achieved.

Poguemahone is audacious; a magnificent work of art."

William Carlos Williams? Lawrence Ferlinghetti? PS5 my hairy back, this is what the kids really want! I mean that too, and if the paragraphs above don't sound intriguing to you, then I suggest you go back to crushing candy on your phone, you hopeless goon.

If you're curious, but still have your arse on the fence, then perhaps this interview I conducted with the great man might knock you off of it. He talked me around the lounge, out of the hotel, and down the street. A beautiful mind, worth getting behind. Stick your hand in your pocket so reviewers - and readers - of discernment and taste might have something to look forward to.

The full details are available here on unbound.com.

Interview: Patrick Freyne on Writing, Humour, and OK, Let's Do Your Stupid Idea
Sally Rooney's highly anticipated third novel to be published this year
Rónán Hession's Leonard and Hungry Paul announced as this year's 'One Dublin One Book'

THE 12 INTERVIEW OF XMAS: Kevin Barry on Writing, That Old Country Music, and The West
Niamh Campbell: My 2020
Stephen Fry, Donald Tusk, Stephen King and more pay tribute to John Le Carré, who has died aged 89
Book Review: Tana French - The Searcher
Book Review: David Sedaris - The Best Of Me
Book Review: Dean Koontz - Elsewhere
We use cookies to ensure you get the best experience on our web site - by using this web site you consent to our use of cookies. Read more »