Sea Sessions returned to beautiful Bundoran after a two-year gap, with adored Irish chart-toppers, fast-rising rockers and blistering alternative acts putting on a stellar show for three days on end. Gerald Boylan reviews the festival with photography from Peter O'Hanlon.

The picturesque, breezy beaches of Bundoran were once again greeted by thousands of festivalgoers for a weekend in pursuit of a break from reality and the responsibility that comes with it. We replaced our houses with tents, our water with beer, our Netflix with live artists, and our vegetables with chips for a weekend as far from our accustomed routine as we could possibly get.

I arrived on the Friday evening, driving straight from work, with my pop-up tent I bought the day before in Aldi. Driving into the beautiful town of Bundoran you get a sense of the excitement for what is about to come, with 90% of people having glitter on their face or a bucket hat to make their local Gaelic jersey look like festival attire. Upon arriving at the campsite car park, I was greeted by a huge field of multicoloured tents of different shapes and sizes, surrounded by food vans which are no doubt an “essential service” at an event like this.

The tranquil sound of the Atlantic Ocean being drowned out by the various personal music speakers which friend groups would centre their tents and deck chairs around. It's the first cultural difference you experience upon entering the nation of Sea Sessions, where you become a citizen for the weekend. It takes about a 15-minute walk through a grass pathway and a short stint along the beach to get there and as you get closer, the music from the main stage gradually gets louder acting as a warning of the energy you are about to walk into. 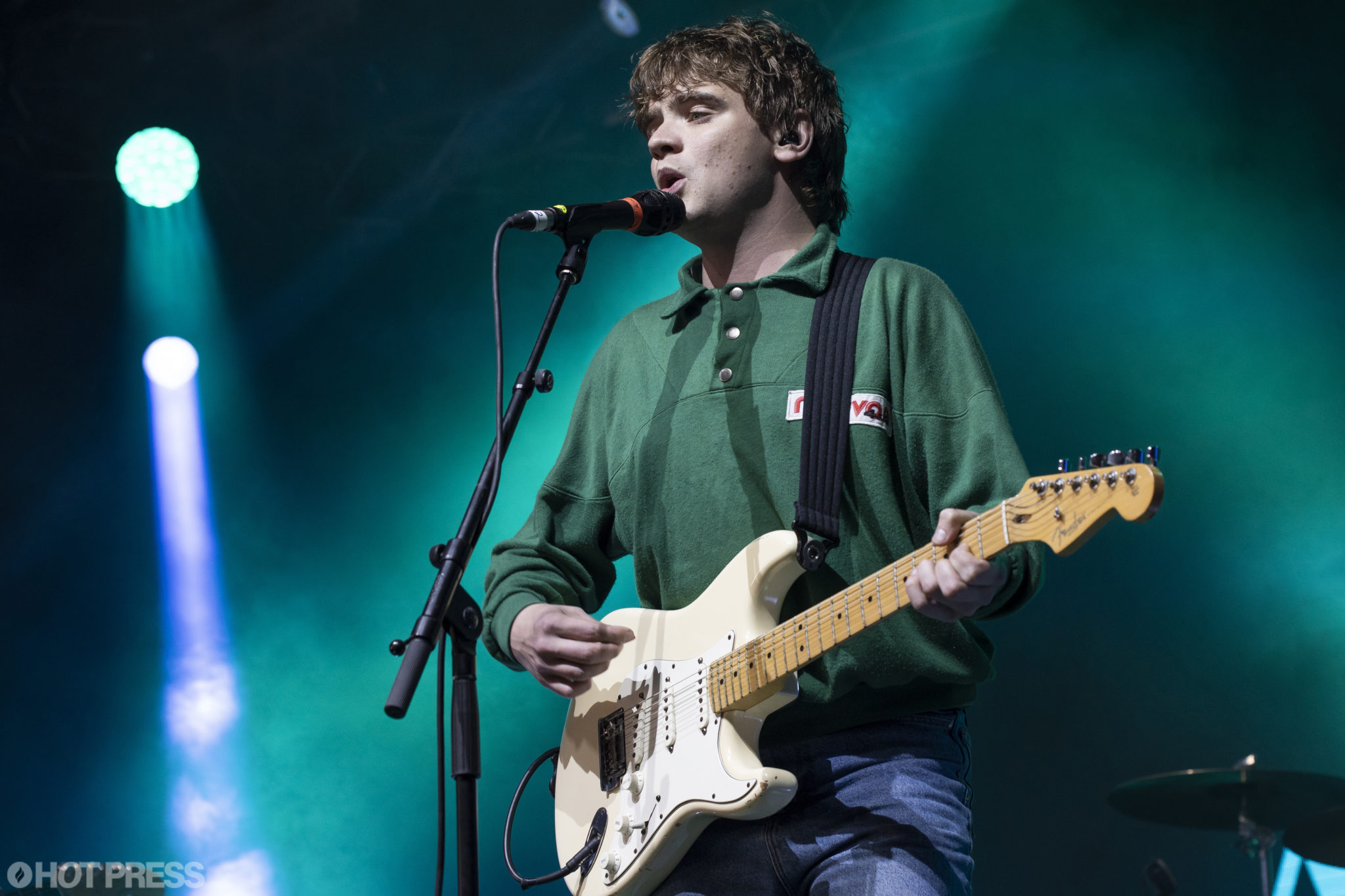 The Academic at Sea Sessions.

Depending on the time you walk down the pathway, you may see some golfers trying not to get distracted by thousands of slightly intoxicated festivalgoers (don’t book golfing in Bundoran on a Sea Sessions weekend unless you can handle serious pressure). You may decide to visit the town before entering the festival where you have a number of pubs to choose from, I highly recommend doing this if you are camping, as the atmosphere is amazing, and you might not see the inside of a building for three days if you don’t!

Upon entering the main festival site, you are met with a decision to turn right towards the Astoria stage (Techno music) and amusements (these offer amazing views over Donegal Bay and are very entertaining after a couple of drinks) or you can turn left to the main stage underneath the massive Ukrainian coloured (blue and yellow striped) tent. Depending on who was playing, I would swap between the two big stages quite regularly.

The outstanding completely dictated the energy in the room, Joel Corry brought us on a trip to Ibiza, Tinie Tempah got strangers dancing with each other as if they were lifelong friends, Kodaline made our partiers look like long-term couples for a brief moment in time, and every other act brought their own original vibe to the stage. 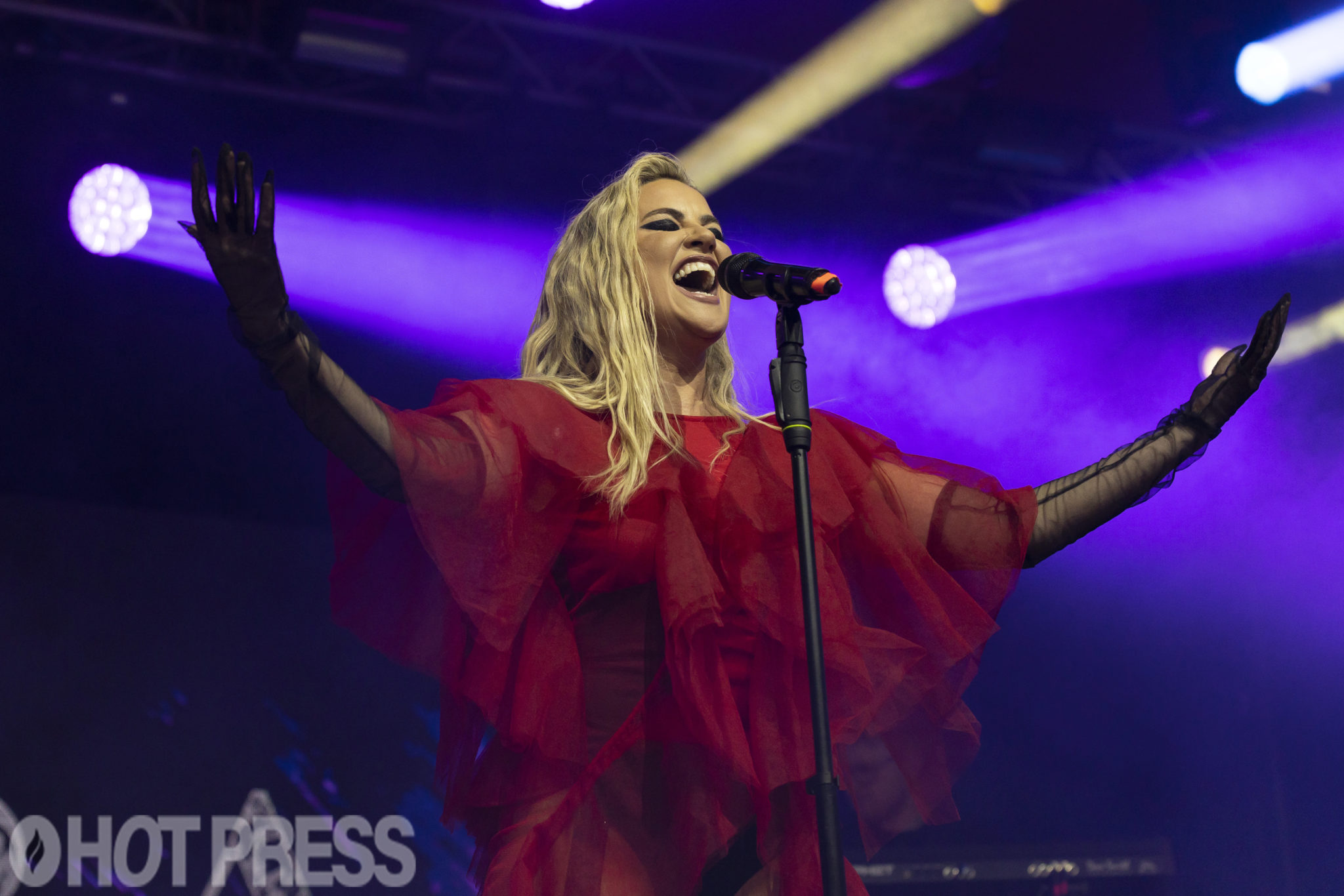 Beloved Dublin outfit Kodaline also used the weekend to launch their new acoustic album, Our Roots Run Deep. Their set rolled out the hits since their stratospheric rise in 2012 ahead of 2013's debut album In A Perfect World all the way to their more recent singles like 'Brother' and offerings from 2020 LP One Day At A Time and 2018's Politics of Living. Of course, 'High Hopes' was a poignant crowd pleaser for the ages. A well rounded set from a band that know their dedicated audience.

LYRA brought an especially powerful set, delivering belters like 'Falling', 'Lose My Mind' and 'Edge of Seventeen', her new dance banger with DJ John Gibbons. You can spot her immense vocals a mile off.

Gemma Dunleavy was the R&B standout of her night, her honey-toned voice and stage charisma building into a crescendo for her acclaimed hometown-inspired single 'Up De Flats'.

For Those I Love's David Balfe and Malaki had major crowds for their sets, both Dubliners procuring a huge reputation for their live energy. Equally magnetic with differing styles of music, Balfe curated spine-tingling emotion with tracks from his self-titled debut album like 'I Have A Love' and 'Birthday / Pain'. 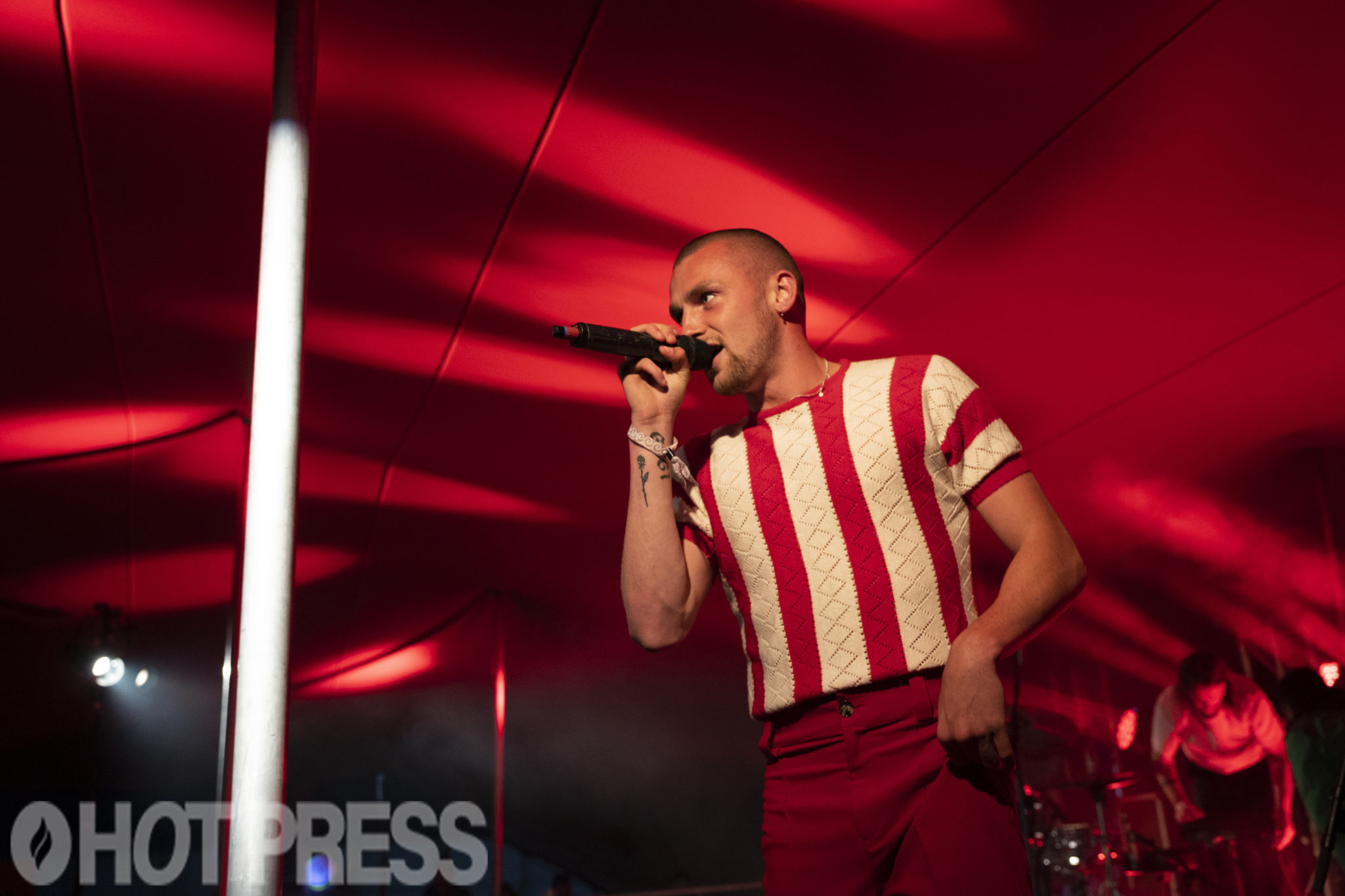 Meanwhile, Stillorgan hip-hop star Malaki tore up the stage with tracks from his 2021 EP, Don't Forget To Take Your Medicine, alongside a few 2020 numbers and an exciting forthcoming single. Both men leave absolutely everything on stage. Another highlight was Dublin-based Irish-Italian band Big Sleep, who played their recent hit 'Tutti Frutti', and The Academic - who always offer feelgood vibes.

Noise-rockers THUMPER have electric stage presence, with lead singer Oisin Leahy-Furlong wandering into the crowd for the ultimate rock star impact. If you haven't heard 'The Loser' live, you're missing out. Their recent album Delusions of Grandeur was a stomper. Same goes for The Scratch, who infuse trad, folk and metal together for a cocktail of sonic goodness.

When the music finishes in the main festival site (around 1am) you are yet again faced with a decision, to either get food and call it a night, or head to Paris (not the city, it is a nightclub in Bundoran). If you felt like you could do anymore partying, Paris was the place to be, with more party tunes, glitter and bucket hats for you to see before you called it quits.

The walk back to the campsite when everything finished up was especially challenging on the Saturday night when the Atlantic breeze was at its strongest and showers of rain were regular, but the good thing is, 10 minutes felt like 30 seconds at that time of night. 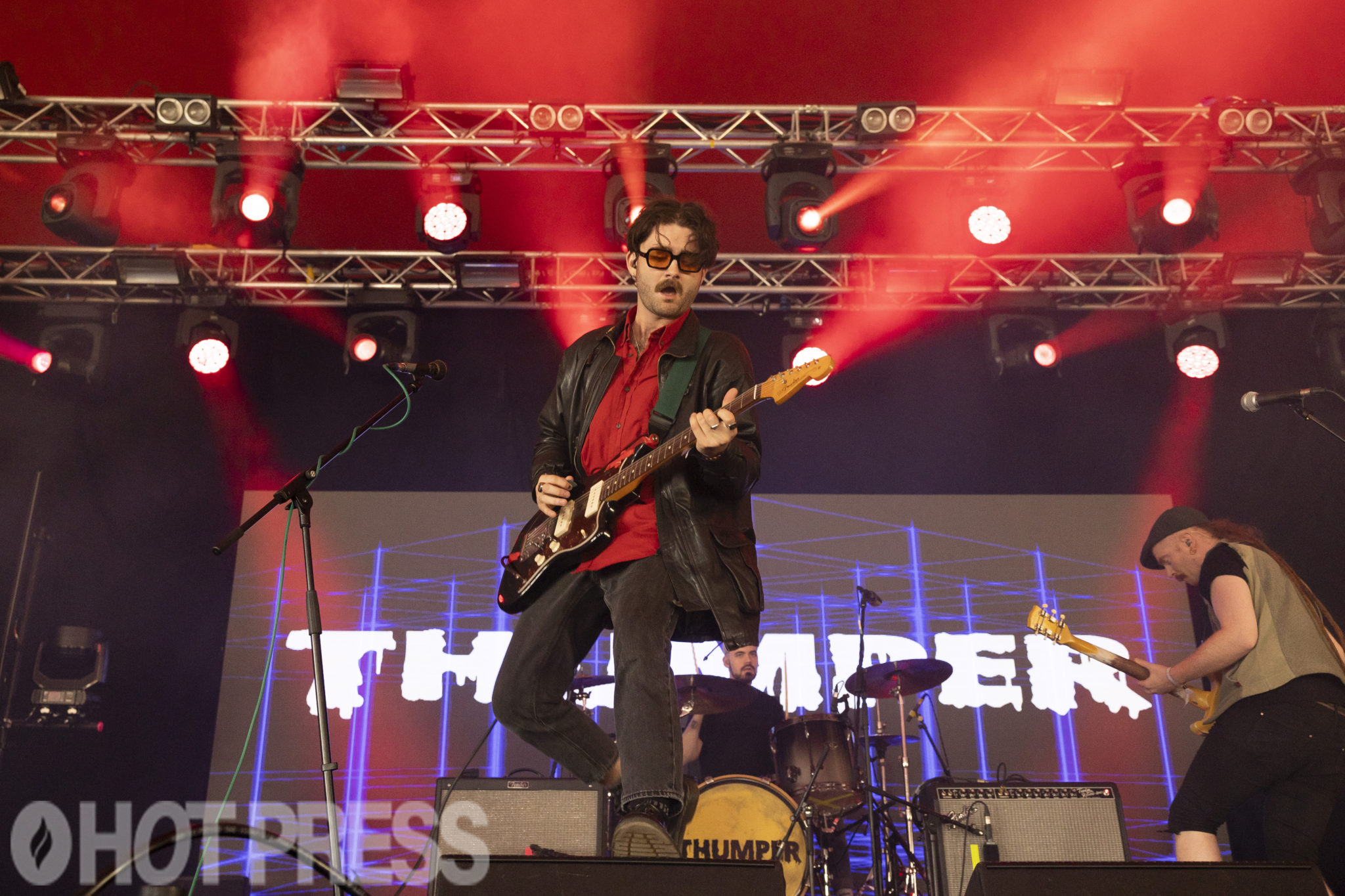 Upon arrival back at the campsite, it was a rush to whatever food van was still open to get a last-minute snack before bed. However, you would spot some die-hard partiers, cracking open a few more cans back at their tents before eventually getting some rest on whatever apparatus they set up for themselves when they arrived (this ranged from blow up mattresses and duvets, to sleeping on the floor, in a jumper, using a towel as a pillow).

This was the first camping festival I ever attended and while I know camping outside in the “unpredictable” Irish weather isn’t for everyone (you will probably get soaked, this is Donegal not Spain), I wouldn’t have taken a free room in a hotel if I was offered one. The buzz of the campsite is something that you cannot miss if you truly want to experience Sea Sessions, the festival is so much more than the music.

It's the beach, the wind, the tents, the mini speakers, the fizzed-up cans, the free Pepsi max and iced tea, the breakfast baps, the late-night hot dogs and most importantly the people who you get to share this experience with. Sea Sessions isn't something that you would want to do every weekend, but that is what makes it so good in the moment.