The final day of Longitude soared, with bang-up performances from drill sergeants Selló, Offica and Central Cee - plus a Kneecap frenzy on the Heineken Stage. With Jack Harlow, Playboi Carti, The Kid Laroi and A$AP Rocky on the Main Stage and Kojaque, slowthai and Becky Hill setting the scene on the other side of Marlay Park’s festival grounds; Longitude was powerfully put to rest yesterday.

As Dublin’s newest Dublin drill agent, Selló brought everything to the table for his early Main Stage slot alongside his clan of matching hypemen. The Clondalkin native kicked things up a notch with the rowdy ‘As Gaeilge,’ always reppin' his hometown and making it clear where his sound comes from.

“That’s my buachaill, that’s my bro,” he raps, knocking around the stage and directing this crowd to “open it up!” Selló easily controls the audience’s energy – likely because the rapper has been part of the crowd community himself. With electric guitar weaving psychedelic, intimidating basslines and live drums setting the rhythm, the authentic beat of ‘Process’ fused sounds of traditional Irish with modern, forward-thinking drill.

He seemed to know just what the Main Stage mob wanted and handed it to them, sleekly polished. He jabbed at the crowd, joking, “Did ye go to church today?” before torpedoing into ‘Irish Girls’ and his standout crowd-pleaser, ‘Oggie.’ Cracking live instruments added an authentic rhythm to Selló’s sound, building an impressive wall of an early-day performance. 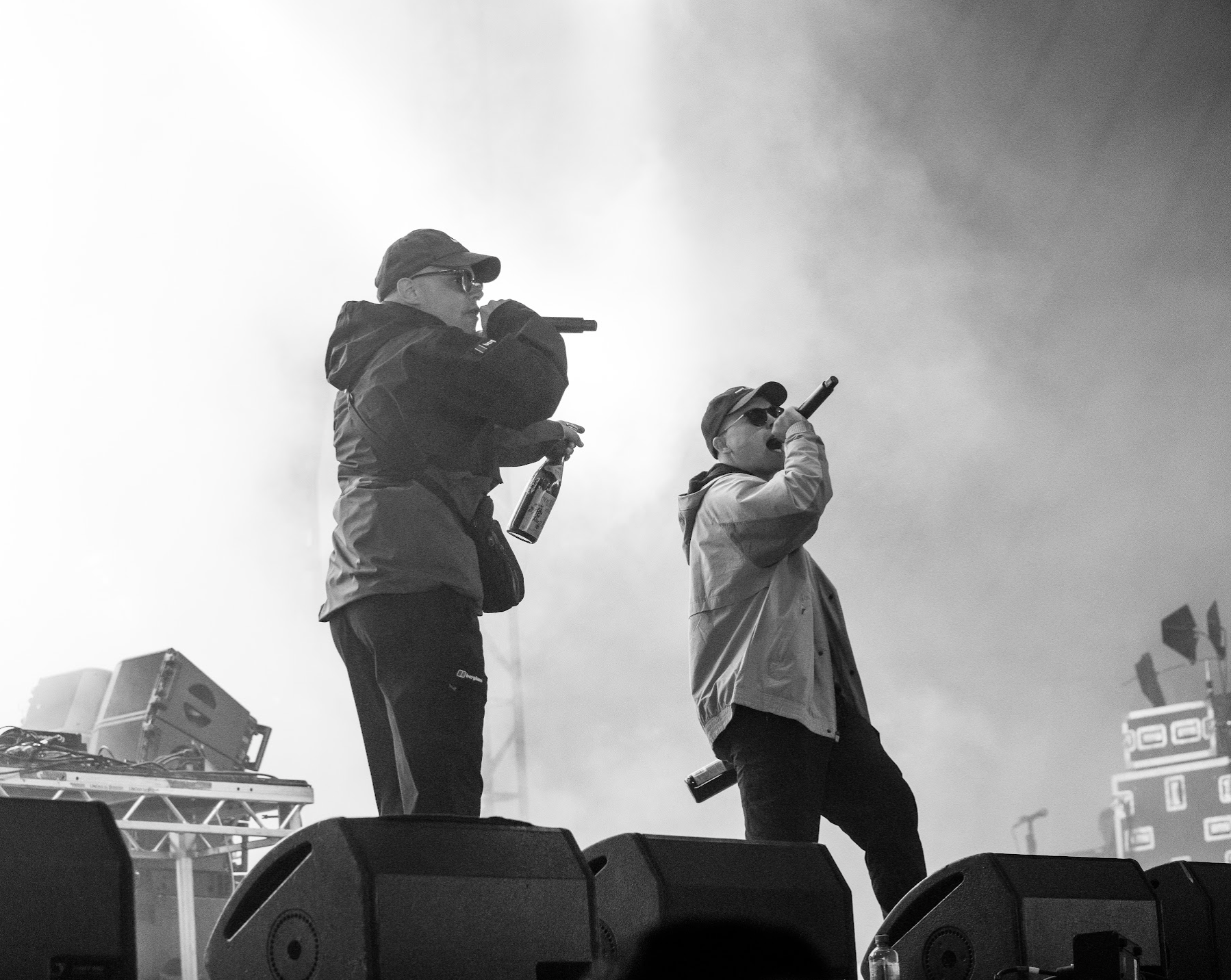 Across the grounds, the Heineken Stage teemed at half-past three with the buzz around rap trio, Kneecap. The West Belfast political lyricists didn't disappoint with their blend of Irish and English raps, leaving behind the riotous footprint of their presence. Charging the stage with their Buckfast and commanding the bursting audience before them, Kneecap traversed through fan-favourites ‘Get Your Brits Out’ and ‘Your Sniffer Dogs Suck,’ inciting a fiery scene with mosh-pits and collective screams of anarchy.

The wild outfit brought the energy of a punk show to their rap production, demanding “four more minutes of pure savagery and madness” from the crowd. In response, they eagerly chanted the chorus of ‘C.E.A.R.T.A” with a wild vivacity, leaving the whole tent in metaphorical flames. 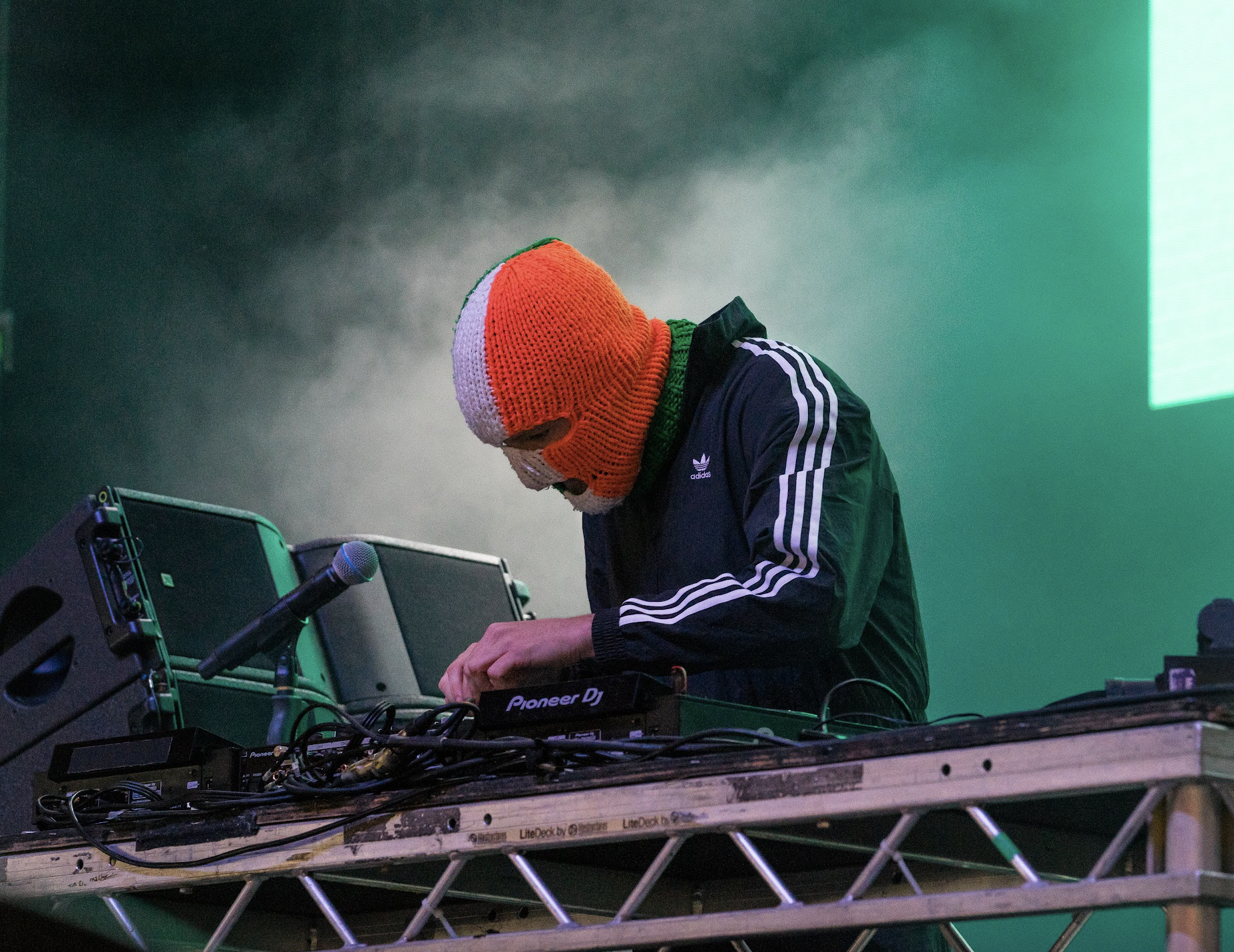 Elsewhere, Irish-reared, Nigerian-born drill star Offica proved a potent love for his hometown from the festival’s Main Stage. After pleading chants from the crowd, he arrived alongside his A92 Drogheda Drill Collective – his clan expanding to bring on special guests DBO, KSAV, KEBZ, BT, Nikz and Dre Boogz, to name a few.

With a reverberating bassline throughout his set that had the festival grounds shifting beneath our feet, anime visuals lit up the screen behind Offica’s exuberant performance. Along with his A92 dynamic, the rapper freestyle performed ‘Plugged In’ sporting an orange prison jumpsuit while fans chanted along to every line. The crowd was a ruthless sea of his die-hard fans, who matched the rapper’s intense energy, climbing to his level with every track. 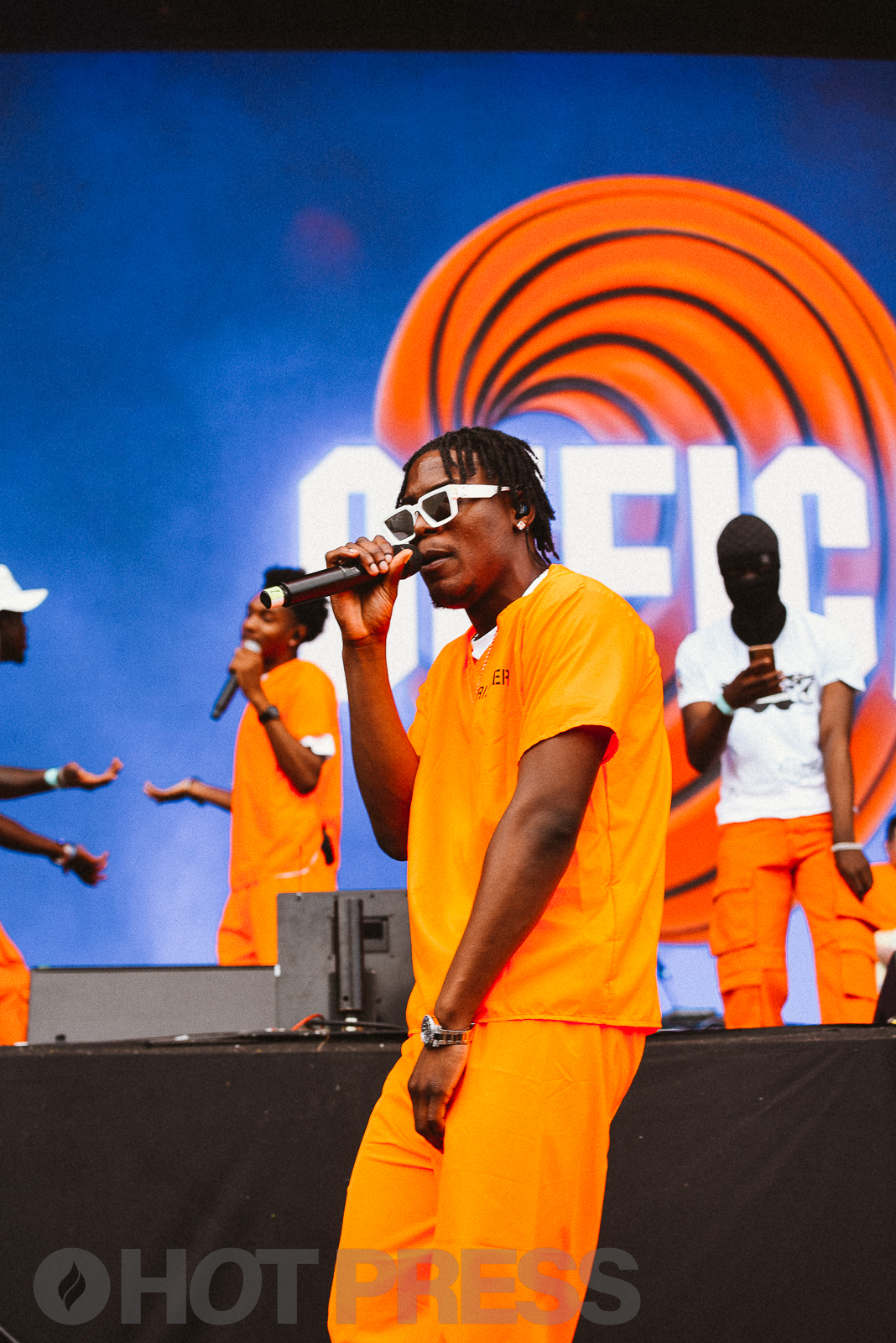 Standing by the Main Stage for Central Cee’s performance, we were warned before the ride took off – “You are now listening to Central Cee,” a voice announced. The 23-year-old London rapper kicked things off at a steady pace with his powerful single ‘Day in the Life.’ He moved swiftly from strength to strength, counting down before the bass drop that shook up the crowd on ‘Straight Back To It.’ The sun came out to shine just in time for ‘Little Bit of This,’ amplified by some dense, energetic drill production. Cee kept ‘em coming, a skill he’s proved keen at with his consistently fresh discography. 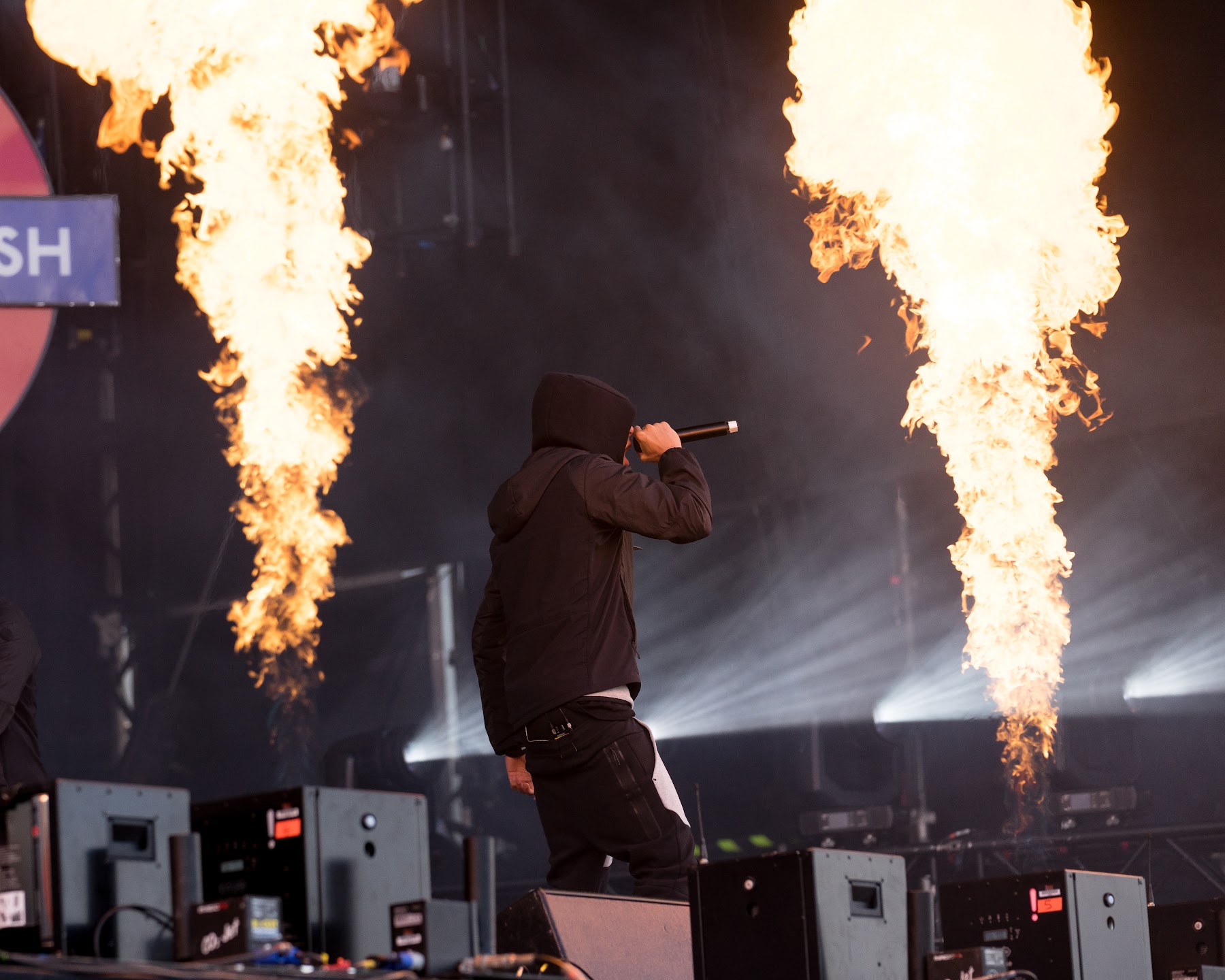 Kentucky rapper-turned-heartthrob Jack Harlow had an ironic request at the start of his anticipated Main Stage set – “You better scream,” he demanded, to an already shrieking crowd. Opening up with the flavourful ‘I Wanna See Some Ass,’ the international hip-hop star took a look out at the masses, wordless, before noting his Irish allegiance. “I feel like I’m back in the motherland, man,” he said. “I sent some of my DNA into this company and they said I’m Irish. So just so you know – I’m back home. It’s been about nine hundred years, but I’m back bitch.” 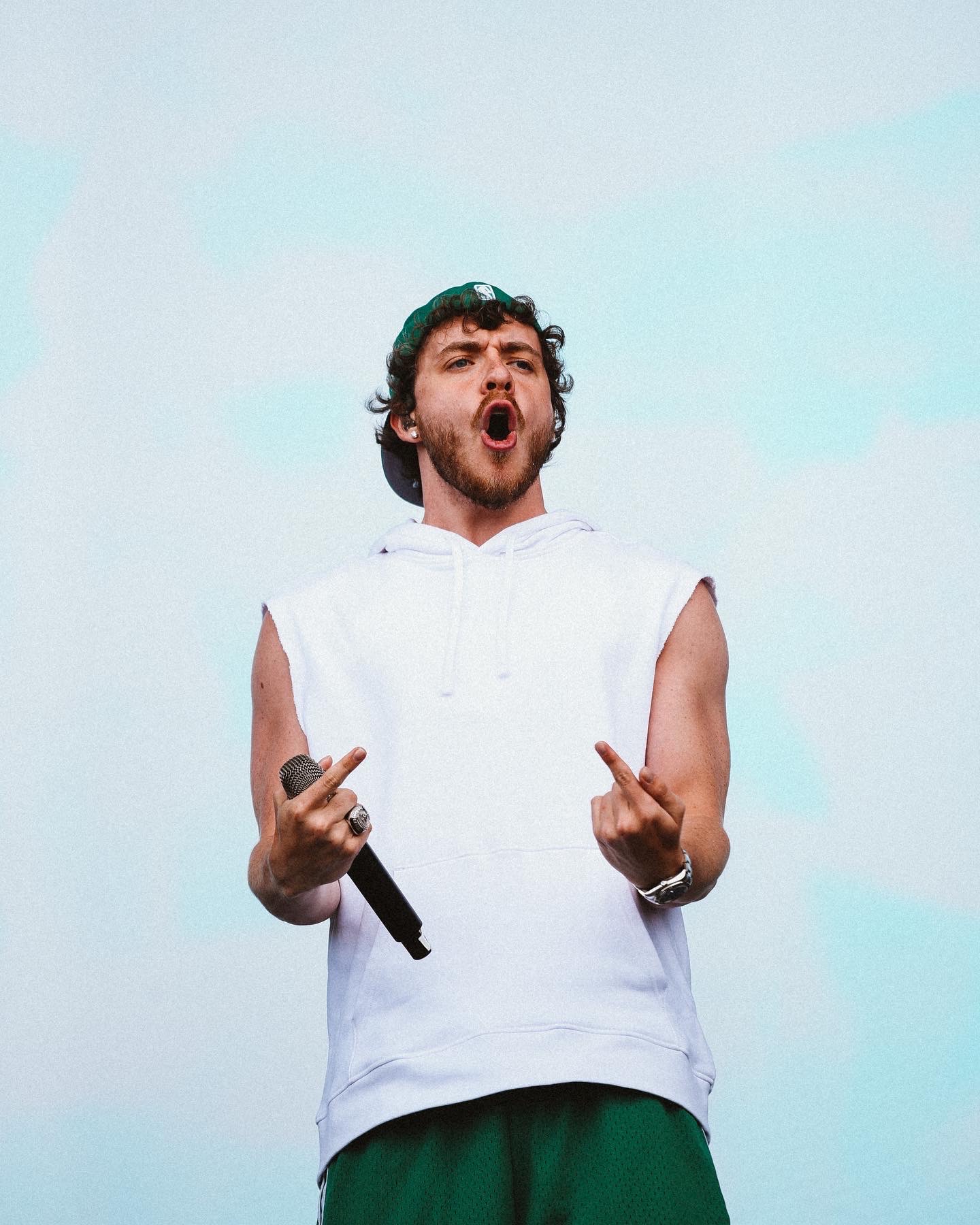 The beat switched up for ‘Young Harleezy,’ as the rapper told the story of his upbringing through some self-reflecting lyricism and his Harlow-brand charismatic energy. He stepped into his highest form, donning an Irish flag around his shoulders and jumping in unison with his energetic audience to ‘Side Piece.’ Horns crescendoed for the intro of ‘Nail Tech,’ delivering his catchy raps with a nonchalant, ear-snatching flow. He tapped into his melodic bag for ‘Dua Lipa,’ while overpowering bass on the bridge ate up every last bit of air in the Main Stage sphere. Finishing with his half of Lil Nas X’s ‘Industry Baby,’ the cheeky rapper left the crowd in high spirits for evening acts to follow. 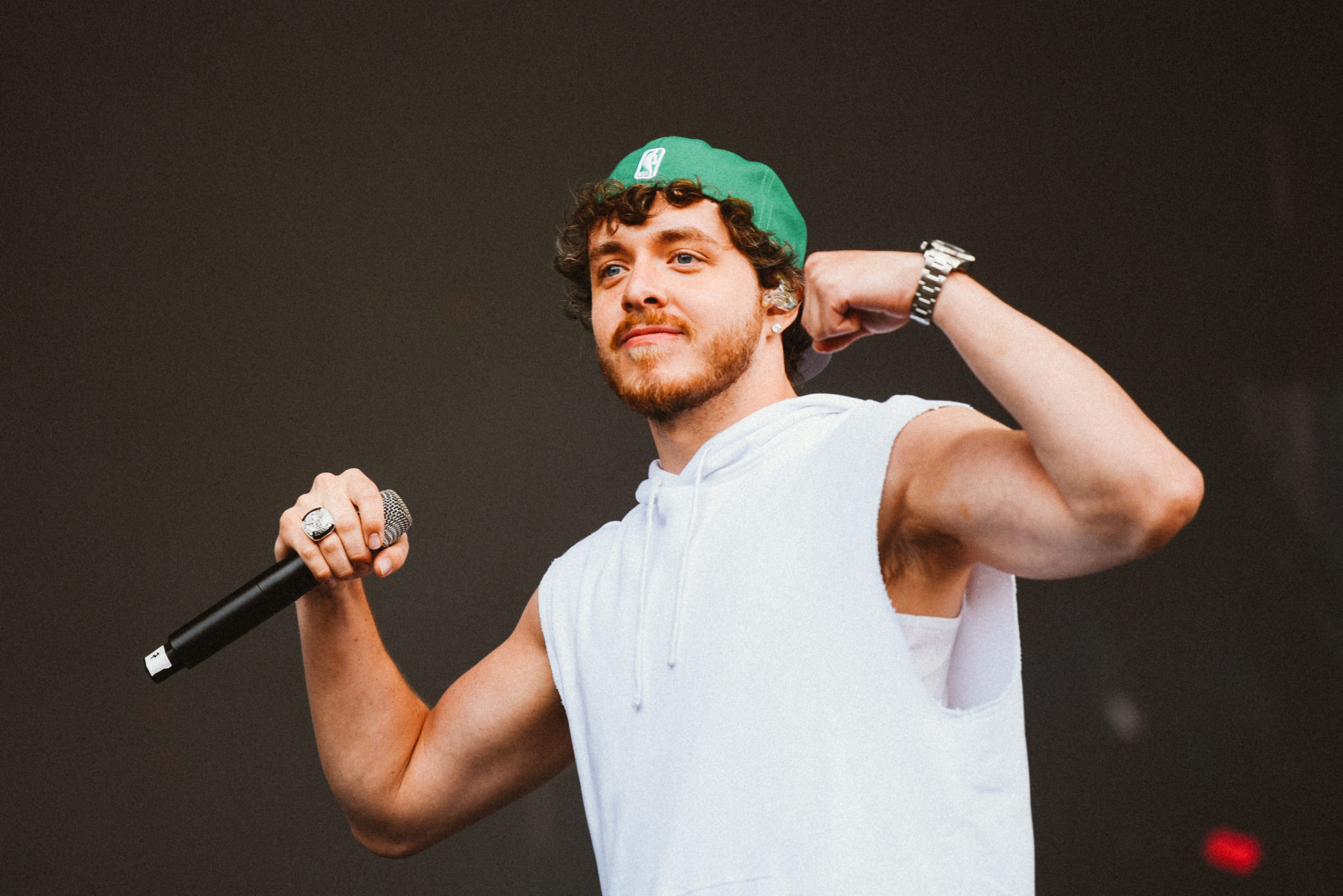 Shrouded in mystery, enigmatic masked rapper M Huncho produced a hazy scene within the Heineken Stage tent. The audience broke out in a collective chant, screaming, “Huncho Huncho Huncho,” as the trap artist took to the stage. He rode the intense wave of his myriad hits, from ‘Take Away The Pain’ to ‘Bando Ballads,’ swaggering around the stage platform with a cloaked confidence radiating from behind his known disguise. He extends an olive branch to his familial crowd, thanking them for being with him in the space, before exiting the stage, leaving the euphoric after-effects of Huncho’s kinetic energy. 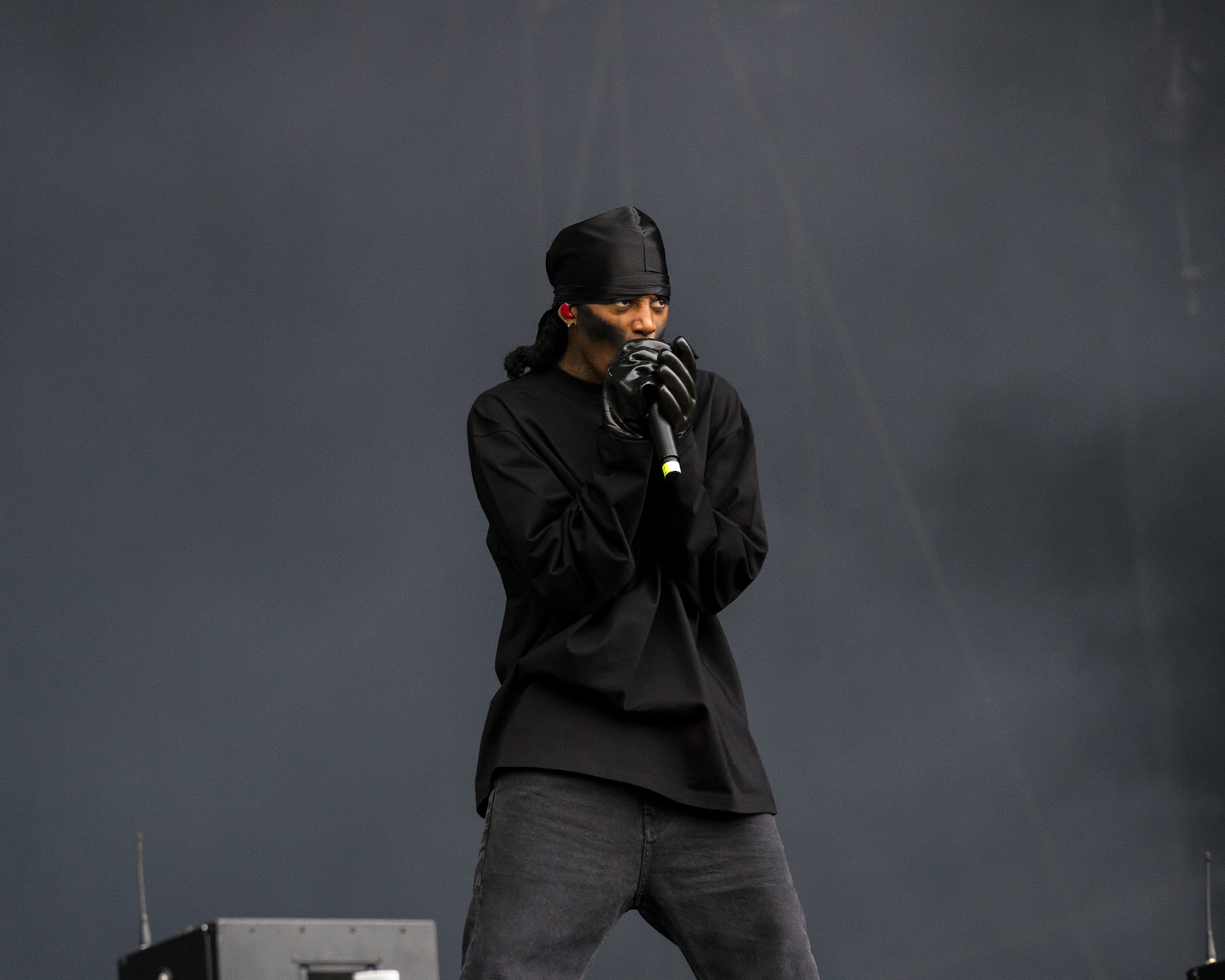 His presence menacing in the most lustral way, Playboi Carti’s descent upon the Main Stage commenced with the rapper’s exorcist animal shrieks. His whole performance manifested into a cathartic release for both audience and artist alike. He emerged in gothic garments with B&W etched visuals decorating the plasma screens, fog shooting into the air for the havoc-wreaking track ‘Sky.’ The rapper spins in tornado fashion, letting his guitarist take the spotlight for a screaming electric outro. The Atlanta hip-hop visionary keeps pushing for ‘Can’t Sleep,’ inciting chaos as he sings, “When I go to sleep I dream about murder.”

Anthemic guitar riffs spiral into ‘Control,’ as Carti instructs his crowd to “back the fuck up,” recalibrating them to absolutely lose their minds for the chorus. He lights the flame from minute one, bursting into a grand finale for the explosion of ‘Shoota,’ leaving the crowd to handle the intense sugar rush of Playboi Carti’s live immersion.

Fresh off his ‘21 Dublin-drawn record Town’s Dead, Kojaque had a tight-knit bunch riled and ready for his evening slot on the Heineken Stage. The Cabra rapper builds the pace before the whole set tips over for ‘Heartbreak,’ which incites a stream of relatable screams from his expansive crowd. He amped up the energy on ‘Shmelly,’ bounding around the stage in high spirits to the saxophone underbelly of the track. He gets nostalgic, recalling his set at Longitude back in 2019 and then waving through more melancholic tracks ‘That Deep’ and ‘Wickid Tongues.’ 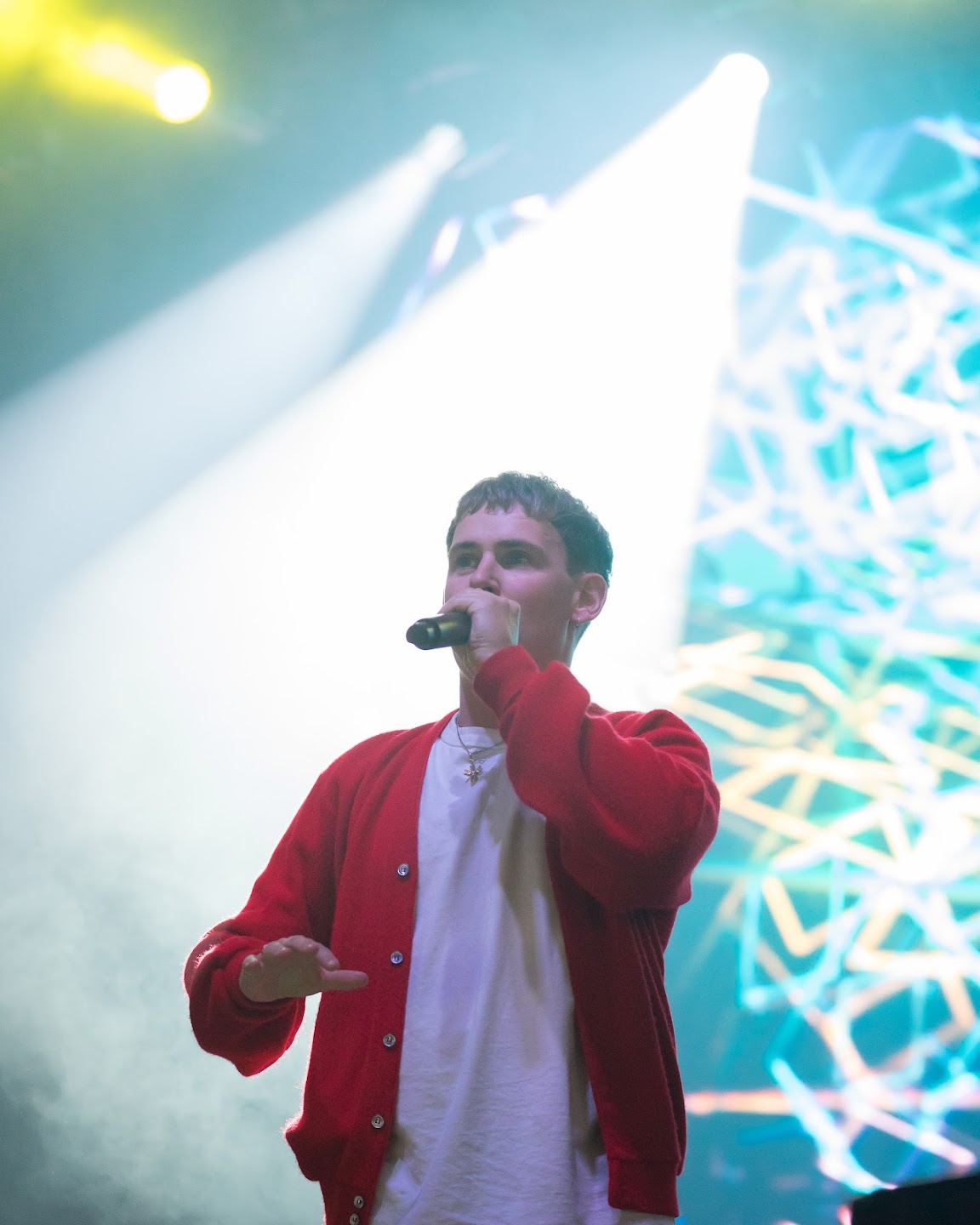 The crowd moves to the sweet-sounding rhythm of ‘No Hands,’ before Kojaque is joined by DJ Kean Kavanaugh for ‘Eviction Notice.’ Their intimate dynamic is brotherly, as the pair leaps atop one another and the crowd cheers along in saccharine support. “We’ve done the sad ones, let’s get to the sexy part of the show,” announces Kojaque, standing true to his word and following up with ‘Sex N’ Drugs.’ He lept into the crowd as Luka Palm backed him up for the duo’s ‘19 track, ‘Date Night,’ energising his already buzzing crowd even further. The set capped off to his record’s title track ‘Town’s Dead,’ an abrasive, frantic, and overall glorious set closer that left the tent hazy with its rainbow of vibrant sonic colours. 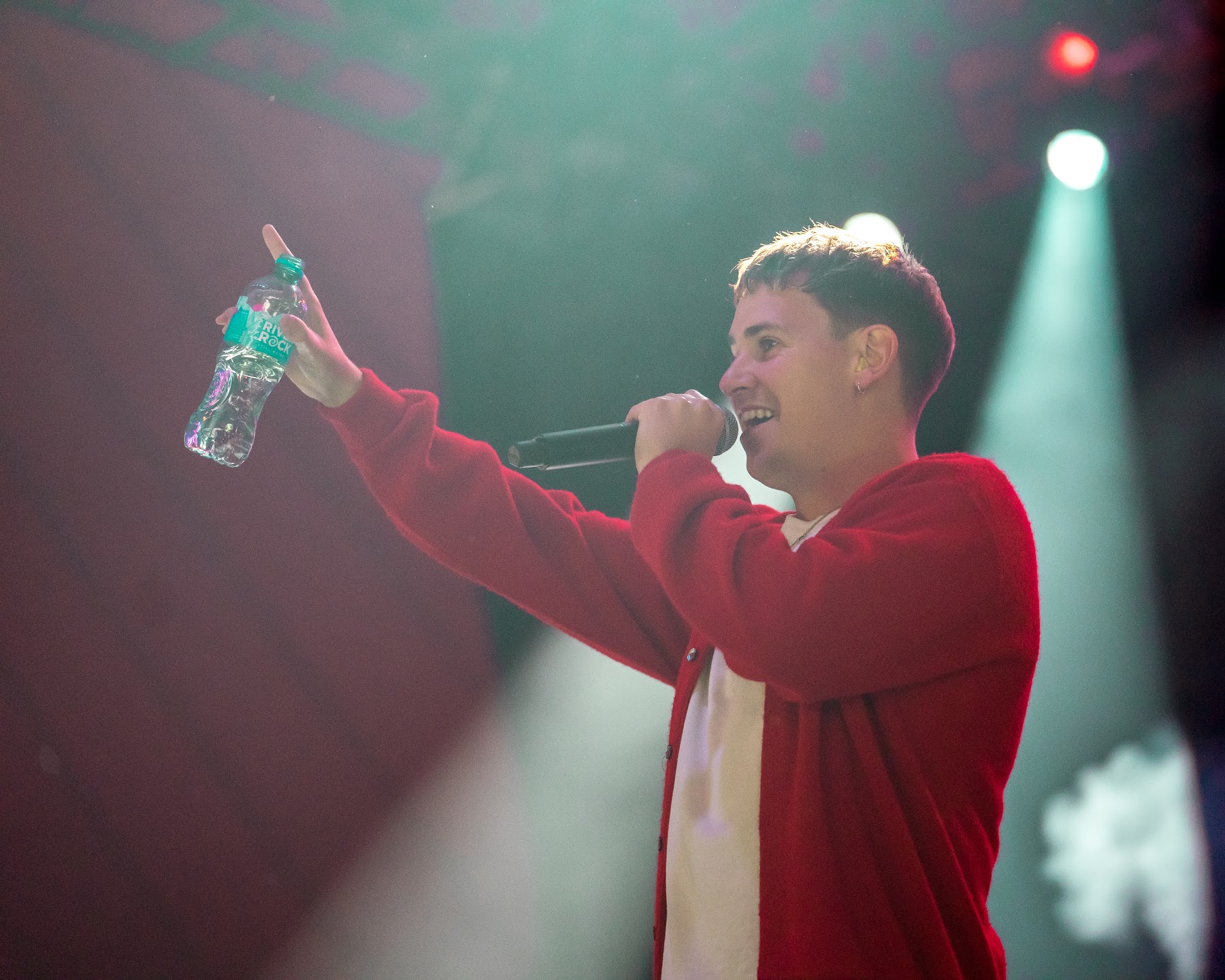 The DJ set before slowthai’s grand entrance onto the Heineken Stage hyped up the audience, with sprightly mixes of Pop Smoke’s ‘Dio’ and ‘Mo Bamba’ by Shek Wes. The raffish rapper thrashed onto the stage, immediately air-punching and directing the audience to make the mosh pits bigger. As he downed a pint of beer, the crowd chanted, “We like to drink with Thai because Thai is our mate! When we drink with Thai he gets it down in 8, 7, 6, 5…”

A reverberating bassline sends the grass shaking, designating the front of slowthai’s crowd as the place to be for hardcore, manic fans of the rapper’s insane slew of headbanging tracks. ‘Dead’ had the rapper and audience alike screaming at one another in delirium, as the solo frontman, tattooed and exposed in a pair of cutoff shorts, vibed to the unique, blended sound of his own creation.

The Northampton rapper commanded the crowd with easy authority, splitting the sea into team A and B and wreaking havoc, instructing each team to show explicit chants in the face of the other. His energy was infectiously raucous on ‘Psycho,’ with ear-shattering bass transforming the entire tent into one, explosive mosh pit. “I believe in myself and everyone else can fuck themselves,” chanted the rapper, showcasing a rare live connection with his die-hard fans. The intense beat drop of ‘TN Biscuits’ was exemplary of slowthai’s vehement vibe, as shoes, cups and the occasional willing body went flying around the air above his electrified crowd.

Holding a wayward shoe to his ear like a phone, slowthai announced his raucous last track, ‘Doorman' (feat. Mura Masa).

“I fuckin’ love ya Dublin, with all my fuckin’ heart,” beamed the rapper, before walking offstage to ‘Barbie Girl,” proving that it is possible to keep an epic, turnaround show thriving long after it ends – and that a crowd like his can find a way to mosh to anything. Even a girly ‘90s eurodance hit. 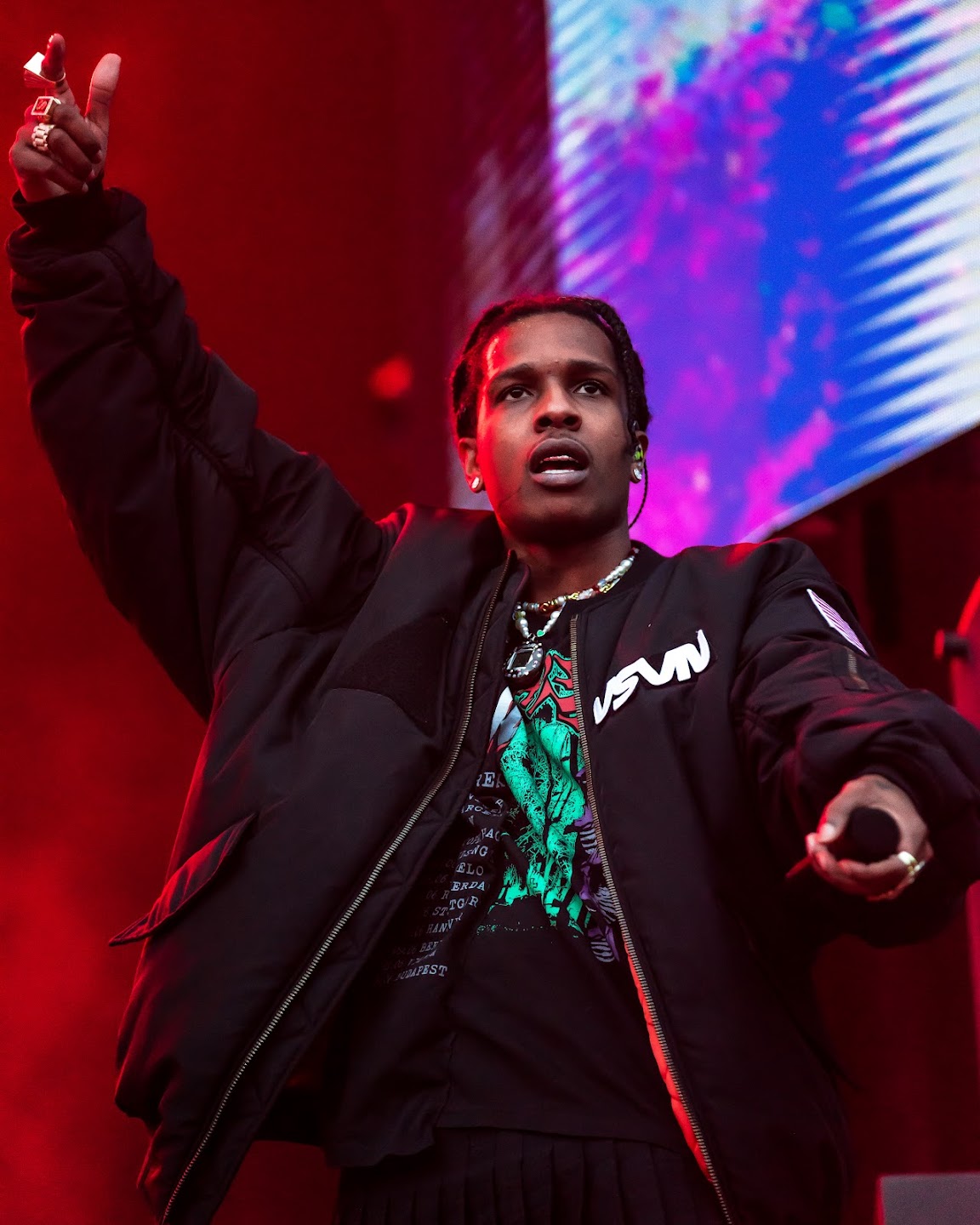 Listening to A$AP Rocky feels like entering a sonic vault – but his live show is a surreal universe in itself. Finally uniting with his Longitude crowd after missing the festival in 2019, the rapper launched into banger ‘Praise the Lord (Da Shine),’ the Harlemite stormed the stage with an energy as fervent as his screaming, mobbing audience. He was a musical dynamo, meeting expectations and then exceeding them by a thousand. He forged an undeniable connection with the masses of his crowd, wearing a knee-length black skirt as he incited chants of “Olè” and warmly declaring, “Everytime I come to this country y’all sing that shit, I love you all. But this is gonna get wilder than a football game, you know?”

The Harlem rapper brought out slowthai for 2021 TYRON single ‘MAZZA,’ inciting cheers of delighted surprise from the crowd at seeing the two anticipated stars unite. The perfectly-formed, aggy track saw the rappers singing and dancing to the flowy synth beat, weaving their way through dense lyricism with a contrastingly carefree attitude. With slowthai’s flow and a catchy, grabby hook, the performance of the track alone and the crowd’s bursting energy would’ve been substantial for the weekend’s finale. 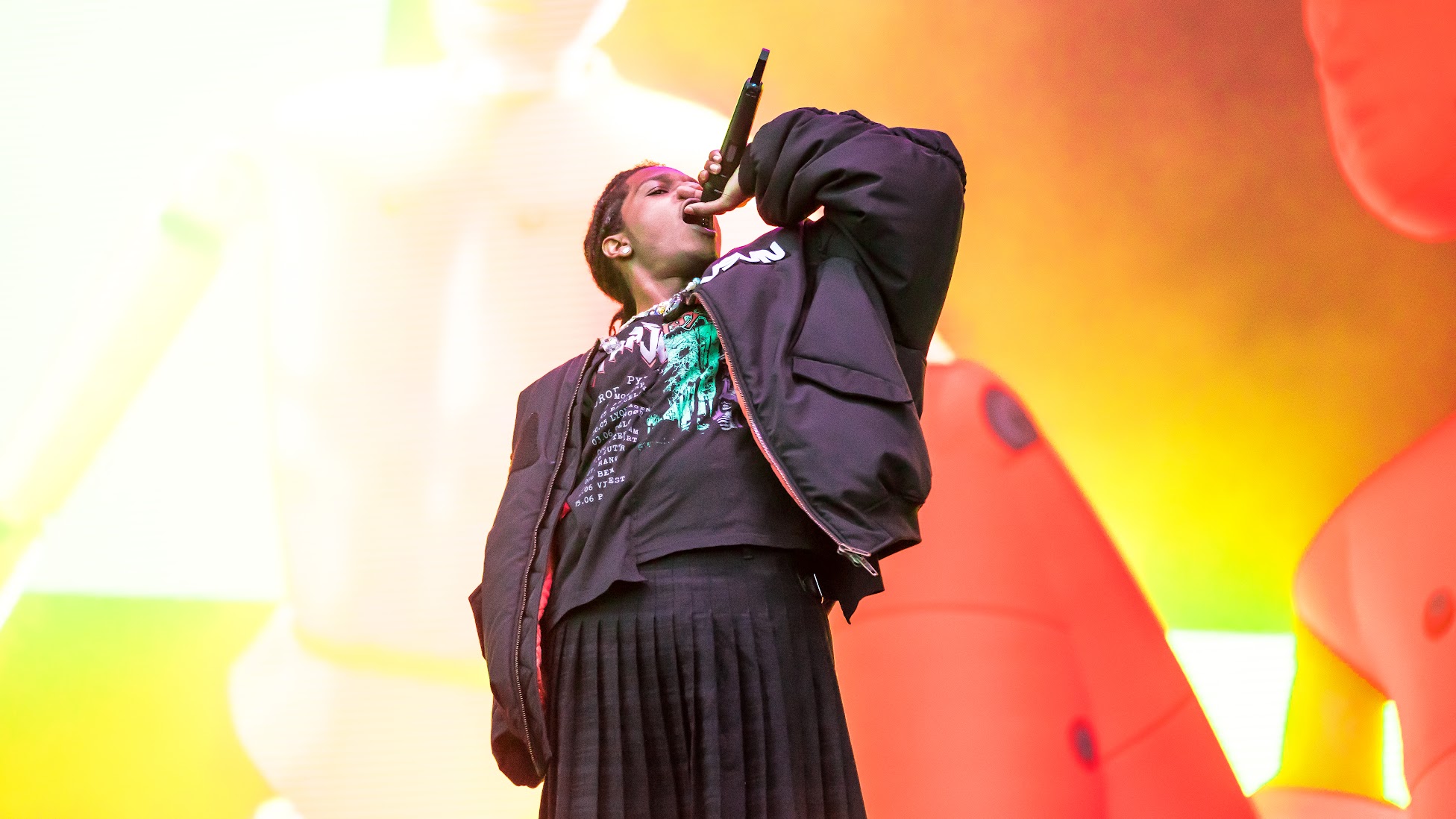 A$AP got down on a boom speaker for his last and final track, level with his crowd as he demanded they open up the mosh pit. A roaring bassline immediately cut into ‘A$AP Forever.’ The rapper leaped onstage under maniacal flashing lights, framed by bursting flames of fire.

The ecstatic sounds of a fading set, backlit by the fading Irish sky were the picture of a glorious end to a heavenly weekend at Longitude’s 2022 Festival. The artists came, they worked with effortless execution, and they dazzlingly conquered – leaving enough hip-hop heart behind to hold us over until next year.