Whether you're a fan of country, rock and roll, or indie pop, Freshers Ball Pre-Drinks at Trinity College had it all, with emerging artists Fizzy Orange, Last Apollo, Red Heron, International Love Brigade and Los Ramblerosos raising the roof at the Pav Marquee.

TCUSU ents officer Max Lynch, a Computer Engineering student, was tasked with organising the event, which provided a social outlet for students among their lectures. This, he said, meant bringing the Pav Marquee, a large white tent outside the Pavilion Bar in College Park, back in an even bigger way than last year.

"Over the last two weeks, I've been working 9am to 3am every day, and we've put on about 30 events, roughly. They've all been sold out," Lynch said. "I'm really looking forward to this, because we have lots of really, really good Dublin talent coming in. And they're all lovely, lovely people with a really nice sound.

"Trinity Ents needs to be used as a platform to promote smaller artists and talent within the college. There's about 18,000 students in this college and it's really hard to give everyone a platform but we're trying our best to create as many opportunities for people to get recognised as possible because there's so many people in Trinity who deserve their shot."

He added: "I just want to say a big thankyou to 48mobile as well, who we've been working with and they were able to give us the funding to supply a backline for the bands today, so it wouldn't have happened without them."

It's save to say that the event was a success. Kicking off the live show just after 5pm were four-piece Los Ramlerosos, lead by vocalist and self-proclaimed "washed up country musician" Ryan McDonald aka Mossy Ryans. His deep, rich vocals, accompanied by Lucy Rice of Last Apollo on violin and Sam Armstrong on drums, really stood out during hits such as Johnny Cash's 'Folsom Prison Blues' and 'The Devil Wears A Suit And Tie' by Colter Wall.

Next up, International Love Brigade entertained with rock and roll tunes and debuted a brand-new song, and Red Heron raised the energy with some of their rocky originals. The four lads are definitely ones to watch. 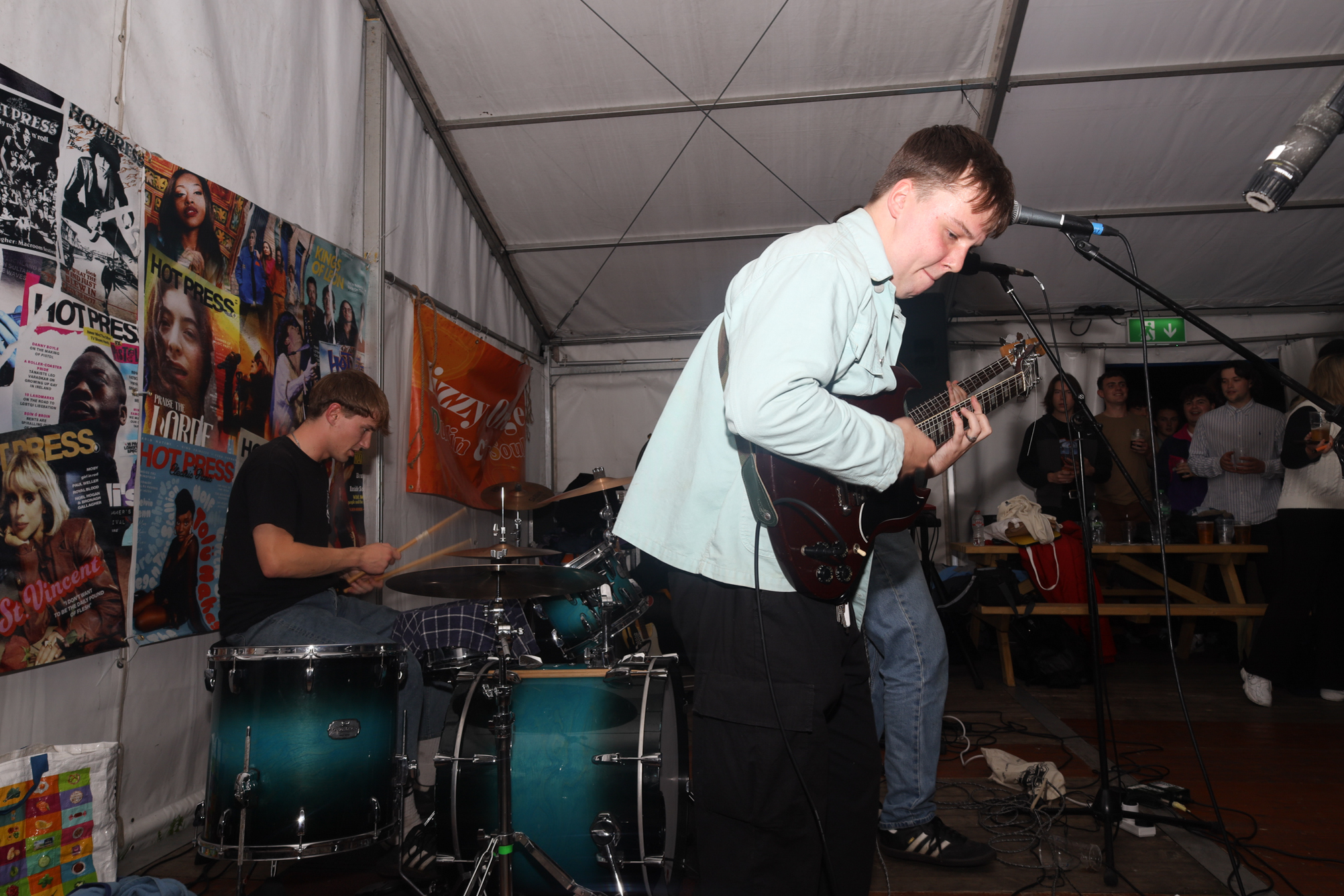 The evening was very much a team effort, featuring multiple collaborations and musicians playing in more than one band. Drummer Sam Armstrong, a fourth-year Music student at Trinity College, was one of them, performing with International Love Brigade, Los Ramblerosos and Last Apollo.

"I was nearly playing four gigs today, but I thought three would be enough," he laughed, adding that they are "surprisingly ready for this", having rehearsed for a couple of weeks. "We've been cutting songs all day and it's really difficult because we really love all of them. It's like abandoning a child or something like that," he joked.

"I'm really enjoying having the opportunity to play so much music on campus. I haven't really experienced a gig like this before - it's really promising." International Love Brigade have big plans, Armstrong enthused, saying that they are looking for supports for their upcoming gigs. 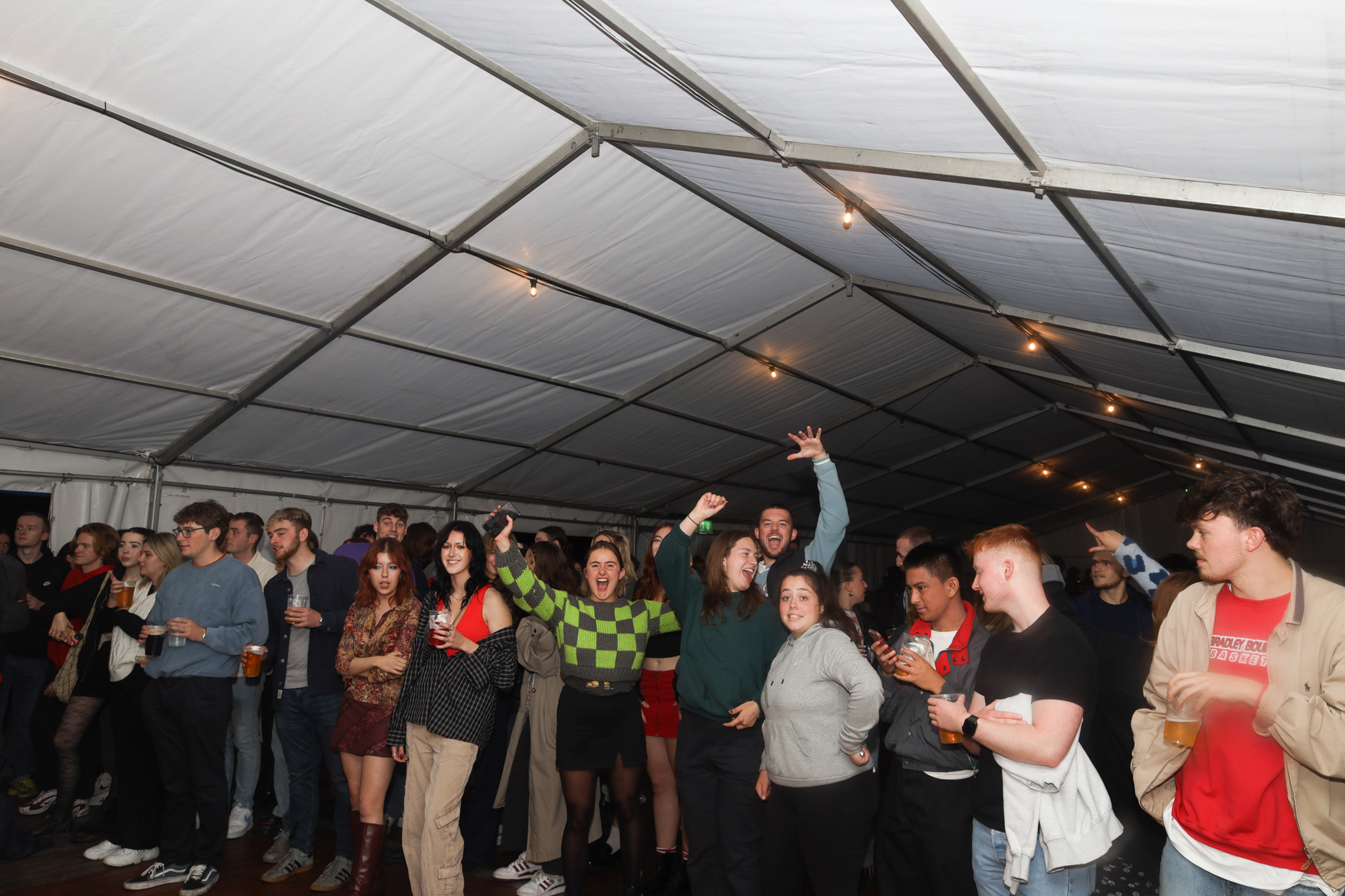 Dublin indie pop group Last Apollo delivered another stand-out performance of the night, playing songs from their debut EP Ordinary Matter, which was released in July of this year, as well as the unreleased banger 'Dizzy Brain'. Lead singer Lucy Rice's vocals particularly shone on their latest single 'Reservoir'.

A Music student at Trinity College, Rice detailed how thrilled she was to play this gig. "I'm in fourth year - it's very exciting to get to do something like this in my last year of college. It will be really fun to play, especially for new first-years. It's just a really good way to get a lot of people to hear you really fast," she said, adding that it was a privilege to perform in the Pav Marquee.

What's next for Last Apollo? "We're playing Irish Music Week, which will be fun and we just opened for Sammy Copley, which was good. We're opening for some other people, but I can't say who yet, and we're playing Bintfest with Anon Records as well." With eight new songs in the works, Last Apollo fans have plenty of new music to look forward to.

The night ended on a bang with five-piece soul-pop band Fizzy Orange making the crowd break out their best moves on the dance floor until 10pm. But the fun didn't end there. Many students headed to The Academy for Freshers Ball with Mella Dee, where English DJ and record producer Ryan Aitchison, known professionally as Mella Dee, played till the early morning hours.

Find out more about Trinity Ents here and on their Instagram page.