Following Sigrid's 'Cosy Tour' of Ireland, the Scandinavian pop superstar lit up Dublin's 3Arena to conclude her tour with a bang.

Norwegian singer-songwriter Sigrid ended this year’s stretch of her long-awaited tour in Dublin’s 3Arena on Thursday, 24th November, and what a night it was.

Her opening act was Lea Heart, who was announced by an answering machine message before hitting the stage in a purple sequinned outfit. The 20-year-old performed for the first time in the 3Arena with several hits in her arsenal, including a cover of Lily Allen’s ‘Not Fair’ and her own single ‘IDK Why’ before ending with 2020 hit, ‘Older.’ 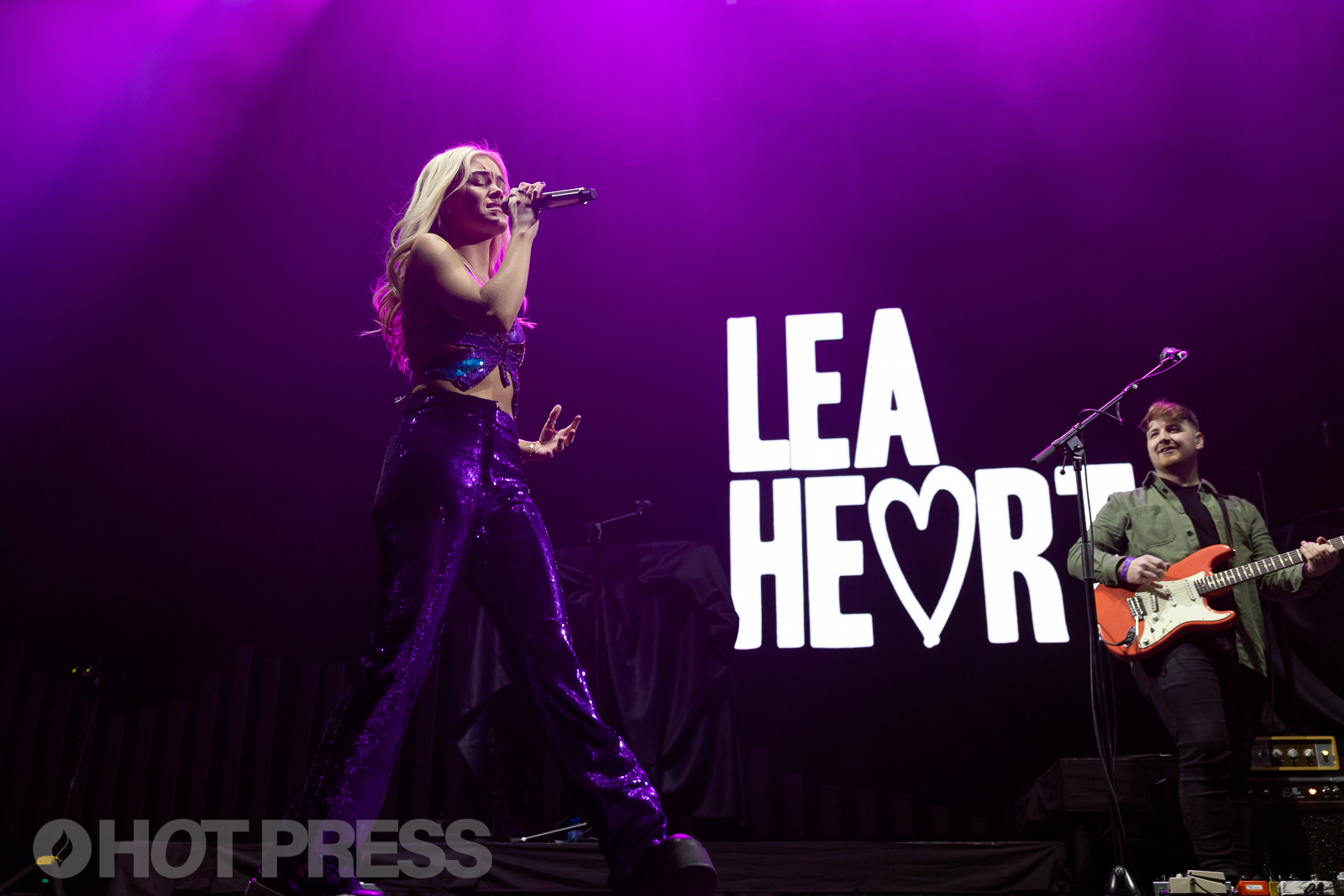 The Kildare singer-songwriter took the opportunity to announce her first headline show on the 2nd April 2023 at the 3Olympia Theatre, Dublin. Tickets, which went on sale on 25th November, can be purchased via Ticketmaster.ie.

30 tense minutes passed before Sigrid stepped out of a cool facade of smoke that had filled the stage. As she announced her presence by crying out “Dublin,” the intro to ‘It Gets Dark’ built in the background. The singer exploded into song, dancing across the stage in her usual bubbly, electric fashion. Her guitarist, Sondre Abrahamsen, went on to playfully hijack the bridge with an electrifying guitar solo which rippled through the arena. 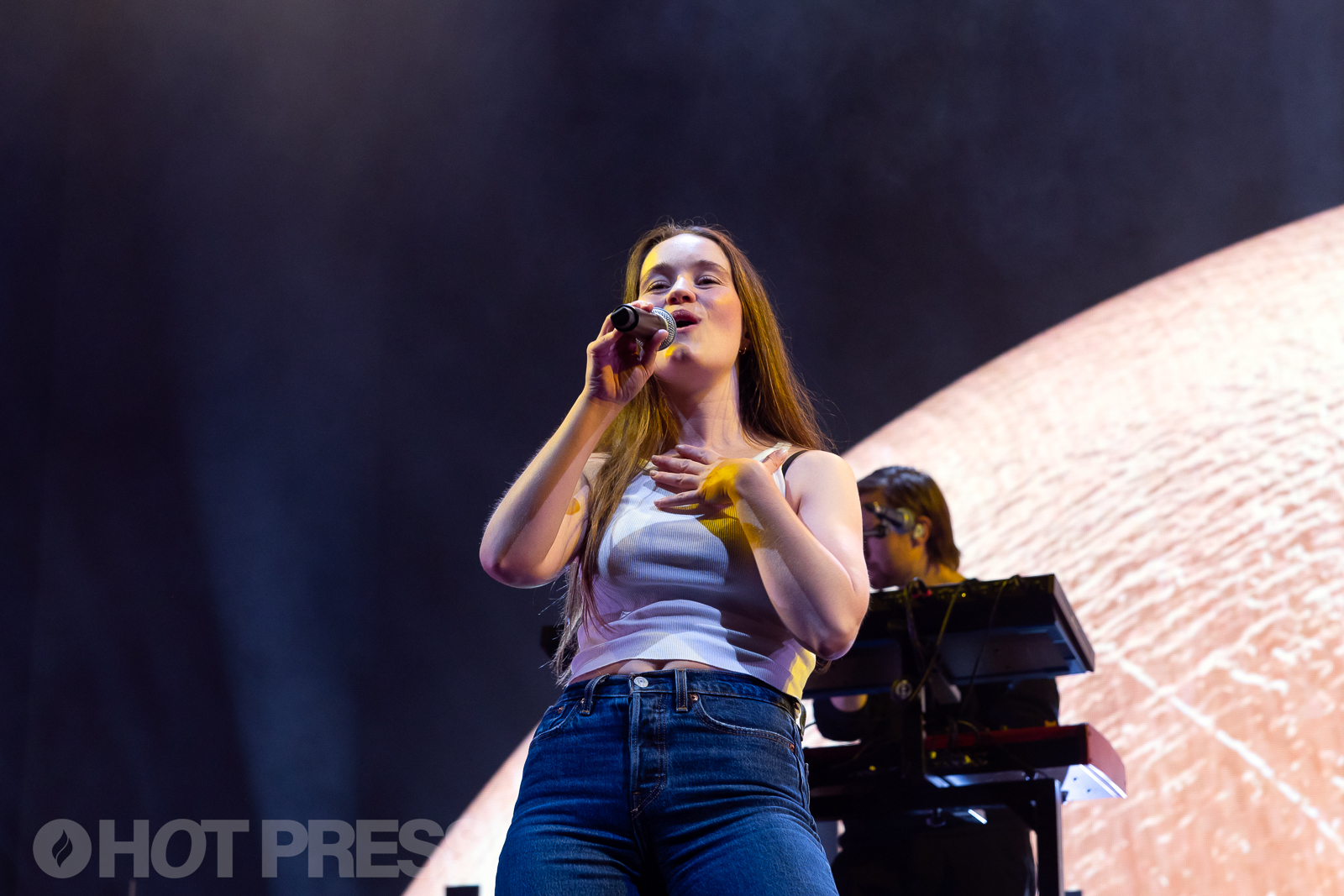 The atmosphere was charged as she launched straight into her next hit, ‘Burning Bridges.’ Asking for the audience to help, Sigrid initiated a dialogue with the crowd, tossing the lyrics of her bridge section, ‘You cry, they don’t/ That’s how, you know,’ back and forth. The track ended by transitioning into a techno-dance instrumental bit.

The 26-year-old stood on stage for the first time to address her audience. “I can’t believe we’re back in this arena. I'm so, so honoured. Thank you a million.”

Grabbing the chance to introduce her band, she launched into several more songs which included ‘Risk of Getting Hurt’, ‘Sucker Punch’, ‘Thank Me Later’ and ‘Head on Fire.’ Each one demonstrated the singer’s impressive vocal range; belting sustained high notes, and frequently decorating her notes with seemingly endless runs.

Addressing the intimacy of her Cosy Tours, Sigrid takes advantage of the moment to transition from her traditional poppy dance hits, into a more emotional down-beat set. 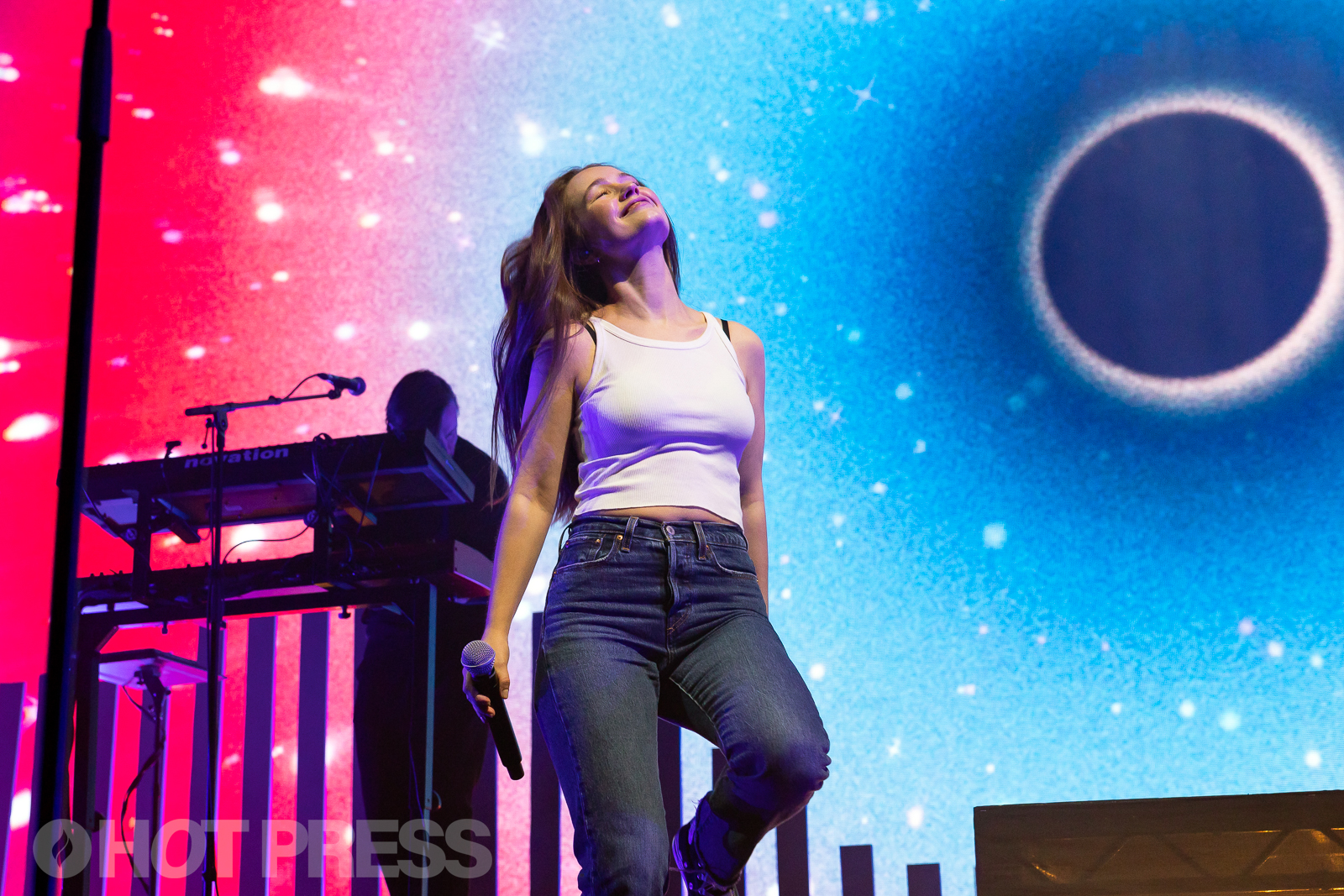 “Are you ready for some ballads?” She asks, as she gets ready to take a seat before her keyboard. “Time to get the phones out,” she joked. But sure enough, phones soon twinkled like stars in the upper stalls of the arena as those with torches waved along to the melody of ‘Dynamite.’

Lit by a single spotlight on stage, the Norwegian-native gave a clearly emotional performance, as she drew upon each note with a moving conviction. Tinged with a sense of sadness, Sigrid’s vocal echoed hauntingly and hollow throughout the hall.

Her poignant ballad was met with sustained applause which bellowed throughout the Dublin arena.

“I don’t know why but I've always felt so welcome in Ireland.” she admits following the applause. “I always joke I might move here,” she added, expressing her appreciation for the warm reception and soft spot for the Emerald Isle. 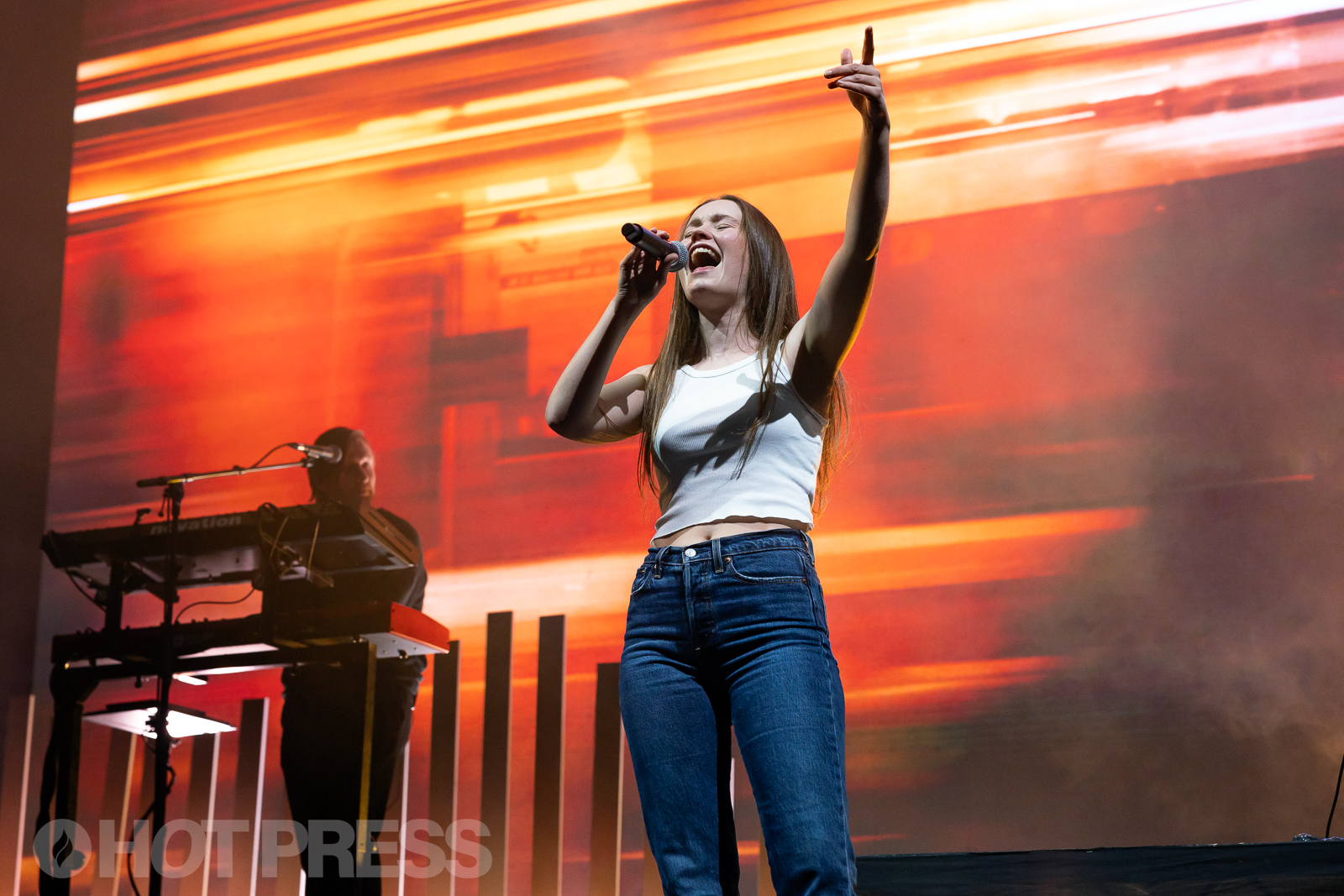 She swiftly transitioned into a meaningful rendition of ‘Bad Life’, followed by an acoustic version of her new release, ‘Blue’, which until now, had only been performed on her Cosy Tour gigs. Her new song was a definitive shift away from Sigrid’s usual style, and could almost fit comfortably into the country genre.

There was no disputing the singer’s raw talent as she moved onto her next song. However, only a couple bars in, the 26-year old was interrupted when she spotted an audience member in trouble and suddenly drew the performance to a halt.

Checking to make sure her fan was okay before starting over with ‘Mistake Like You,’ the track once again featured her guitarist Sondre, shredding up another solo, finishing with a bluesy-jazz run.

Next up was ‘A Driver Saved My Night.’ Introducing the song as a “dance party”, taking advantage of her own declaration, Sigrid treated the stage as if it were her dance-floor. This was followed by ‘Everybody Says They’re Fine’, and ‘High Five’, which ironically had people clapping along in time. 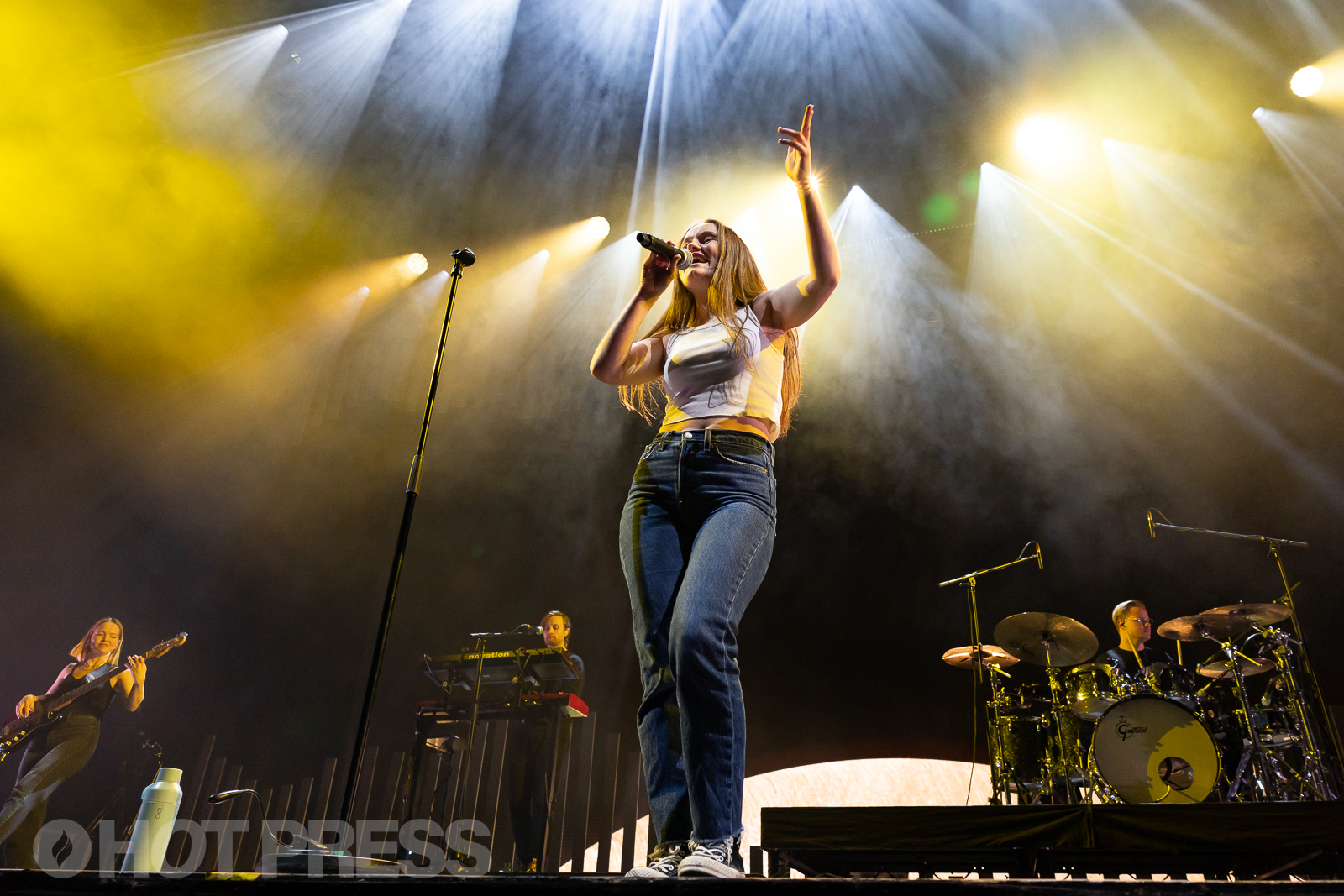 Before the next song began, Sigrid started off by saying “this is an oldie, but a goldie,” before ‘Plot Twist’ played from her 2017 EP Don’t Kill My Vibe and for the second time that night, had the crowd clapping along in unison. Continuing to throw it back, the singer followed that with ‘Don’t Kill My Vibe’ and her smash-hit, ‘Strangers.’

As the singer and her band tried to retreat from stage, calls for an encore overcame closing time, and the musicians reappeared on stage to the delight of the crowd with another ballad, ‘Last To Know’.

She quickly transitioned back up tempo as the gig drew to a close with ‘Don’t Feel Like Crying’ and ‘Mirror.’ In between the two sets, Sigrid and the rest of her band ‘cheers-ed’ the rest of the night as paper cups were produced, with Sigrid announcing, “I'm going to get pissed tonight!”

White confetti snowed down on the crowd as the 26-year-old moved to wrap up her show, proclaiming “When I go, I wanna go out on a high note.” Indeed she did with her final song of the night, 'High Note'.

Sigrid will seemingly always have a home in Ireland, no matter if it's an intimate pub, a Dingle church or Dublin arena.

Listen to Sigrid’s latest album, How To Let Go, below.