Live Report: Wet Leg are the life of the party at The Academy, Dublin
Nora Holland

The two best friends of Wet Leg captivated the venue with ease, despite releasing their first ever track just last year.

The indie-rock/pop duo are greeted on stage with an enormous cheer, sporting matching small gold chains around their necks catch the spotlight, with 'wet' adorned on one and 'leg' on the other. Wet Leg are a band that originated at the summit of a Ferris wheel in 2019, later garnering millions of streams in 2022. Needless to say, Dublin is buzzing to see them.

The critically acclaimed band were supported by Coach Party, who immediately brought a contagious amount of energy to the stage as soon as they started to perform. Similar to Wet Leg, the four-piece band hails from the Isle of Wight where they started their musical career with the single 'Oh Lola' in 2019.

Comprised of Jess on vocals and bass, Steph and Joe on guitar and Guy on drums, the indie rockers have taken the world by storm with the snarky wit of their lyrics and head-banging instrumentals that force listeners to dance. The crowd was no exception; Coach Party brought the party to the pit, getting the audience jumping with their pop-laced yet experimental style of rock.

Performing songs from their most recent EP Nothing Is Real, Coach Party absolutely stunned the audience with their talent, claiming their place as an exciting upcoming band that rock fans should most definitely keep an eye on. The British alternative band will return to Dublin in February 2023 for their own headlining show at The Grand Social. 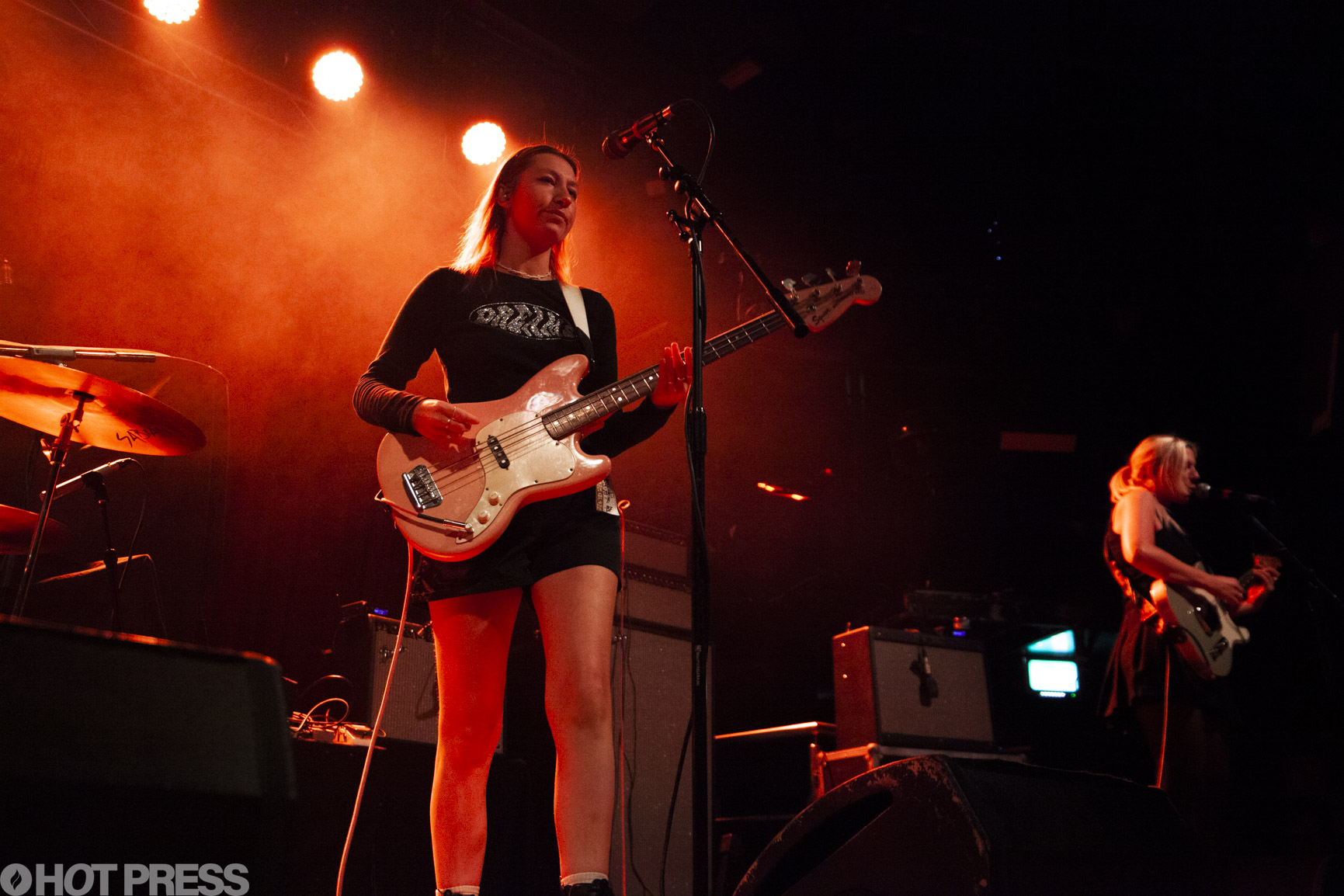 The room hummed with excitement before Wet Leg strolled into the spotlight, immediately launching into one of their most popular songs 'Being In Love'. The opening notes alone sent the crowd into a frenzy, the upbeat drums and guitar along with Rhian Teasdale's bubbly vocals combining into an undeniably addictive tune that evokes smiling, dancing and hair-whipping. They followed with 'Wet Dream', the 2021 single that tops their Spotify charts with over 44 million streams.

Although Wet Leg only started coming out with music a year prior, Isle of Wight natives Rhian Teasdale and Hester Chambers were met with a completely sold out show in Dublin. The venue was filled to the brim, with audience members taking up every single space possible to get close to the stage, squeezing into the tightest spots and standing on balcony seats. 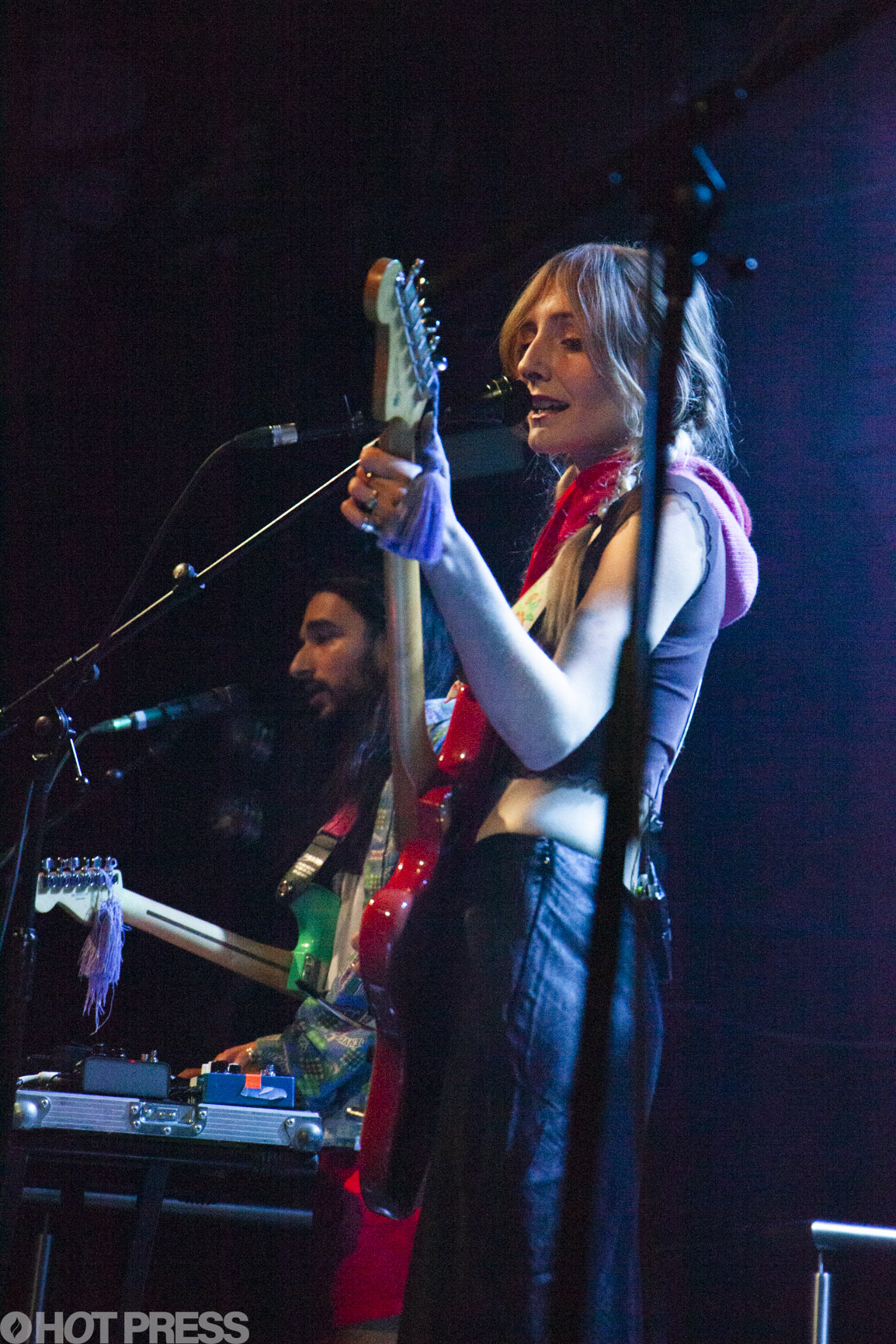 Supported by Henry Holmes on drums, Ellis Durand on bass and Josh Omead Mobaraki on keys and guitar; the band only just introduced themselves to the music world in 2021 with the zesty, playful single 'Chaise Longue'.

However, it only took one song to turn them into alternative rock sensations, quickly wracking up millions of streams and being cited as favoured musicians among the likes of Lorde, Dave Grohl, Iggy Pop and even making it onto Barack Obama's 2022 Summer Playlist with 'Angelica'. The two best friends are now completing their first ever tour following the release of their self-titled debut album, before going forward to support Pulp at Finsbury Park and Harry Styles at Wembley Stadium next summer. Oh, and they just earned a Best New Artist nomination at the 2023 Grammy Awards.

"How's everyone doing?" Chambers asked shyly, eliciting a series of cheers and screams from the crowd. Playing off of the sign at Academy that names it the biggest club in Dublin, Teasdale jokes: "We're at the biggest club and you're the biggest audience, and Wet Leg is the biggest band!" The audience roared in agreement.

Following a couple high energy hits, the band switches gears for 'Loving You'. Teasdale is illuminated by a bright light, casting a halo around her head as she serenades the audience with hauntingly beautiful high notes. 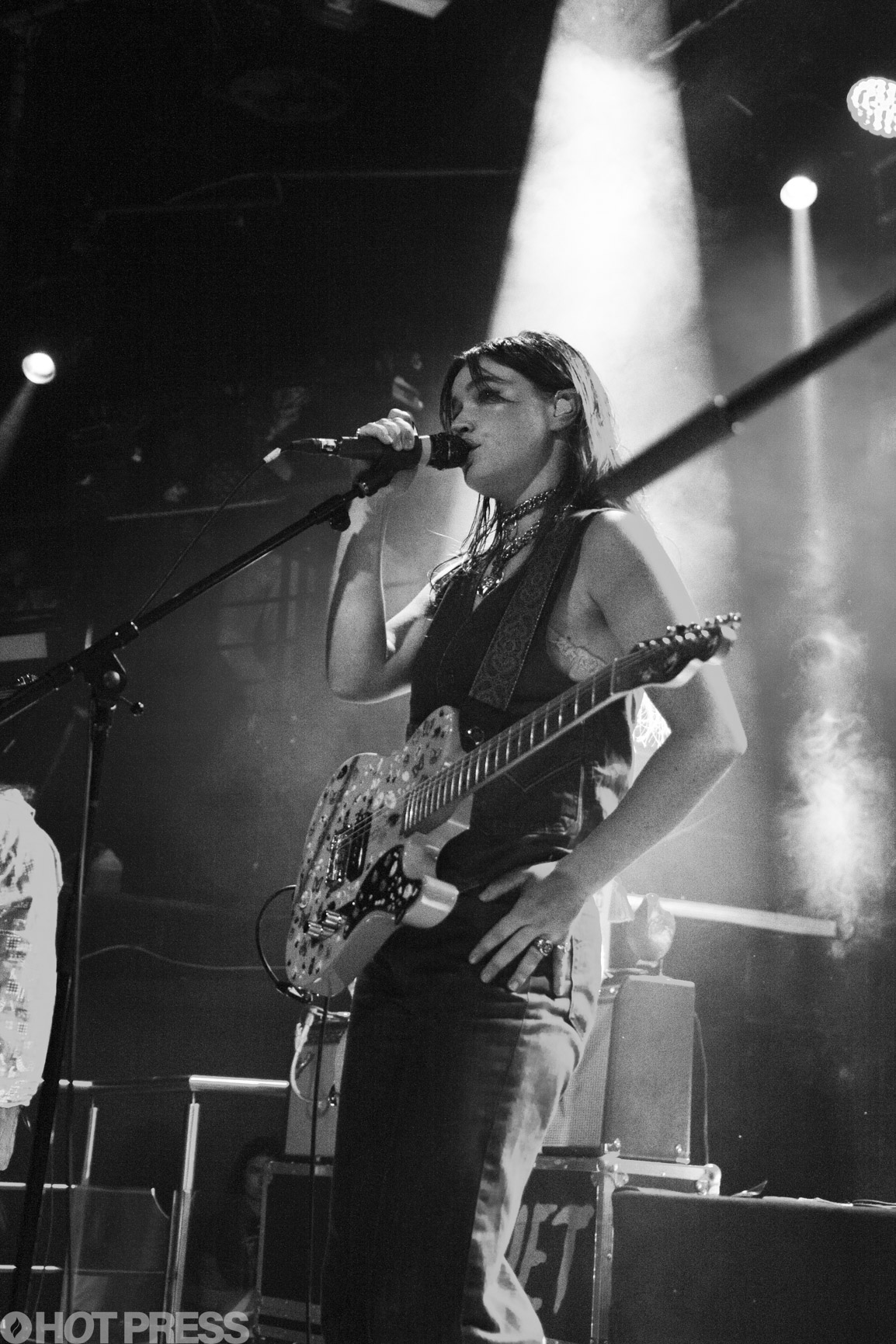 Wet Leg is the newest source of angst for listeners of all ages, projecting an undeniable cheekiness in their lyrics while diving into failed relationships, wasted time and awkward social situations.

Halfway through the set, Wet Leg asks their audience to get loud. "This next one is a screamer, so we're going to want you to scream," Durand chuckled. The band immediately launched into party anthem 'Ur Mum', dancing around on stage while Teasdale belts "Why's this such a fucking mess?/ You're always so full of it/ Yeah, why don't you just suck my dick?" as the crowd sings the lyrics back to her.

During the bridge of the song, the performers tell the audience to scream (like therapy), resulting in the whole venue erupting with noise as fans shriek as loud as they can. 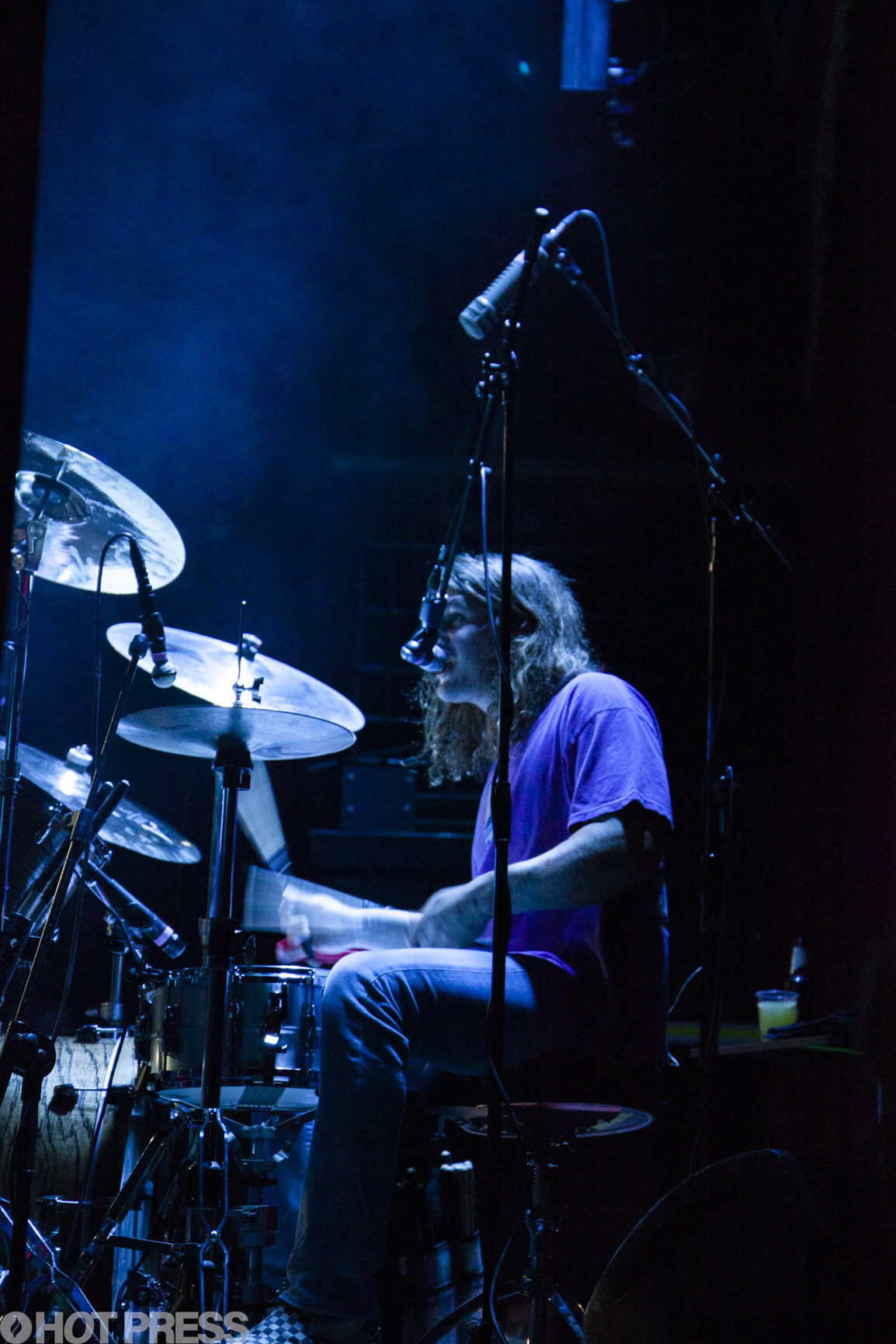 One of the most magical moments that transformed Wet Leg's live performance was simple but sweet choreography during 'Too Late Now'. At the sound of the high chords, Teasdale and Chambers met in the middle of the stage, spinning around around themselves and bending their backs to the sky, adding to the playful, dreamy tone of the track before descending back into rock, seamlessly changing the tempo halfway through the song with heavy drums and guitar strums. I

t was evident to tell that the entire band enjoyed performing as much as the audience enjoyed hearing them, jamming out and dancing with each other with each song. 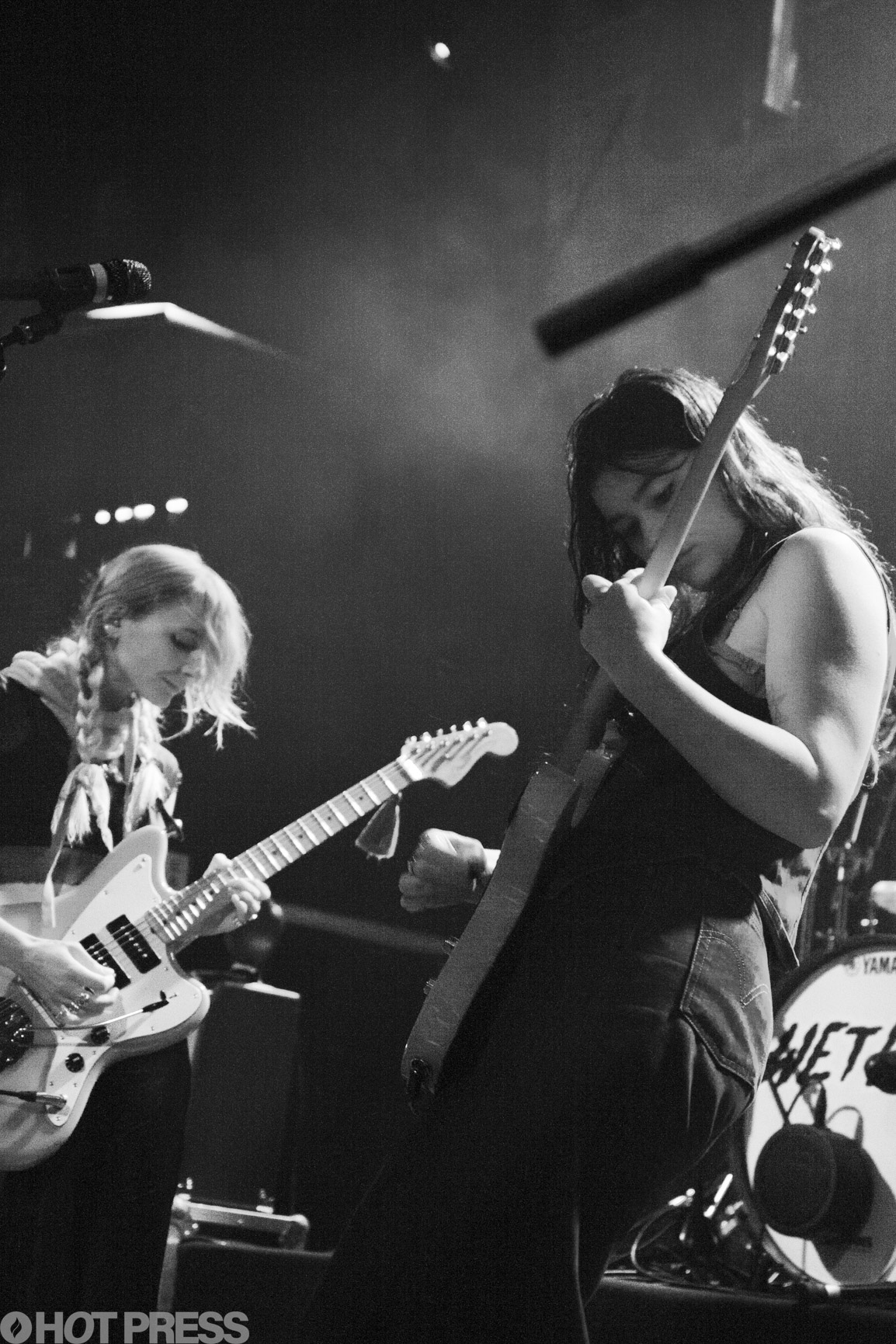 Wet Leg finished out their performance with 'Chaise Longue', the track that started it all. As soon as Holmes started playing the drum pattern of the song, the crowd knew exactly what was coming.

The venue erupted in cheers as everyone started to dance and bop their heads to the undeniably, wonderfully silly lyrics of the band's most famous single: "Is your muffin buttered?' Would you like us to assign someone to butter your muffin?"

Although this gig was part of the band's first big touring experience, Wet Leg were nothing short of extraordinary. It's baffling that the duo just kicked off its music career, because their stage presence, energy and talent shined as clear as day, making it an extremely memorable performance.

There's no doubt that Wet Leg will only continue to climb the ranks with their witty lyricism and angsty anthems. Next time around, they'll be in the 3Olympia, Vicar Street or even - dare we say it - the 3Arena, that's for sure.