I've been attending gigs for as long as I can remember. Pop, indie, classical - I've seen it all. Without being biased, I was always under the impression that there is really nothing quite like an Irish crowd. However, after being one of the lucky ones who got to witness the Hella Mega Tour in the flesh, my suspicions were confirmed. Nevertheless, an Irish audience of die-hard punk rock fans takes it to a completely different planet.

Walking into Marlay Park felt like a fever dream. I almost felt like I had walked into Mr. Schneebly's school of rock with oversized band tees, eyeliner, and Doc Martens in full swing. In fact, it was like I was fifteen again, at the height of my teenage angst. Like many others, this trifecta became the ultimate method of escapism when I found myself unsettled. Talking to other concertgoers, it appeared that many felt the same. From there, the sense of community at the gathering was evident.

The gig was supported by Amyl and the Sniffers, which prepped the crowd beautifully for what was to come. The Australian punk rock band consists of Amy Taylor, Bryce Wilson, Dec Martens, and Fergus Romer. Filled with fire and attitude their self-titled debut record won the Best Rock Album at the ARIA Music Awards of 2019. Thanks to this tour, I have now found myself a new favorite band!

It was around 6:30 pm when Weezer made their way onto the stage. The Los Angeles outfit were glorified in the eyes of their audience. They were in full command and this became a recurring theme for the remainder of the evening. 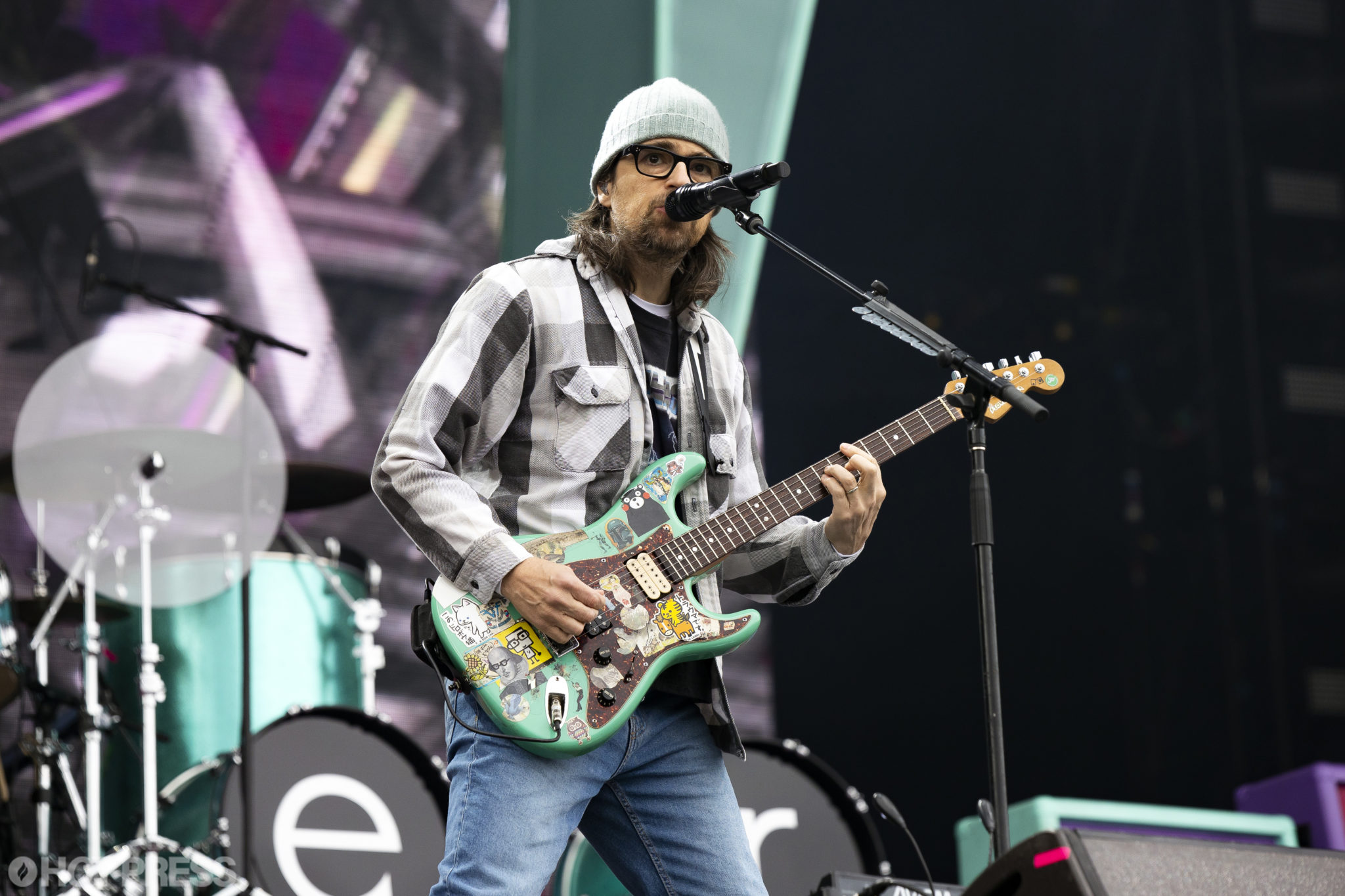 Opening with 'Hash Pipe' made for a thrilling start, as many flocked to the stage in an effort to get the closest they could to the beloved California-based rock band.

Since 2001, the band has consisted of Rivers Cuomo, Patrick Wilson, Brian Bell, and Scott Shriner. After signing to Geffen Records in 1993, Weezer released their self-titled debut album, also known as the "blue album", in May 1994.

After a handful of classic tracks, Rivers Cuomo took to his mic and said "Dia Dhaoibh a chairde. What's the craic? It's Weezer time." You can imagine the reception that sprinkling of Gaeilge received from the crowd.

Waltzing through tracks new and nostalgic, they treated fans to tunes such as 'A Little Bit of Love', 'Records', and 'All My Favourite Songs'. The chill and laid-back 'Island in the Sun' made for a retreat from the guitar-heavy setlist. Handpicked from the softer side of their "green album," the track is currently trending on TikTok.

They also included covers of Metallica's 'Enter Sandman' and Toto's 'Africa' which, naturally, received uproar from the masses.

Fall Out Boy took to the stage shortly after, full of fire and fury. Consisting of lead vocalist and rhythm guitarist Patrick Stump, bassist Pete Wentz, lead guitarist Joe Trohman, and drummer Andy Hurley, the Chicago group's setlist was nothing short of thrilling. 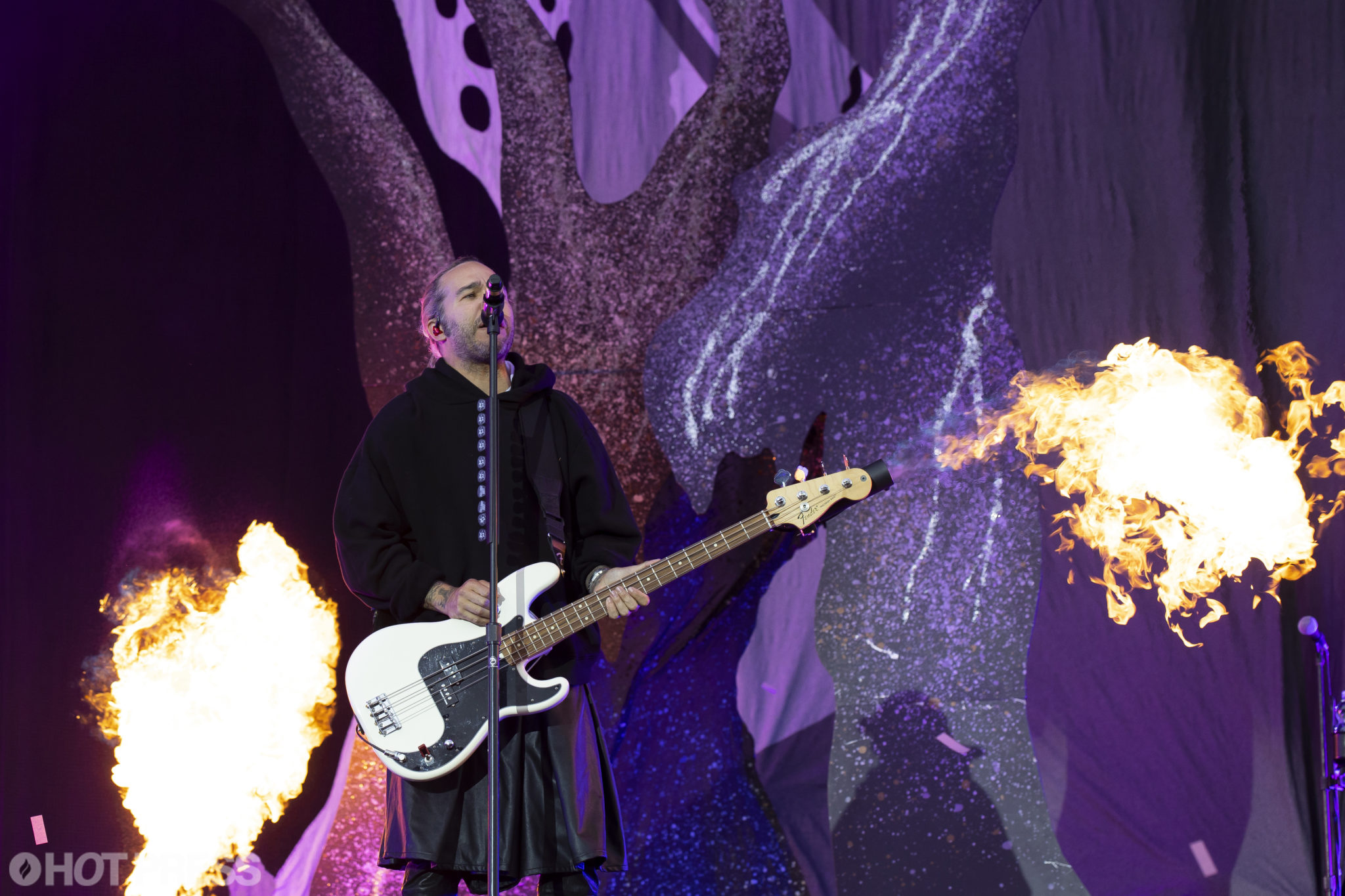 Opening with 'The Phoenix' and working their way through their hair-raising back catalogue, the beloved band made sure to acknowledge the sheer amount of mosh pits that were created around them.

"We've never had seven mosh pits and a crepe stand at a Fall Out Boy concert," as many turned right to look at the minuscule crepe van which had an ever-growing queue coming from its window. Something to warm the hands up as last night felt like winter. It makes sense.

'A Little Less Sixteen Candles, a Little More Touch Me' and 'My Songs Know What You Did in the Dark (Light Em Up)' had the crowd surrendering to their every command.

In typical Fall Out Boy fashion, they closed their set with 'Centuries' and 'Saturday', which allowed the horde to get their last bit of energy out before a brief intermission. The ending tracks were particularly popular with the blow-up T-Rex that found itself in the middle of the rockers.

As many collected pints from the Heineken stands, 'Bohemian Rhapsody' began blaring from the stage. Followed by 'Blitzkrieg Bop', Green Day's iconic pink bunny, somehow possessing the sorcery to hype up any crowd to maximum level, made a welcomed appearance. 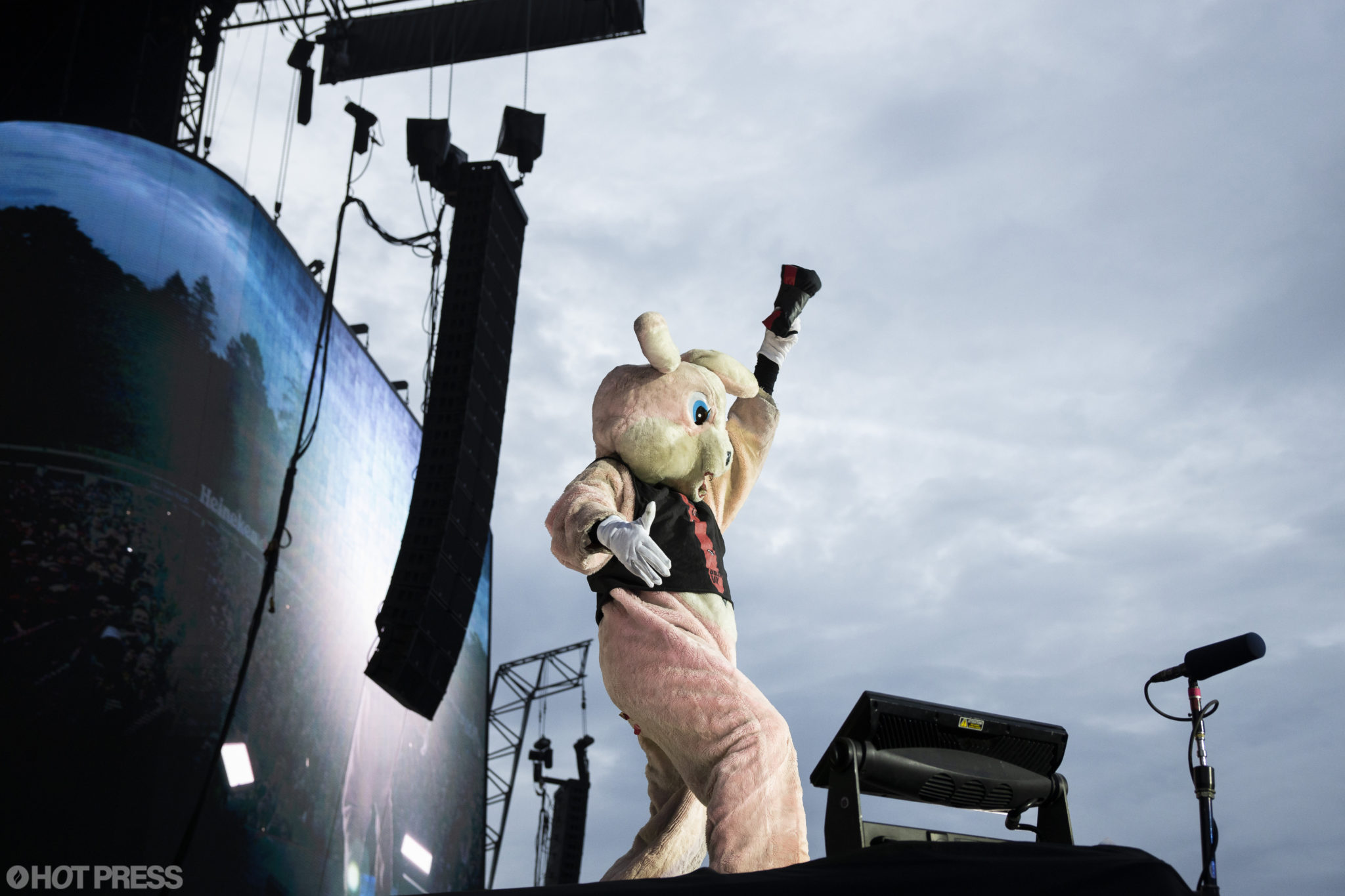 Billie Joe Armstrong, who recently announced he was going to renounce his U.S. citizenship after the Roe V. Wade ruling, and his crew made their way onto the stage and the floor completely lost it, and rightly so. They've waited, what felt like, a lifetime for this.

Opening with 'American Idiot', I wouldn't be surprised if people in Galway could hear just how chaotic this crowd was.

"Look at you and your beautiful fucking country. I envy you. Look at these hills. Everyone give it up for Ireland," Billie Joe Armstrong said, inviting fans to engage in a touch of patriotism on a Monday evening.

Their setlist was nothing short of superb, with 'Boulevard of Broken Dreams', receiving what can only be described as a gospel-like performance from the pitch.

After sliding through liquid punk classics, Billie then said "Did Ireland just get louder than England right now?" Feral screams ensued, naturally. Armstrong must have gotten wind of that whole 800 years of oppression subject, and it worked.

'Welcome to Paradise' and their cover of KISS's 'Rock and Roll All Nite' were also worthy contenders for the loudest audience participatory moments. From inviting fans on stage to their appreciation for the stunning Emerald Isle, Green Day certainly know how to work the floor.

Apart from the 1.5km queue to get into the grounds and the abysmal attempts at getting a taxi home, this gig was unquestionably worth the wait. I think I'll speak for everyone by inviting Weezer, Fall Out Boy, and Green Day back to Dublin as soon as possible. 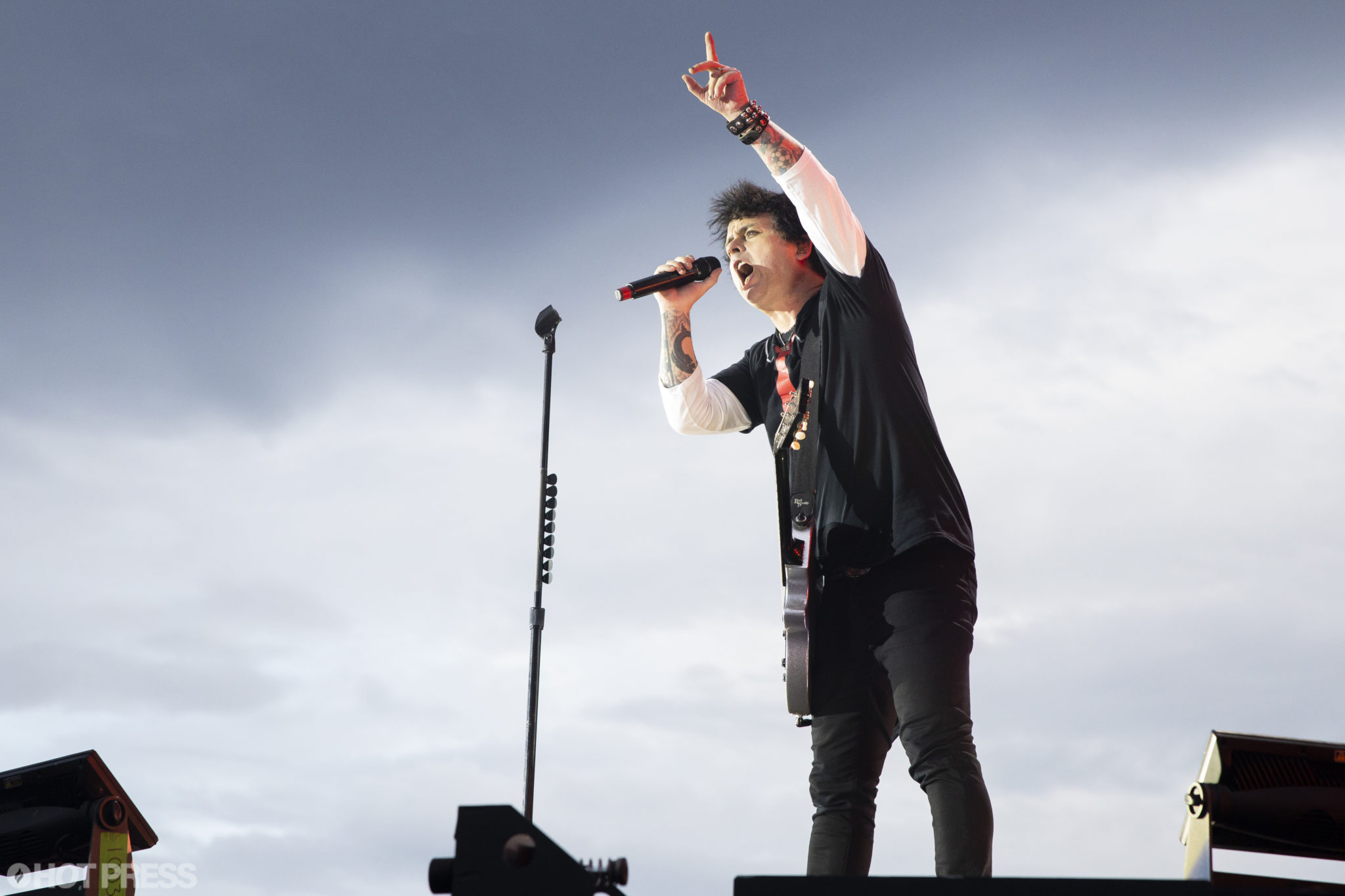