The LA indie-rock band delivered a fresh and exciting performance for Irish fans.

Effortlessly cool Californian band Warpaint were greeted with a warm, balmy evening for their first headline concert in Ireland in five years. Fans, drenched in golden sunlight, lined up outside The National Stadium in Dublin – a uniquely eclectic venue, which holds the title of the only purpose built boxing stadium in the world – prepared for what was destined to be a knockout of a performance. 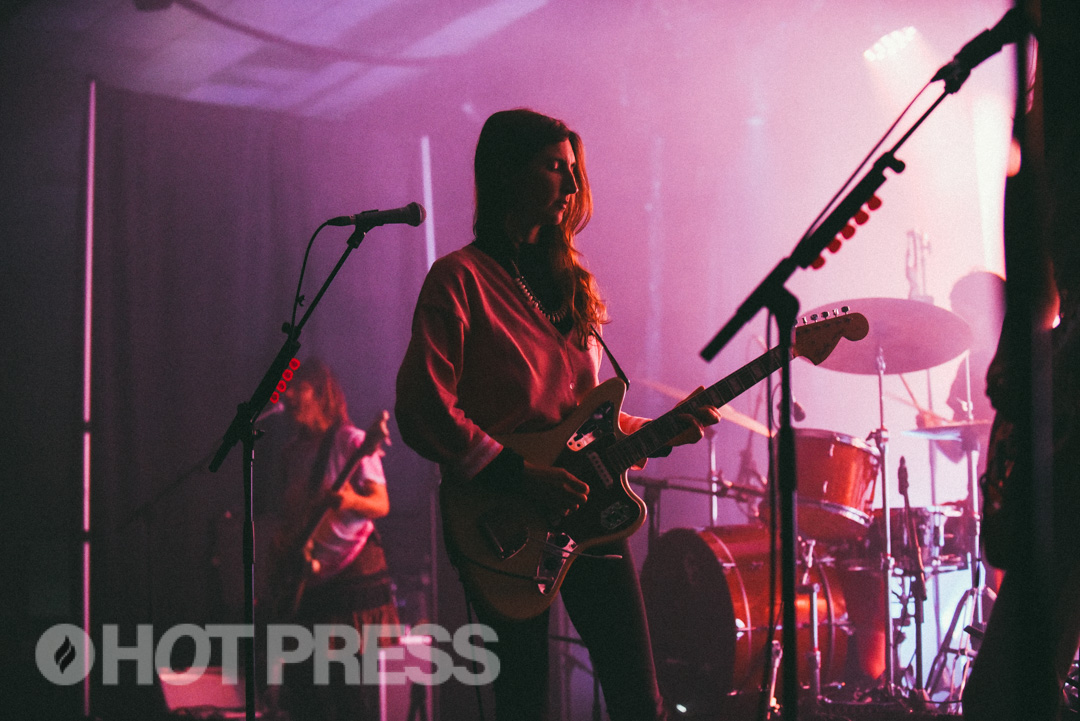 Warpaint at The National Stadium, Dublin. Saturday 14th of May 2022. Copyright Miguel Ruiz.

Warpaint were met with a roar of support as they strolled onto stage, Wayman with a cup of tea in hand. Plunged into darkness, the first hypnotic lines of ‘Stars’, a release from their 2010 album The Fool, began swirling throughout the venue. Wayman and Emily Kokal stood stoically side by side as they belted out the song’s lyrics in perfect harmony, now illuminated by red stage lights, while the crowd cheered them on as the tempo of the song began to pick up.

Warpaint, an LA-based collective formed in 2004 by Wayman and Kokal, alongside sisters Jenny Lindberg and Shannyn Sossamon, released their debut album The Fool in 2010. Going forward, they released their self-titled follow-up in 2014 and shortly thereafter Heads up in 2016, before a lengthy six year gap in creating music. Earlier this month they released their fourth studio album, Radiate Like This, which was created remotely during lockdown.

Drummer Stella Mozgawa took centre stage during the second song of the night ‘Champion’, a track off their new album, centred around an airy indie-pop melody. Throughout their performance, lead vocalists Wayman and Kokal sang mostly with their eyes closed and brought a level of quiet emotion to each song, appearing as though they were connecting deeply with each track and remaining unaffected by the huge swathe of absorbed fans.

As the first notes of fan favourite ‘Love Is to Die’, trickled out into the stadium, the crowd perked up significantly, and those still sitting rose from their seats out of excitement. Jenny Lindberg was a force to be reckoned with on bass and her accompaniment brought an extra layer of life to each song and further enlivened the entire audience until everyone was on their feet dancing along with the band.

In a sudden departure from the intense burst of energy which had made its way through the crowd, the entire venue hushed as the band came together in the centre of the stage for a quiet and thoughtful rendition of ‘Melting’, also off their new album Radiate Like This. Besides a few rogue hecklers, the entire crowd became silent, enraptured by this serene performance and the band’s buttery harmonies. As the song came to an end, a deafening cry of appreciation from the audience broke the silence. Wayman found a break in this chaos to ask if anyone could send the band suggestions for good Irish folk music on Instagram, to which one fan shouted in response, 'Danny Boy' – much to the bewilderment of the rest of the crowd.

After once again electrifying the audience, the band played a few more songs including ‘Stevie’, a soft indie-rock tune and continued on to finish the set with hypnotic dance-rock track ‘Disco//Very’, before exiting the stage to a flurry of applause.

After a few minutes of heightened anticipation, the crowd erupted into celebration as Warpaint returned on stage for their encore, during which Lindberg delivered a surprising cover of Fugazi’s ‘I’m So Tired'. The band went on to perform soft-rock track ‘Beetles,’ before taking a well-deserved bow and tapping out.

Check out the latest issue of Hot Press to read our interview with Warpaint.