"We want 'Dublin'! We want 'Dublin'!" chants broke out multiple times throughout Selló's gig at The Academy Green Room. But with high-energy tunes, brilliant audience interaction, raw storytelling, and hard-hitting drill beats, we got much more than that.

Selló's debut mixtape Sellótape shot right up the Official Irish Album Chart upon its release in October. In a monumental achievement for the Irish drill scene, the Clondalkin rapper made Irish chart history as the first drill artist to break into the Top 10.

At his first ever, sold-out headline show at The Academy Green Room in Dublin on Friday, the 22-year-old proved that he isn't only a gifted recording artist. He's an outstanding performer at that.

"My name is Selló. Who’s been to Molly Malone?," the rapper asked his expectant fans as he jumped on stage, welcomed by a roaring crowd. One thing was clear from the very first note: this show would be a loud, energy-filled explosion of the senses. 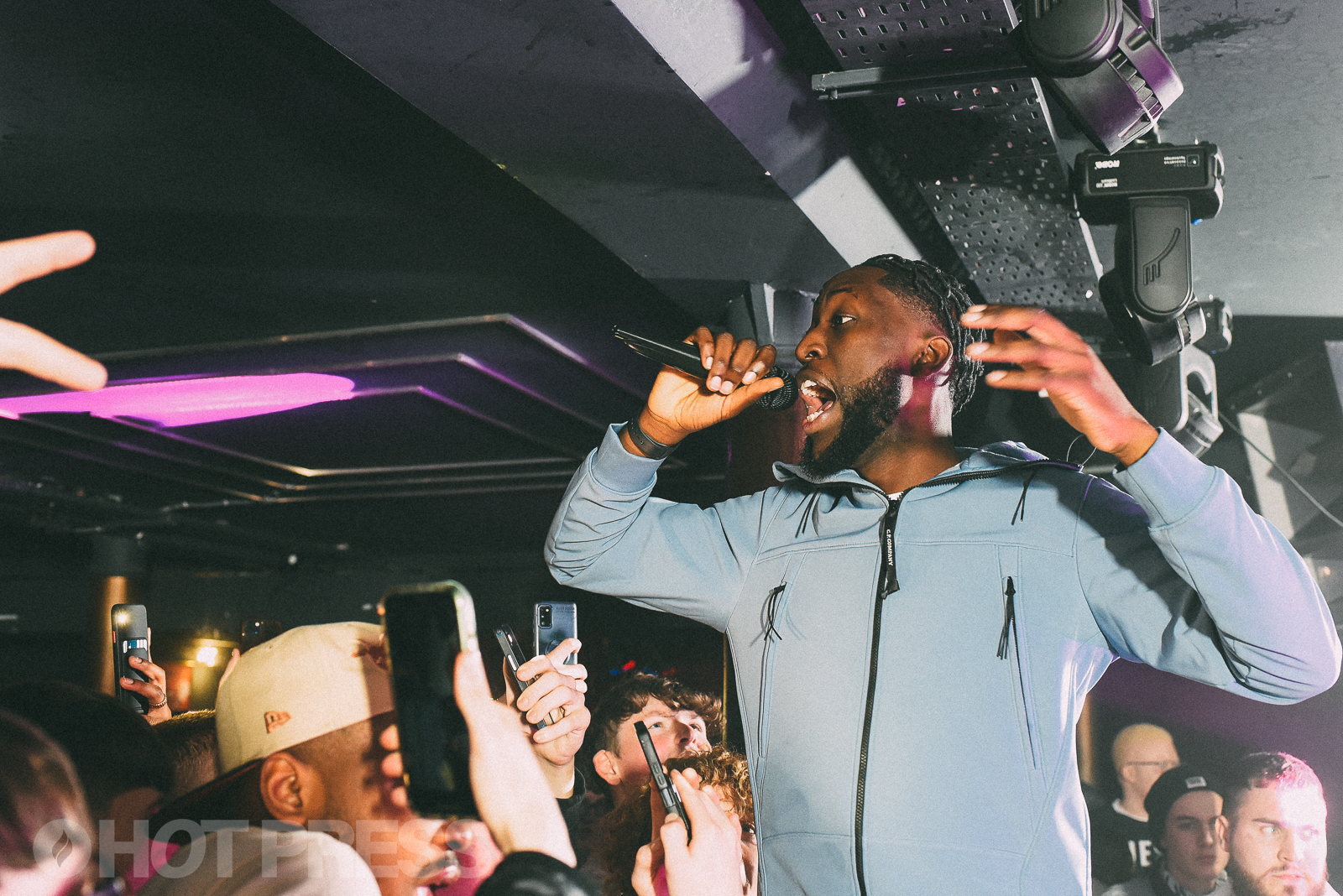 From 'Molly Malone' all the way to the much requested 'Dublin' at the end of the 16-song-strong set, Selló and his D22 crew gave it one hundred percent, and more. They encouraged dance-offs in the audience. They leaped from the stage onto the railings to be especially close to the crowd. They even welcomed a fan who jumped the barrier with open arms, quite literally, and gave him a mic to sing along.

The community feeling shone through, which was unsurprising since Selló celebrates Black Irish culture with such raw authenticity on his debut. On stage, in his interaction with the audience and in his songs, Selló's pride for his cultural heritage is readily apparent.

While many of his songs are filled with references to his hometown, including bars about Molly Malone, Brennans Bread, the 13 bus, and RTÉ, the one track everyone was dying to hear on Friday was 'Dublin'. The ode to Selló's hometown, "the C side" aka Clondalkin in South Dublin, has racked up over 700 thousand Spotify streams. 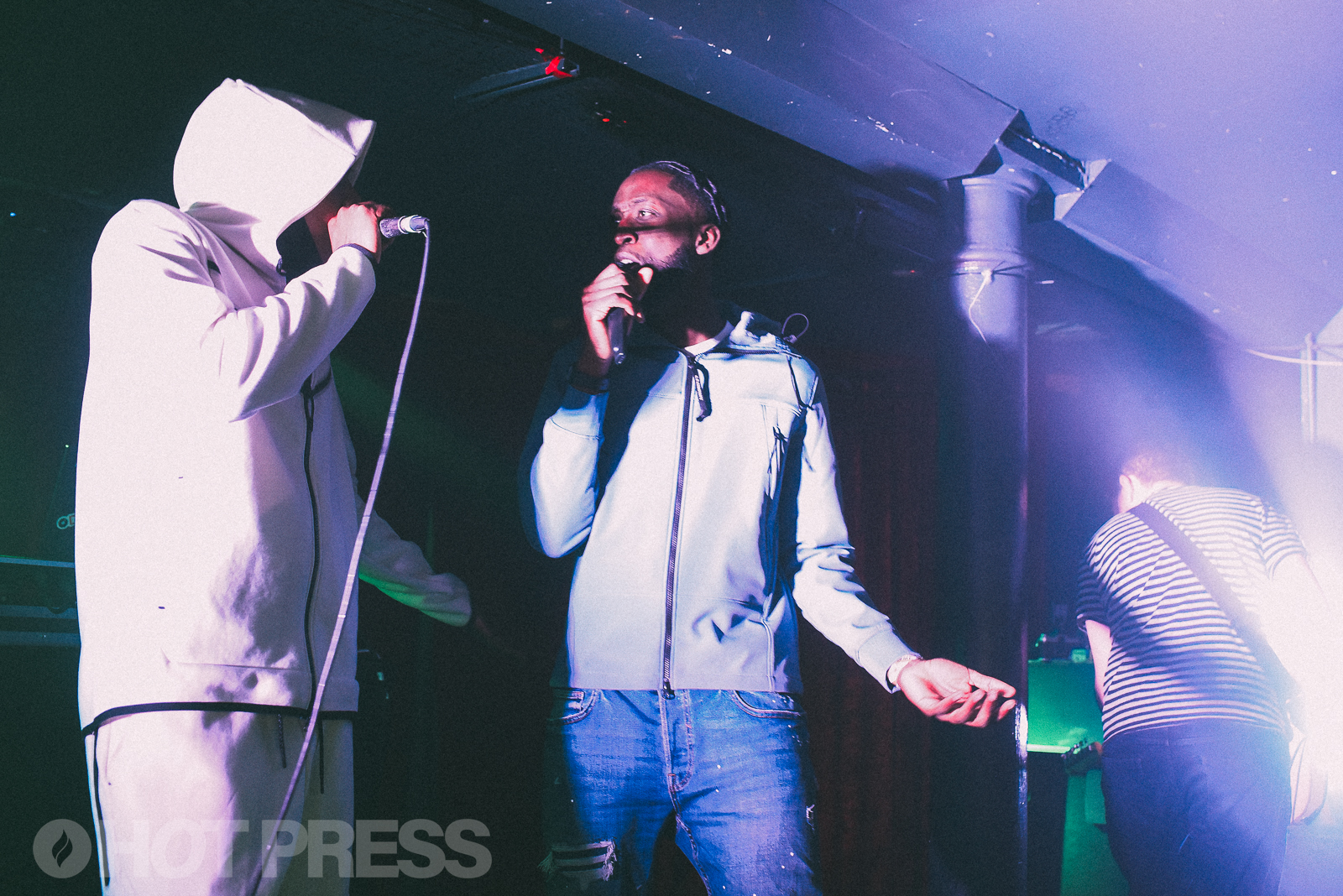 The rapper followed 'Molly Malone' and its sea of flashlights with the hit single 'No Love'. "There’s no love in this game but you’re giving me love right now," he announced, adding "You’re fucking mad, yo."

Truly, there were a lot of "yos" and "bros" flying about the room all night.

"I made it this far with no watch or a chain but she still wanna kiss cause I'm Irish," Selló raps extra close to the crowd, surrounded by stretched out arms. "I got a seaomra full of cailini/ Now my old links are calling me"

His skillful, thick Dublin accent rapid-fire rhymes, and incorporation of Irish phrases stand out. He has a room full of girls, Selló says, but makes a point in telling the audience, "Little bit of advice. Chase money and don’t chase girls."

He moves on to 'Testimony', during which he takes selfies with fans in the front row, and 'Diana (feat. Evans Junior)', with the stage now flooded in red and pink lights.

Slang and colloquial language are a given, and fill Selló's tracks with honest and relatable storytelling.

'Yo B' sees the rapper scream "energy, energy, energy", bouncing up and down. He is hyping up the crowd (it's not like they need any encouragement), and the energy is so celebratory that we almost miss the serious statement about racism that the song contains. "Yo Babe! What's your name?... She don't fuck black boys/ Why she racist/ I switched off the light she couln't tell what me race is," Selló raps.

As the song draws to a close, he demands, "Everybody say, 'Go Selló, go Selló'," and the crowd join in with unabashed passion. "That’s a motherfucking vibe, yo." 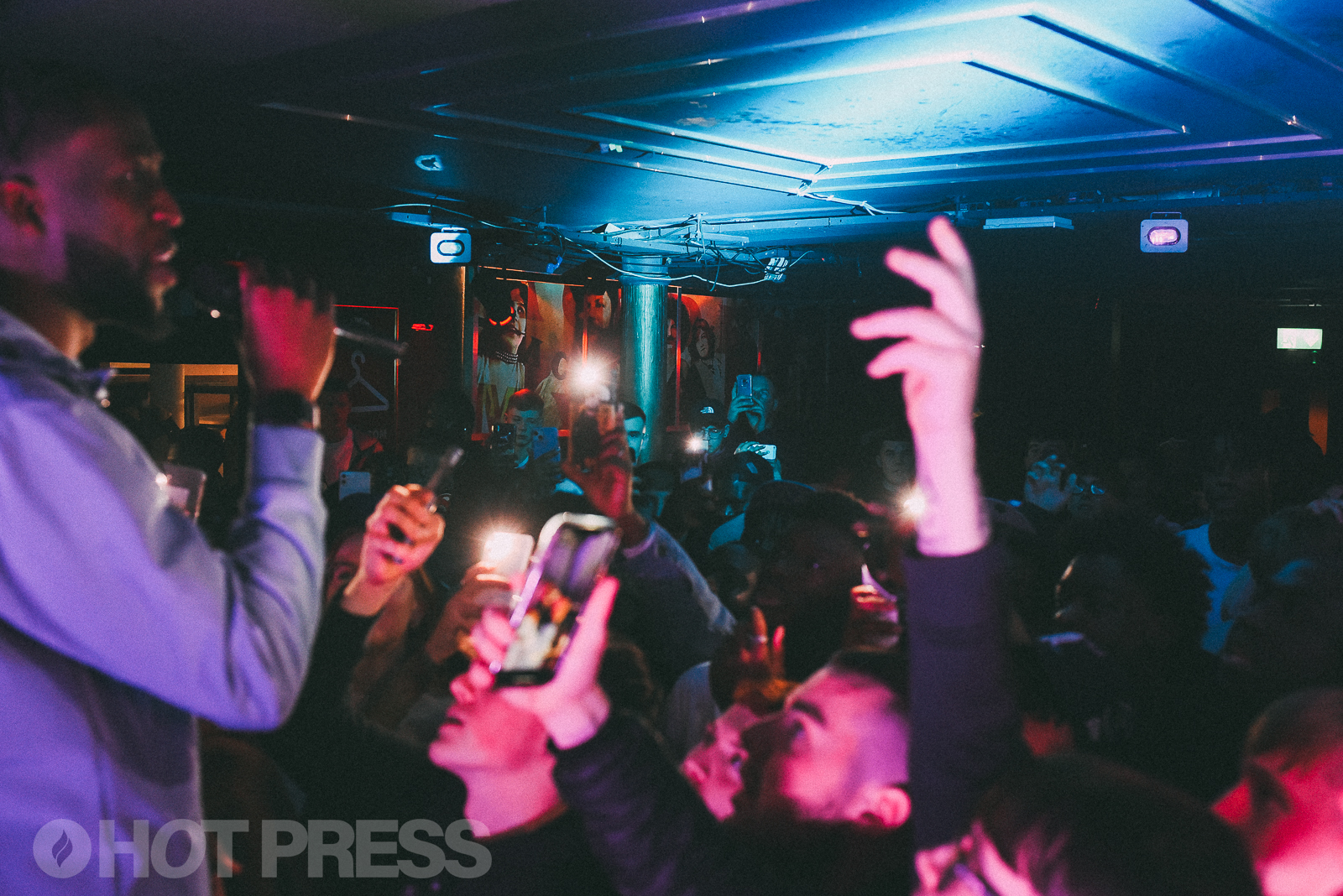 Selló served us 'Mia Khalifa', 'Big Mac (feat. A92)', 'Take Me To Church' (an official cover of Hozier's 2013 hit) and 'Sláinte'. But amidst the high-energy tunes, one that stood out was 'Process', in which the rapper confronts the hardships of everyday life that left him in limbo. On one hand he's striving to make it in music, on the other he's lacking economic support.

"Ma said prayer is key/ But other than her/ Who's praying for me," he wonders, adding, "Nothing but sleepless nights/ I'm watching them/ While they sleep on me."

"Them" in this context refers to record labels, and we can feel how proud Selló is of his own achievements. Things are certainly looking up as the rapper signed a major deal earlier this year with Warner Music Ireland, and the UK’s Atlantic Records, as part of their joint venture with Irish label Trust It Entertainment.

"I'm my only rival/ Real name Michael/ It's either live a legend or maybe die an idol," his ambition also takes centre stage in 'Story Mode', only to make room for heartfelt words addressed to his suicidal friend in the next verse. 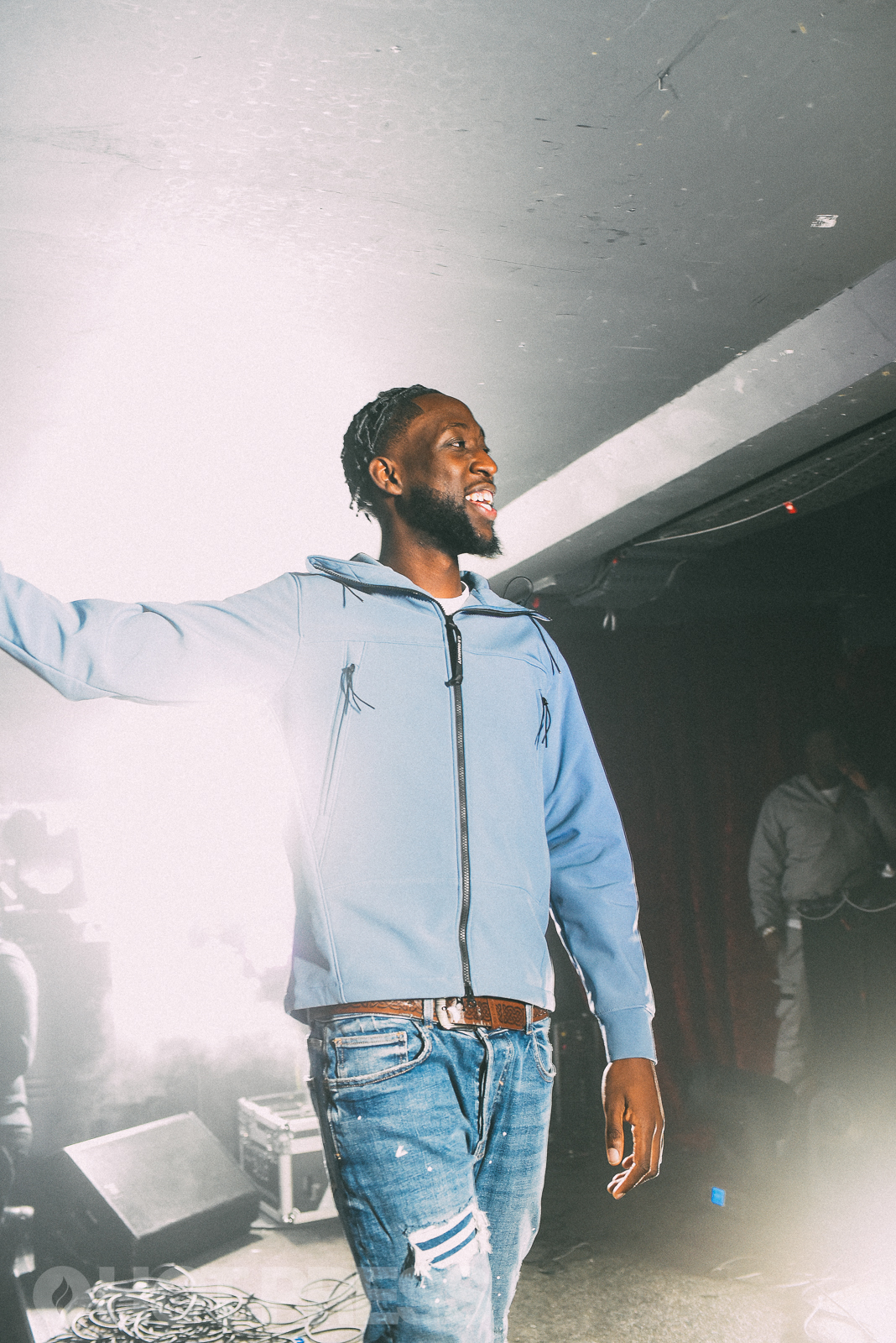 Friday night drew to a close with an encore so extensive, it could as well have been its own set. Then again, the crowd wanted to hear all of Sellótape and Selló wasn't going to leave us hanging.

'As Gaeilge', 'Come Ouu (feat. Jrilla)', 'Irish Girls' (feat. Reggie), and 'Oggy' (another standout moment) culminated in a mind-blowing performance of the hit song 'Dublin'. What better place to perform it than right here!

Thankfully, he remembered the words.

"Yo B, I'm from Dublin, but you don't know shit about me/ I never been jail, never been OT," Selló dove into his biggest hit, which samples and transforms The Chieftains' legendary 'The Foggy Dew' into an otherworldly loop.

All along, Selló stayed so close to his fans, he almost became part of the crowd. On the other side, his crew rapped along on stage - now joined by the guy who jumped the barrier earlier on.

The moment was a beautiful representation of what's at the heart of Selló's music, as well as his Academy gig: community, Black Irish culture and hella good beats.

"Seasaigí, that's my clann, my family"

Selló definitely stood up to the mark!

Find all the photos from the gig here.