The British-Japanese pop superstar brought her incredible 'Hold The Girl' tour to Ireland for two massive, sold out nights in a row.

It's pretty obvious when Rina Sawayama's in town. Namely, the cowboy hats and glitter come out, alongside a massively diverse, queer-friendly audience itching to dance all night long to their Queen Mother. As they should - the last time the London-based star visited Ireland, she delivered a high-energy set for Mother's Pride Block Party, despite Aer Lingus losing her bags.

Let's not discount the British-Japanese musician's electrifying set at Electric Picnic in September, where she performed tracks from her ground-breaking, critically acclaimed debut album SAWAYAMA and RINA EP. This time around, a year after her Academy Dublin show for a significantly smaller, but still utterly devoted audience, Rina hits Dame Street's 3Olympia Theatre not once, but twice. The results were spine-tingling.

The Dirty Hit signee truly has the whole package: mingling grunge, pop, punk, country and rock for colossal anthems, kickass dance numbers and confident charisma for days. Consistently joking that "slay" is her whole brand, one live show with Sawayama shows how limitless her talent is. 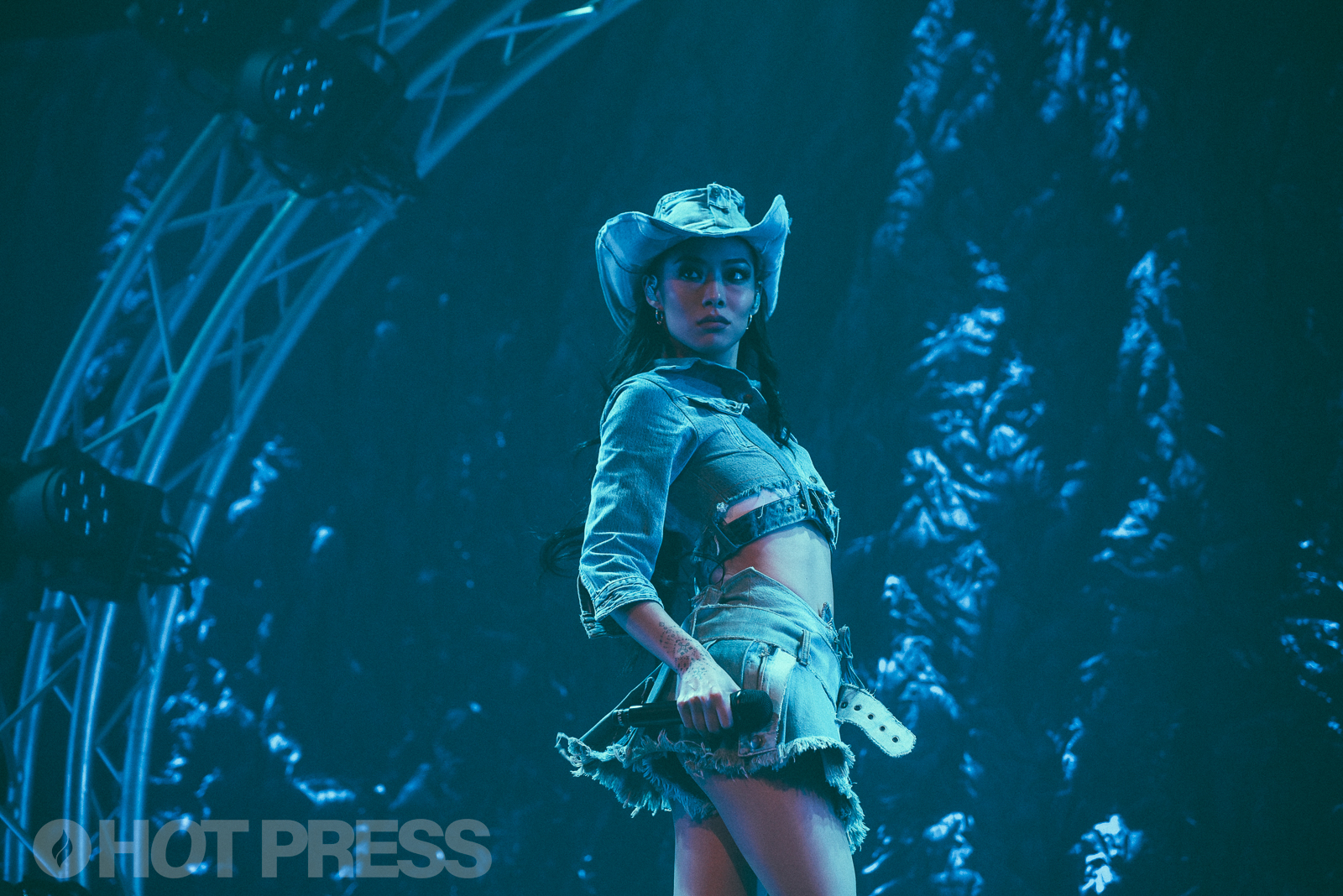 With Tom Rasmussen as her special guest, the non-binary drag sensation delivered falsetto glory for 30 minutes, warming up the colourful crowd for Rina. Rasmussen, aside from being a journalist and editor for high-profile publications like i-D, Refinery29, Dazed and The Independent, also recently published their own memoir, Diary of a Drag Queen. Taking to the stage, they performed dance-pop tracks like 'Dysphoria', 'This Is How We Walk On The Moon', 'Fabulous Opera' and more. The audience was full of warmth for the multi-faceted artist, who plays with gender roles and sexuality using euphoric, soaring dance choruses and plenty of high art drama.

At 9pm, chants of 'Rina, Rina, Rina' were blasting around the venue, the fans brimming with anticipation. Cowboy hats at the ready, deafening screams could be heard from the moment the opening chords of 'Minor Feelings' kickstarted. Entering the stage in a denim cowboy getup that 2010 Lady Gaga and 2002 Shania Twain would be proud of, Sawayama's boundary-pushing use of fashion is a primary factor within her fandom's admiration. Armed with two energetic backing dancers, a circle of lights enshrouded the 32-year-old, highlighting her denim cape and fierce poses. 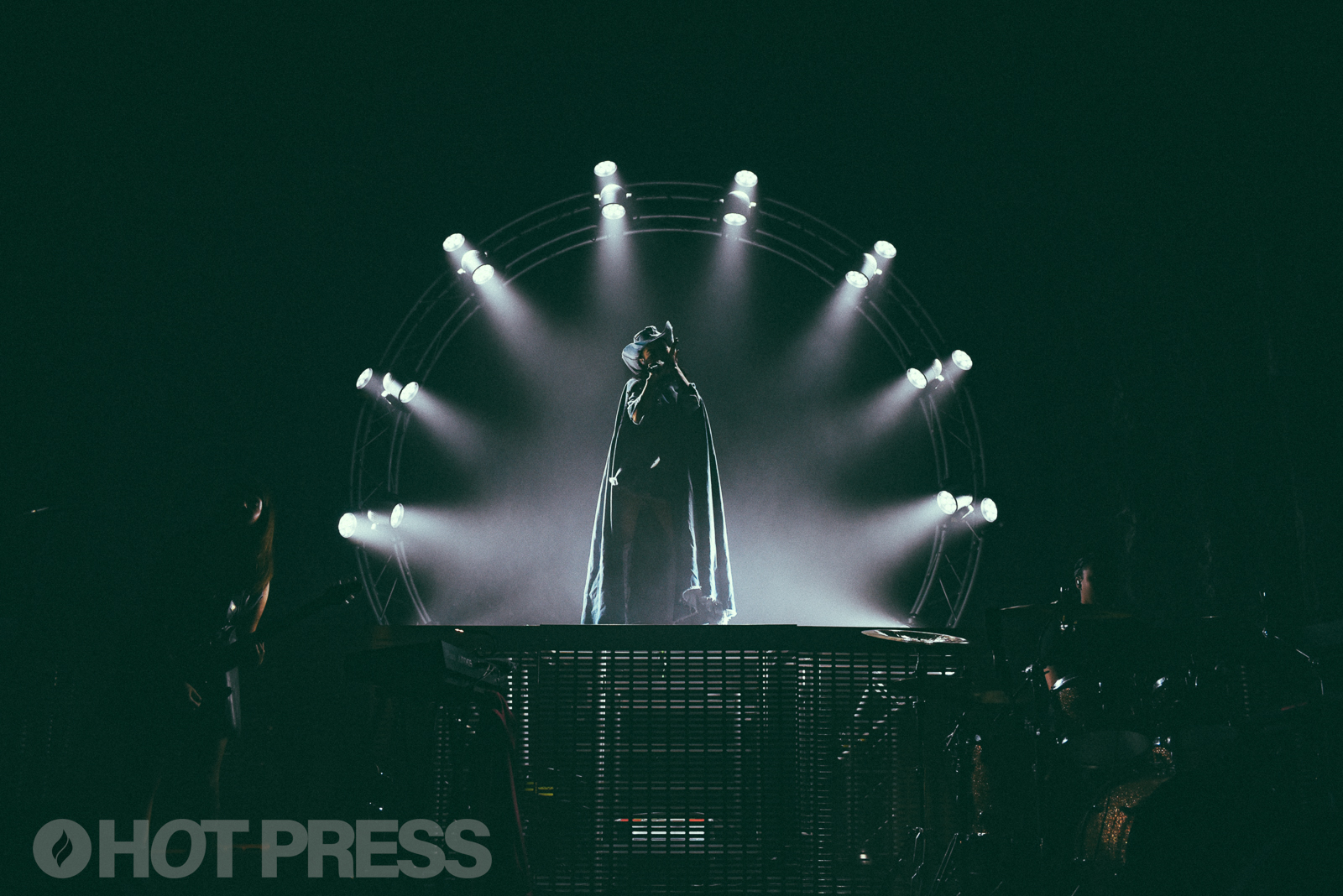 "How am I supposed to feel when you're telling me that nothing in my life is real? When you throw your words and hide behind a plastic shield/I just sit and smile," she sings, her distinctive crystal clear vocals filling up the 3Olympia Theatre with ease and grace. The opening track on her sophomore album Hold The Girl sees Rina emphasise her usual vulnerability, dreaming from her childhood of fitting in and crafting her own fairytale when she moved to the UK with her mother from Japan.

Forging an intimate, powerful atmosphere with epic vocals and cinematic stage presence, up next is the unbeatable album title track 'Hold The Girl'. Fusing almost drum 'n' bass beats with pop melodies, Madonna's 'Like A Prayer, disco, country vibes and string sections, it's yet another unique anthem from a one-of-a-kind artist. Pirouetting through pop-punk and power ballads, trance and stadium rock, the crowd are mesmerised for the full hour and 30 minutes.

Following the same tracklist as the album herself, 'Catch Me in the Air' envisions The Corrs' pitched to Gwen Stefani. She opens the heartfelt tribute to her single mother with new age woodwinds that nod to Céline Dion before switching to Kelly Clarkson guitar strums. 'Hurricanes' sees further fun choreography as Rina makes the stage her personal dance floor, making use of every inch of it during the pop-focused track.

"So won't you give me a sign if you're really there?/'Cause I've been lost inside waiting on a prayer/Until I find your door, until the wind blows north/I'm running, I'm running, running into hurricanes," she belts as a wind machine adds to the fast-paced, power-pop mood. Of course, there's not a bad note. 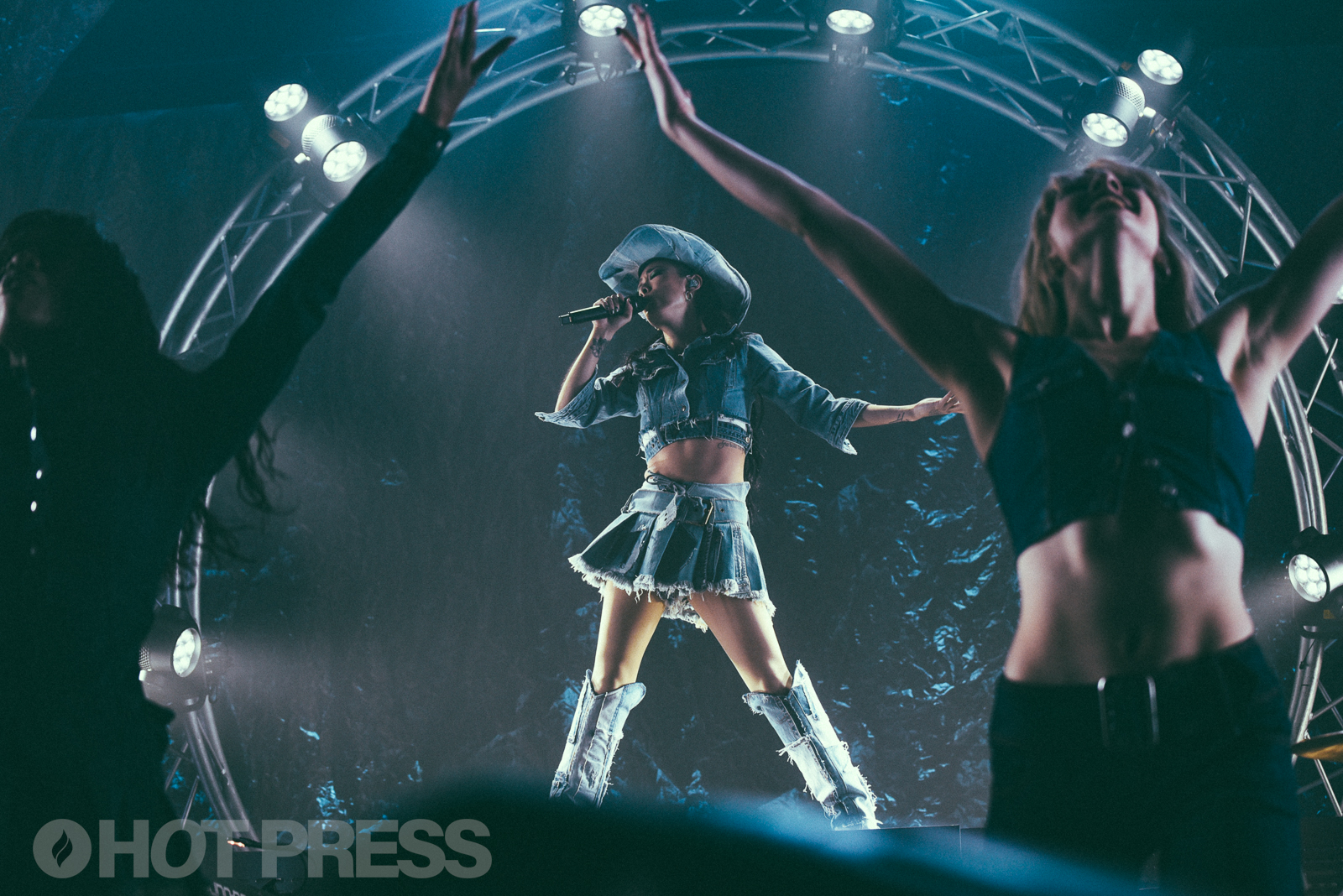 When the time comes to perform 'Your Age', the ambience goes full grunge-rock. There's an outfit change to maroon tracksuits as her dancers put their hoods up. Beginning with a banjo riff, the seventh album track was inspired by Nine Inch Nails. It's a testament to the #MeToo era, describing an imbalanced, toxic relationship of power and societal expectations.

"Now that I'm your age, I just can't imagine/Why did you do it?/What the hell were you thinking?/'Cause I'm not a secret, and I'm not a problem," she sings, her vocals warped over electric guitar riffs.

'Imagining' and fan favourite rage anthem 'STFU!' whip the audience into a frenzy, as fast-paced electronic beats lead to textured, riotous choruses. Dramatic rock riffs and raw aggression bring the gig-goers to life as they pour their own experiences into her performances. The guitar solo in 'STFU!' in particular could blow the roof off any stadium, before 'Frankenstein' injects more fun fuel into the fire. 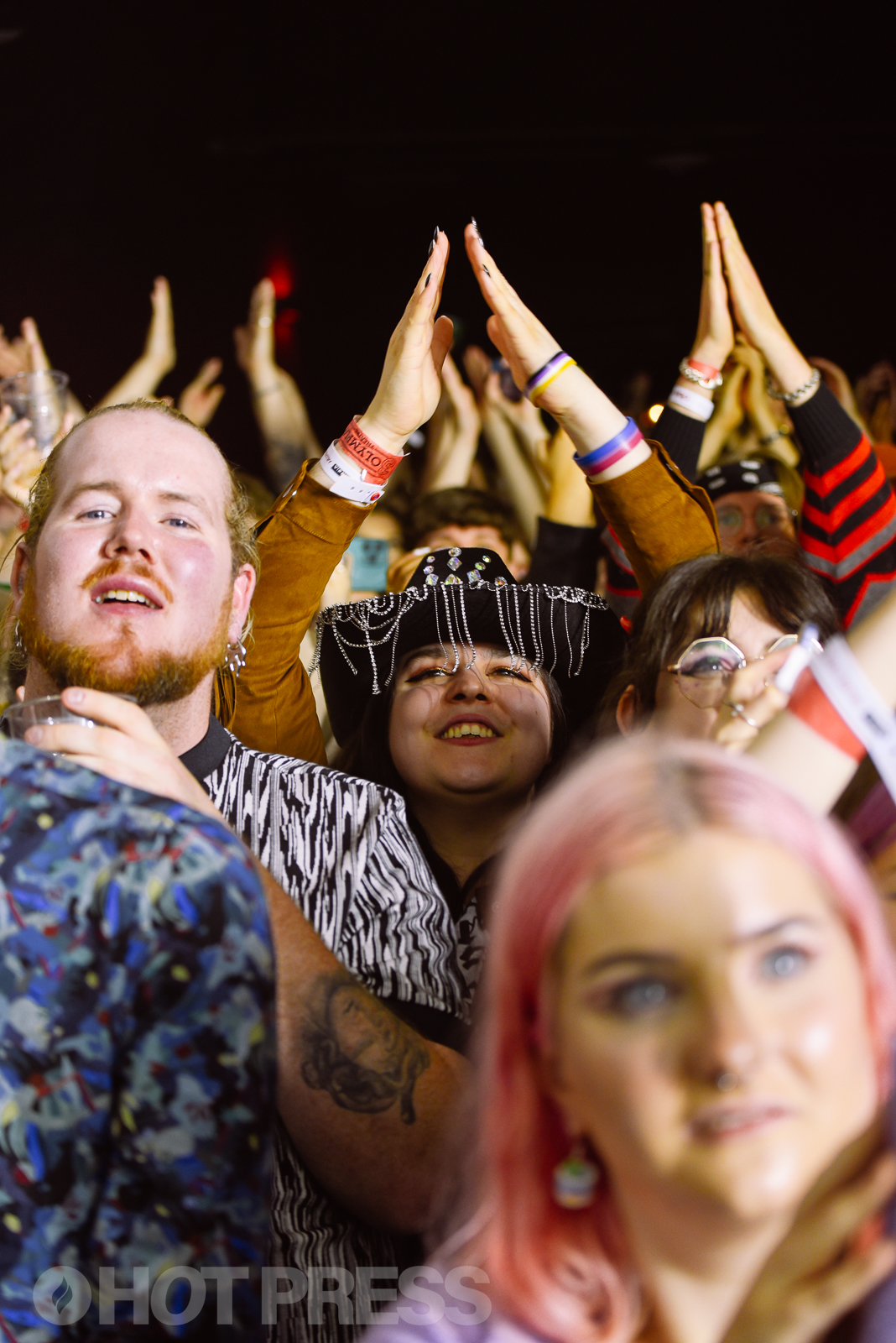 'Holy (Til You Let Me Go)' is a blinding club stomper that takes notes from Eurodance tracks of the '90s, while SAWAYAMA track 'Bad Friend' sounds beautifully influenced by Gaga's Chromatica mixed with Born This Way.

"We ran through the bright Tokyo lights, nothing to lose/Summer of 2012, burnt in my mind/High, crazy and drunk, five in a room/Singing our hearts out to Carly, sweat in our eyes," the track opens. Her vocals at the climax of the tune are out of this world, leading to deserved applause and cheers. She makes it look effortless, too.

'Send My Love to John' is an intimate ballad wherein Sawayama’s voice is accompanied solely by acoustic guitar and some layered vocals. It’s one of the few songs on Hold the Girl in which Sawayama seems to tell a story beyond her immediate personal experience. It written in honour of a queer friend that weighs up the reluctance of immigrant parents to comprehend their children’s sexualities. It ends well: “Send my love to John,” offers the mum, belatedly acknowledging a same-sex partner. The entire audience holds up torches from their phones, lighting up the space.

Another ballad, 'Phantom', sees Taylor Swift's marks on it, describing “stickers and scented gel pens” as a little girl wanting to be loved: "Once upon a time/There was a girl, pleasing the world/Dying to be liked, looking for love/Wanting to trust."

The huge vocal runs on the song are destined to be heard live, specifically with Sawayama's muscular pipes not holding anything back. It's thrilling to watch, before nostalgic Hold The Girl closer 'To Be Alive' leads to a few numbers from her debut album. 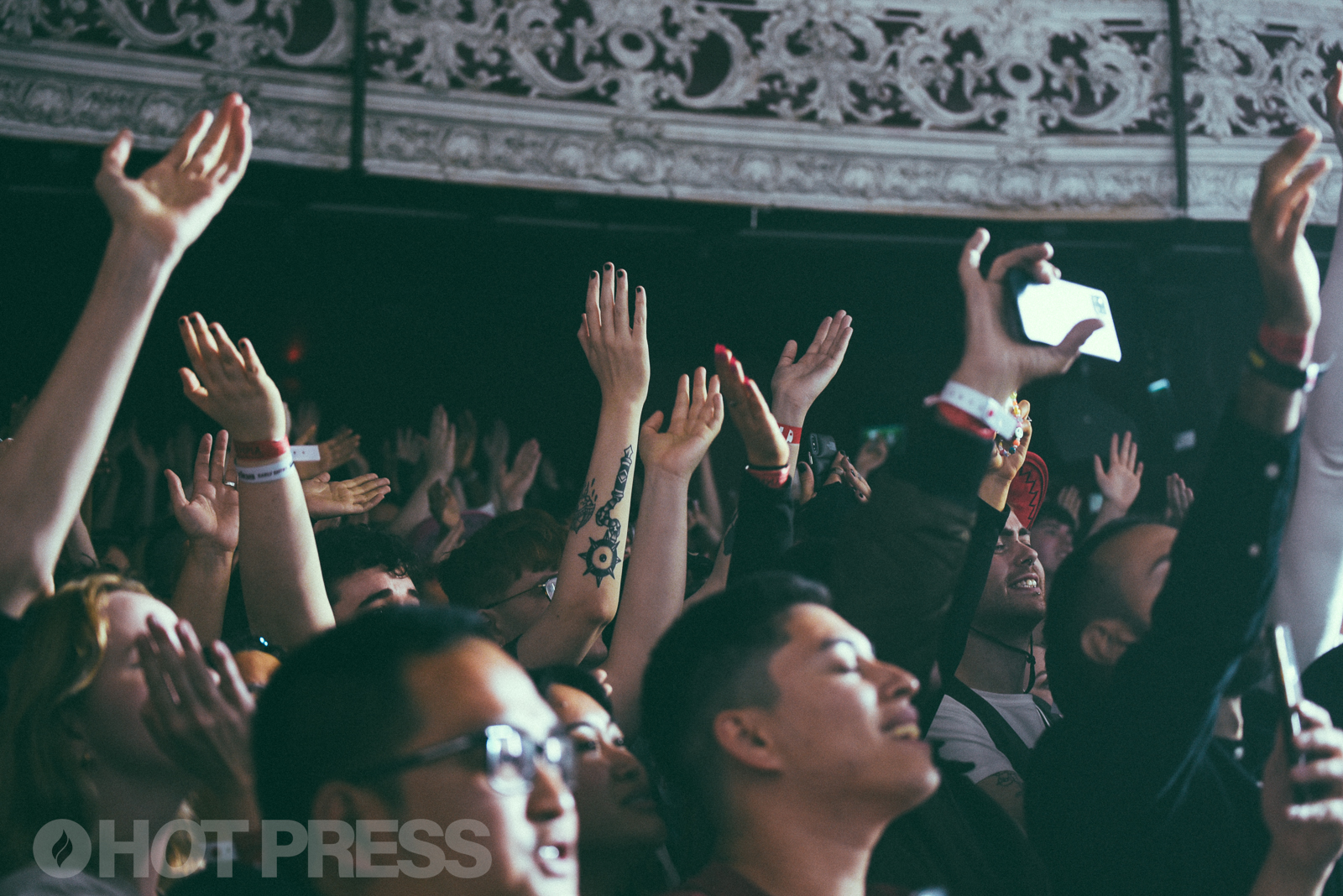 'LUCID' (garage remix) and Charli XCX collaboration 'Beg for You' reignite the dance portion of the evening, with booming electronic embellishments and queer club beats. The audience know every word, screaming back to their pansexual princess. Up next is another SAWAYAMA highlight in the form of 2020 single 'Comme des garçons (Like the Boys)'.

"When I was writing this song I wanted on one hand to lyrically explore the idea of people having to adopt negative male tropes to appear confident, whilst on the other sonically paying homage to the early 2000s dance tracks that made me feel confident," Rina said at the time of its release.

"The idea that the socially acceptable version of confidence is in acting 'like the boys,' otherwise as a woman you get called a bitch - but in the club, we reclaim the word 'bitch' as a sign of ultimate confidence ("yes bitch," "work bitch"). I wanted to sit these two together and make a club fashion banger that makes you feeling like THAT bitch whoever you are."

She succeeded, with the song sounding unbelievable live, adding couture disco, funk, synth-pop, house and more to the recipe. 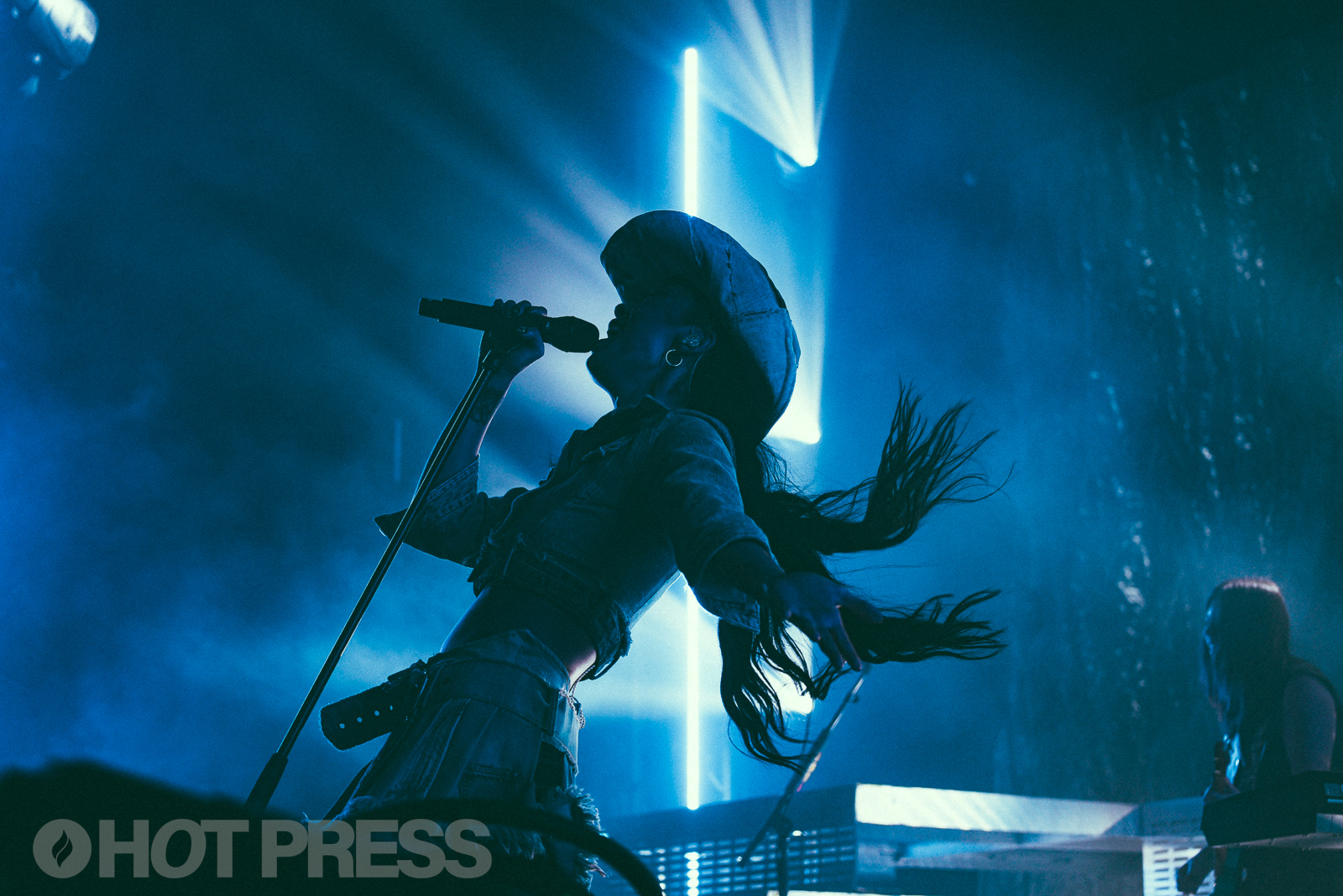 "Given that we all know global climate change is accelerating and human extinction is a very real possibility within our lifetime it seemed hilarious to me that brands were still coming out with new makeup palettes every month and public figures were doing a gigantic house tour of their gated property in Calabasas in the same week as doing a ‘sad about Australian wild fires’ Instagram post," Rina wrote in 2020 of the track.

"We’re all hypocrites because we are all capitalists, and it’s a trap that I don’t see us getting out of. I wanted to reflect the chaos of this post-truth climate change denying world in the metal guitar stabs that flare up like an underlying zit between the 2000s R&B beat that reminds you of a time when everything was alright."

It's like if Evanescence merged with Christina Milian (or Aguilera, for that matter).

Finally, it's time for 'This Hell' - the iconic county-pop hit of Hold The Girl. Cutting the crowd in half for a chant competition ("Got my invitation to eternal damnation" versus "Get in line, pass the wine, bitch, we're going straight to Hell"), the banger interpolates ABBA, tips its hat to Shania Twain and Paris Hilton, and indulges in pop feminist sloganeering (“Fuck what they did to Britney/To Lady Di and Whitney”). A gnarly hair metal guitar solo is the cherry on top. It's the ideal end to a stomping 90 minute-set that cements the love of her dedicated fandom in Ireland.

Reaching out to her inner child, Rina moves listeners simultaneously to tears and the dance floor with Hold The Girl.

Listen to Hold The Girl below.

Live Report: Carly Rae Jepsen brings glittery, infectious pop to Dublin's 3Olympia Theatre
Live Review: Des Bishop brings laughter and tears to the 3Olympia Theatre
Bono – Stories of Surrender in Dublin: "Why would he put himself through this? Now we knew…"