Iconic drummer and vocalist Richie Ramone brought his brand of punk-rock to Dolan's Warehouse, alongside his exceptionally talented band.

It's not every day the opportunity to see a Ramone in the flesh comes around. So, when it was announced that Richie Ramone would be bringing his Not Afraid tour to Limerick, I wasn't passing up the chance.

One of only four surviving members of the band, Richie was the only Ramones drummer to be credited as the sole composer and writer of any Ramones song, writing six in total. He was also the only drummer to have sang lead vocal for the Ramones on tracks '(You) Can't Say Anything Nice' and the unreleased 1985 demo 'Elevator Operator'. Despite only serving five years in the band, Richie played thousands of shows, and enjoyed close friendships with songwriter/bassist Dee Dee Ramone and Joey Ramone, who was even quoted to have said that Richie "saved the band as far as I'm concerned. He's the greatest thing to happen to the Ramones. He put the spirit back in the band."

Richie penned the Ramones' hit track 'Somebody Put Something in My Drink' which features on the Ramones Mania album, the first Ramones album to go gold. He also wrote tracks 'Smash You', 'Humankind', 'I'm Not Jesus', 'I Know Better Now' and '(You) Can't Say Anything Nice'.

The drummer and vocalist eventually left the Ramones in 1987 after conflicts surrounding merch profits and reimbursement. He has stayed involved in the music scene, eventually going solo and releasing albums Entitled in 2013 and Cellophane in 2016.

Now in his mid-60s, Richie continues to tour and release music - with his latest single 'Not Afraid' giving the title to his current international tour.

Presented by Bad Reputation, Richie took to the Dolan's Warehouse stage on Wednesday, September 14, supported by Theme Tune Boy and The Dangerfields.

First to the stage were local Limerick band, Theme Tune Boy. Polished and confident, the band steadily moved from one track smoothly into the next. While they spoke very little during their set, what they did have to say was hilarious. Personal highlight of their setlist was 'The Theme From Friends' - a track which spoke about how much the band hate the opening song to the American sitcom 'Friends', even sampling the tune during the song. The group managed to cross Drop Kick Murphy's with a heavier punk sound - making for an exciting, heavily Irish-sounding mix. Exceptional guitar riffs and drum beats fronted their set, only seconded by how exceptionally cool the band looked. If you haven't heard of them - check out their 2012 release Return Of The Living Dead, you won't regret it.

Following the Limerick lads were The Dangerfields, the Belfast-based band. Fronted by drummer and lead vocalist Andrew Griswold, the band has gone through many line-up changes, with resident Rob Karloff on guitar and guest bassist Shaun Quinn appearing for the Limerick gig. One thing this band is certainly not lacking is stage presence. Griswold's ability to drum a heavy skate-punk set while singing was phenomenal.

The three-piece were a lot heavier than I was expecting, with a true modern punk sound despite the length of time the band's been around. Playing a combination of tracks from their 2005 album Born To Rock, and new, unreleased work, Griswold let fans know that they will be releasing a new album for the first time in 17 years in the coming few weeks. After their exceptional support performance, I'll definitely be giving the forthcoming album a listen.

On bass, Clare Misstake played in the band AntiProduct for the first part of this century. Prior to this, a long time Ramones fan, she is well known as the founding member of the UK all-girl Ramones tribute band The Ramonas. Finally, the multi-talented musician also has a one girl band called NOiZEE. Ronnie Simmons on guitar did his homework.

A vision of classic Ramones, the musician first shared the stage with Ronnie at his first USA performance on stage in Hollywood covering ‘Something To Do’ together. After touring the USA and the world in numerous bands as a hired gun, Ronnie went on to join Richie’s band in 2016.

Finally, Chris Moye fills the spot of drum tech and secondary drummer for the band. Chris played in numerous Houston Punk bands before joining Richie. Among these was a Bad Religion cover band featuring members of 30 Foot Fall and DieFast, a band from Tod Waters, founder of Spunk, and the fashion designer who outfits Möetly Crüe. 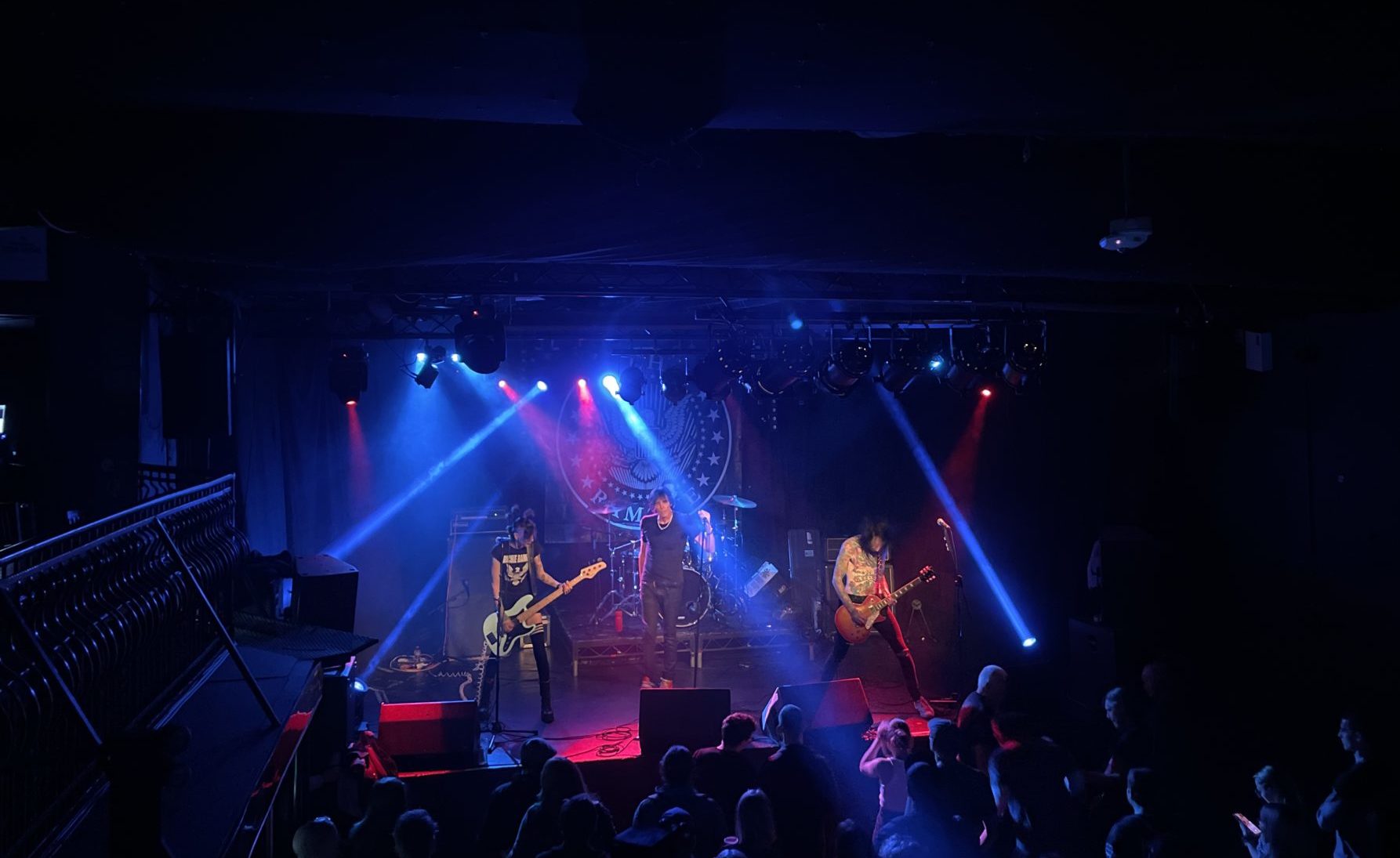 The punk-rockers opened with emblematic Ramones' tracks 'Durango 95', 'Teenage Lobotomy', and 'Somebody Put Something in My Drink', it was clear that the enigmatic drummer/vocalist still has it. Bassist Misstake and Guitarist Simmons clearly love what they do - with Simmons performing some impressive acrobatics and jumps while playing. At this point, secondary drummer Moye took over so Richie could get to the front of the stage for some crowd interaction. Surprisingly the rocker's first time in Limerick, he thanked the fans and his support acts.

The band moved through a solid blend of Ramones tracks and Richie's solo work before getting to one the musician was sure everyone could sing along to. The roof lifted clean off Dolan's as the band blasted into 'Blitzkrieg Bop'. "Hey Ho, Let's go," echoed around the warehouse as the icon let the crowd sing the chorus for him.

A well-oiled machine as a collective - Richie let the bassist and guitarist take over the stage at respective times, messing with Simmons throughout the show. Still jumping and dancing around the stage, Richie performs like a much younger man. 'The Last Time' is a new track from the musician, written about a friend who passed recently, which was beautifully performed to a restrained, respectful crowd. 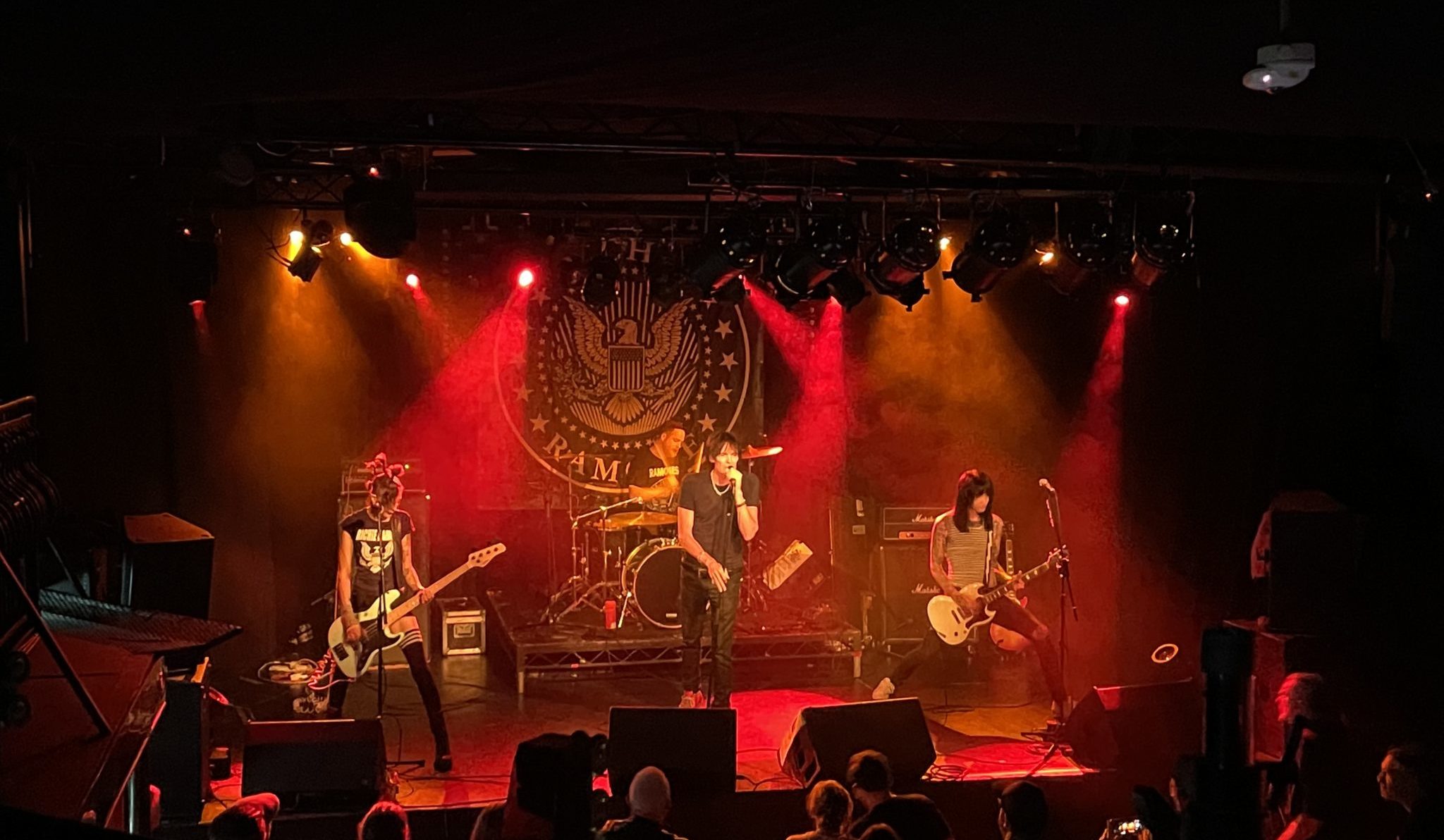 Even though the cover does feature on Cellophane, I was not expecting to hear Richie's punk cover of Depeche Mode's 'Enjoy The Silence' at this gig. I was delightfully surprised. This cover puts a heavier sound on the '90s track, a perfect fit for the rockstar.

Richie returned to the drums to close out the set with tracks 'Chasing The Night', and 'Animal Boy' assisted on vocals by Simmons - who provides a much more metal sound.

With the crowd demanding an encore - the band returned to the stage for a final time, closing out their Dolan's visit with 'Wart Hog', 'Not Afraid', and the famous Ramones track 'Sheena Is a Punk Rocker'.

The entire show was excellently executed. with seamless transitions from one track to the next. Richie's vocals have aged like a fine wine, with incredible backing from out-of-this-world guitar by Simmons and indescribable bass from Misstake. Filling in for one of the most well-known drummers of all time, Moye held his own and laid down some fantastic drum beats.

Richie spent a good portion of the set interacting with fans, bending down to shake hands and give hugs, and this didn't end with the set. The rock god took time after the show to sign autographs, take pictures, and chat to fans.

Despite being a punk icon from one of the biggest bands of that time, he's still clearly very humble, with huge time for his fans. With unbelievable vocals from Richie, alongside incredible musicianship from the entire band, it's obvious how he made the mould that so many bands still follow.

Check out his latest singles 'Not Afraid' and 'Cry Little Sister' below.